Jack and Lauren Grandcolas. Lauren and the couple's unborn child were killed on Flight 93 on September 11, 2001.

Jack Grandcolas has found himself trying to come to terms with not only the death of his wife, but the loss of their child.

(Shanksville) — A young girl clutched her grandmother’s hand as they walked past a series of tall, polished marble stones.

Forty individual slabs stand together, like silent sentinels, overlooking a quiet field and hemlock grove. Each has a single engraved name in black.

But one caught the child’s eye. It was the only one that includes a name with the inscription: “and unborn child.”

“That means the woman was pregnant when the plane crashed,” the woman told her granddaughter as they walked away from the Wall of Names at the Flight 93 National Memorial.

Passenger Lauren Grandcolas was three months pregnant when the hijacked jetliner crashed on September 11, 2001, in Stonycreek Township, Somerset County. It went down about 100 yards from where the Wall of Names now stands.

For the last two decades, her husband, Jack Grandcolas, has found himself trying to come to terms with not only her death, but the loss of his child.

A child he would never hold. 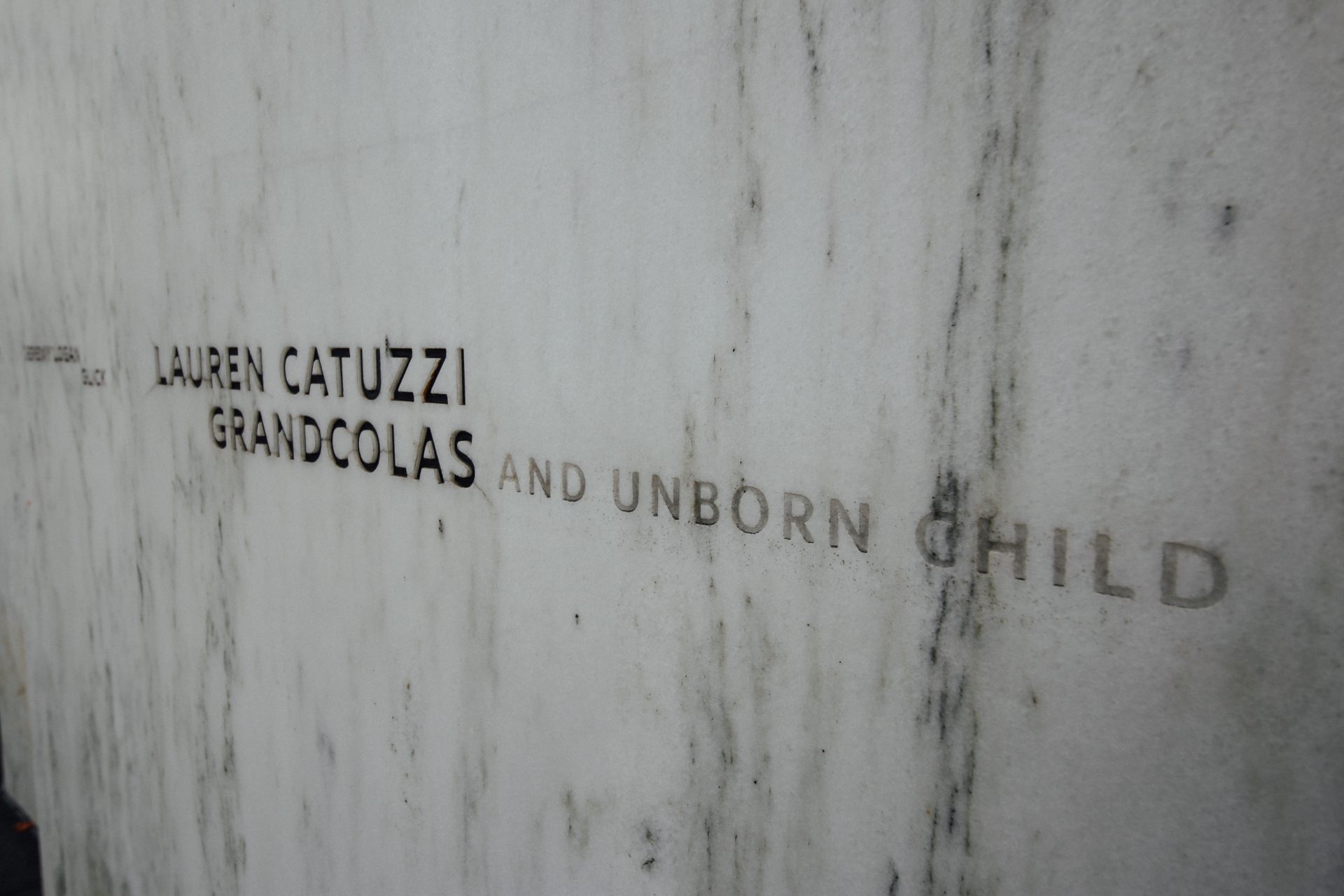 Lauren Grandcolas was three months pregnant when Flight 93 crashed near Shanksville on September 11, 2001.

Jack was asleep at their home in San Rafael, California, the morning of September 11, 2001, while Lauren was preparing to fly home from her grandmother’s funeral in New Jersey.

He had slept through her first call explaining she had booked a standby seat on an earlier nonstop flight from Newark.

Lauren, a 38-year-old consultant and writer, was one of 10 passengers and crew members who picked up last-minute tickets or had their schedules changed to work the cross-country journey.

At 9:39 a.m., she called again. It was about 11 minutes after four terrorists seized control of the 757. But, her tone wasn’t much different. It was calm. Composed. It’s clear she didn’t want Jack to worry.

“Honey, are you there?  Jack? Pick up sweetie.  Okay, well I just wanted to tell you I love you. We’re having a little problem on the plane. Umm. I’m totally fine. Umm. I just love you more than anything,  just know that.  And you know, I’m, you know, I’m not uncomfortable and I’m okay… for now. Umm. It’s just a little problem. So, I’ll a….. I just love you. Please tell my family I love them too. Bye, honey.”

When Jack woke up around 7 a.m. on the west coast, a battle raging on Flight 93 over the skies of Pennsylvania, was nearing its end. The passengers and crew were fighting for control of the 757. It plummeted to the earth at 563 mph just three minutes later.

Jack didn’t know about anything that was unfolding on the east coast. He was still a bit groggy as he glanced out the window.

Something caught his eye.

“I remember just kind of looking out at the sky and seeing this very unusual image kind of going upwards,” he said. “I thought, ‘Who do I know that just passed?’ Because it looked like an angel.”

He soon learned about the devastation in New York and at the Pentagon. His first thought was about his older brother who was a pilot for American Airlines. 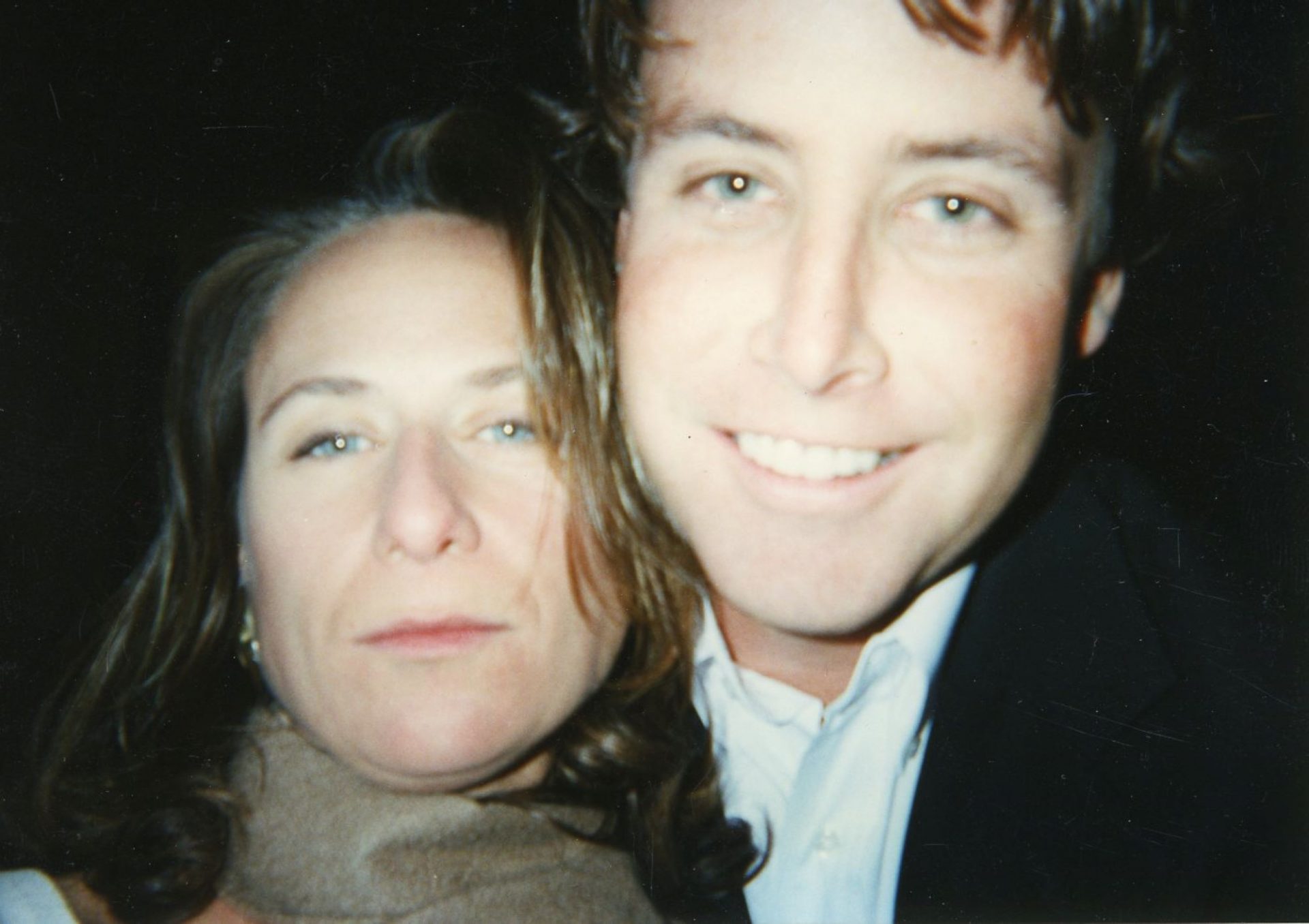 Jack and Lauren Grandcolas. Lauren was three months pregnant when she died onboard Flight 93 on September 11, 2001.

Then, Lauren’s sister called. There was a hint of panic in her voice about Lauren catching an earlier flight.

Jack saw the blinking red light on the answering machine.

“It just started to sink in as (Lauren) was talking, that what she was trying to do was protect me, if things didn’t work out,” he said. “It was a kind of a message in a message. She stopped herself twice when she said ‘I’ll,’ as we all do like to say, ‘I’ll call you back.’ Because she wasn’t sure.”

Images on the news showed another plane crash. This time near Shanksville, Pennsylvania. Jack saw the smoking crater and burned trees.

No one could have survived that, he thought.

United 93 was the only one of four planes seized by al Qaeda terrorists not to reach its intended target. Investigators believe the passengers and crews attempted to retake the cockpit and likely saved the U.S. Capitol as well as hundreds of thousands of lives.

“The first year is extremely painful”

Jack was crushed with grief, while details about Lauren and the rest of the passengers and crew showed up in the national news.

Those first few months were just a numb blur.

“Because after the shock wears off, the real pain sets in. That’s the longing part,” he said. “You just long for those times. I have seen it now with others who have lost loved ones dramatically and, I hate to tell them, but I say, ‘It gets worse before it gets better.’”

“The first year is extremely painful because it’s your first year with no Christmas with her,” he added. 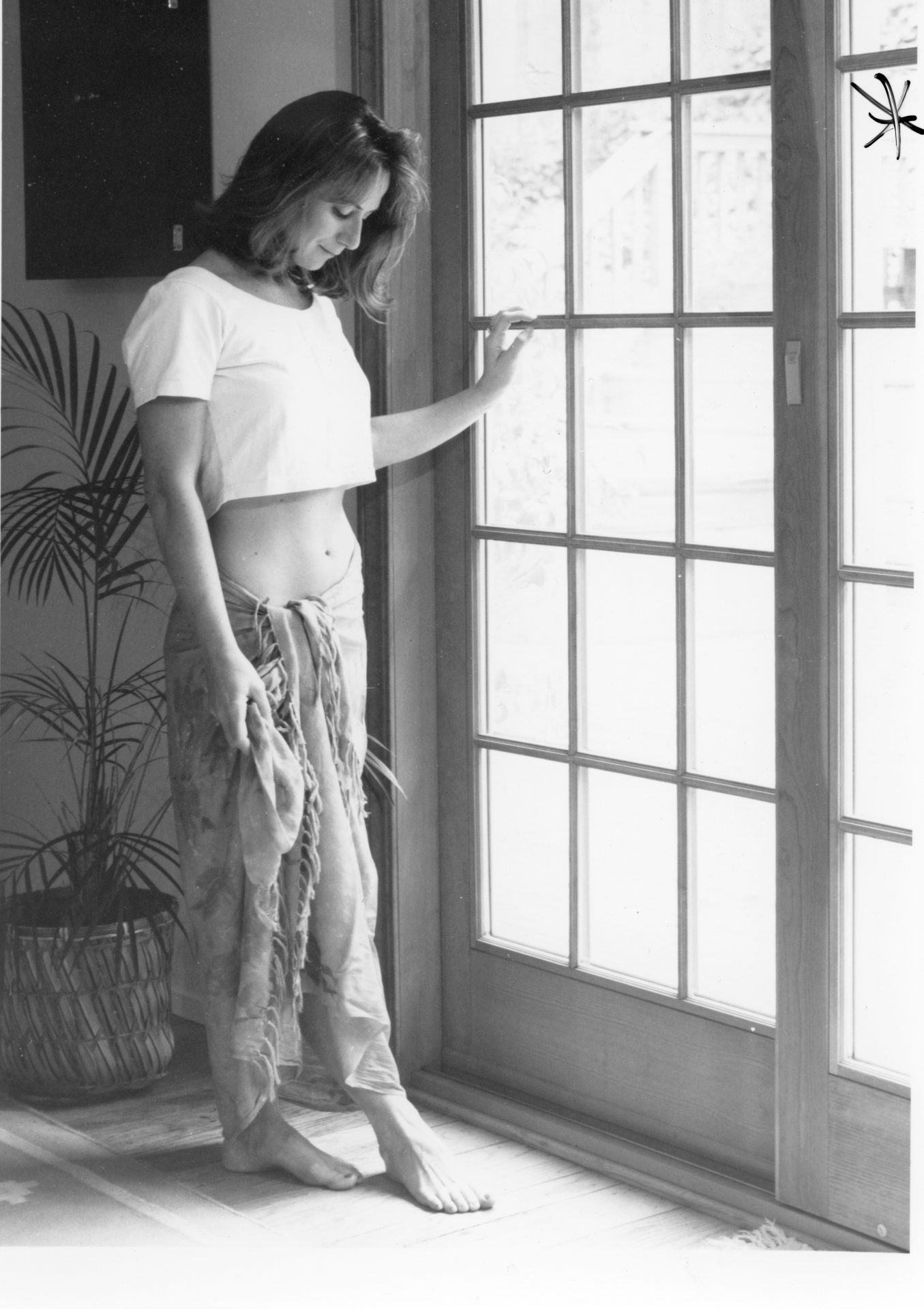 Lauren Grandcolas in an undated photo. She was killed when Flight 93 crashed near Shanksville, Somerset County, on September 11, 2001.

“I just had this sort of love at first sight, even though it would be a couple of years later that we actually first would go on our first date,” he said. “She was a vibrant soul. Really knew how to handle herself in situations.”

They had met at the University of Texas and he still hasn’t forgotten the striking beauty of her eyes. The daughter of a football coach, she went skydiving on her 30th birthday.

She was trained as an EMT.  Out on her bike one day, Lauren came across an automobile crash. She stopped, checked the driver’s vital signs and took control of the scene until an ambulance arrived.

Going to Shanksville had created a sense of healing and community for several Flight 93 families, but Jack realized it just wasn’t doing that for him.

He had visited the crash site in the immediate aftermath of 9/11 and then went to a couple of remembrance ceremonies.

After a third visit to the Shanksville area, he realized it was too much.

“The pain and the sorrow was more than was healthy. It was tough because of not just my loss, but everybody’s loss. Her sisters, her parents, the other family members,” he said. “So, I vowed I would come back when (the memorial) was finished.”

It was one of several steps Jack took over the years to manage that pain, that loss. Early on, a doctor had told him he was depressed. They discussed ways to start moving forward — not too fast, but also not getting bogged down and paralyzed by grief.

“He said take care of unfinished business. And that struck me because I was stuck with what to do with Lauren’s things,” he said. “I did not want to let go of anything. I was stuck with this sort of perverse fantasy, I guess, that she might come home and still need them, but that wasn’t the case.”

So as difficult as it was, Jack picked up a lot of her clothes and jewelry and donated them to a women’s shelter where Lauren used to volunteer. 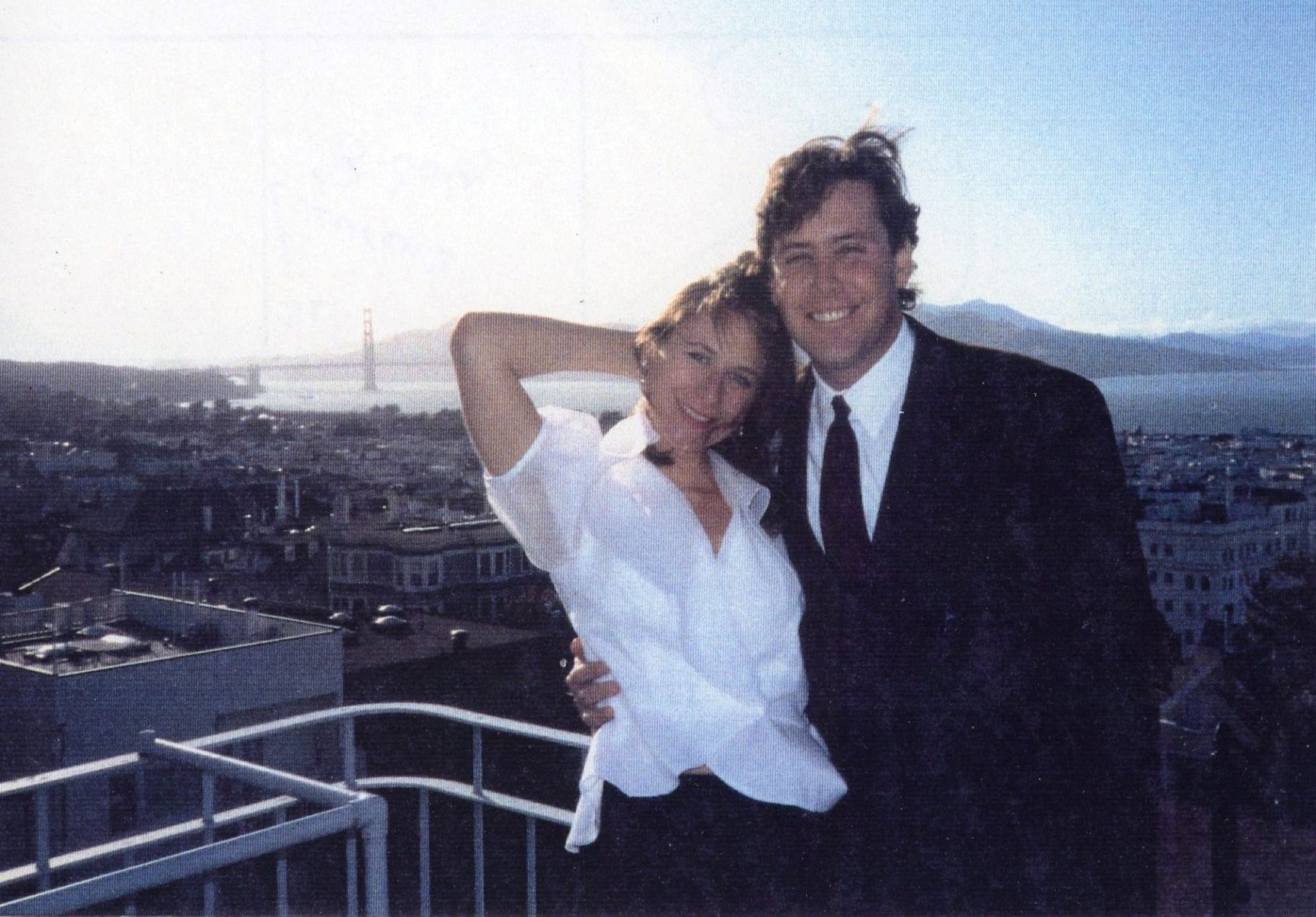 Jack and Lauren Grandcolas. Lauren was three months pregnant when she boarded Flight 93. It crashed near Shanksville, Somerset County, during the September 11, 2001, terrorist attacks.

As Jack carved out the brain space to reflect and process, he began to become more comforted by that answering machine message Lauren left him from the back of the hijacked plane.

“You know, I’ve thought about what if I had picked up the phone and gotten her call while she was on the plane. I just can’t imagine how I would’ve reacted,” he said. “She left the message on the answering machine, as opposed to me having a frantic discussion with her about the final moments of her life. I do feel that the message was a blessing.”

Jack was sure Lauren was calling with a purpose. With a specific message.

“That cryptic note was we’re going to take care of it one way or the other. We may not be successful, but we’re not going to let more carnage happen on our watch,” he said. “I believe they were starting to plan…starting to take a vote on what to do.”

Jack thought he had figured this out. He had moved forward through the depression. But at a certain point, around 2014, he admitted things weren’t all OK.

“I was going down the tunnel of despair by self-medicating. Because I was having these dreams and I didn’t want to dream,” he said. “I knew that wasn’t going to be a healthy existence.”

Jack started working through it with a therapist, who finally helped him figure out what was going on. He had come to terms with Lauren’s death. But he had never accepted — never processed — the never-to-be life of the baby she was carrying.

The baby who would have been born in April 2002.

Jack found himself biting his lip when his friend complained about something their son or daughter did and telling him he had no idea what it’s like.

He bristled with anger.

“I wanted to say, ‘You know what? You idiot. I wish I had some idea. Stop your complaining. Think for a minute what you’re saying and why.’”

He knew had to square it away in his own way. He began to write down his thoughts, and work through them. Eventually, the project turned into a book. It’s written to the never-born child.

“So I began the forward with, ‘Dear Son….or Daughter, I am writing this story by the advice of my therapist.  She thought it would be helpful to tell the story of your mom and dad. It is also a tribute to you and the day of infamy in history for which you now reside,” he said.

It’s about Jack. About Lauren. About what happened on 9/11, and what Jack thinks Lauren was doing on the plane.

“She might’ve been tapping her watch saying, ‘You know, folks, we can debate this forever, but we don’t have the luxury of time.’ She would have been involved,” he explained. “She did with so many of us, myself, her friends or colleagues, leading by example and inspiring.

“Someone asked me had I been on that flight with her, what would I have done? And I said, without hesitation, ‘I would have done whatever Lauren would have wanted me to do,’” he said. 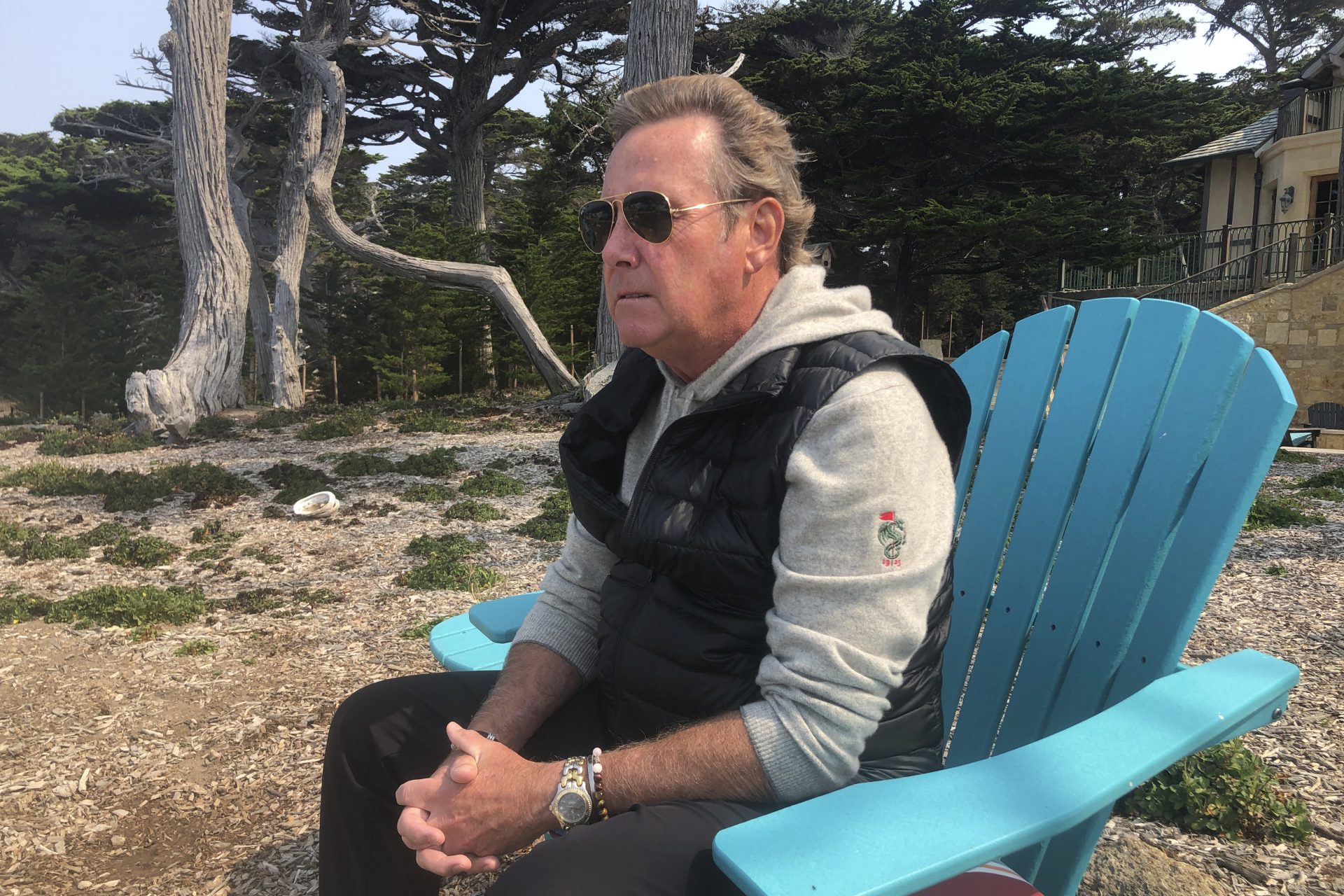 Jack Grandcolas, who lost his pregnant wife on United Flight 93, sits and looks out at the ocean near his home in Pebble Beach, Calif., Aug. 18, 2021. Twenty years later, Grandcolas still remembers waking up at 7:03 that morning. He looked at the clock, then out the window where an image in the sky caught his eye — a fleeting vision that looked like an angel ascending. He didn’t know it yet, but that was the moment his life changed.

The book takes its title — “Like A River To The Sea” — from a lyric by Lauren’s favorite band, U2. It is slated to be released in April to mark what would have been their child’s 20th birthday. He plans to donate a portion of the proceeds to a mental health foundation.

On Sept. 11, Jack will return to the crash site. He’ll see the national memorial for the first time and attend the remembrance ceremony.  The event will mark 20 years since that horrible day unfolded. Since he pressed play on his answering machine.

There’ll be some anxiety, of course, but he will follow a bit of advice he received in the days after he lost Lauren — “the only way through a storm is to meet it head on.”

Jack has moved forward with his life, eventually meeting someone new, and getting married again.

For him, embracing the remaining chapters in the book of life is the best way to honor Lauren. He’s come to accept that the present is still a gift.