FILE - In this Feb. 2, 2019, file photo, Kimberlé Crenshaw participates in the 'Reconstruction: America After Civil War' panel during the PBS presentation at the Television Critics Association Winter Press Tour at The Langham Huntington in Pasadena, Calif. Crenshaw, executive director of the African American Policy Forum, a social justice think tank based in New York City, was one of the early proponents of critical race theory. Initially, she says, it was “simply about telling a more complete story of who we are.”

What is critical race theory? Here’s a look behind the protests and how racial issues are taught in Pa.

Some people are protesting against it, even though it isn't being taught in Pennsylvania. Others are spreading incorrect information about it.

Critical race theory is the subject of discussion and protests in Pennsylvania and elsewhere in the U.S. Much of that discussion is clouded in misinformation. We encourage you to read this explainer, as it is designed to set out the facts. As we continue to cover this issue, we’d like to include more voices in our reporting. Contact us on our Trusting News page.

(Harrisburg) — “Critical race theory” has become a source of conflict in school board meetings across the country and in Pennsylvania.

In some districts, the issue is affecting school districts’ efforts to create equity policies meant to ensure students from underprivileged backgrounds and students with disabilities have equal access to resources and learning opportunities at school.

So, what is critical race theory, and what’s behind protests against it? 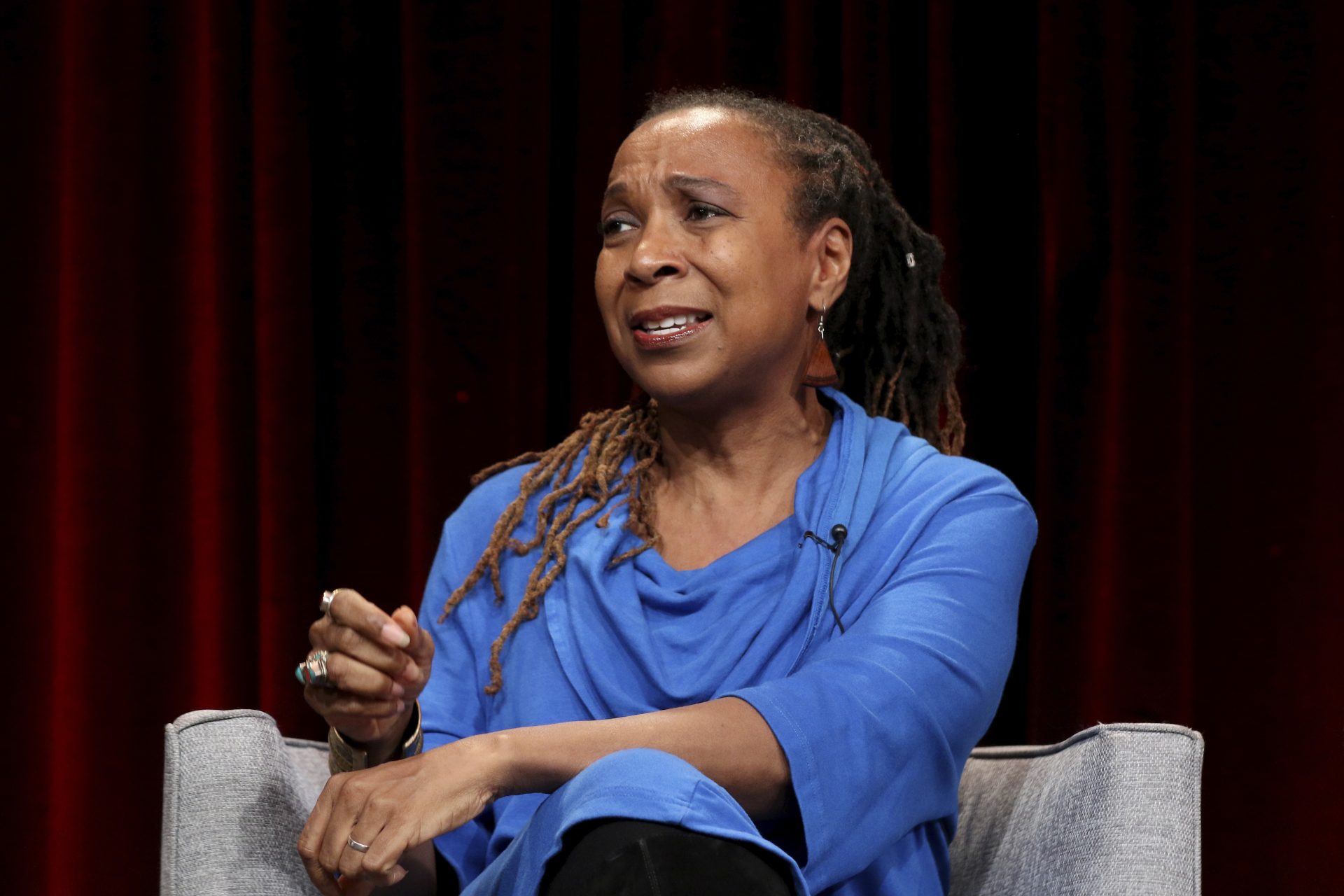 FILE – In this Feb. 2, 2019, file photo, Kimberlé Crenshaw participates in the ‘Reconstruction: America After Civil War’ panel during the PBS presentation at the Television Critics Association Winter Press Tour at The Langham Huntington in Pasadena, Calif. Crenshaw, executive director of the African American Policy Forum, a social justice think tank based in New York City, was one of the early proponents of critical race theory. Initially, she says, it was “simply about telling a more complete story of who we are.”

What is critical race theory?

Critical race theory emerged from an academic movement in the 1970s and early 1980s, led by legal scholars and lawyers Derrick Bell, Kimberlé Crenshaw, Richard Delgado, among others. The leaders of the movement began developing critical race theory

According to the American Bar Association, critical race theory is the “practice of interrogating the role of race and racism in society that emerged in the legal academy and spread to other fields of scholarship.” It holds that race is a social category shaped by human relations that shifts over time. It is a method of analysis that adapts to the society it analyzes, according to the California School Boards Association.

It also teaches that race can intersect with other identities such as gender, sexuality, class, disability or religion.

Scott Hancock, a history and Africana studies professor at Gettysburg College, has studied critical race theory for more than 20 years.

“I’d define it as a body of thought that tries to define the extent to which race and racism has shaped the United States, particularly its institutions, like legal, economic, governmental systems,” Hancock told WITF’s Smart Talk.

Is it being taught in Pennsylvania public schools?

The Pennsylvania Department of Education says critical race theory is not being taught in public schools.

Some Pennsylvania politicians have spread incorrect information, however. In a newsletter, U.S. Rep. Mike Kelly (R-16) said critical race theory is a “Marxist ideology” being taught in classrooms.

The department said in a statement that “the work of diversity, equity and inclusion” must remain “about creating educational spaces of belonging, while honoring the dignity of all students, staff, communities, and families. Theories, such as Critical Race Theory, offer viewpoints of society, however, are not something that is currently being taught through curriculum in PA schools.”

Some Pennsylvania schools have issued statements explaining that their curriculum does not include critical race theory.

Tredyffrin/Easttown School District issued a fact sheet that said it is committed to racial equity.

“This includes practicing inclusive, culturally responsive, and anti-racist curriculum and instruction at all grade levels,” according to the fact sheet. “All of this is different from teaching CRT.”

Where is critical race theory taught?

Critical race theory is a concept introduced in college-level courses.

Cynthia Young, associate professor of African American studies, women’s, gender and sexuality studies at Penn State, says critical race theory analyzes how our legal systems and founding documents positioned people of different races. Being able to think about race as a social construction that intersects other kinds of identities requires a level of analysis that most students develop at a college level.

Young said she has never encountered a college-level course that is teaching critical race theory in isolation. People use texts or concepts to teach in all kinds of courses, she said.

In Pennsylvania, each school district or charter school determines the content within its curriculum.

Pennsylvania students are required to demonstrate knowledge and skills outlined in the Pennsylvania State Academic Standards, which includes civics and history standards. Those standards do not propose specific content, but they do maintain that students should study the “social, political, cultural and economic contributions of groups and individuals” in Pennsylvania, United States and World History.

Some of the teaching resources included in the Standards Aligned System discuss topics on Black history in the United States. For example, they include a reading about the WWII Tuskegee Airmen that can be taught from 6th to 12th grade.

Anyone concerned about how the standards are covered in their school district can appeal to their school board, said Kendall Alexander, a Department of Education spokesperson.

Why do schools have equity policies and how do they differ from critical race theory?

The Department of Education defines equity as “every student having access to the resources and rigor they need at the right moment in their education across race, gender, ethnicity, language, disability, religion, sexual orientation, gender identity, family background and/or family income.”

The term critical race theory is not mentioned.

‘Misunderstandings about Critical Race Theory have caused the label “CRT” to be used to alarm, attack and undermine important efforts by public school systems to promote equity in their programs.’ — Pennsylvania School Boards Association

The decision to implement equity policies are made at the district, not state, level. The Department of Education offers an Equity and Inclusion Toolkit in response to “rising acts of hate and violence occurring throughout the commonwealth” to guide districts in the creation of their policies.

There is an equity requirement under the federal Title 1 of the federal Every Student Succeeds Act, which aims “to provide all children significant opportunity to receive a fair, equitable, and high-quality education, and to close educational achievement gaps.”

The state education department monitors schools for compliance of Title 1 and checks that impoverished and minority students are not more often taught by unqualified or less experienced teachers.

A fact sheet from the Pennsylvania School Board Association states that “school districts, under state and federal education laws, are responsible for ensuring that factors arising from race, ethnicity, gender, class, disability, homelessness and other circumstances do not limit any student’s ability to access and benefit from district programs.”

What is the relationship, if any, between those “equity policies” and the curricula that students are taught?

Curricula can be evaluated under an equity policy to make sure they include the perspectives of different racial and ethnic groups.

Amber Sessoms, an education consultant and certified school psychologist, says equity policies put forward the idea of “culturally responsive teaching,” which often is falsely associated with critical race theory by parents who oppose the implementation of equity and diversity plans.

Culturally responsive refers to practices and teaching materials that “center students’ culture, identities, and contexts throughout educational systems,” according to a curriculum scorecard developed by the New York University Metropolitan Center for Research on Equity and the Transformation of Schools.

“Curricula that only reflect the lives of dominant populations — for example, White people and culture, nuclear families, or able-bodied people — reinforce ideas that sideline students of color, linguistically diverse students, single parent/multi-generation/ LGBTQ+ led families, and students with disabilities,” according to the scorecard.

Do people object to to elements of Pa. curricula that teach about race, slavery, civil rights and similar issues ?

The memo includes a quote from Martin Luther King Jr. about people being judged “not by the color of their skin but by the content of their character” in making the case for “legislation to prohibit the teaching, funding, or dissemination of racist and sexist concepts.”

No Left Turn in Education is one of the organizations opposing critical race theory and what it perceives to be political indoctrination in schools. It has chapters across the country, and describes itself as a “grassroots movement of common-sense parents.” 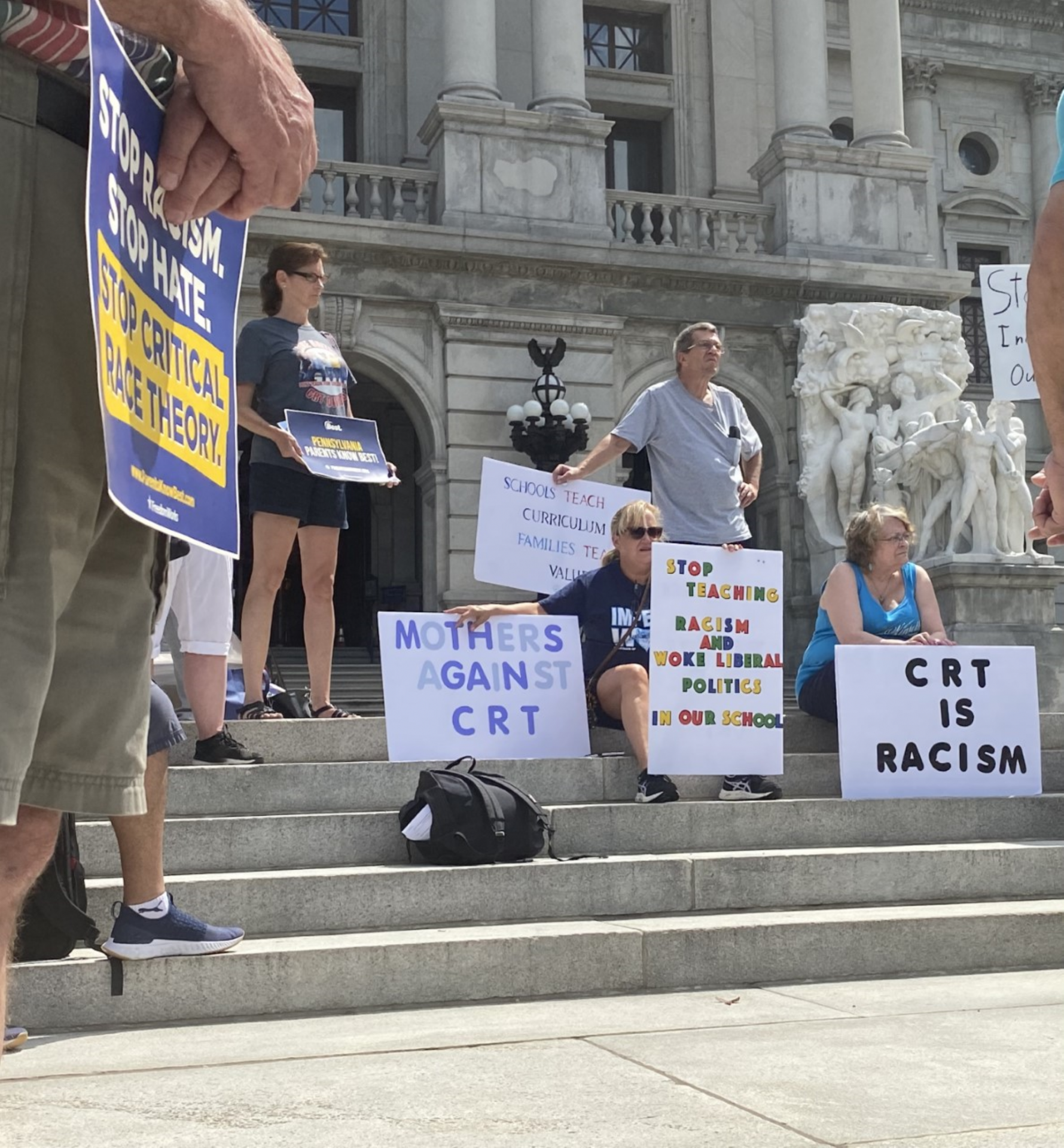 The Pennsylvania chapter held a rally with about 50 people in front of the state Capitol in July.

Speakers at the rally said critical race theory “blames” or “shames” White students, and advances the idea the United States’ history was founded upon slavery and the oppression of other racial and ethnic groups.

Some who oppose critical race theory say they are not against equity policies or teaching history or Black history, according to opponents’ websites and speeches at the Harrisburg rally.

How is opposition to critical race theory, and the misinformation surrounding it, playing out in schools and among educators?

In response to parents’ accusations of “CRT indoctrination,” the Pennsylvania School Boards Association has expressed concern about the effect of misinformation regarding critical race theory.

“Misunderstandings about Critical Race Theory have caused the label ‘CRT’ to be used to alarm, attack and undermine important efforts by public school systems to promote equity in their programs,” PSBA said in its fact sheet.

The National Association of School Psychologists say that divisive rhetoric on diversity and inclusivity could undermine a positive school environment.

“Students are paying attention, and the divisive rhetoric and intentional misrepresentation of CRT is causing confusion and disruption and could undermine a positive school climate when students return in the fall,” the National Association of School Psychologists warned in an article.

In Central York High School, the principal sent out of a list of anti-racist literature that is banned from being taught in classrooms, the York Dispatch reported. The list of resources was originally produced by a diversity committee.

Sessoms said that because some opponents of critical race theory use the phrase to refer to anything that addresses racism or racial elements of U.S. history, teachers could back away from teaching those concepts.

Pa. Republican lawmakers and the U.S. Capitol attack
As part of WITF’s commitment to standing with facts, and because the Jan. 6 attack on the U.S. Capitol was an attempt to overthrow representative democracy in America, we are marking elected officials’ connections to the insurrection. Read more about this commitment.
U.S. Rep. Mike Kelly supported the attempt to keep Donald Trump in power by voting against certifying Pennsylvanians’ legal votes for President Biden, and by signing on to a Texas lawsuit that would have invalidated votes in Pennsylvania, Michigan, Georgia and Wisconsin. State Reps. Jim Cox and Barbara Gleim supported Trump’s election-fraud lie by signing a letter urging members of Congress to object to Pennsylvania’s electoral votes going to Joe Biden. The election-fraud lie led to the attack on the Capitol.