Part of Flight 93 crashed on my land. I went back to the sacred ground 20 years later

By sheer chance, fate, coincidence — whatever you'd like to call it — my family's history is a small footnote in the story of Flight 93.

Almost every step led to a snap or a soft thwack.

Fallen branches cracked under my feet. Ferns brushed up against my calves.

This past June, I was with my reporting partner Scott Detrow searching for something in this grove of hemlocks.

Somewhere in this swirl of skinny, yet towering trees was evidence of scars from a day long ago — a spray painted “X” on the bark. This stark landmark meant a tree had been climbed and searched.

In my head, I knew I should fix my gaze just above the base of each one. But I found myself slipping into an old habit. I was looking down. My eyes methodically scanned the ground — left to right, right to left, repeat. 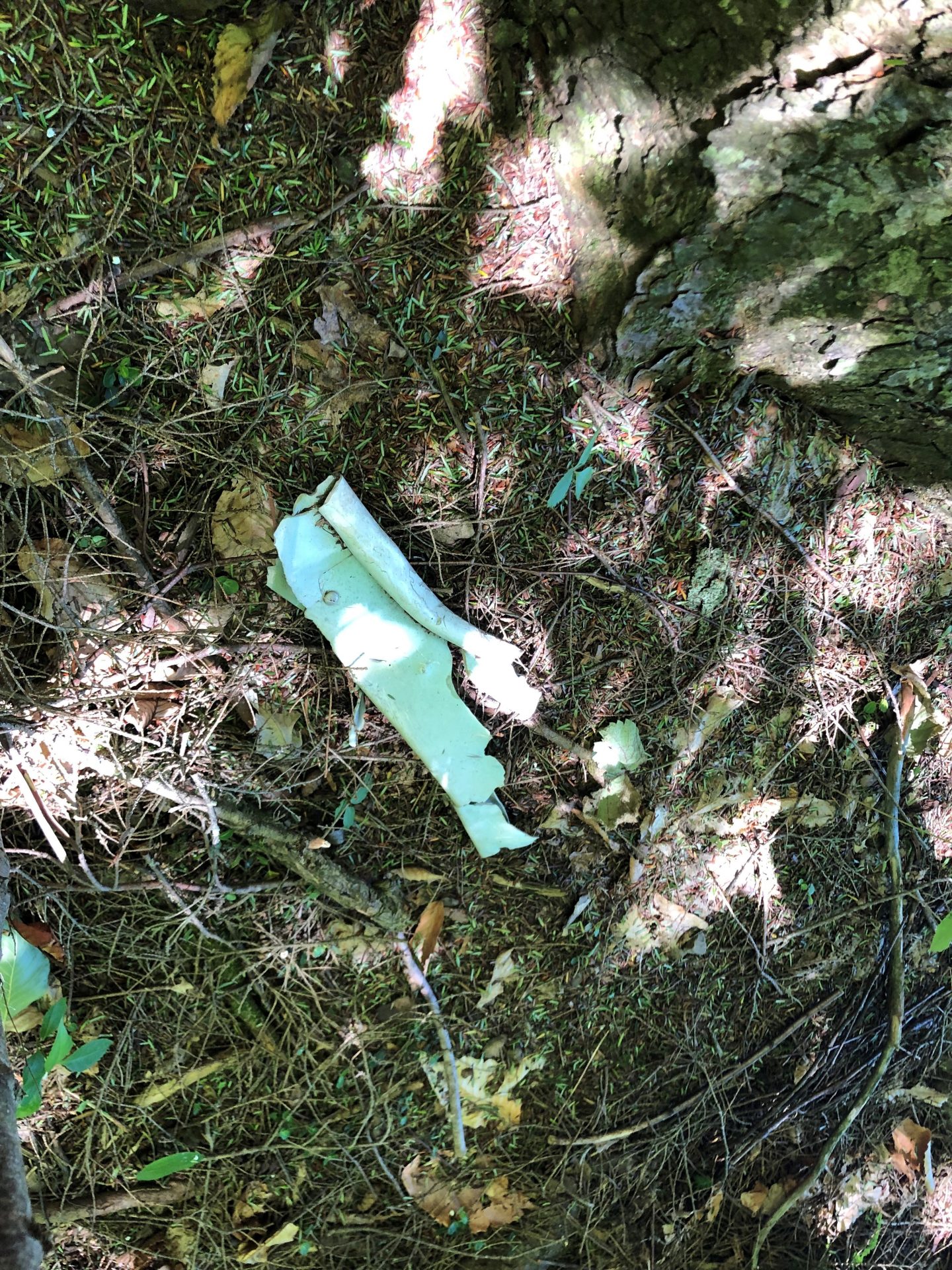 Metal debris from Flight 93 found this year on the grounds of the national memorial.

Then, I saw something.

Right at the base of a towering hemlock was a jagged, twisted, piece of metal. It stretched from the middle of my forearm to the tip of my middle finger.

I picked it up and stared for a minute or so. Maybe a foot in length, it had weight to it. I felt my throat tighten and my heart speed up. I thought I might break down. I had to slow my breathing to collect myself.

I gently placed the relic back in the dirt.

Nearly 20 years after the September 11th terrorist attacks, I was looking at a physical reminder of what was left of United Flight 93.

The wooded area I was trudging through belongs to the National Park Service. It is part of the Flight 93 National Memorial, which opened a decade ago. It can only be visited by family members of the 40 passengers and crew of the doomed flight. They can also bring guests with them. 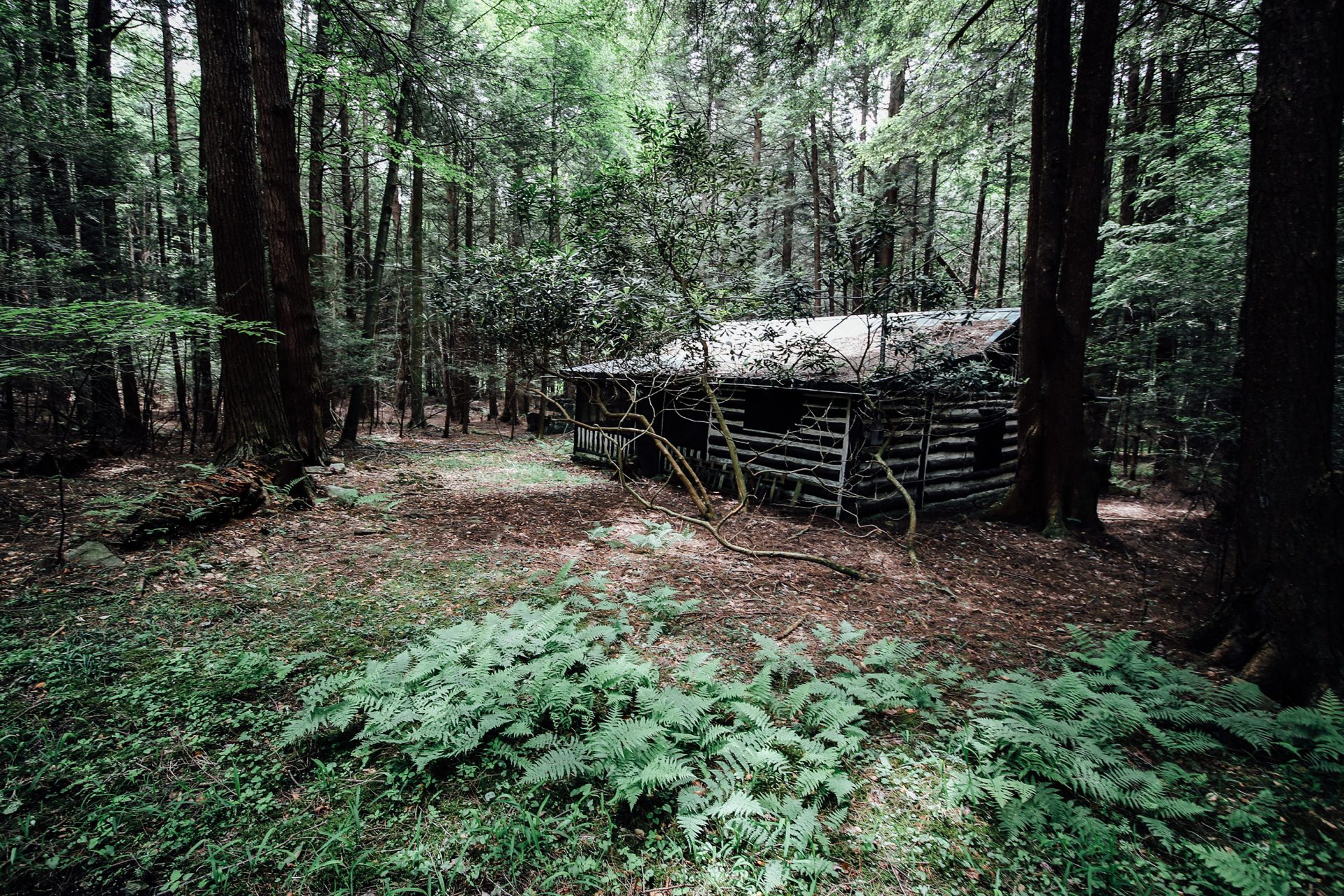 A log cabin that was built by Tim Lambert’s grandfather. Part of the woods belonged to the family for more than 70 years.

But for nearly 70 years, 163 acres of this land belonged to my family. My grandfather bought it in the 1930s, then passed it to my dad who passed it to me. As a child, I spent summer days in these woods, picking blackberries and fishing. Sometimes I’d check out the log cabins on the land, cabins my grandfather had built by hand.

They are still there, another relic of a time past.

So by sheer chance, fate, coincidence — whatever you’d like to call it — my family’s history is a small footnote in the story of Flight 93.

In the weeks after 9/11, Americans struggled to get their heads around the horror of that day. There were so many terrible images playing on a loop. The plane hitting the second tower. The “missing” posters plastered over lower Manhattan. The collapsed side of the Pentagon.

But near Shanksville, there were no looping images. There was just a burned out pit in a field and a charred line of trees.

That image was misleading. The site itself told a different story.

I saw the crash site up close for the first time just three weeks after United Flight 93 went down. I’d come at the invitation of the county coroner, Wally Miller. He was going to let me see a space that had been hidden from public view since the day of the attacks. When I stepped from my car into the chilly fall air, it hit me.

The overpowering smell of jet fuel. 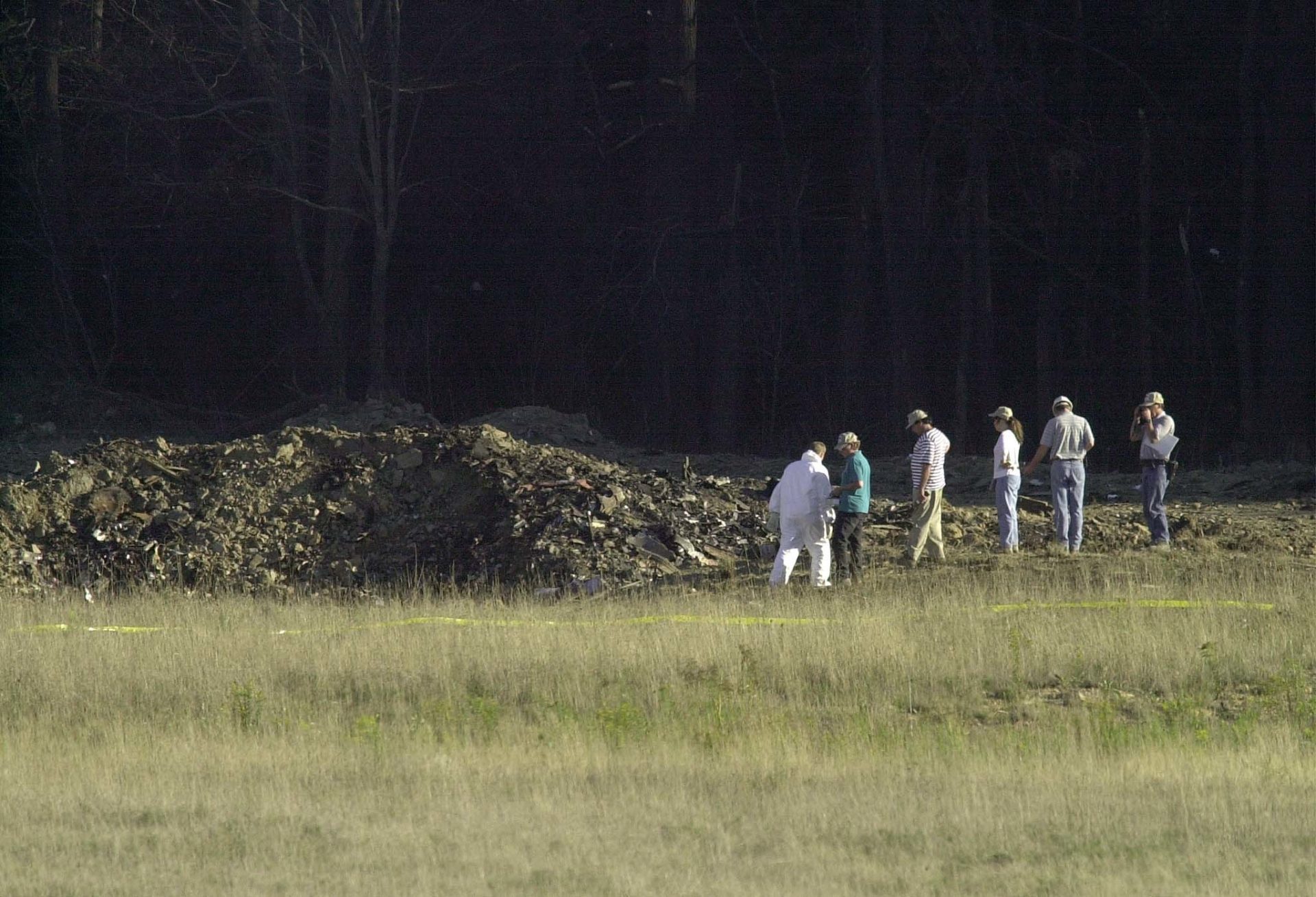 Three weeks had passed, but the smell still filled my nostrils — think about how your hands sometimes smell after pumping gas and then times it by ten.

Our grove of hemlocks had been hollowed out into the shape of a “U,” after absorbing the blast from the crash. The high grasses and deep green ferns were gone. Now, there was just barren, bulldozed dirt and random piles of downed trees. I knew dozens of the remaining hemlocks — burned like matchsticks — would not survive long.

Miller was wearing a blue hard hat, grey coveralls and an orange vest. He described what investigators had determined about the crash.

He bent down and picked up a piece of metal that may have been the size of a quarter. 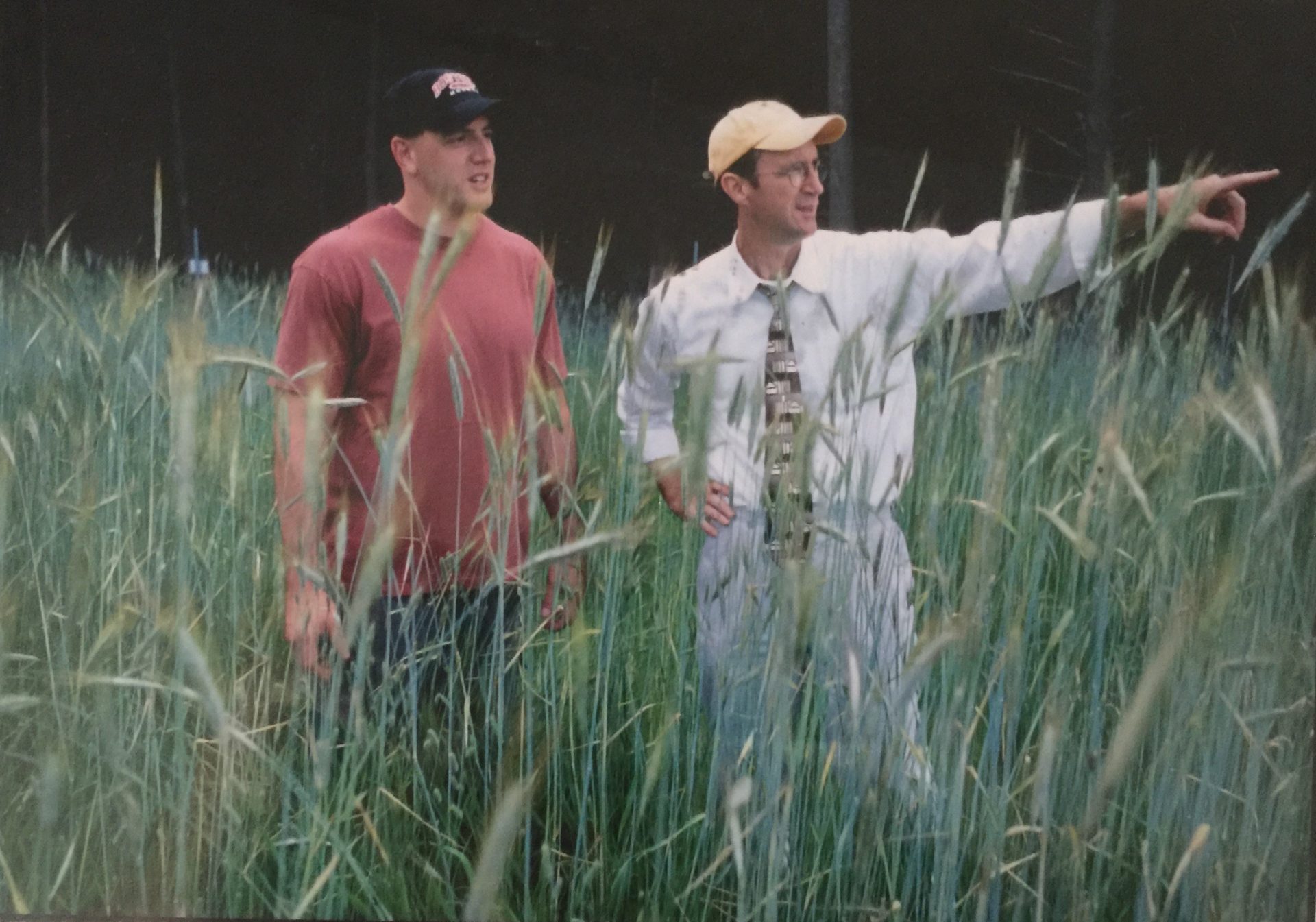 It was like a camera shutter clicked. Things that didn’t catch our eye earlier suddenly came into focus.

Debris was all around us.

Flight 93 was all around us.

It was like confetti of metal. Tiny pieces were everywhere — each small enough to fit in the palm of my hand.

I picked up a singed envelope that appeared to be a wedding invitation. My colleague held a burned piece of luggage. Charred pieces of a paperback book slowly drifted by as a breeze picked up.

Another strong whiff of jet fuel.

The land and United 93 were entwined.

I climbed up a black metal container to peek inside. Piles and piles of wire, damaged circuit boards. Twisted pieces of large metal. A stray flip-flop. A lone tie.

Someone had written on two pieces of tape on the front of it — “THIS IS NOT TRASH,” and “PLANE PARTS ONLY!!”

A container labeled “plane parts only” collected debris from the crash in 2001.

I was back in Shanksville five years later at the request of Debby Borza. Her 20-year-old daughter Deora Bodley was the youngest passenger on United 93.

The first years after the crash, I’d made many trips back and forth to my land. I went as a journalist to chronicle a story to which I had a front row seat. But I also went to help. So I spent hours combing through the woods with Wally and others, picking up plane parts, noting which trees had been searched, indicated by big red X’s. I grew close to some families, close enough that during one visit, Debby threw me a birthday party at a restaurant a few miles from Shanksville.

This time when I stepped out of the car at the crash site, the air smelled like sugar maples and wildflowers. The ground was healing.

I walked through the security gate set up to keep trespassers out and was greeted by Debby. Ben Wainio and his wife Esther Heymann were with her. They’d lost their 27-year-old daughter Honor Elizabeth on Flight 93.

It was still early. The morning air damp and hazy. 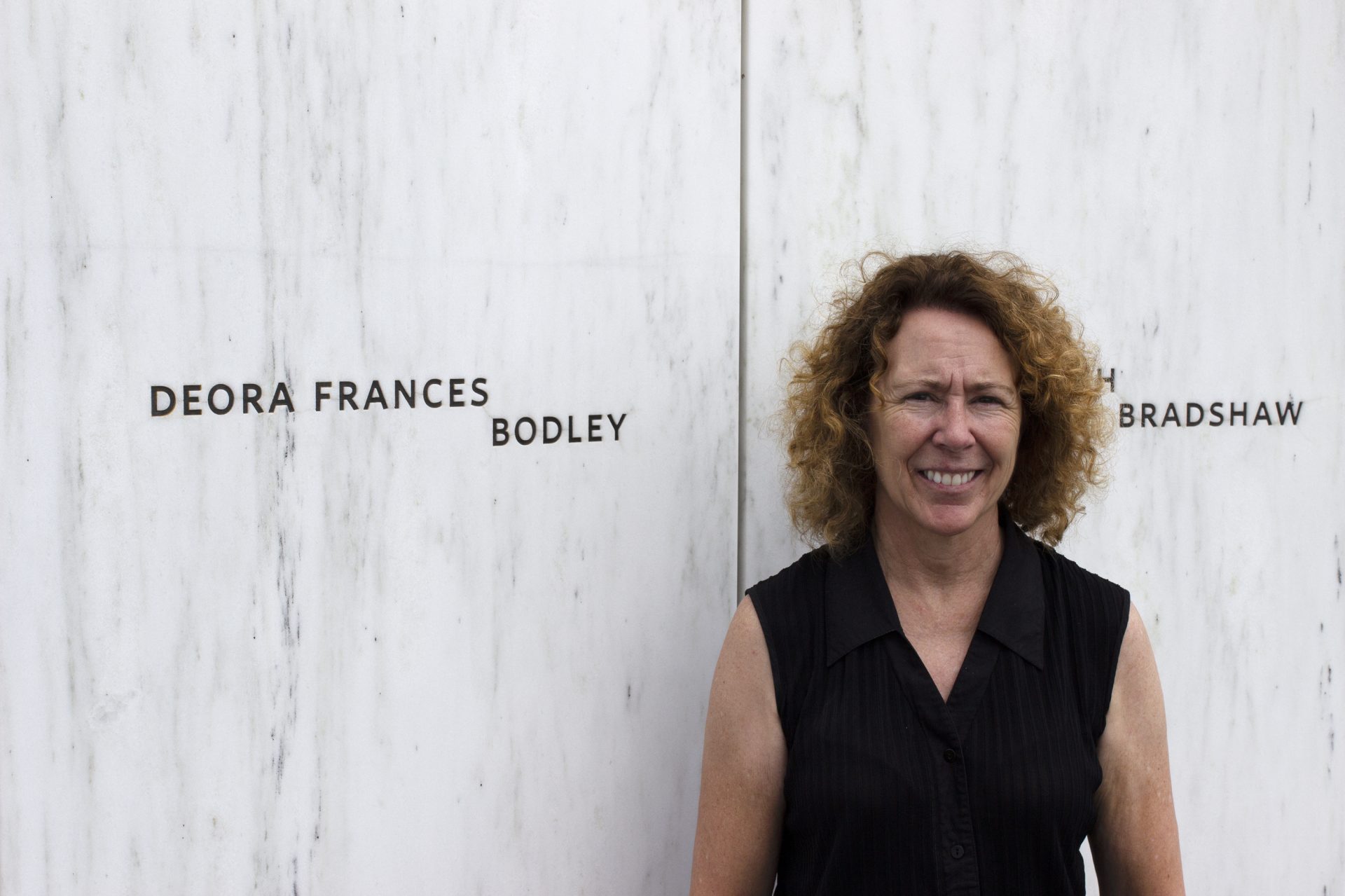 In 2016, Debby Borza stands next to a memorial for her daughter, Deora Bodley, who was the youngest passenger on Flight 93.

The crash site, once so brown, barren and charred was now a vibrant green. The grass was back, tall and lush, and so were the wildflowers. The surviving hemlocks stood tall, although they still bore scars from that day, missing branches from base to canopy.

As we stood together that morning, steps from where the plane had hurtled into the ground five years before, we talked about the land and the connection families now felt to it. Ben told me he felt like he’s here with Elizabeth. Esther said she found it poignant that something so sad and tragic could happen in this random, peaceful landscape. She found it cathartic to bring a lawn chair to sit for hours in solitude and peace.

This spot was a cemetery. The final resting place of their loved ones.

But, reminders of the devastation from the September day still surfaced. I came across a large piece of insulated wiring resting at the base of a tree.

The land was still telling the story of Flight 93. But it was also healing — just like some of the families. 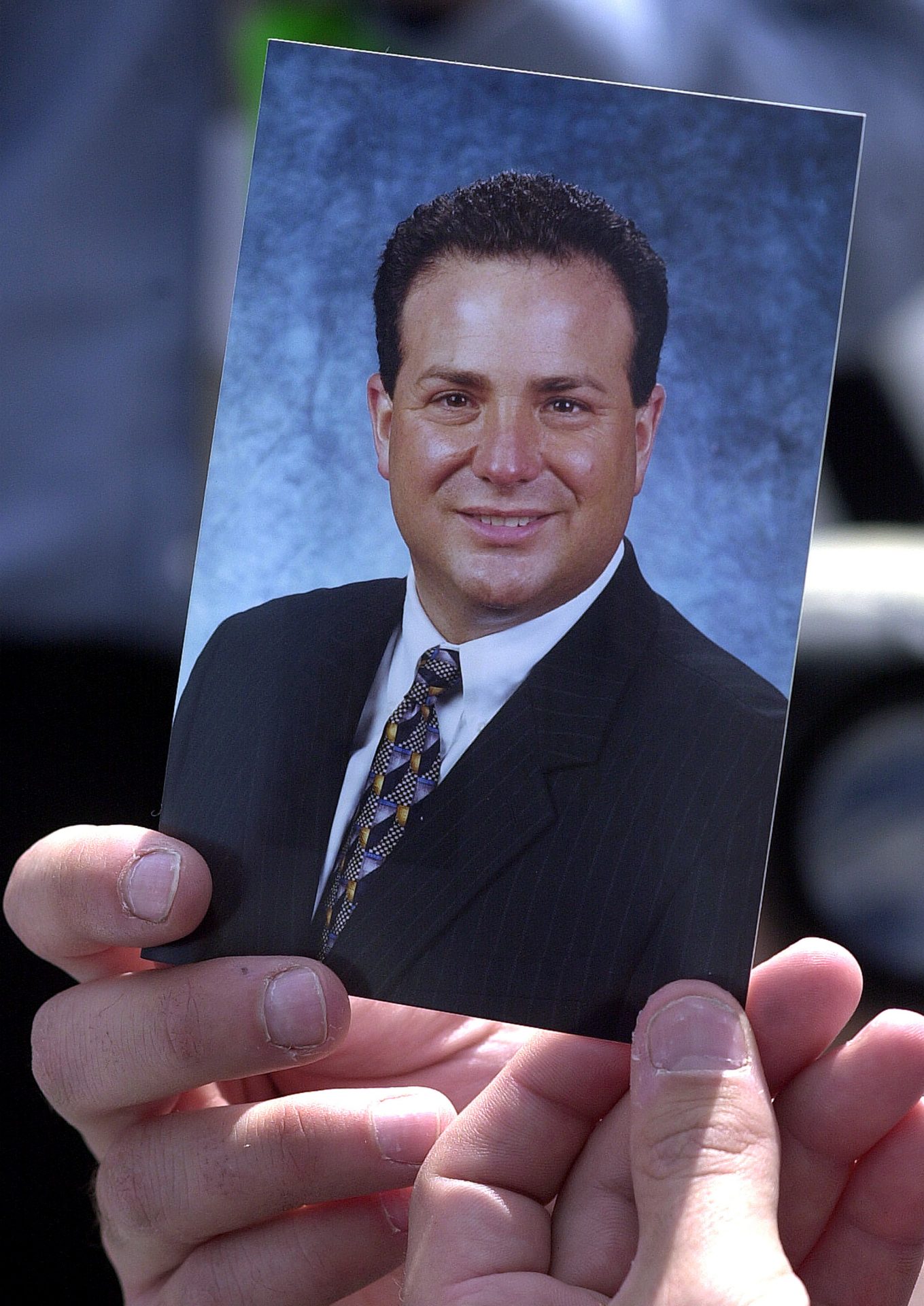 Ken Nacke holds a photo of his brother, Louis “Joey” Nacke, who died on Flight 93.

In 2011, I was able to walk the site for the first time since we sold our land. The six acres where the first class cabin and cockpit had landed were now part of the National Park Service. The rest — 157 acres — went to the nonprofit group the Families of Flight 93.

I no longer had a right to be here, and I no longer felt like a caretaker of this place. I was here as a guest. Ken Nacke, a Baltimore County police officer, was here to visit his brother and he asked me to join him. Louis “Joey” Nacke was a passenger on United 93.

But he was just Joey to Ken.

Like other family members, Ken struggled to cope with the loss of Joey. He remembered a dream where he was on that plane, seeing what unfolded through someone else’s eyes. Vivid details played out in his subconsciousness — the narrowness of the aisle, the claustrophobic feeling — of the passengers and crews charging toward the cockpit.

But it was in this field where Kenny felt he really turned a corner in his grief.

As we stood near a 17-ton sandstone boulder placed at the point of impact, Ken told me about his brother. He was 42 years old, a weightlifter with a Superman tattoo on his arm. Ken gestured around us. Here, he told me, was the place he’d been able to finally subdue his grief. One day, he said, he’d been sitting on a bench, soaking in the wildlife and beautiful surroundings. The smells. The peacefulness.

A pair of bear cubs wandered out of the woods. Maybe 200 yards away. Stopping short of the impact site, they started roughhousing. Wrestling. Rolling around. Swiping at each other. Chasing each other.

He was fascinated and just watched. His mind went to a time when he and Joey would battle. In family rooms. In the grass. In a way only brothers can. 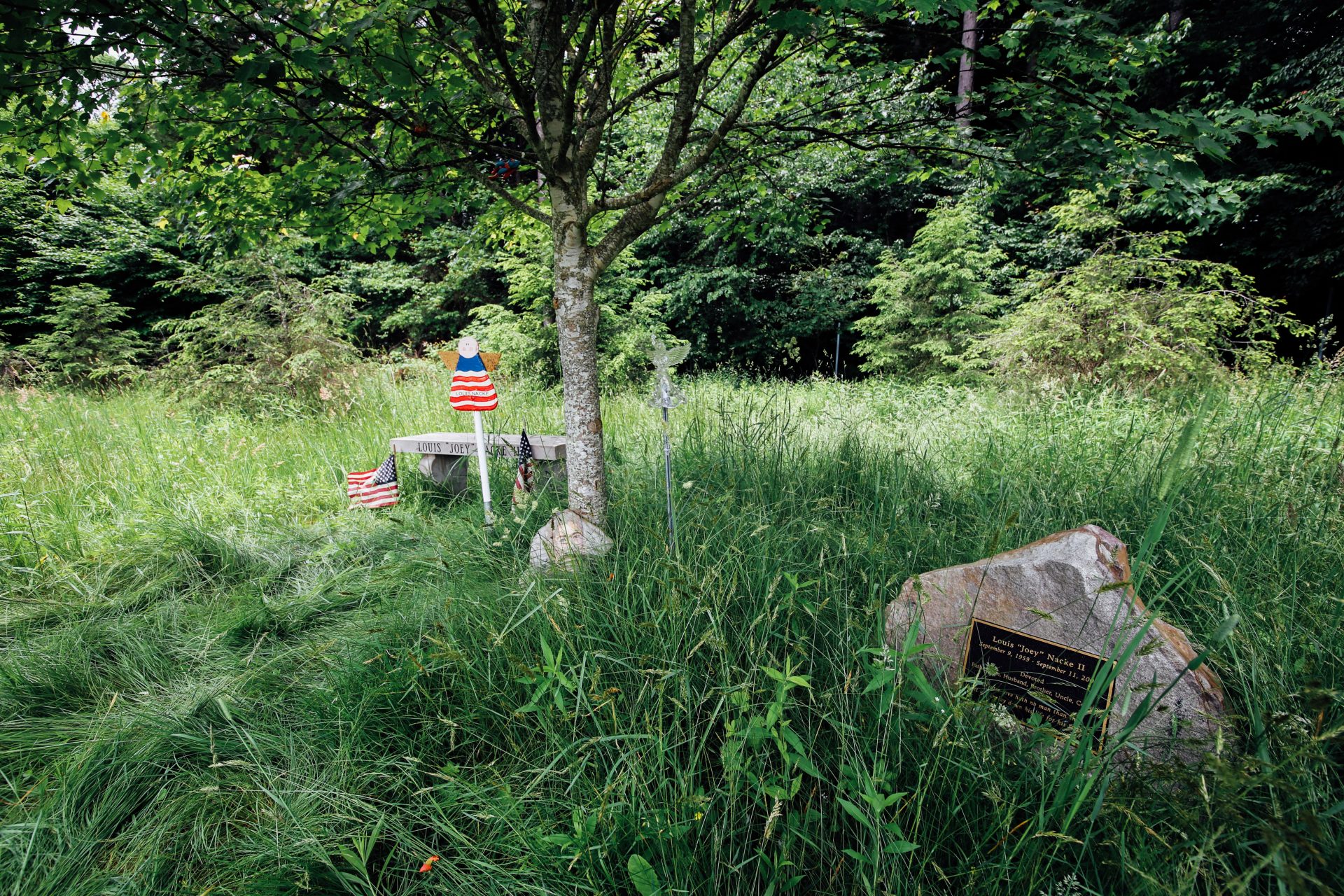 A bench and placard dedicated to Louis “Joey” Nacke.

Like the dream, he believed it was a message from Joey. He felt like it was a kick in the ass. Cherish the memories you have, but move forward and honor your sibling by living your life.

As we headed back to our cars, a baby deer trotted on the road in front of us. It stopped and watched. It took one tentative step in our direction and then bolted into the trees.

As the nation prepares to mark 20 years since the attacks, I find myself contemplating how visitors will likely never get to experience — never know — what this place is like inside the security gate.

To feel its power.

To see physical reminders of the sacrifices made.

Maybe that’s for the best.

The United Flight 93 crash site is often simply described as, “a field in Pennsylvania.”

A field once scarred by a smoldering crater, but now a living tribute to the 40 passengers and crew who likely saved the U.S. Capitol and hundreds of lives through their attempts to retake the cockpit.

Just like it’s been since that day in September two decades ago. 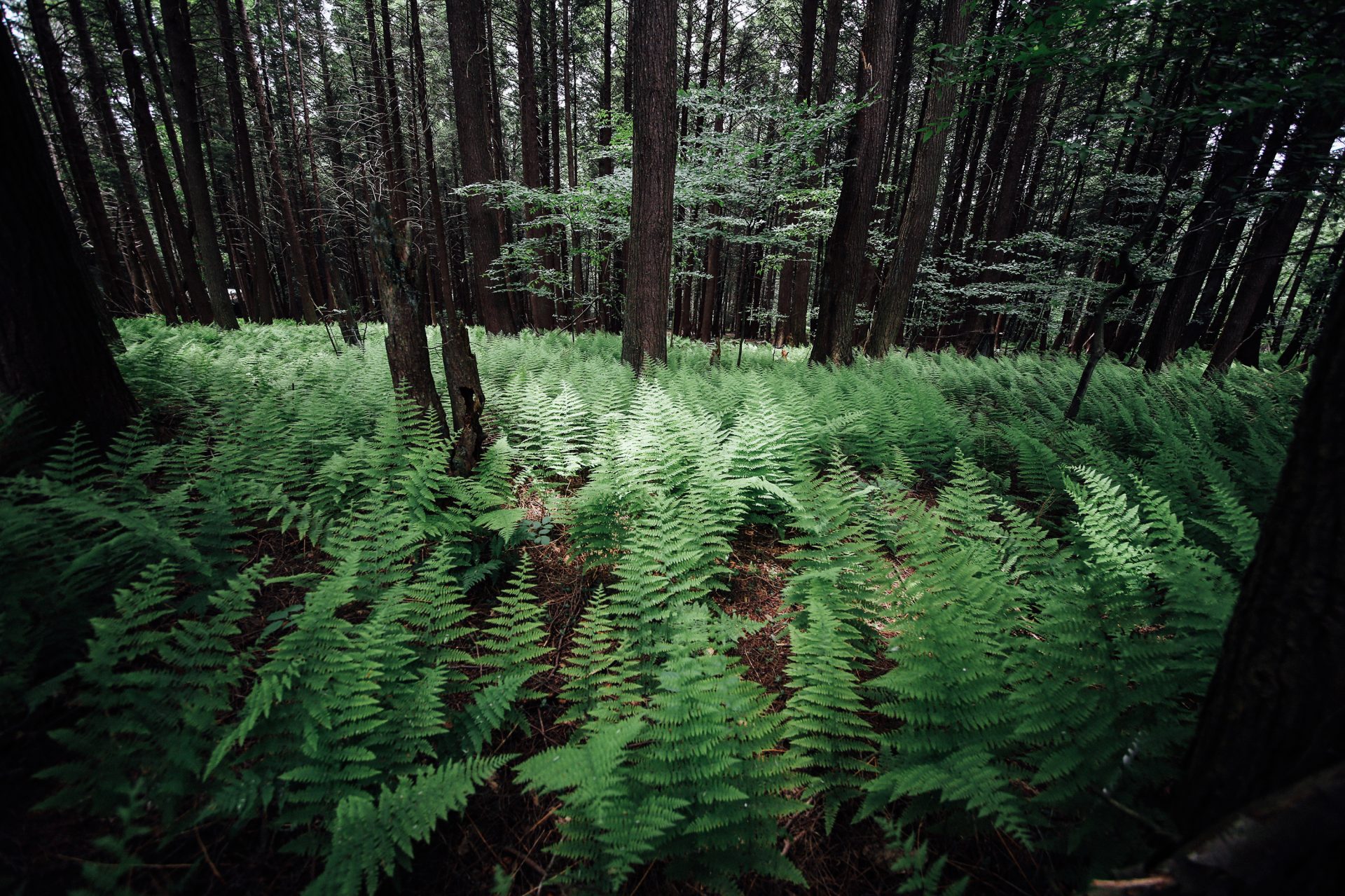 Hemlock trees and ferns are growing back on the land.