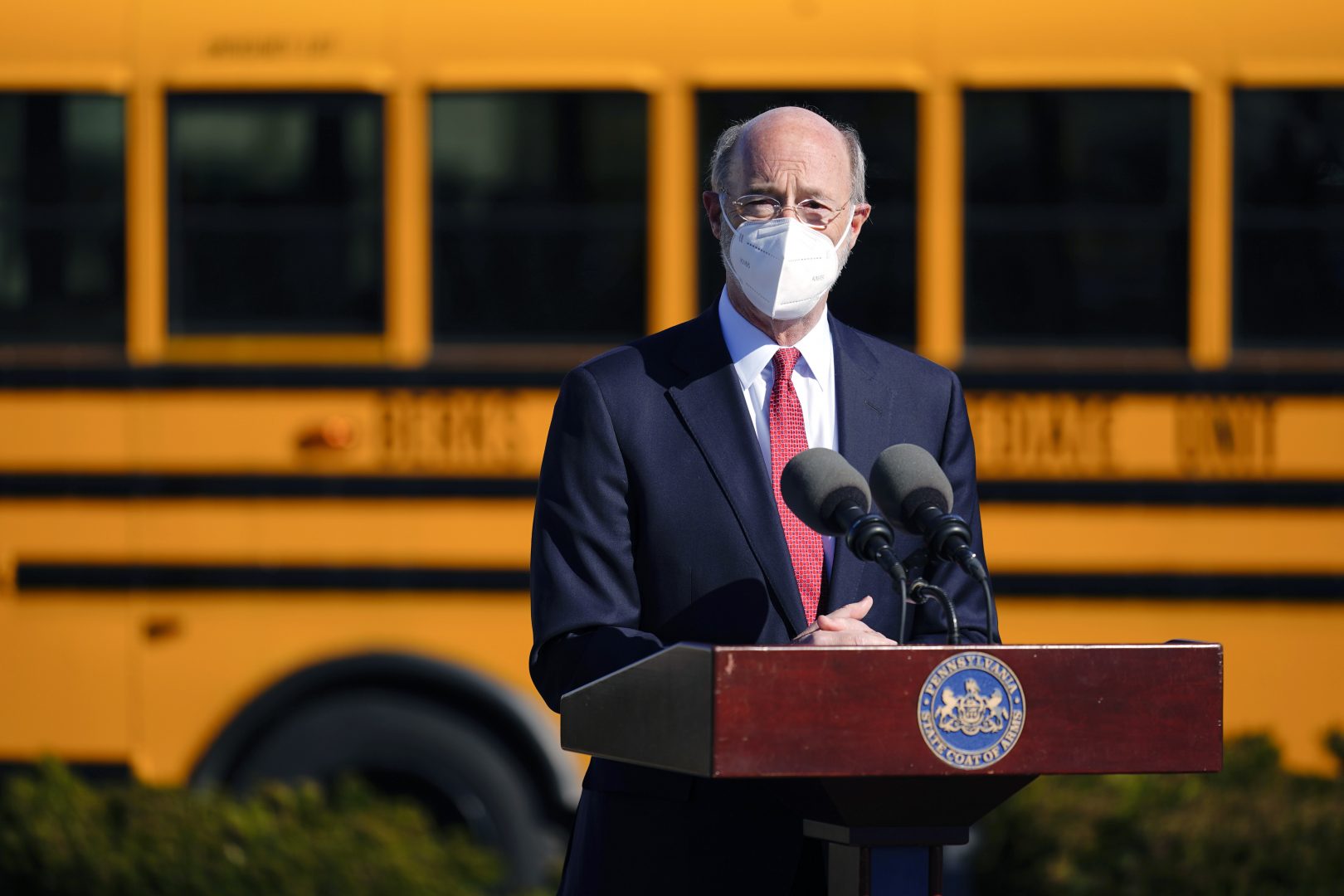 (Philadelphia) — Pennsylvania Gov. Tom Wolf’s decision this week to mandate masks in schools is drawing both praise and criticism across the state.

The state’s two largest teachers unions applauded the move requiring all staff and students to wear masks indoors in all K-12 schools and childcare facilities, no matter vaccination status or community transmission rates.

As cases of COVID-19 have risen through the summer, parents and school boards have remained divided over mitigation strategies.

In many rural areas of the state, districts spent the last 24 hours responding to parent complaints about Wolf’s order.

Up until Monday, the Jersey Shore School District in Lycoming County had a mask optional policy “based on a survey that we did with our families across the district,” said Superintendent Brian Ulmer.

Their mask optional plan was not based on local transmission levels — which, according to the Centers for Disease Control and Prevention, are high — but based on community opinion.

“As a leader and a parent, I’m frustrated that the decision is no longer in our local hands,” said Ulner, “and that’s a lot of what I’m hearing from parents as well.”

Ulner fears the mask mandate will push more families to cyber charter school options. According to Ulner, there was a significant exodus last year when the district turned virtual. Statewide, cyber charters added more than 22,000 students, a 59% year-over-year jump.

Through much of the summer, Wolf said masking decisions should be left to districts. A few weeks ago, he called on the legislature to reconvene and pass a mask mandate. GOP leaders denied that request and Wolf changed course this week after many districts already began classes, with most not calling for masks.

Ulner is frustrated by the whiplash, and feels he’s been put in a bad position with parents.

“They trusted us to come back, they trusted our approach, they’re back in buildings, their kids are with us,” said Ulner. “And now they are frustrated with the policy and if they leave again I don’t know that I’m going to get them back.”

Edward Albert, executive director of the Pennsylvania Association for Rural and Small Schools, said he’s noticed this concern from his members since Wolf’s announcement Tuesday.

“[It] was a day of a lot of parents being upset, superintendents’ phones ringing off the hook, and parents coming in and just saying ‘we’re taking our kid out of school and we’re putting them into cyber charter schools,’” said Albert.

Districts across the state have faced major conflicts within communities regarding their health and safety plans, and Albert said school communities are exhausted by it.

“A lot of upheaval, hard work, and effort” was put into developing current plans, added Albert.

Superintendent Matthew Splain of Otto-Eldred School District in McKean County, was also set to oversee a mask optional policy. Since the announcement, he has also received notifications from parents who plan to put their kids into cyber charter schools — which he says is not ideal based on inadequate internet access and lack of home support for students.

Splain wishes Wolf made the decision two weeks ago, saving board members and school communities a lot of stress, with heated meetings and arguments.

Philadelphia-area school districts have not been immune to the toxicity.

The Central Bucks School District has been in the middle of the storm, with both sides of the debate claiming death threats.

Ahead of Wolf’s decision and following a lawsuit from parents, the board was expected to vote on a new health and safety plan that included a mask mandate, the second such vote in a week.

At a meeting Tuesday night, the board voted 5-4 in to adopt Wolf’s mandate, but added a caveat saying families and staff members do not need a medical professional’s signature to receive a mask exemption.

According to Wolf’s order, schools must “Provide reasonable accommodations for individuals who state they have a medical condition, mental health condition, or disability that makes it unreasonable for the person to maintain a face covering.”

The order does not include whether a medical professional’s signature is required for an exemption. A request for clarification from the Pa. Department of Health was not received in time for publication.

Ahead of the board vote, community members on both sides of the coin testified during two hours of public comment.

Some in the crowd erupted in jeers, and shouted, “Lies!”

One pro-mask audience member chimed in: “I hope he never has to save their lives.”

A number of parents hinted that they would still send their kids to school without masks, no matter the mandate.

Tauni McFerson, of Buckingham Township, said her oldest son chose virtual last year because he could not wear a mask.

“He gave up being in person because mentally, with his anxiety, it was worse for him to be at school wearing that mask,” said McFerson, “Today felt like a gut punch.”

She asked the board, “What are you going to do for the kids who can’t wear masks?”

Laurie Bartolomeo, from Hartsville, said her son has multiple disabilities and is on oxygen 24/7. She expressed support for the mask mandate.

“You can’t enjoy the advantages of living in a community and ignore public health guidance,” said Bartolomeo, “You have to protect the whole community, not just healthy people.”

Also before the board’s vote, Vice President John Gamble announced that he would submit his resignation. Gamble said he received a death threat after the previous school board meeting, via voicemail.

Diana Leygerman, who is running for a regional seat against mask opponent Jim Pepper, received a threat via Facebook.

“Voters, do your civic duty and due diligence…I believe the correct sequence is ready… aim… fire.”

Leygerman was concerned that people would see that comment as a “call to action.”

Tabitha Dell’Angelo, who is challenging incumbent mask opponent Daniel Ring, received a letter to her house.

The note was on a printed article about Critical Race Theory, with the word “lunatic” circled. Next to “lunatic,” was written “you.”

“It felt like this person wanted me to know that they know where I live,” said Dell’Angelo.

Dell’Angelo was on the verge of dropping out of the race after receiving the letter, concerned over her family’s safety.

But, she’s still in it. “I think they’re hoping to intimidate so we back off and we don’t run,” said Dell’Angelo.