Samuel Lazar, No. 275 on the FBI Capitol Suspect list, appears here dressed in a camouflage flak jacket and black face paint and yelling into a bullhorn at the U.S. Capitol on Jan. 6, 2021. Online sleuths used his unique outfit to identify him in multiple videos where he appears to commit violent acts. 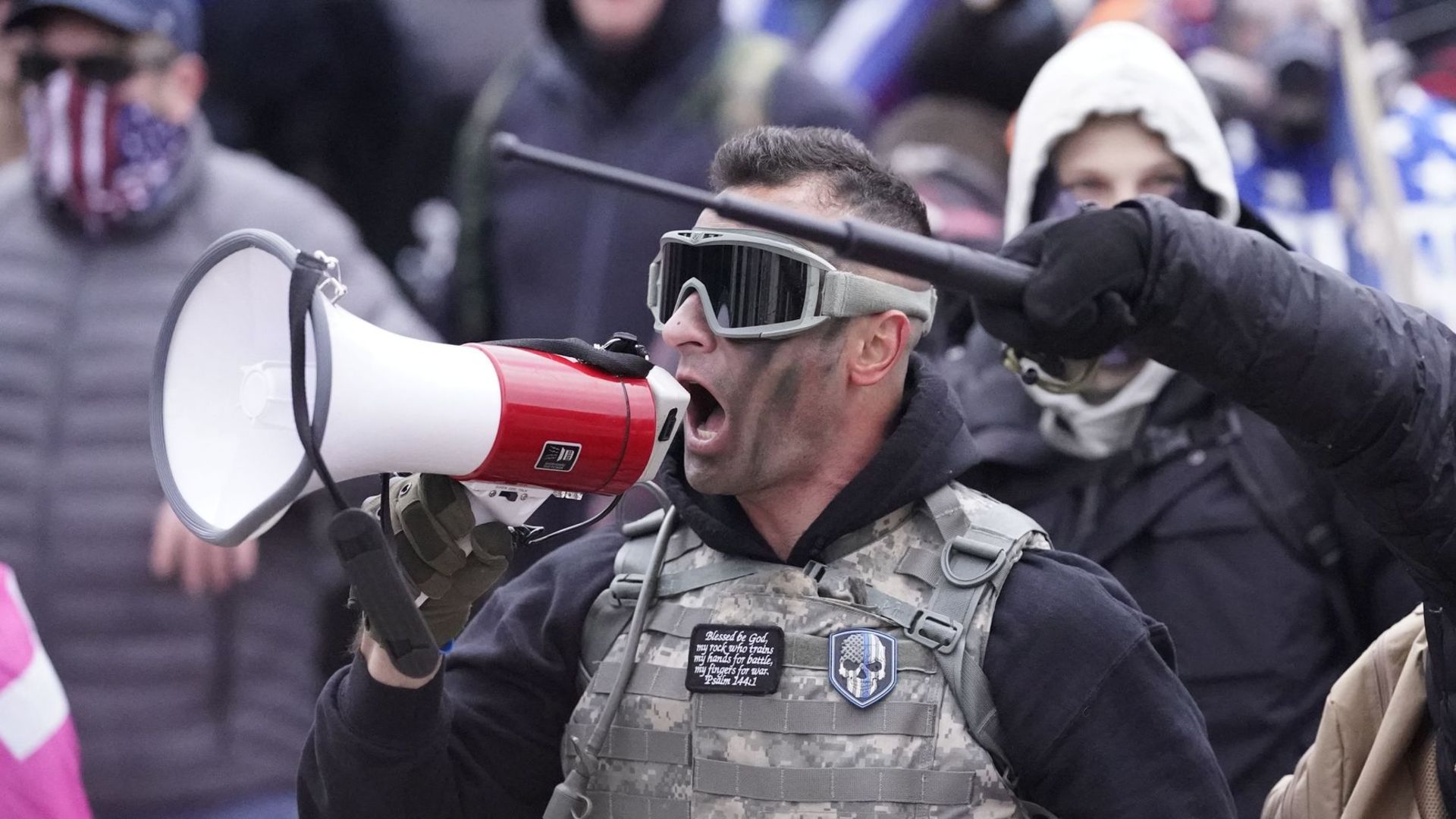 Samuel Lazar, No. 275 on the FBI Capitol Suspect list, appears here dressed in a camouflage flak jacket and black face paint and yelling into a bullhorn at the U.S. Capitol on Jan. 6, 2021. Online sleuths used his unique outfit to identify him in multiple videos where he appears to commit violent acts.

Lazar has been awaiting trial since he was charged in late July with several felonies stemming from the Jan. 6 attack on the U.S. Capitol.

In asking the D.C. court to keep him in federal custody until then, the Department of Justice successfully argued that Lazar is an “ongoing danger” to his community. That’s part of its broader strategy to hold accountable those accused of violence during that day’s events.

If the DOJ’s strategy in his case wins out, Lazar may not walk free anytime soon.

“I think you’ve seen a desire by the FBI to focus the investigation in any of three buckets: either they went into the Capitol, or they committed violence against law enforcement or members of the media, or they conspired to disrupt the [election certification] process,” Research Fellow Jon Lewis of George Washington University’s Program on Extremism said.

Lazar was asking a judge to let him go home before trial. His lawyer, David Benowitz, argued his allegedly violent behavior on Jan. 6 was isolated, and noted that multiple friends and neighbors wrote letters supporting his character.

But a government prosecutor pointed to videos posted to social media, including one appearing to show Lazar spraying a chemical agent at officers trying to hold back rioters from entering the Capitol.

In others, he appears to encourage the mob to “charge the building” and to take firearms from law enforcement.

In yet another incident Assistant U.S. Attorney Doug Collyer pointed to from Aug. 2020, Lazar was pictured brandishing a gun. He wasn’t allowed to have one because of a prior conviction.

NEW: Capitol rioter Sam Lazar’s lawyer says they’re going to ask for a continuance on the detention hearing “based on some information we just received from the government about 20 minutes ago.” #facepaintblowhard https://t.co/knCy3HqSCU

“He was possessing and aiming firearms on a public street and adopting posts about executing politicians, and…on January 6th, 2021 he was assaulting police officers at the U.S. Capitol, which begs the question, Your Honor: what’s next if this defendant is released?” Collyer asked the court during Tuesday’s detention hearing.

“I find that the nature and seriousness of the danger to the community weighs in favor of detention,” Meriweather said. “The combination of conduct between August (2020) and January (2021) indicates…that upon release, Mr. Lazar would engage in criminally-dangerous conduct.”

Court documents show Lazar is facing five separate charges. He could spend as much as 20 years behind bars if convicted of the most serious of them.

Lewis, whose work has recently focused on tracking the nearly 600 people charged in connection with the Jan. 6 attack, said Lazar’s case is set apart from some since the government hasn’t always been able to make the case about future violence.

“These individuals’ conduct, on the day at the Capitol, by itself is not necessarily indicative of future dangerousness,” he said.

Lewis said the Department of Homeland Security is starting to issue threat bulletins about extremist groups that participated in the Jan. 6 attack who say people like Lazar are “political prisoners”  and that they might take action to free them.

That could be another factor courts lean on in deciding whether other alleged rioters like Lazar are dangerous enough to be kept in custody, he said.

“So when you have rhetoric like that increasing and the potential for these extremist movements to potentially make future appearances at rallies around the Capitol, I think that’s always going to be a significant factor in any decision,” Lewis said.

Neither Lazar’s trial date or the timing of any appeal has been set.

48 people from Pennsylvania have been charged in connection with the Jan. 6 attack, outnumbered only by those from Florida and Texas.