Young people from the Rosebud Sioux Tribe pray during a ceremony at the U.S. Army's Carlisle Barracks, in Carlisle, Pa., Wednesday, July 14, 2021. The disinterred remains of nine Native American children who died more than a century ago while attending a government-run school in Pennsylvania were headed home to Rosebud Sioux tribal lands in South Dakota on Wednesday after a ceremony returning them to relatives.

The nonprofit’s most immediate goal now is to raise money to buy land.

(Carlisle) — About 10 years ago, a group of descendants of Carlisle Indian Industrial School students got together to form the Carlisle Indian School Project. They wanted to memorialize the students, and to help descendants heal and learn about their relatives.

They planned to create a heritage center in Cumberland County outside the U.S. Army’s Carlisle Barracks. The center would tell the story of thousands of Native American children who were plucked from their tribal nations and sent to the government-run boarding school, where they were forced to speak English and taught industrial and domestic trades, as well as some traditional subjects such as math and geography.

Many students were also part of a forced labor program that sent students to work in Pennsylvania farms. Many fell ill and often died due to the hard labor conditions.

The proposed Carlisle Indian School Heritage Center would initially have an interpretive center. It would expand to include more commercial development, including a hotel and restaurant.

But organizers say the project has stalled due the pandemic, which has limited the group’s ability to travel for fundraising.

In addition, the tribes that were working with the nonprofit have had to focus attention elsewhere. Jason Holuby, whose Oklahoma-based firm has created a design for the heritage center, said tribal nations have been hit hard by COVID-19. He said the influx of federal relief money has shifted the focus to developing public health infrastructure in Native American reservations.

“The tribes have been so incredibly busy with taking care of their own, that they just really didn’t have a lot of opportunity to think of anything outside of that,” Holuby said

The nonprofit’s most immediate goal now is to raise money to buy land.

One of the sites in consideration is an 80-acre parcel owned by the county, near the U.S. Army Heritage and Education Center in Carlisle. However, the county is also exploring other uses for that site.

There is no firm projected cost for the project. In 2016, the nonprofit estimated it would cost $20 million, but organizers say the cost will be higher now. The group is hesitant to put a price tag on it because they’re still trying to work out new details.

The nonprofit initially planned to preserve an old farmhouse at the Carlisle Barracks that was going to be demolished, and build a memorial there. Because the costs of just restoring the building were going to be exorbitant, the group decided it would be best to plan to build a heritage center outside Army property. Sandra Cianciulli, president of the Carlisle Indian School Project, also said the group didn’t want the Army having input on what they were doing.

“We thought about what it would be like to try to write your own narrative with the Army looking over your shoulder. Since you were in the barracks, that was a possibility. So we decided to look at our own land that we could buy,” Cianciulli said.

Cianciulli, who has Oglala Lakota heritage, learned about her relatives who went to the school through her father, who used to take her on trips to the barracks cemetery. Two Sioux students, Geoffrey and Bertha Chipps, were her great-uncle and aunt.

“My hope is that the ancestors will be happy with what it looks like,” Cianciulli said. “I want it to be informative, and an education tool for everyone worldwide.” 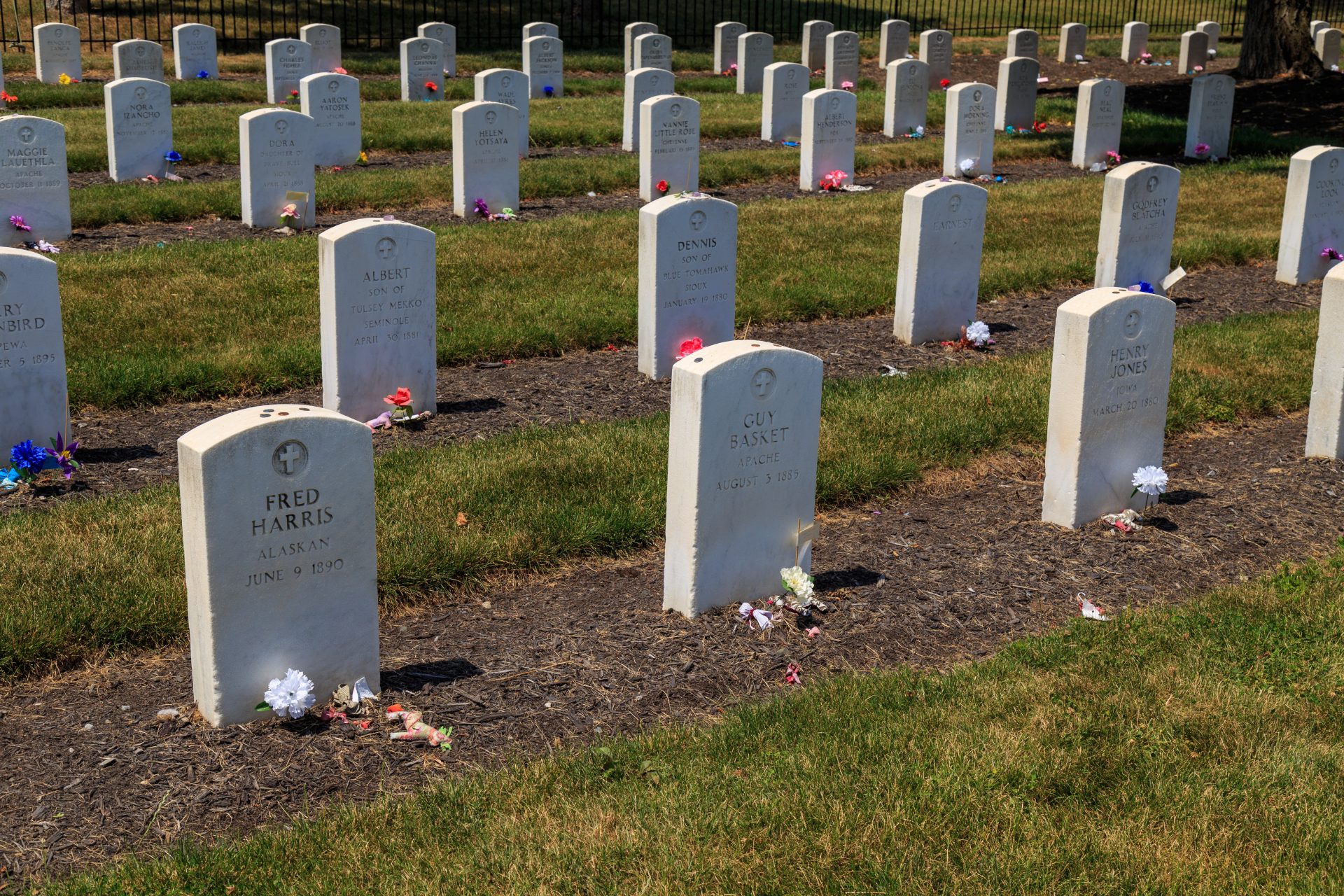 Plans for a heritage center began to take form when Carlisle Indian School Project was granted nonprofit status in 2016. The Chickasaw nation helped pay for a feasibility study for the project.

Holuby, president of New Fire Native Design Group and member of the Muscogee Creek nation, joined the project as pro-bono architect and designed a visual rendering of what the center would look like. Holuby’s architecture and engineering firm focuses on Native American building projects.

Under the phased plan that Holuby designed, the heritage center would include a traditional Native American village at the entrance, where visitors would mount a train to the main museum building — a journey that would tell the story of students leaving their home villages and arriving in Carlisle.

The heritage center itself would stay true to the boarding school’s original architecture to highlight the contrast between the students’ homelands and the government school. The site plan also includes a boulevard lined with flags from every tribal nation that went to the Carlisle Indian Industrial School. 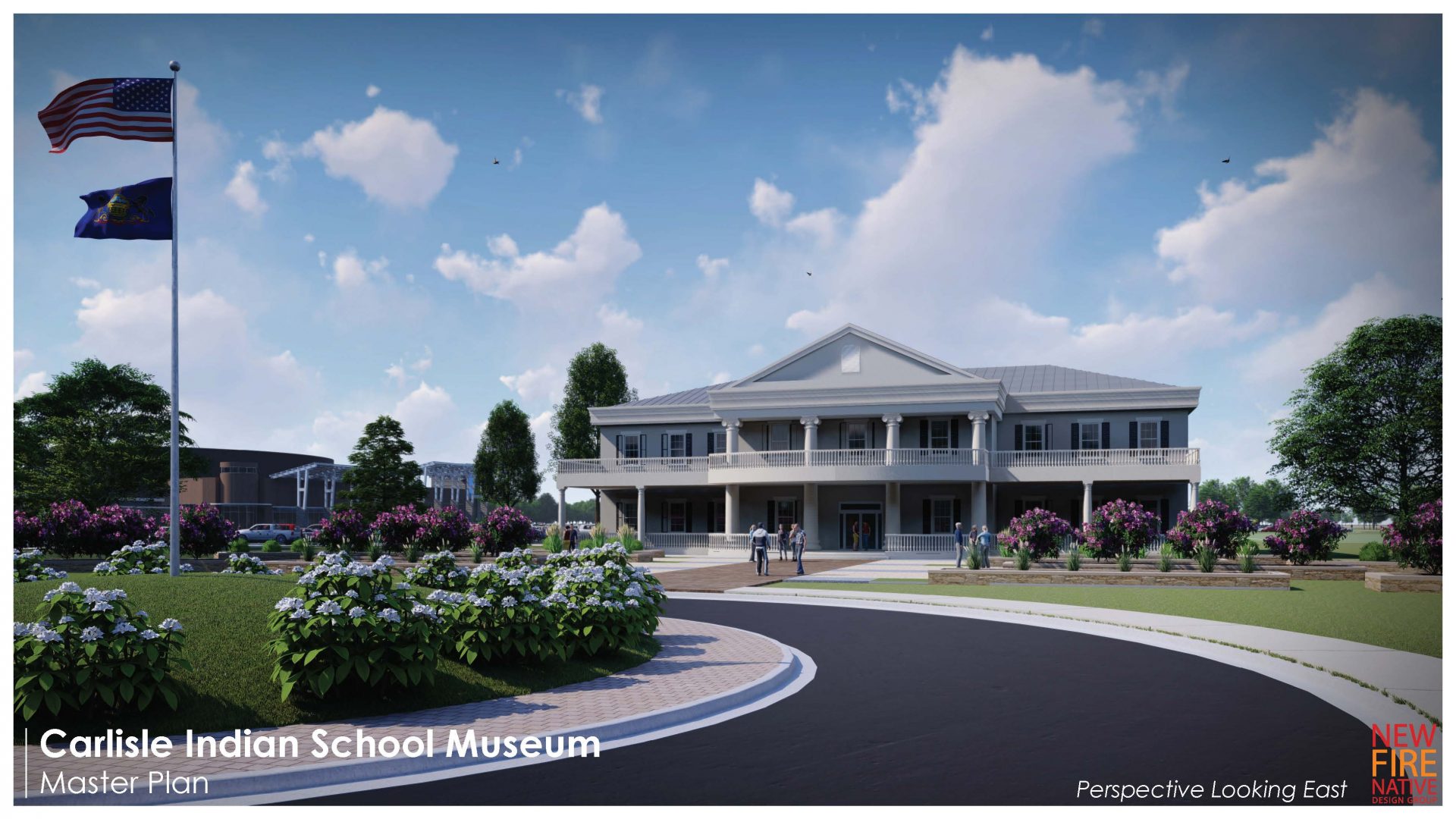 The centerpiece of the project would be an interpretive center that would examine the United States’ legacy of boarding schools, the reasons behind their creation and the traumatic effects of assimilation policies. The center would also highlight oral histories from descendants through audio-based installations and feature artifacts that used to belong to students and were donated by relatives.

“Step by step, we need to tell our own story. We need to control our own narratives and we need to own our own history, and I think that’s what this Interpretive Center is all about,” said Edward Hall, a board member of the Carlisle Indian School Project.

“Having a heritage center that tells the whole story — the good, the bad and the ugly — in  a one-stop shop, I think, you know, would have more value for this region’s tourism, and also to more properly tell the complete story,” Farr said.

The Carlisle Indian School Project’s attempt to reinvigorate the heritage center idea comes as the history of Native American boarding schools are receiving more attention from the U.S. government. This summer, Secretary of Interior Deb Haaland, a descendant of a student who attended the Carlisle Indian Industrial School, launched a federal probe into the legacy of hundreds of American Indian boarding schools.

Roberta Paul, a member of the Nez Perce nation, is a descendant of Robbie Paul, a student who was admitted to the Carlisle Indian Industrial School in 1880 after experiencing the Nez Perce War in 1877. She says a heritage center could be a place for healing for descendants.

“I think it’s important because our history of boarding schools is not well known throughout the United States history period, and it would help bring understanding of what happened to Native Americans when they went to boarding schools, that instant transformation and the abuse,” she said.

Educating a post-9/11 generation: The effort to keep the story alive