Visitors look over one of the exhibits at the visitors center of the Flight 93 National Memorial, Saturday, May 8, 2021, in Shanksville, Pa.

Educating a post-9/11 generation: The effort to keep the story alive

"But being able to talk to kids and say, ‘There were good people on (board), heroes, and there are people who make these kinds of decisions to put others before themselves every day.”

witf · Educating a post 9/11 generation: The effort to keep the story alive

(Harrisburg) — More than 73 million Americans have been born in the years since the Sept. 11 terrorist attacks. And millions of others are too young to remember what that day was like.

Terrorists hijacked four planes, crashing two into the World Trade Center in New York City and one into the Pentagon, killing thousands. But on the fourth plane, United Flight 93, 40 passengers and crew fought back and prevented the plane from hitting its target, believed to be the U.S. Capitol. The plane crashed in a field near Shanksville, Pennsylvania.

Two decades later, many friends and family members of those impacted by that day are working to find ways to tell Flight 93’s story to the next generation.

The Flight 93 National Memorial in Somerset County is one place to start. People can tour the visitor center, look at displays and listen to the 37 phone calls from passengers and crew members on board the hijacked jetliner.

The fourth- through twelfth-grade students who visit the memorial now were not alive when 9/11 unfolded. So over the past 20 years, the experience and understanding students have of the terrorist attacks has evolved and changed, according to Adam Schaffer, chief of interpretation, education and visitor services at the memorial.

He says visiting students may not know there were two World Trade Center Towers, or even know the types of devices people used to communicate with each other.

“(We) educate them about what technology was available and how the passengers and crew on this flight use that to their advantage to be able to make a difference,” he said. 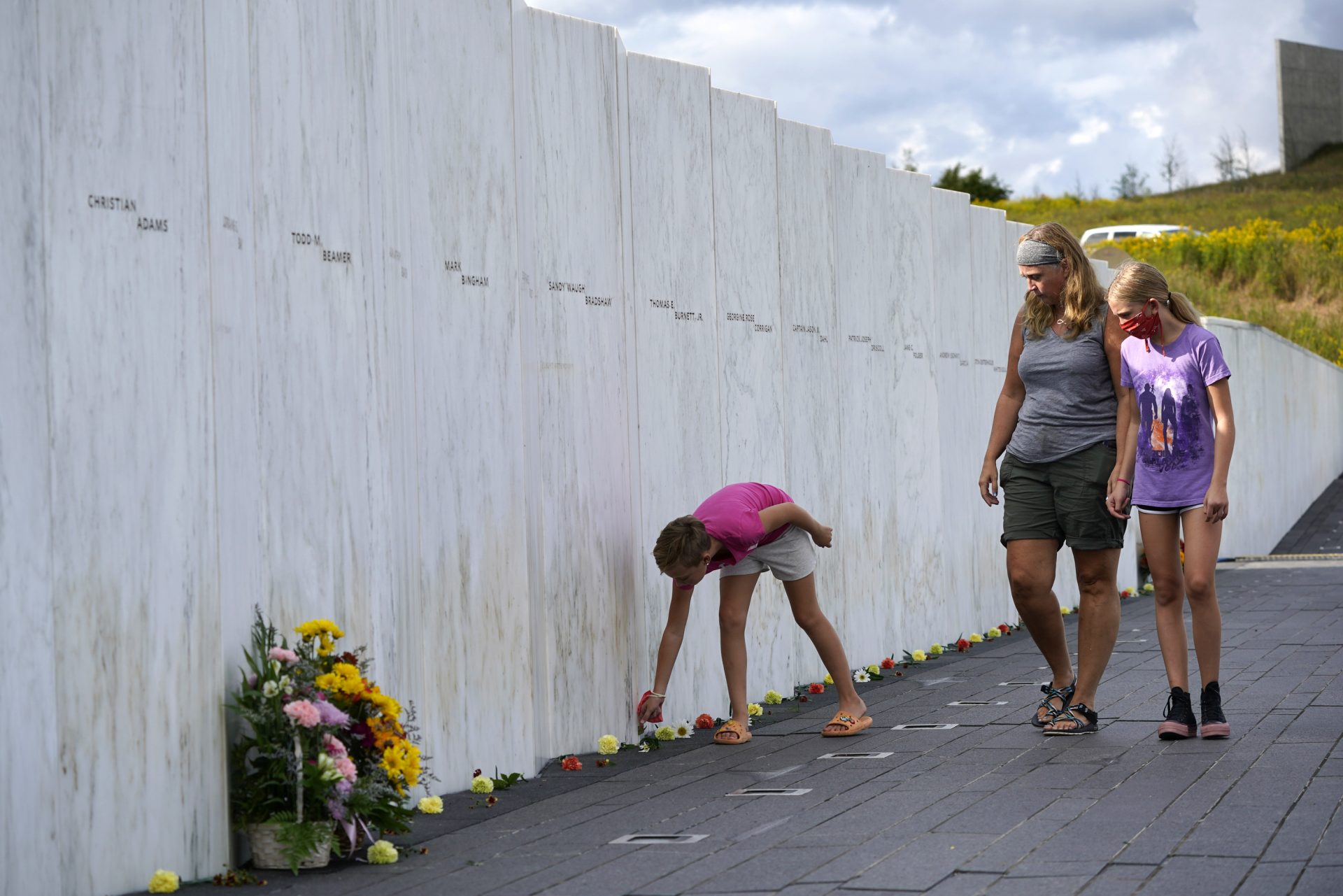 In many ways, the world before that day in September 2001 is completely foreign to younger generations. They don’t know a world without constant conflict in the Middle East or increased security at airports … and many have never seen an air phone.

So much has changed, he said, that what’s familiar to them now was much less commonplace 20 years ago.

That technology proved vital for the San Francisco-bound flight, which was delayed on the tarmac in Newark, New Jersey, for 25 minutes. The late takeoff gave those on board time to call their loved ones and find out what had happened in New York and at the Pentagon.

After the four terrorists took over the plane, the passengers and crew voted and decided to rush the cockpit. Schaffer said their heroic action exemplifies the power of individuals.

“These people had less than 30 minutes to find out what kind of a situation they were in. And they ultimately chose to take action and try to make a difference with their particular outcome,” Schaffer said. “And they changed the course of American history.”

As the country moves farther in time from the attacks, Schaffer believes it’s important for students to learn about 9/11 in the classroom.

A collection of photographs of the 40 people that died in the crash of Flight 93 in the 9/11 terrorist attacks of 2001 is one the exhibits at the visitors center of the Flight 93 National Memorial, Saturday, May 8, 2021, in Shanksville, Pa.

“When I think about the day, it still makes me angry … And when I talk to kids they don’t get that.”
— David Raymond, history teacher

Bringing the story into the classroom

David Raymond is helping them do just that. He teaches U.S. history to eighth graders at Northeastern Middle School in Mount Wolf, York County.

“I still have a guttural reaction to the event. I remember where I was, who I was with, how I felt that day. When I think about the day, it still makes me angry … And when I talk to kids they don’t get that,” he said.

His current class of students was born during the final years of President George W. Bush’s second term.

“(My students) view the 9/11 attacks kind of like the way I view the Kennedy assassination. I was born 10 years after that event and it was to me, it’s always been a historical event. It’s been a horrible event, but I don’t have any emotional attachment to it,” Raymond said.

Sept. 11 occupies an awkward place in the American timeline for teachers. It’s too recent to talk about as a current event, but not old enough to be in most social studies curricula. The remembrances also take place at the beginning of the school year, before classes really delve into 21st Century history.

So Raymond makes sure to take time out, every Sept. 11, to talk about it.

“I tried to explain to them why the adults in their world are so passionate about that day. (Students) are told you’re supposed to put their head down and … feel a certain way that day. But yet they don’t have an emotional attachment to it,” he said.

Visitors by the wall of names at the Flight 93 National Memorial. The boulder marks the area where the hijacked jetliner crashed on September 11, 2001, in Stonycreek Township, Somerset County.

Someone who does have an emotional connection to it is Emily Schenkel of Bethlehem. Her godmother — Lorraine Bay — was a flight attendant on Flight 93. 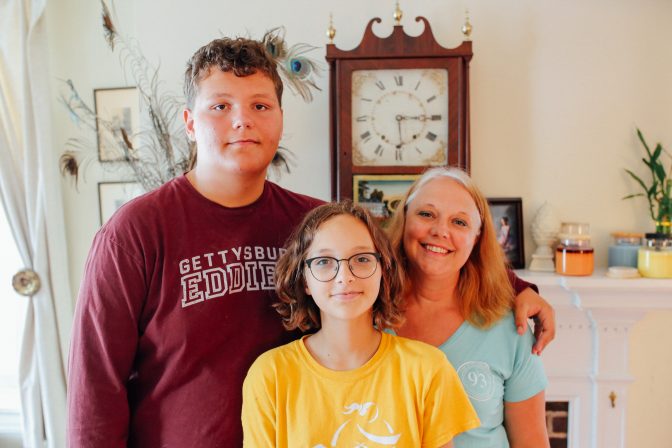 She has supported teaching the history of the attacks and lessons learned both at the memorial and at her children’s school. Schenkel says the story of Flight 93 exemplifies an ultimate act of love.

“They did the most democratic thing that they could do — they got together, they talked about it and they made a vote. And their decision was really based on love and courage,” she said.

The passengers and crew lost their lives in the fight over control of the plane but likely prevented further tragedy at the U-S Capitol and saved hundreds, if not thousands of lives.

“There’s a lot of bad that day, a lot of evil, but being able to talk to kids and hold (those on the plane) up and say, ‘There were good people on (board), heroes, and there are people who make these kinds of decisions to put others before themselves every day,” she said.

That message isn’t lost on her children either. Lorraine Schenkle and her older brother are the third generation of the family working to keep the story alive. The 11-year-old, who’s named after Schenkel’s godmother, Lorraine, says she feels a sense of responsibility being connected to history.

Even though Lorraine Schenkle wasn’t alive during the terrorist attacks, she can connect the generations —  those who have visceral memories of the day and the others who are just now trying to understand it.

She and the rest of the third generation of 9/11 family members can keep the story of tragedy, sacrifice and heroism alive.

Central Bucks at center of school mask debate, amid lawsuit and another board vote Tuesday