Many at-home DNA ancestry testing kits require participants to mail in a sample of saliva.

The census has revealed a more multiracial U.S. One reason? Cheaper DNA tests

For about 1 in 10 people counted for last year’s U.S. census, a single check box was not enough to report their racial identities.

Their multifaceted responses to the race question for the 2020 head count helped produce the data released this month for redrawing voting maps, enforcing civil rights laws and guiding federal funds to local communities.

Now, demographers and other researchers are trying to figure out what caused the number of people who identified with more than one racial group to jump over the past decade by an eye-popping 276%.

As experts look at the changing numbers, three main factors have emerged as drivers of this boom.

A growing share of children in the U.S. have been born to parents who identify with racial groups that are different from one another.

For the 2020 count, the Census Bureau changed how it asked about race and how it categorized the answers. (If you wrote in a response that federal standards consider to be “Hispanic or Latino,” for example, that answer was sorted into the “Some Other Race” category.)

And more people may be rethinking what they tell the government about their identities. Some demographers are wondering how much a relatively new trend may have contributed to that growth — the rise of at-home DNA ancestry testing.

Exactly how big of an effect these tests had on census results is difficult to pin down. But many researchers agree that as the cost of at-home kits fell in recent years, they have helped shape an increasing share of the country’s ever-changing ideas about the social construct that is race. 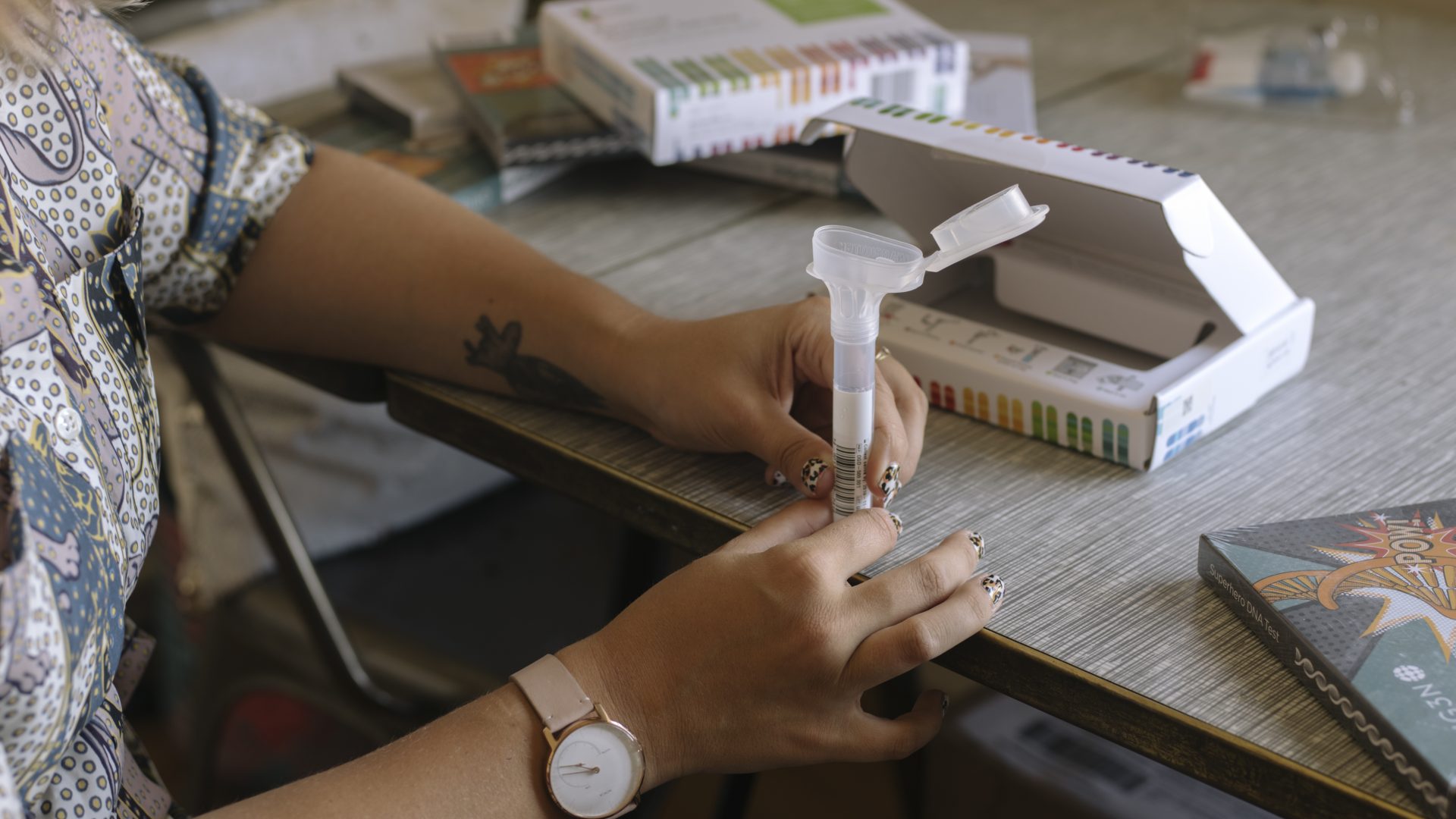 Many at-home DNA ancestry testing kits require participants to mail in a sample of saliva.

Although DNA ancestry test takers likely make up a sliver of the U.S. population — 16%, according to a 2019 estimate by the Pew Research Center — the wide reach of the marketing efforts of companies such as 23andMe and Ancestry.com, which operates the AncestryDNA service, should not be underestimated, warns Jenifer Bratter, a sociologist at Rice University who studies multiracial identity.

“The public has kind of taken in the notion that you can find out ‘who you are’ with a test that’s supposed to analyze your genes,” Bratter says. “What that does for anyone who does work in racial identity and racial demography is cause us to think through how genetic ideas of race are in public circulation.”

“These genetic ancestry tests may be pushing the concept of race to match genetic ancestry more, including information about very distant ancestors, rather than sort of the more contemporary family history or personal social experience,” says Sasha Shen Johfre, a Ph.D. candidate in sociology at Stanford University who co-authored a study recently published in the academic journal Demography.

Its findings suggest adults 50 and up are most likely to self-identify as multiracial on surveys after receiving a report about the potential roots of their family tree based on a DNA analysis of their saliva. The study of more than 100,000 adults registered as potential bone marrow donors in the U.S. also found that DNA test takers were especially likely to identify with three or more racial groups.

Many people who identify as white but not Latino often buy these test kits for themselves wanting to claim a different identity and use the results as proof of a specific ancestry, according to research by Wendy Roth, a sociologist at the University of Pennsylvania who has looked into how genetic ancestry testing influences the identities of different racial and ethnic groups in the U.S.

“In and of itself, it doesn’t tell you your race or ethnicity,” Roth says. “What these companies are telling you is that you have a likelihood of having a certain amount of your genetic markers associated with certain populations more often than others.”

Roth is concerned about the potential implications of genetic ancestry test results shaping how some people report their race for the census, which produces data the government relies on to enforce civil rights protections and researchers use to measure the racial disparities in health care, housing access and education.

From a DNA swab to the census form

Still, some people who participated in last year’s census say DNA ancestry tests were a useful tool for better understanding the complexities of their family histories and how they have shaped their racial identities.

With grandparents from Barbados, Spain and the U.K., Jonathan Marshall of Fort Myers, Fla., says he grew up in Trinidad never “singularly” identifying with one racial group.

“I’m just a product of all of that mixing. From a very young age, we were always taught this is what makes you,” Marshall says. “My mom’s mom, she’s of Asian descent, which previously I thought was Japanese.”

But after taking a genetic ancestry test, Marshall says he now thinks his family’s Asian heritage stems from China. On the 2020 census form (which did not include an “Asian” box but provided options for specific Asian groups), his wife checked off for him the “Black,” “White” and “Chinese” boxes. Without the test results, Marshall says, “I would have probably gone with another Asian country.”

Both Maldonado and her mother agreed on checking the “Puerto Rican” box to answer the census question about “Hispanic, Latino, or Spanish origin.” But there was no consensus on how to respond to the race question at first.

“When I was growing up, we were all white,” says Maribel Rodríguez, Maldonado’s mother.

“I refused to just check the ‘White’ box,” says Maldonado, whose test results, like her mother’s, showed an “ethnicity estimate” that included percentages for “Indigenous Puerto Rico” as well as regions in Europe and Africa. “It would deny that culture, that ancestry, those people that came here to the island and survived all the odds against them for me to be here.”

Maldonado says she might have checked off just the “Some Other Race” box, but based on the DNA test results, marked the categories for “White,” “Black” and “American Indian or Alaska Native,” in addition to writing in “Taíno” for the Indigenous people of Puerto Rico.

And Maldonado did the same for Rodríguez, who says she eventually came to share her daughter’s perspective after reflecting on the test results and conversations about racial inequity in the U.S. that the Black Lives Matter movement has sparked in recent years.

“The fact that people are really embracing who they are,” says Maldonado, who works as a digital strategist for Define American, an immigrant advocacy group, “I think it’s a bigger sign of the awakening that’s happening in society and that we’re moving towards not race utopia, but a society that actually takes in consideration the differences and celebrates them, rather than judge them or oppress them.”

The limits of DNA tests and race data

While the rise in the numbers of people reporting multiracial identities for the 2020 census may help paint a more thorough portrait of the country’s diversity, there’s also a lot this new race data does not reveal.

“Five people who tick the same two or three boxes on the census can have very, very different lives,” says Miri Song, a sociologist at the University of Kent who is co-writing a book about multiracial people of white ancestry in the U.S. “Some of them may have white spouses. Some of them may have non-white spouses. Some may have co-ethnic spouses with whom they share an ethnic heritage. Some may be racially politicized. Others may not.”

For Aliya Saperstein, a sociologist and demographer at Stanford University who co-authored the study recently published in Demography, it all underscores the ongoing challenge of how to measure race with an ancestry-test effect joining the list of complications.

“There is no question this is a development that demographers will be following closely over the next decade,” Saperstein says.

Editor’s note: Ancestry.com is one of NPR’s financial supporters.