A week after the most powerful Republican in Pennsylvania’s Senate promised a full “forensic audit” of the 2020 election, there’s little clarity among those in the legislature — including on the senator’s own staff — about exactly what that means, or how it will work.

But based on conversations with GOP staffers and members on both sides of the aisle, one conclusion appears widespread among those watching the Senate’s audit drama unfold: Senate President Pro Tempore Jake Corman, generally seen as a by-the-books pragmatist, is making a political calculation.

“I think Senator Corman and other Republicans are responding to political pressure from the national party,” said Sen. Sharif Street (D-Philadelphia). “The national Republican party, led by the former president, has ginned up a lot of anxiety about whether the election process happened fairly, which we know it did.”

In the months since the election, State Sen. Doug Mastriano (R-Franklin) has spearheaded an aggressive effort to audit the 2020 election, inspired by a similar initiative in Arizona and predicated on baseless theories about ballots that weren’t filled in by individual voters and software “shenanigans.” Corman recently barred Mastriano from leading the effort, accusing him of being “​​interested in politics and showmanship and not actually getting things done.”

It has led to a volley of insults between the two, and little concrete information about Corman’s new plans for the investigation. Street, who is minority chair of the Senate’s committee on elections and works closely with Republicans, says the situation is a common topic in his behind the scenes conversations with GOP colleagues. 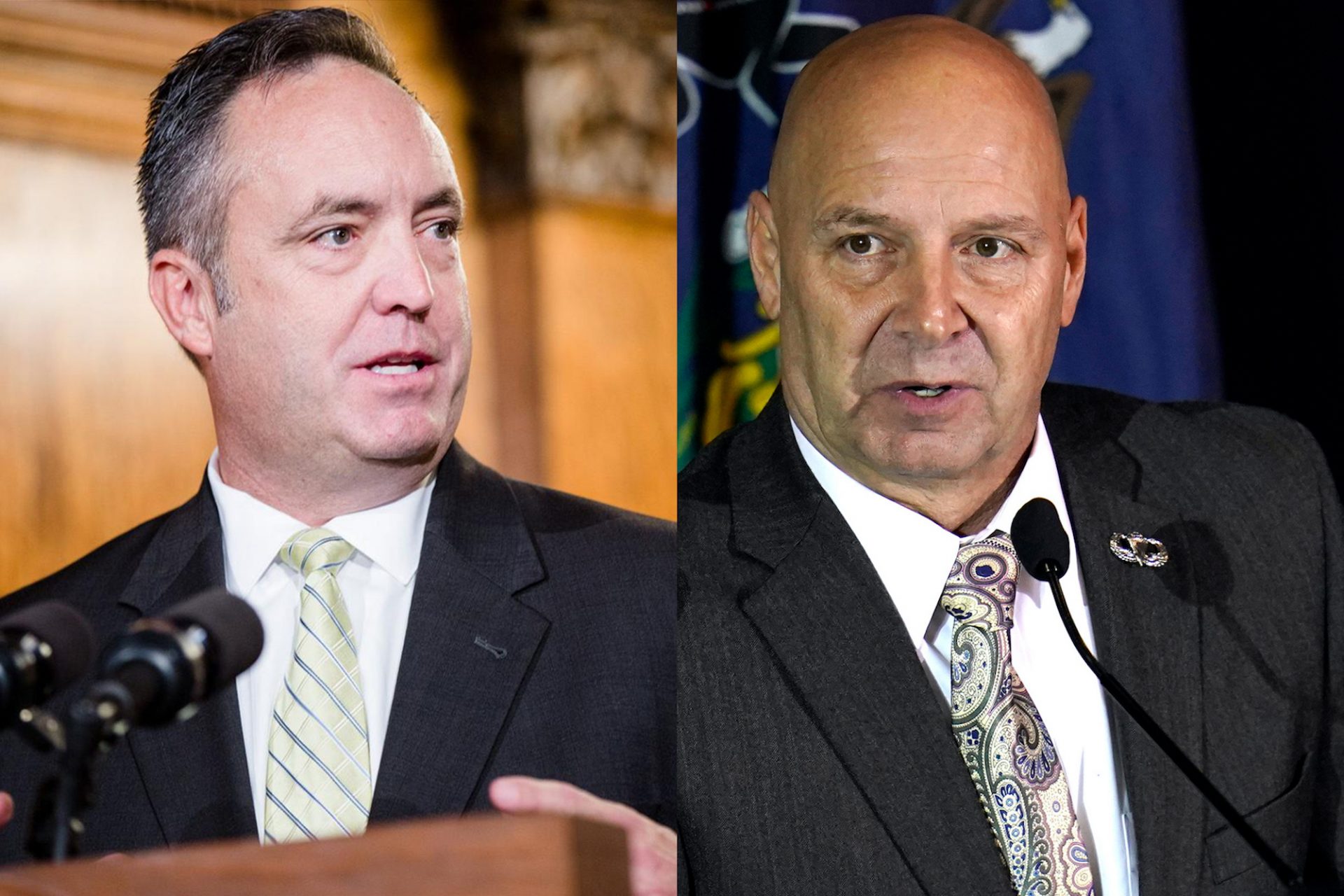 Months after the 2020 election, many Republicans say they’re still being inundated by calls from constituents who believe that the election was invalid. According to Street, GOP members he has spoken to feel stuck in a political time warp.

“They don’t like all the infighting in their caucus,” he said. “Normally, the out-of-power party when it comes to the White House has an opportunity to be critical … in a way that is helpful to them politically. That’s not happening because we’re not talking about things that matter.”

Many Republicans are reluctant to put those thoughts on record, though.

A few have been publicly critical. Sen. Gene Yaw (R-Lycoming) issued a statement just ahead of Corman’s embrace of an audit, saying he supports election reforms and has complaints about the 2020 process, but that an audit would not be “a productive undertaking.”

“Many of the emails I receive [from constituents] want an audit because the sender fully believes that Donald Trump will somehow be reinstated as President,” he wrote. “That is the underlying rationale for many who support an audit. Unless there is a coup, which is not going to happen in the United States, the 2020 election is over.  Biden is the President.”

One of the caucus’s more moderate members — and a potential gubernatorial candidate — Sen. Dan Laughlin (R-Erie), also held himself out as an audit opponent before Corman embraced the idea. In an op-ed, he wrote that performing an audit “absent credible evidence of fraud isn’t going to change the 2020 outcome and will only further the paranoid atmospherics, poisoning both parties.”

Both lawmakers declined requests by Keystone Crossroads to comment on Corman’s recent promises.

Two state-mandated audits of the 2020 election, one a risk-limiting audit of 45,000 randomly-selected ballots, and another a review of at least two percent of each county’s votes, confirmed the results. The election investigation ordered up by Arizona’s GOP-led Senate and carried out by tech company Cyber Ninjas has been widely discredited by experts and a bipartisan group of officials, including Arizona Democratic Secretary of State, Katie Hobbs, and Maricopa County’s Republican Recorder, Stephen Richer.

After Mastriano accused Corman of trying to “stonewall” his work to subpoena election materials from three counties to review the 2020 general election and 2021 primary, Corman issued his own scathing statement, saying Mastriano had “retreated from conducting a forensic investigation of the election in Pennsylvania,” and that it is “discouraging to realize that he was only ever interested in politics and showmanship and not actually getting things done.”

Corman stripped Mastriano of his Harrisburg staff and position as chair of the Senate’s Intergovernmental Operations Committee, through which Mastriano had been trying to conduct his audit. Corman replaced him with another Trump-aligned senator, Cris Dush (R-Jefferson), who issued his own statement saying he takes the job “very seriously.”

“There have been stories that Senate Pro Tempore Corman has moved this investigation to me for the purpose of killing it,” he added. “The opposite is true.”

Pa. Republican lawmakers and the U.S. Capitol attack
As part of WITF’s commitment to standing with facts, and because the Jan. 6 attack on the U.S. Capitol was an attempt to overthrow representative democracy in America, we are marking elected officials’ connections to the insurrection. Read more about this commitment.
Sens. Corman, Dush, Mastriano and Yaw are among the state lawmakers who signed a letter asking Congress to delay certifying Pennsylvania’s 2020 election result, despite no evidence that would call that result into question.
This supported the election-fraud lie, which led to the attack on the Capitol.

Corman and Mastriano are still trading insults. Corman insisted to a conservative Pittsburgh radio host that Mastriano is only interested in politicking and that the two “couldn’t come together” on how a new election investigation should go forward. Mastriano circulated a new missive claiming Corman had instructed him not to send letters to counties asking for election materials and threatening subpoenas, and had “obstructed” his efforts to issue those subpoenas before stripping his committee position and staff when Mastriano criticized him publicly.

Meanwhile, Corman is now balancing between two very different visions of what an audit means.

Dush, who is ostensibly running the audit, deferred all requests for comment to Corman. And Jason Thompson, a spokesman for Corman, says the office is still “in the very, very preliminary stages of getting this planned.”

A few details have trickled out. The audit will be run through the Senate’s Intergovernmental Operations Committee, which Mastriano still sits on. Thompson says the goal is not to “re-litigate things about 2020” or overturn that election, but to pinpoint issues with Pennsylvania’s election system and introduce some kind of legislation to fix them.

Corman has said as much too. In a statement, he said he wants to “find any flaws in the system that could be exploited by bad actors and take action to correct those flaws through legislative changes to our Election Code.”

It’s a goal other Republicans have said they share. Democrats, too, have been on board with some level of election reform.

But State Rep. Todd Stephens (R-Montgomery), a moderate who says he has been open to changing election laws in the wake of 2020, notes that he hasn’t felt an audit is necessary for that work.

The House produced a nearly 100-page report on election integrity, he noted. “It provides me with enough information to make an informed decision on the improvements we ought to make to the election system.”

The Senate also produced its own 88 page report, which, like the House’s version, suggests fixing legitimate election infrastructure issues, including increasing the time counties have to sort and process mail ballots and getting voter rolls to update in real time.

But some of Corman’s recent statements seem to contradict his office’s stated goals of focusing on legislative fixes related to the election system.

“I don’t necessarily have faith in the results,” Corman told conservative Pittsburgh radio host Wendy Bell in an interview Monday, the same day he issued the statement laying out his audit vision. “I think there were many problems in our election that we need to get to the bottom of.”

He raised theories of mail ballot boxes being stuffed with potentially invalid ballots, and dead or ineligible people voting in 2020.

Anthony Williams (D-Philadelphia), who sits on the Senate’s Intergovernmental Operations Committee, said hearing that tone from Corman “was kind of surprising.”

Williams and other committee members will be involved with any hearings or subpoenas Corman and Dush decide to proceed with for the audit.

“We don’t know how it’s going to work,” Williams said. “We never got any notice.”

Senate Minority Leader Jay Costa (D-Allegheny) said his caucus is ready to challenge the grounds of the audit effort, but held off on revealing any counter-strategy until he and others have more time to review what’s being proposed.

Other Democratic officials, like Attorney General Josh Shapiro, have said they’re ready to file suit if they think Republicans are acting outside of their official authority. Corman spokesman Thompson notes that’s one of the key reasons GOP leadership wanted Mastriano to stop spearheading the audit: they were worried the effort was moving into legally dubious territory.

“They were already watering at the mouth to try to get this tossed out in the courts,” Thompson said of Democrats.

Meanwhile, onlookers outside of Harrisburg say they have concerns that go beyond the logistics or legality of an audit.

Dan Mallinson, public policy professor at Penn State Harrisburg, said the whole effort is troubling because of the kind of political strategy it’s helping to normalize. All over the country, in states where former President Donald Trump lost the 2020 election, Republicans are engaging with the false idea that the election was either stolen from him or was untoward on a grand scale.

“I think Republicans are trying to figure out how to keep these voters engaged and keep them coming back,” Mallinson said. “And so in the short term, the anger about losing the 2020 election seems like something that may motivate those folks to come out.”

Mallinson argues what’s likely to come next, unless the GOP reverses course, is more talk about perceived wrongs and less about actual policy changes.

“By continuing to feed on those grievances over time, that undermines people’s confidence in government and our system and our democracy,” he said.