Milton I., 50, a resident living with schizophrenia at The Robert Meineker House, wipes his eyes as he speaks about the loneliness caused by social distancing in an empty common area, Wednesday, May 6, 2020, in the Brooklyn borough of New York. Even before the pandemic, access to mental health services in the U.S. could be difficult, including for people with insurance. Now experts fear COVID-19 will make the situation worse. 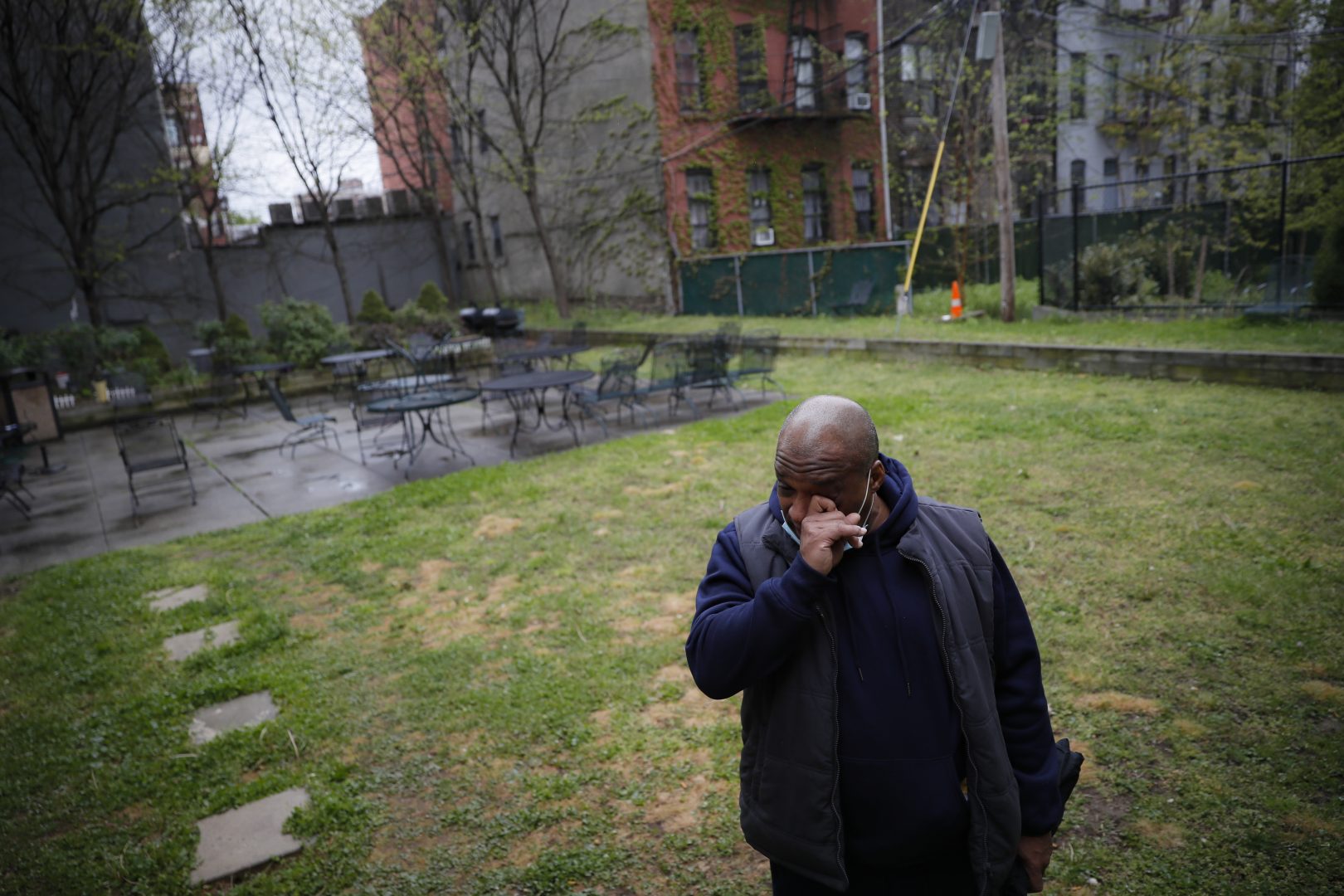 Milton I., 50, a resident living with schizophrenia at The Robert Meineker House, wipes his eyes as he speaks about the loneliness caused by social distancing in an empty common area, Wednesday, May 6, 2020, in the Brooklyn borough of New York. Even before the pandemic, access to mental health services in the U.S. could be difficult, including for people with insurance. Now experts fear COVID-19 will make the situation worse.

Ever since Marty Parrish was 17, he has struggled with bouts of major depression.

“It tends to run in cycles,” recalls the resident, now 58, of Johnston, Iowa, a suburb of Des Moines. “When I’m on medication, and medication is working, my symptoms are alleviated.”

But his symptoms would often return when he had to stop taking medication because of side effects from long-term use. Finding a new medication that worked could take weeks or even months, he says, during which he’d find himself slipping back “into a brain fog, in a dark hole of depression.”

Eventually his mental illness cost him his marriage, business and home. And his treatment came to a halt.

“I could go to a free county mental health clinic and see a counselor, or a therapist,” he says. “I could even get a prescription for medication, but I couldn’t pay for the medication.”

For many Americans who, like Parrish, live with a mood disorder, cost remains a major hurdle to accessing mental health care, according to a survey on mood disorders published this week by the National Alliance on Mental Illness, or NAMI.

Over half of the survey’s respondents (which included people living with mood disorders and their caregivers) said that cost prevents them from trying a treatment they’re interested in, says psychiatrist Ken Duckworth, NAMI’s chief medical officer.

Cost was also the reason for discontinuing treatment for about a quarter of the respondents who were able to get care.

Even finding a mental health care provider can be hard

The survey also revealed that many people don’t even know how to find mental health support.

“Forty-eight percent are unsure if they’re eligible to receive care, and nearly as many are unsure about how to access services,” Duckworth says.

“All of those issues are barriers to care,” notes Sika Yeboah-Sampong, a staff attorney at the advocacy group Legal Action Center and an ombudsman for a New York state program to expand access to addiction and mental health services.

For one, many people with mood disorders are unemployed and uninsured, says David Lloyd, a senior policy adviser at the mental health advocacy group the Kennedy Forum.

“Some of these conditions — they’re particularly disabling [and] can result in people being unemployed,” he says. Losing insurance that way is not uncommon.

But even for people with Medicaid or private health insurance, getting access to therapy and other kinds of mental health support remains complicated, hard to navigate and expensive, Yeboah-Sampong says.

For one, insurers’ directories for in-network mental health care providers “aren’t always accurate or up to date,” she says. It’s not uncommon to find names of providers there who have died, moved away or retired.

And even accurate in-network listings for mental health tend to be small.

Why aren’t more therapists in network?

That continues to be true, according to a 2019 analysis by Milliman, a risk management company.

As a result, a large proportion of therapists and psychiatrists are out of network, she says, and in-network providers are often overworked with long waitlists.

All of this forces people with a mental illness to seek out-of-network care.

“What we see all the time is either a plan doesn’t have any out-of-network benefit at all — in which case you’re paying completely out of pocket — or the much higher cost-sharing for the out-of-network provider,” Lloyd says. That can deter families from reaching out to get the help they need.

Why patients often ration their use of mental health care

Patients will instead pay for as long as they can — say two to three months — “and then, the funds run out, and they have no care,” Yeboah-Sampong says.

Ultimately, these hurdles to getting mental health care produce a lack of parity between insurance coverage of mental and physical health, she adds, despite the 2008 Mental Health Parity and Addiction Equity Act, which requires insurers to cover mental health the same way they cover physical health.

“There’s just a lack of enforcement [of] the federal parity law,” Yeboah-Sampong says.

Any money insurers save there shows up as other costs, Lloyd notes — untreated mental illness is closely linked to poorer physical health. And then, there are costs associated with disability and unemployment. “And of course, we’ve seen huge spikes in fatal overdoses over the last year,” he adds.

With the rise in mental health symptoms during the pandemic, he says, it’s even more urgent to improve access to care for everybody. People are now more open to discussing their mental health, this week’s survey notes.

People who do get treatment find it helpful

“The public is beginning to recognize in a new way that mental health is a health care priority, and a large percentage of people seem to appreciate that it could happen to anyone,” Duckworth says.

The survey also found that when people were able to get treatment, the majority — 70% — found it helpful.

After years of homelessness, Parrish was eventually able to get the mental health support — including the medications — he needed to get his health and life back. He credits his recovery to the undying support of one person in his life.

“I ultimately found support in an individual who later became my wife — who understood the challenges [I] faced,” he says. She “was down there with me, even to the point of assisting by taking me to appointments, to make sure that I got my medications.”