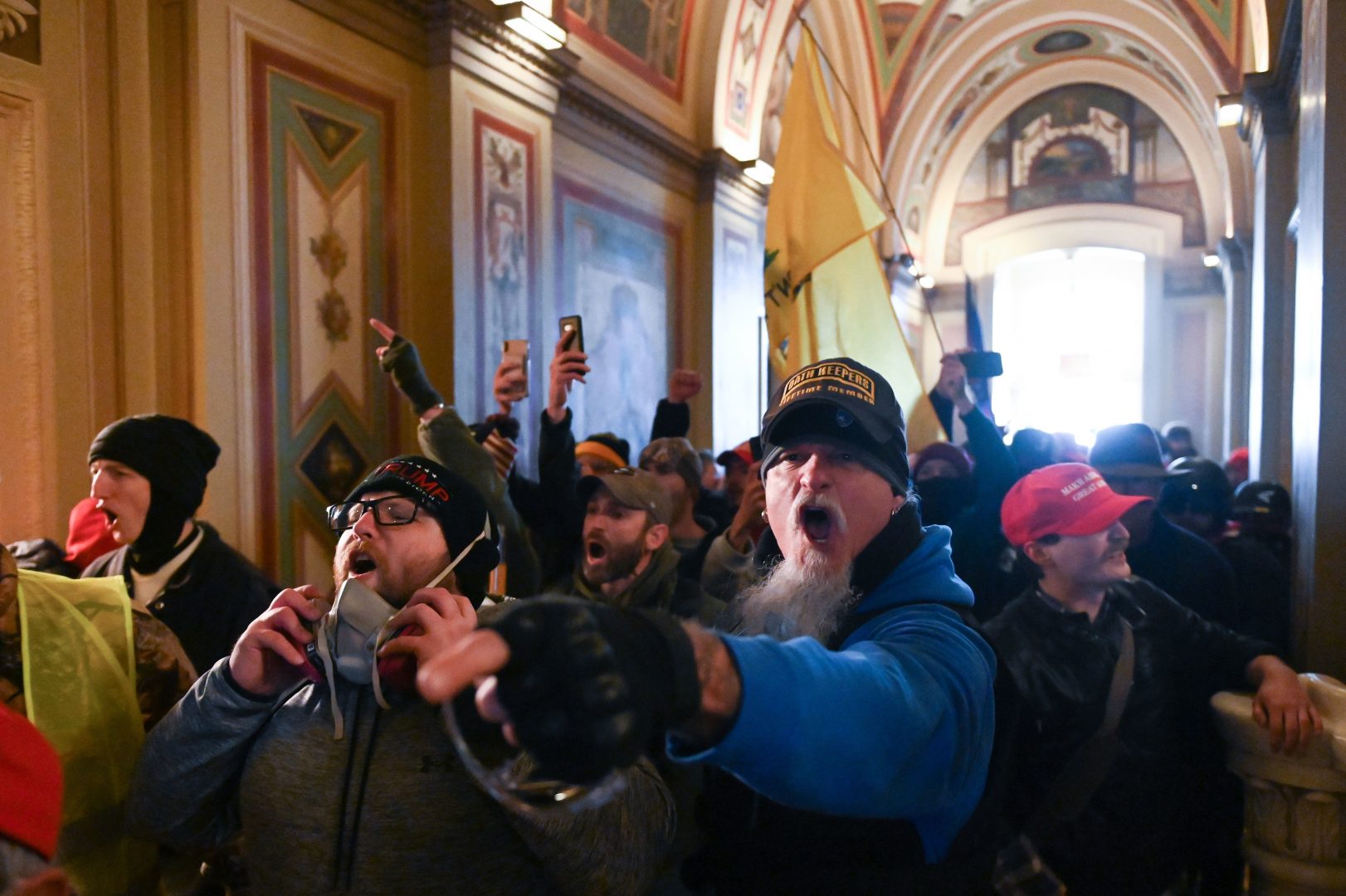 (Harrisburg) — The latest Franklin & Marshall College poll shows Pennsylvanians, including those who say they’re politically conservative, still hold an overwhelmingly negative view of the Jan. 6 attack on the U.S. Capitol.

F&M’s survey is one of the first statewide polls taken on the events of the attack since it happened eight months ago.

Researchers asked a group of 450 Pennsylvanians of varying backgrounds from across the state to weigh in on this question:

“Do you think it would be good or bad for our democracy if the events that took place at the capitol on January sixth happened after every election?”

85 percent said that scenario would be bad, including 66 percent of people who identify as Republican and 77 percent of those who consider themselves conservative.

Over the course of several hours on the afternoon of the 6th, large groups of protestors supporting former President Donald Trump marched on the Capitol and stormed the building, temporarily interrupting the day’s Electoral College certification proceedings and injuring more than 150 law enforcement officers. Five people died during the events from various causes.

At least two Pennsylvania political figures, state Sen. Doug Mastriano (R-Adams) and former Republican state Rep. Rick Saccone, were photographed together in D.C. around the time of the attack. Mastriano appears to walk through initial police barricades in several internet sleuth videos, while Saccone said in a social media video that he and others were planning to run “RINOs that have betrayed our president” out of the Capitol.

Survey participant Barbara Delp of Philadelphia, a self-described Republican-turned-Democrat, said she watched the events that day unfold on television “horrified.”

“You just kept thinking, ‘No, this isn’t America! This can’t be happening two hours south of me,’” Delp said. “I just couldn’t believe it. It was like it was some bad movie.”

Delp said even though she sympathized with those who felt “disenfranchised politically,” she said never wants to see that type of attack happen again.

“I don’t want that [to be] the path that we turn down. I don’t want to see that that’s the way that America responds to dissent,” she said. 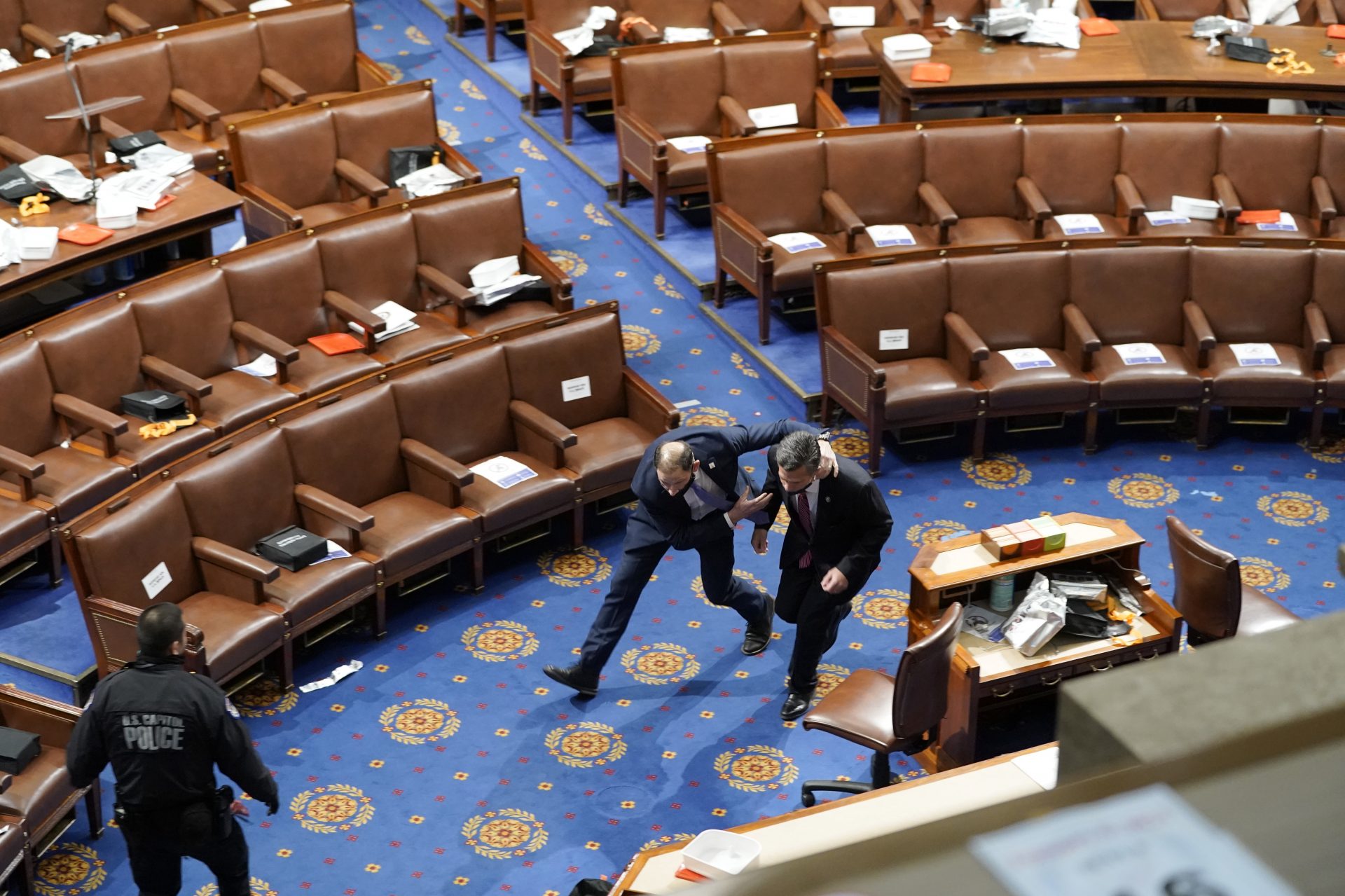 Members of congress run for cover as protesters try to enter the House Chamber during a joint session of Congress on January 06, 2021 in Washington, DC. Congress held a joint session today to ratify President-elect Joe Biden’s 306-232 Electoral College win over President Donald Trump. A group of Republican senators said they would reject the Electoral College votes of several states unless Congress appointed a commission to audit the election results.

Joel Sears of York, who said he’s conservative, didn’t participate in the poll. But he said he has friends who were near the Capitol on Jan. 6, and neither he nor those in that group have much sympathy for those that stormed the building.

“One of the things that makes our country different from others, or at least up to this point, is that we really don’t embrace mob rule,” Sears said. “We have to suck it up sometimes and that we have to wait for an outcome through the process.”

“The idea that we’re going to get what we want by having a temper tantrum, to me, is antithetical to the intention of the Founding Fathers.”

Sears explained he didn’t have any issue with the demonstration that took place before rioters made their way through police lines.

“People in this country have a right to…peaceably assemble, to raise grievances to whatever body they happen to have a grievance with,” he said “I don’t have a problem with that. But that’s where it should end.”

Many rioters have said their intention was to stop Congress from certifying Joe Biden’s victory on January 6th.

And just hours after the violence ended, 138 members of Congress, eight of them from Pennsylvania, voted to throw out the state’s electoral college vote — without evidence calling it into question.

A number of Republican members of Congress condemned the day’s violence. Senate Minority Leader Mitch McConnell pointed to former President Trump as being “morally responsible” for the attack, calling it “disgraceful.”

But in Pennsylvania, Republican state legislative leaders have been hesitant to discuss the attack, instead choosing to focus the party’s efforts on election law changes that were ultimately vetoed by Gov. Tom Wolf in the spring. Wolf has floated reconsidering the package that was passed on a largely party-line vote.

“You didn’t hear a lot from my colleagues on the Republican side about re-litigating the past election. We’ve all moved on,” Rep. Seth Grove (R-York) said during an election-related House State Government hearing in January. Grove chairs that powerful committee.

Grove also hosted a press conference shortly after the November 2020 election claiming that Dominion Voting Systems had been scheduled to appear at that press conference, but canceled. He asserted that was proof that they had “something to hide” about the way their machines operated in 14 counties. Dominion has since sued Fox News, former President Trump and others over claims that their systems were rigged.

Pa. Republican lawmakers and the U.S. Capitol attack
As part of WITF’s commitment to standing with facts, and because the Jan. 6 attack on the U.S. Capitol was an attempt to overthrow representative democracy in America, we are marking elected officials’ connections to the insurrection. Read more about this commitment.
Rep. Grove (R-York) and Sen. Mastriano (R-Adams) are among the several dozen state lawmakers who signed a letter asking Congress to delay certifying Pennsylvania’s 2020 election result, despite no evidence that would call that result into question.
This supported the election-fraud lie, which led to the attack on the Capitol.