FILE PHOTO: Freddie Davis poses for a photo in his apartment June 21, 2021, in Miami. Davis, a truck driver who lost his job during the pandemic, saw his rent increase from $875 to $1,400 a month. He applied for rental assistance but his landlord refused to take it. 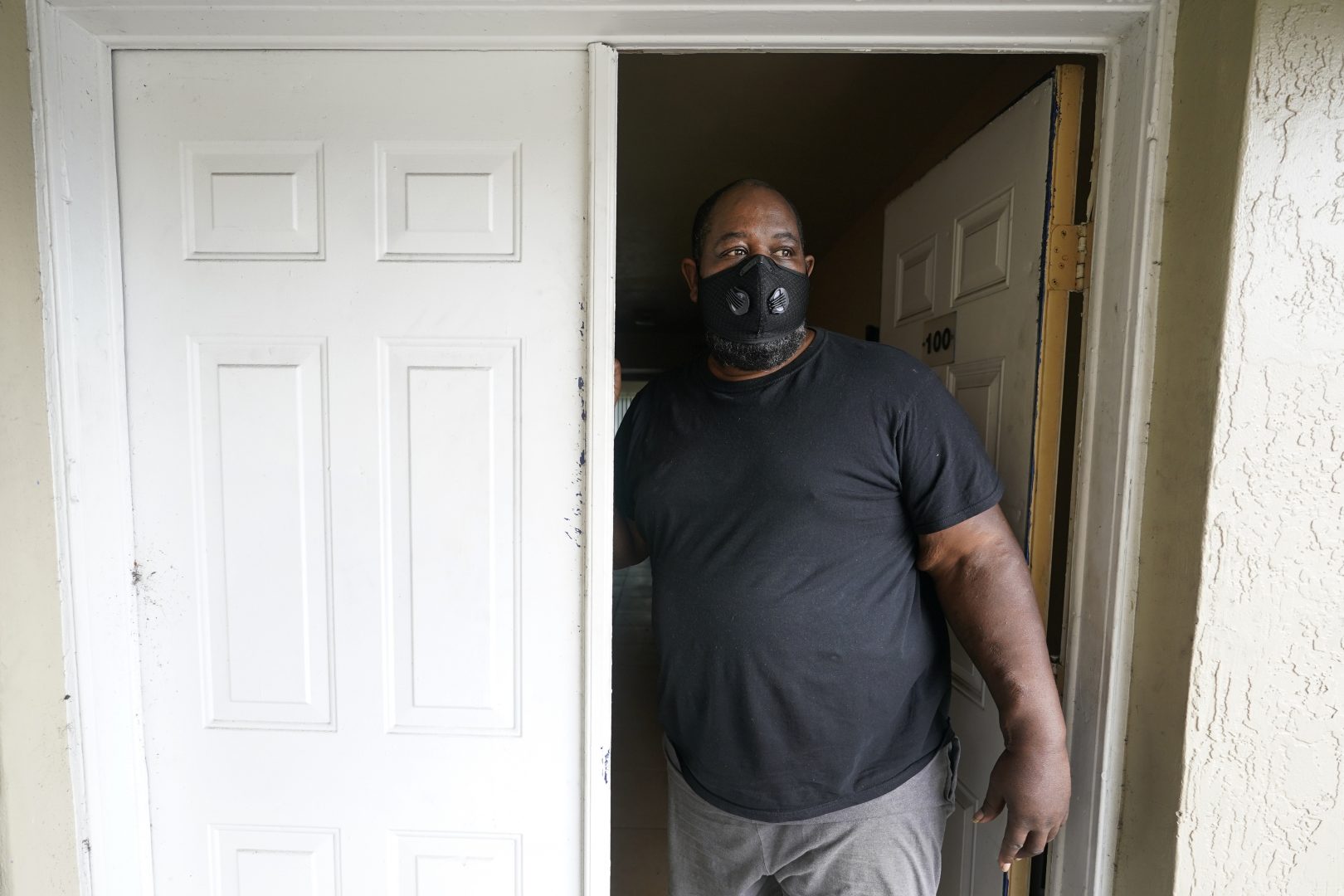 FILE PHOTO: Freddie Davis poses for a photo in his apartment June 21, 2021, in Miami. Davis, a truck driver who lost his job during the pandemic, saw his rent increase from $875 to $1,400 a month. He applied for rental assistance but his landlord refused to take it.

(Philadelphia) — Bucks County officials are urging other counties to make use of a legal ruling they recently won, and pause eviction proceedings for the thousands of Pennsylvanians who are vulnerable to being thrown out of their homes.

A pandemic-era federal moratorium on evictions ended August 3. And though Pennsylvanians who owe back-rent can now qualify for relief money through their county, there can be a lag before they actually receive the funds — leaving them at the mercy of landlords who might throw them out.

“This is a problem in counties across the commonwealth, and really across the country,” said Josh Goldblum, a managing attorney at Legal Aid of Southeastern Pennsylvania. “People are getting evicted when there’s money waiting to fix the problem. It’s maddening.”

That concern was why, in June, Legal Aid asked courts in Bucks, Montgomery, Delaware, and Chester Counties to delay eviction cases to give people enough time to get their relief money. Two county courts argued they didn’t have that authority, according to Legal Aid, but Bucks went ahead and issued an order allowing eviction delays in certain cases.

So long as a person had applied for rent relief through the Bucks Emergency Rental Assistance program, or BERA — which disburses federal relief funds — the judge ruled that the renter could submit a request to a magisterial district judge, who could then stay their eviction for 30 days.

Bucks court administrators asked the state Supreme Court to rule on its decision, and the justices upheld it — meaning it can now likely be legally applied to any county in the commonwealth.

Pennsylvania’s Acting Secretary of Human Services Meg Snead called the Bucks approach “really innovative” in a press conference with county officials Tuesday, and noted other counties have also taken steps to make sure people aren’t evicted before they get the aid for which they’ve qualified.

Philadelphia, she said, has a “robust” diversion program, as do Delaware, Montgomery, and Allegheny Counties. Now she wants to see those practices expand — especially since counties have new legal authority thanks to the Pennsylvania Supreme Court opinion.

“There’s something that they can replicate that’s already been established and confirmed by the courts in Bucks County,” she said. “That’s a good direction for them to go in.”

Democratic State Sen. Maria Collett, who serves parts of Bucks and Montgomery Counties, notes that in conversations with her more conservative colleagues in GOP-controlled Harrisburg, one point of contention that often arises when discussing things like eviction moratoriums is how they’re going to affect landlords.

She thinks that’s why some counties — particularly conservative ones — have been “reluctant, resistant” to setting up something like Bucks’ BERA program. But she thinks now that so much federal money is flowing, there’s a lot of potential for finding common ground.

“Our goal really is to make sure that landlords are taken care of too, that we’re not seeing landlords suffering with a loss of revenue from their rental properties simply because we want to make sure that people don’t end up homeless because of this pandemic,” she said.

“The biggest barrier is making sure that counties are utilizing the resources that they have coming to them,” she added.

All told, Pennsylvania has so far received $847 million in the federal government’s first round of rental assistance funding, and is expecting $670 more via the American Rescue Plan. Statewide, Snead said, 30,500 people had applied for rental relief as of June 30, and counties had awarded $133 million.

The state oversees 47 counties’ distribution of the federal funds, and 18 larger counties manage the process on their own.

In Bucks, which manages its own distribution efforts, officials estimate that they’ve so far paid aid to more than 1,000 households, and they’re still processing 4,000 cases.

There’s no maximum amount for assistance, but there is a time limit: 18 months of assistance per applicant.

Applicants qualify if they make 80% of the area median income or less — in Bucks County, for instance, a family of four making $77,300 or less, or an individual making $54,150 or less would qualify.

It’s not the only layer of protection currently available for some Pennsylvanians. Federal officials recently issued an order freezing evictions in counties “with heightened levels of community transmission” of COVID-19 through at least Oct. 3.

Currently, the CDC has 48 of the commonwealth’s 67 counties classified as having “high” or “substantial” transmission, and so they meet that threshold.

What renters in Pa. need to know about available relief, the new eviction ban