Lori Horowitz holds a piece of raccoon rabies vaccine bait, which is made out of compressed fish meal and fish oil. 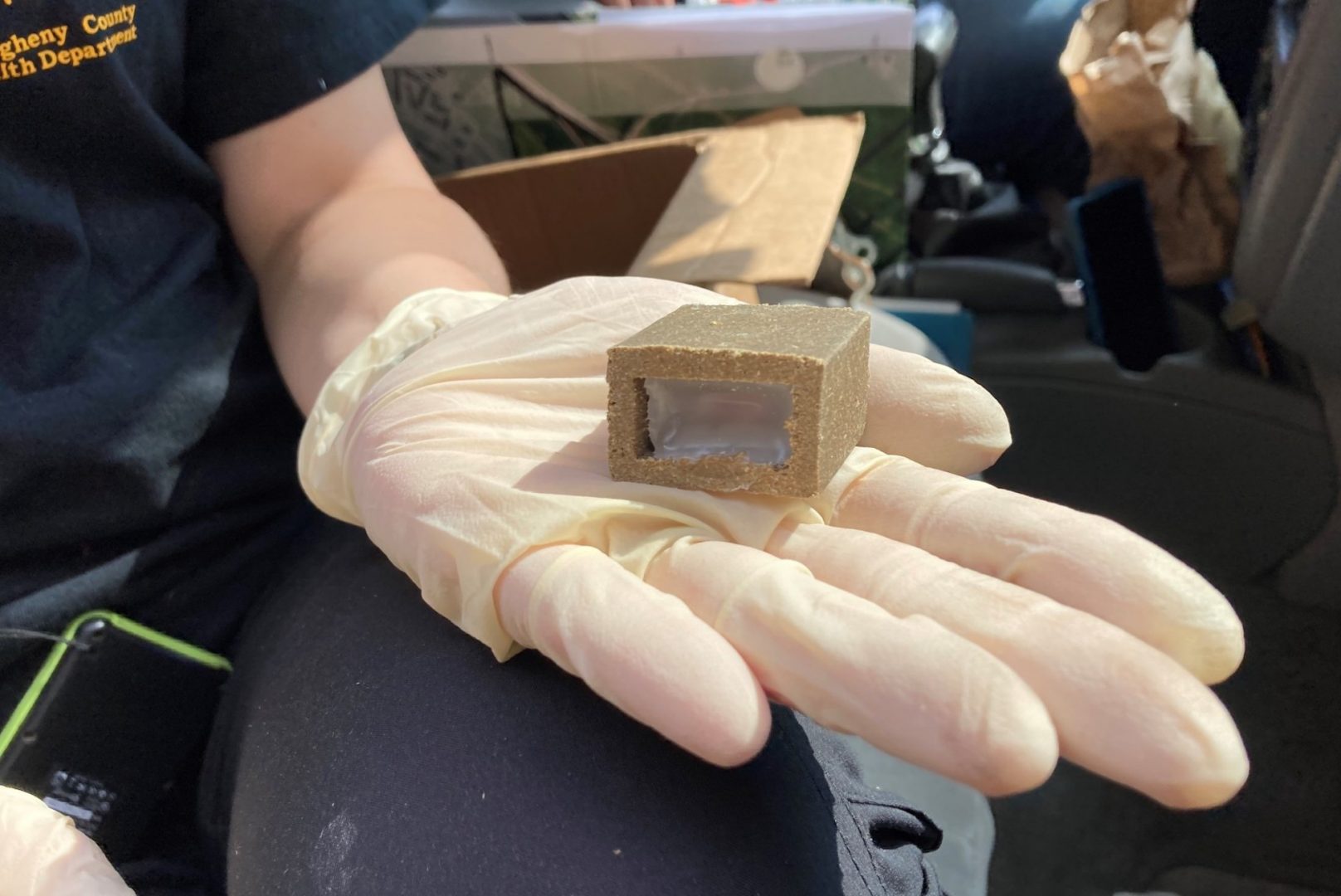 Lori Horowitz holds a piece of raccoon rabies vaccine bait, which is made out of compressed fish meal and fish oil.

(Pittsburgh) — The best place to put rabies vaccine bait is where raccoons will find it, but pets and humans won’t. That’s why Lori Horowitz steered clear of the dumpster behind a Natrona Heights apartment building, and instead tossed several pieces of vaccine bait over a fence into a copse of trees.

Horowitz is 1 of about 85 Allegheny County employees and volunteers who are scattering doses of oral rabies vaccine bait across the Pittsburgh area, which the U.S. Department of Agriculture says is key to its goal of raccoon rabies eradication. Therefore, Horowitz and others are putting bait in bushes, down sewage drains, and on the lawns of abandoned houses, in hopes that raccoons will find and consume the vaccine.

The USDA said it has provided the county with some 40,000 doses, which are each encapsulated in hard, waxy cubes of fish meal that measure about 1-by-1 inch. The bait is not toxic to humans or pets, but it does smell like rancid dog food or decaying fish. 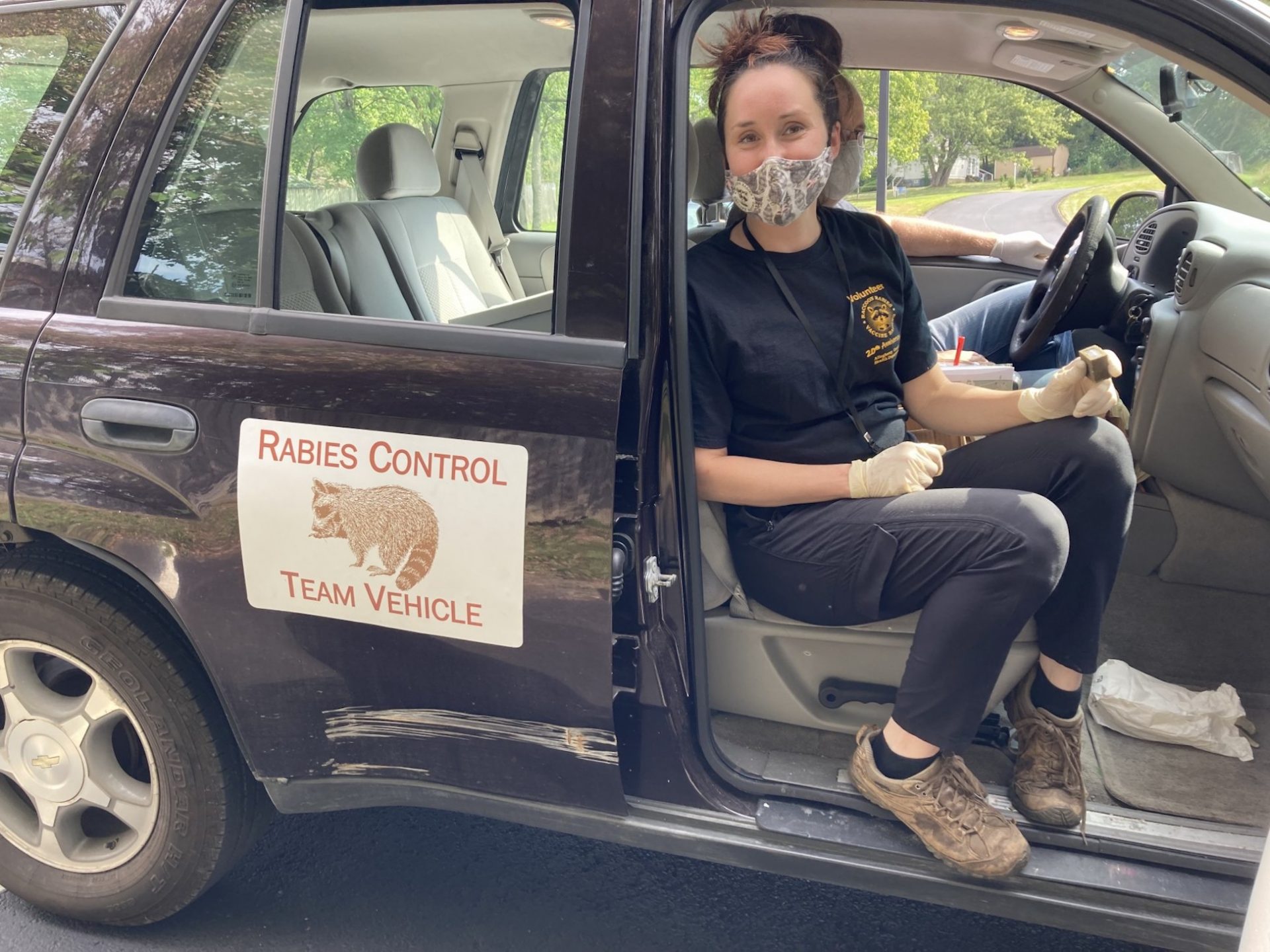 Allegheny County Health Department employee Lori Horowitz was one of about 85 people who scattered rabies vaccine bait across the county.

“I have been throwing a bait and got a piece of fish meal in my mouth. And it is not a pleasant experience,” said Horowitz.

Rabies can infect any mammal, though in the U.S. raccoons are the species most likely to carry the disease. Fatalities are rare as the U.S. averages 1-3 deaths a year. Though if someone is bitten or scratched by a rabid animal and then doesn’t get the post-exposure prophylaxis vaccine soon after, they almost certainly will die. Every year, some 55,000 get this expensive treatment, which is not always covered by health insurance.

Most raccoons live in urban environments because human trash is a great food source, and sewers are an easy way for the animals travel. Pittsburgh is the westernmost U.S. city where raccoon rabies is found.

“If we can’t figure out how to get rabies out of Pittsburgh, then we’re not sure how we’re going to get it out of larger cities like Philadelphia, New York, whenever we reach those,” said USDA wildlife biologist Amy Hess, who runs the rabies vaccination program in Pennsylvania.

This year, the USDA is ramping up its air operations with some 400,000 doses being dropped in western Pennsylvania, half of which will be in the Pittsburgh area. Roughly 200,000 additional baits will be distributed in other parts of the commonwealth.

At the Allegheny County Airport, Hess opened a box of the air bait. The packaging is much lighter than the ground bait, and resembles condiment packets from a fast-food restaurant. Another change to the USDA’s 2021 rabies mitigation plan is that in addition to the fish-flavored bait, a vanilla-flavored bait will be distributed on the western edges of the county.

“Raccoons change their diet of the course of the season. So, a lot of times in the summer, they do like sweet stuff,” said Hess.

For a while, the Appalachian Mountains acted as a natural barrier that kept rabid raccoons in eastern cities. But in the mid-1990s, they made it over the mountains, which spurred the federal government to take up mitigation efforts. The work has paid off. The USDA says it has stopped the spread of raccoon rabies, and it estimates that without the more than two decades of mitigation, that the variant could have spread as far west as Wisconsin and as far south as the Texas-Louisiana border.

“Right now, rabies can cost up to $500 million just for treating and managing it here in the East Coast,” said Hess. “So, could we imagine those projections if raccoon rabies actually made it west? It would be astronomical.” 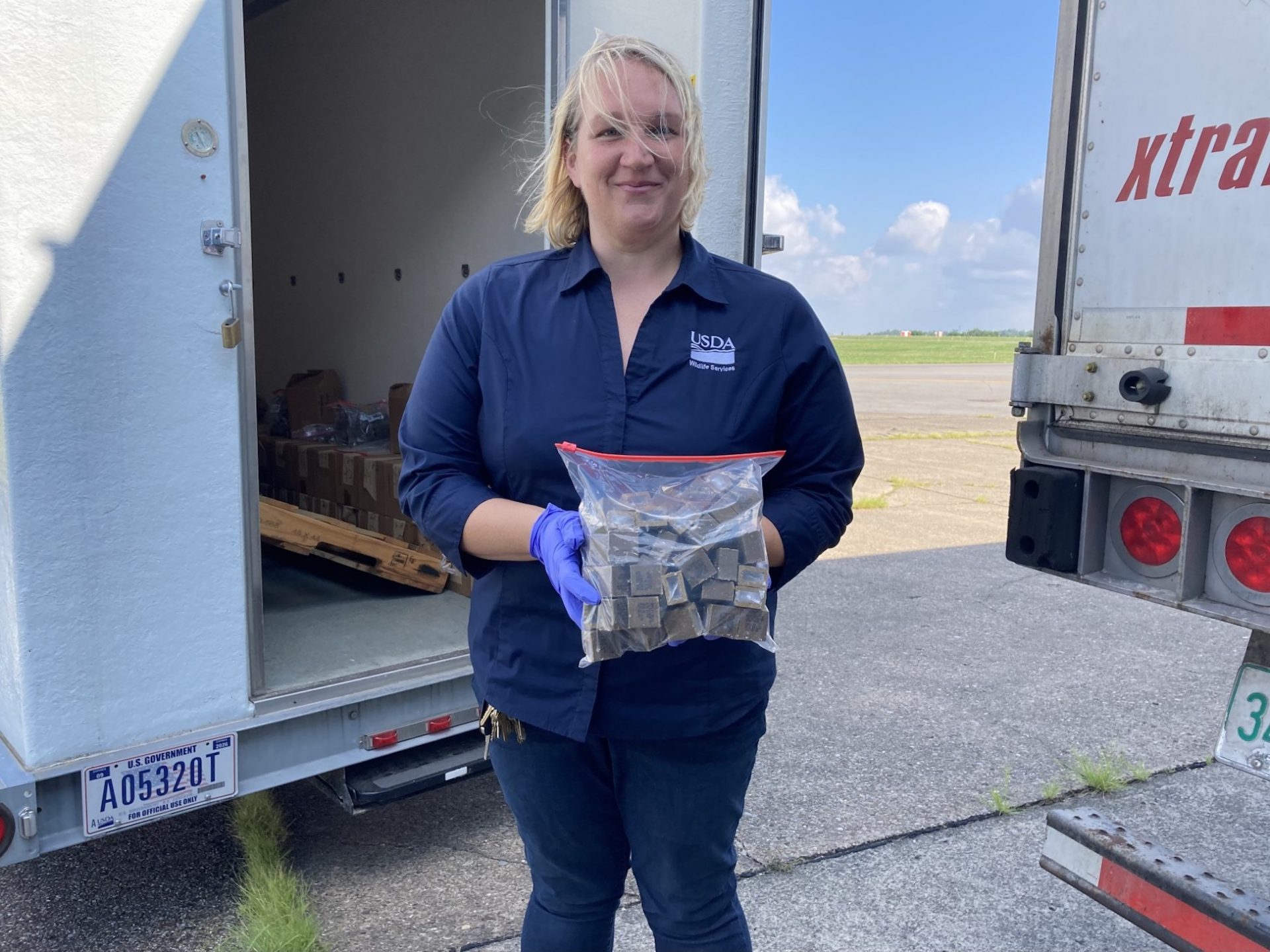 Now, the USDA says its goal is to push rabies back east until it’s fully eradicated.

That might be possible, considering the success that parts of Canada have had in dramatically decreased rabies among its raccoons. To keep it that way, Ontario’s Ministry of Northern Development, Mines, Natural Resources and Forestry helps fund USDA mitigation efforts. Since 2013, the ministry says the province has been providing 25% of the USDA’s raccoon rabies bait that are distributed along the Ontario-New York border.

Animal behavior researcher Suzanne MacDonald, who specializes in urban raccoon populations, supports this use of her tax money. That’s because there is a particularly dense population of raccoons in Toronto, Ontario. If raccoon rabies reached the city, MacDonald said it could create a public health disaster.

“In urban areas, the contact between raccoons is much higher. So that’s why we’re worried about the greater Toronto area, because it’s so connected,” said MacDonald who teaches at York University. “Once it gets in, it’s not going to die out.”

Next month, USDA workers plan to take blood samples from live raccoons to see what percentage found and ate the vaccine bait. In previous years, up to half the raccoons sampled were immunized. This year, the USDA hopes to hit 70%.