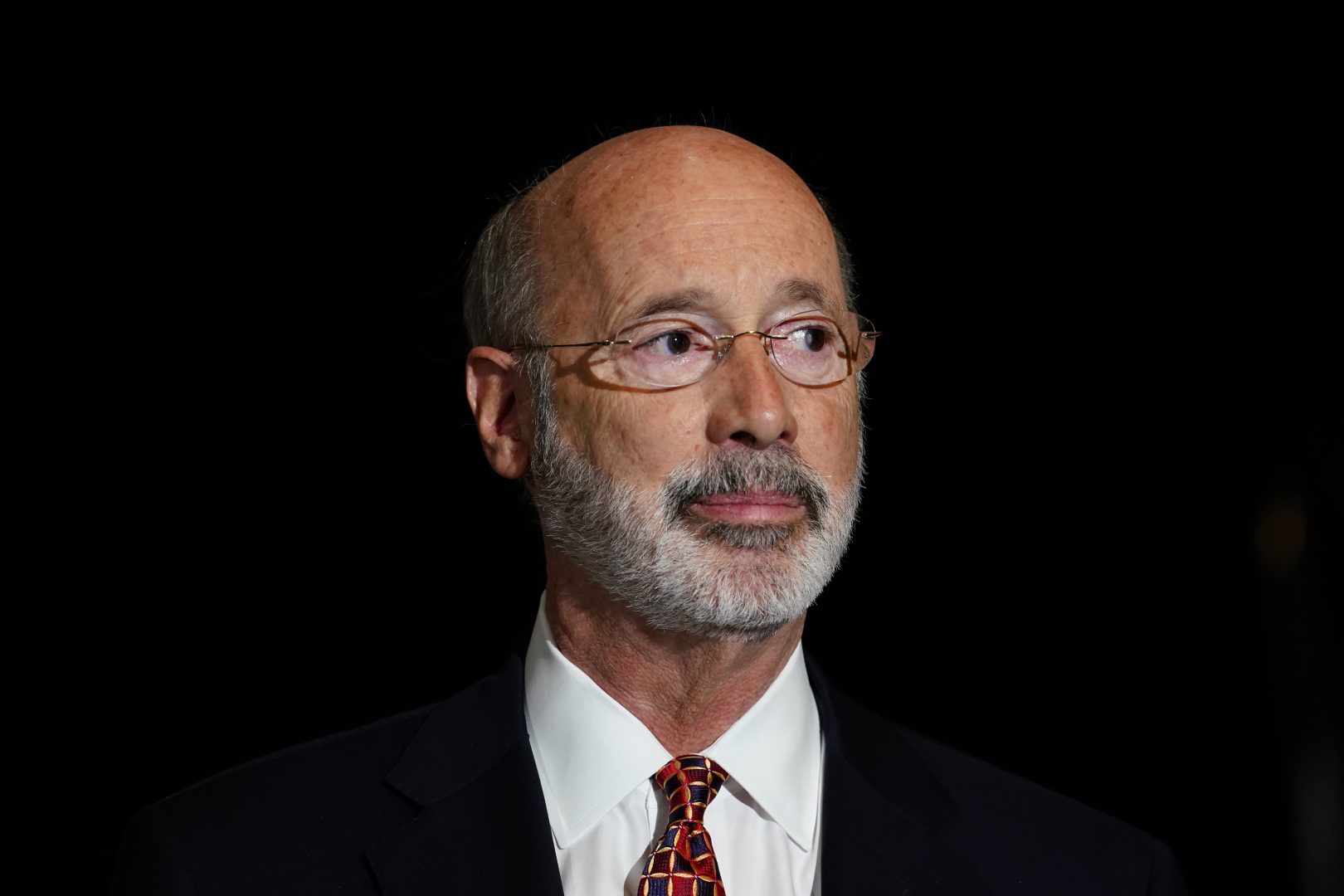 (Harrisburg) –– Gov. Tom Wolf is rolling out a two-tiered campaign aimed at vaccinating more of the thousands of employees under his office’s supervision.

Starting Sept. 7, any executive branch employee who works in a congregate setting like a nursing home or prison must either get a vaccine or get tested for the coronavirus each week. The Governor’s Office says those tests will be free for workers.

But any of the 72,000 or so executive branch workers who gets or has gotten a shot in the arm will get something in return: a free day off, anytime between October and next June, so long as they sign a form confirming they got a shot.

“We just need to do this kind of thing to get more people to do the right thing: get the vaccine, be the shield we need you to be to keep Pennsylvanians safe,” Wolf said at a rainy news conference in Harrisburg.

Wolf stressed this is not a vaccine mandate, just encouragement. He and his staff pointed to Pennsylvania’s vaccination rate overall, which has been above the national average of late, as proof that people have largely volunteered for shots on their own.

Data gathered by the Centers for Disease Control and Prevention says 53.1 percent of all people in the state have been fully vaccinated as of Tuesday. That includes those who are 12 years old or younger, who aren’t eligible for COVID-19 vaccines right now. The U.S., meanwhile, lags behind by a few percentage points: 50.1% of people nationwide have gotten a full vaccine course.

Pennsylvania’s vaccination rate is even better among those 12 and older, 61.3 percent of whom have been fully vaccinated. But the nationwide surge in cases tied to the more-contagious delta variant — especially in places where vaccination rates are low — has health authorities and government leaders like Wolf worried. Across Pennsylvania, there were nearly 4,100 positive COVID-19 cases over a recent three-day stretch.

“We’re not in the hot spot, but we have no reason to be complacent. We’ve got to keep working,” Wolf said.

The Democratic governor’s new “vaccine or test” policy somewhat mirrors that of President Joe Biden, who says federal employees must now get vaccinated or submit to regular testing if they want to keep working for the government. It’s part of a larger nationwide push, as Democratic-controlled states like New York and California institute similar requirements for state employees. GOP strongholds like Florida and Texas, meanwhile, have outlawed any requirement to show proof of vaccination.

Separately, as the start of the new school year draws near in many places, Wolf said the commonwealth will not require kids, teachers or staff at public schools to wear masks.

The governor has held fast to that pledge for weeks. His reaffirmation comes as places like the School District of Philadelphia are putting their own masking requirement in place for students and staff. The union representing teachers there said it also favors a “negotiated vaccine mandate for staff.”

Nine states, including New York, have implemented new mandates aimed at curbing the spread of the more contagious variant indoors. The issue continues to be a political lightning rod in other states like Florida, where Republican Gov. Ron DeSantis is threatening to withhold the salaries of school leaders who require mask-wearing.

Wolf says it will be up to local school districts and governments to impose any new masking requirement in Pennsylvania, though the commonwealth is strongly encouraging vaccinated and unvaccinated people to wear masks indoors.

“No one’s going to make you wear it,” he said. “The police aren’t going to be there to enforce that. But I think what I’ve learned from growing up in Pennsylvania is that we care about each other, and if you [say] ‘please wear a mask,’ [people] will do that to keep others safe.”