People embark a ferry during an evacuation from Kochyli beach as wildfire approaches near Limni village on the island of Evia, about 160 kilometers (100 miles) north of Athens, Greece, Friday, Aug. 6, 2021. Thousands of people fled wildfires burning out of control in Greece and Turkey on Friday, including a major blaze just north of the Greek capital of Athens that claimed one life, as a protracted heat wave left forests tinder-dry and flames threatened populated areas and electricity installations. 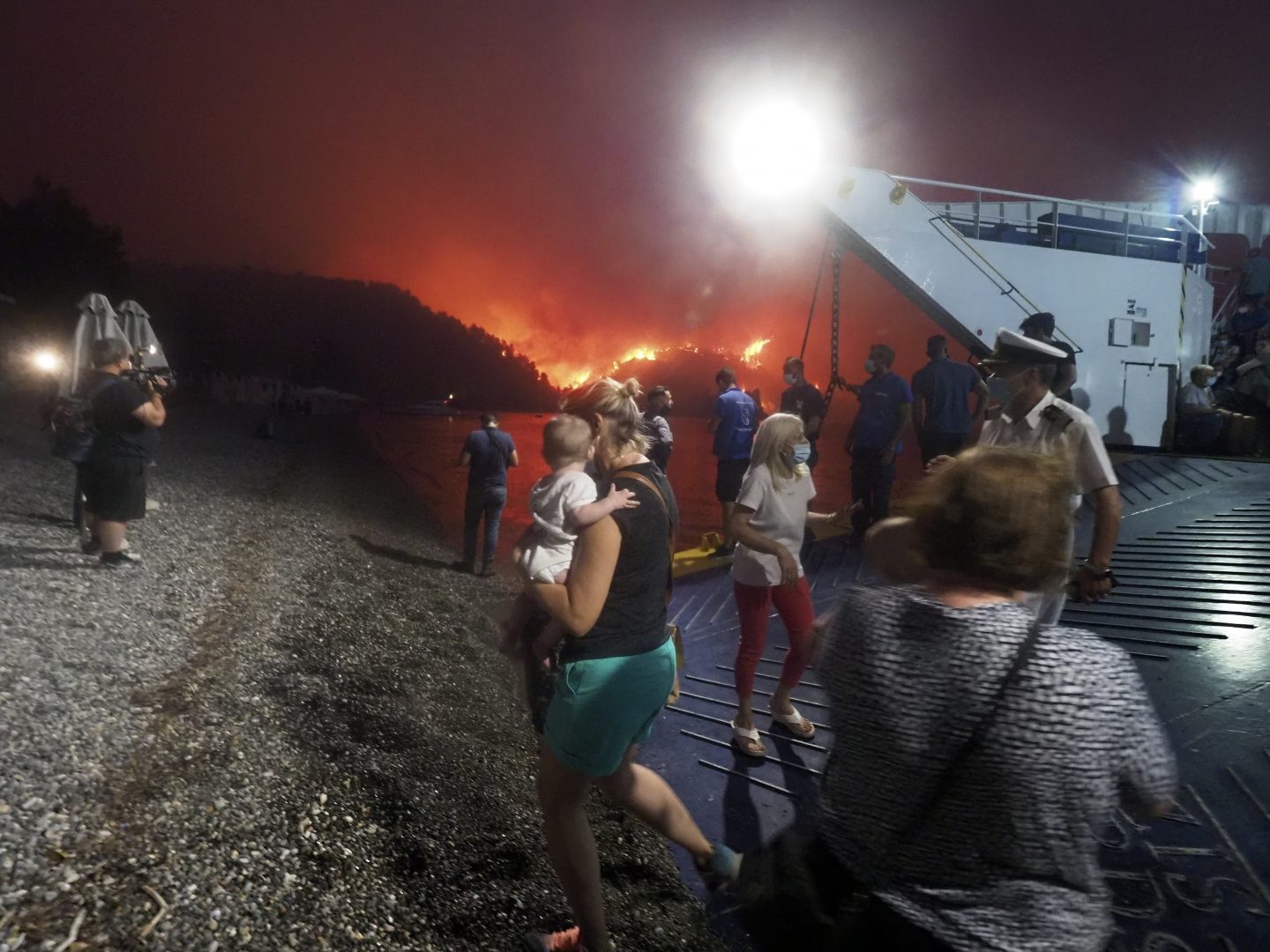 People embark a ferry during an evacuation from Kochyli beach as wildfire approaches near Limni village on the island of Evia, about 160 kilometers (100 miles) north of Athens, Greece, Friday, Aug. 6, 2021. Thousands of people fled wildfires burning out of control in Greece and Turkey on Friday, including a major blaze just north of the Greek capital of Athens that claimed one life, as a protracted heat wave left forests tinder-dry and flames threatened populated areas and electricity installations.

Global climate change is accelerating and human-caused emissions of greenhouse gases are the overwhelming cause, according to a landmark report released Monday by the United Nations. There is still time to avoid catastrophic warming this century, but only if countries around the world stop burning fossil fuels as quickly as possible, the authors warn.

The message to world leaders is more dire, and more unequivocal, than ever before.

“It is indisputable that human activities are causing climate change,” says Ko Barrett, the vice chair of the U.N. Intergovernmental Panel on Climate Change (IPCC) and the senior adviser for climate at the U.S. National Oceanic and Atmospheric Administration. “Each of the last four decades has been the warmest on record since preindustrial times.”

The authors — nearly 200 leading climate scientists — hope the report’s findings will be front and center when world leaders meet for a major climate conference in November.

Penn State climate scientist Michael Mann, who contributed to IPCC reports in 2001 and 2007, says there’s no doubt that climate change is caused by our overuse of fossil fuels.

“The devastating extreme weather events wouldn’t have happened in the absence of human caused warming,” he said. “These stronger storms, bigger storms with bigger storm surge on top of sea level rise present an extreme threat to our coast lines, and those cities like Philadelphia that have a direct connection to our coast lines.”

But Mann says the report also offers hope that some of the worst impacts could be avoided if we drastically reduce fossil fuel use.

“We can prevent it from getting worse if we act dramatically and here in Pennsylvania there’s real opportunity to do that,” he said. “We have an abundance of wind and solar energy. We can be part of that necessary transition away from fossil fuels toward a clean energy economy.”

Pennsylvania is expected to get hotter and wetter. Officials say the state’s average temperature will rise 5.9 degrees Fahrenheit by the 2050’s compared to the last half of the 20th century. Heavier and more extreme rainfall will continue to worsen in the state.

The effects of warming are obvious and deadly around the world. Heat waves, droughts and floods are killing people and disrupting lives around the world this summer. Wildfires are burning with unprecedented frequency and intensity, including in places that used to rarely burn. Smoke and smog are choking people in cities and towns from Asia to the Arctic. Ocean heat waves are threatening entire ecosystems and supercharging hurricanes and typhoons.

The science is clear: Human-caused emissions of carbon dioxide and other greenhouse gases are the primary driver of such changes.

One of the biggest recent advances in climate research is in the field of so-called attribution science, which ties global warming to individual weather events such as hurricanes or heat waves. Scientists can now say with certainty that humans are causing more extreme weather, including heavy downpours and extended heat waves and droughts.

“This whiplash — this increase in both extreme wet and dry events — is projected to increase through the 21st century,” says Kim Cobb, one of the report authors and a paleoclimate scientist at Georgia Institute of Technology.

This is the first time that paleoclimate researchers, who study the climate of the past to understand how Earth will change in the future, have helped write every chapter of the report. Their work helps put today’s climate in perspective. “We can now say global surface temps are reaching levels not seen in 100,000 years,” says Cobb. “The rate of warming since 1970 is higher than any 50-year period in the last 2,000 years.”

The report also confirms that global sea level rise is accelerating. Globally, sea levels rose about 8 inches on average between 1901 and 2018, although the water rose much more in some places, including in some cities on the East Coast and Gulf Coast of the United States.

One of the places where the rate of sea level rise is highest is coastal New Jersey.  State climatologist David Robinson, who is also one of the report’s authors, says sea level rise could make future events like the 2012 Superstorm Sandy even more devastating.

“One can look locally and regionally, and that includes the Jersey coast where we have concerns about changes in storm intensity but the real concern is the rising sea level,” Robinson said. “The coast is going to become more vulnerable.  A weaker storm than Sandy could end up doing the same damage from a storm surge, because it’s starting at a higher level.”

Sea level rise is primarily driven by melting glaciers, and Arctic ice. There’s a lag between emissions and ice melting, which means even if humans were to stop all greenhouse gas emissions today, sea levels would continue to rise for a few decades, the report notes.

“Sea level change through the middle of this century has largely been locked in,” says Bob Kopp, one of the report’s authors and the director of the Institute of Earth, Ocean and Atmospheric Sciences at Rutgers University. That means no matter what, people living in coastal areas will need to adapt to higher seas. 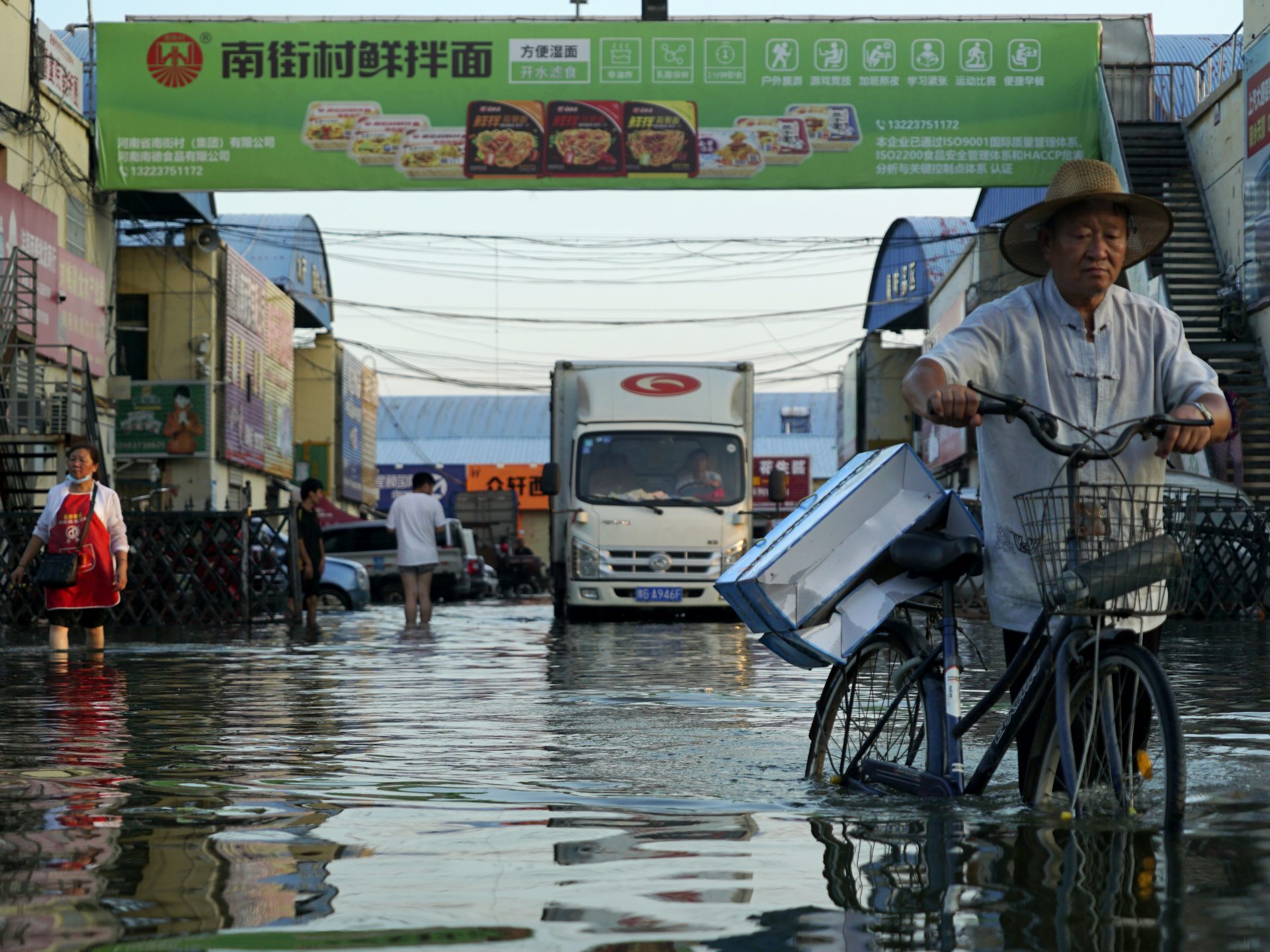 Scientists say it’s not too late

Despite the disastrous descriptions of our hotter Earth, the new report also makes clear that it is not too late to curb global warming. The more humans reduce emissions this decade, the more livable Earth will be for the rest of this century and for many centuries to come.

One of the big questions posed by world leaders is whether it’s still possible to meet the targets set by the 2015 Paris climate agreement. That agreement seeks to limit global warming to well under 2 degrees Celsius (3.6 degrees Fahrenheit), and ideally keep it below 1.5 degrees Celsius (2.7 degrees F). Earth is already about 1 degree Celsius hotter than it was in the late 1800s.

Most of the biggest economies in the world are not on track to meet those temperature targets because they continue to rely too heavily on fossil fuels for electricity, transportation and industry — including most polluting fuels such as coal. That includes the U.S., which has cut emissions very slowly in recent years.

The new report finds that it is still possible to meet the targets set under the Paris agreement, but it gets more difficult with every passing day. The authors used five theoretical scenarios to predict future global warming. The scenarios include different levels of greenhouse gas emissions, as well as economic and population growth and political collaboration. Under all five scenarios, Earth hits 1.5 degrees Celsius (2.7 degrees Fahrenheit) in the next two decades.

The authors found that if countries around the world dramatically and permanently cut emissions immediately, Earth will start getting cooler around the middle of this century. On the other hand, if countries move more slowly to curb emissions or fail to transition to cleaner sources of energy, Earth could warm by 4 degrees Celsius (7.2 degrees F) or more by the end of the century.

“I think a key message here is that it is still possible to forestall most of the most dire impacts, but it really requires unprecedented, transformational change,” says Barrett, the IPCC vice chair. “But the idea that there still is a pathway forward I think is a point that should give us some hope.” 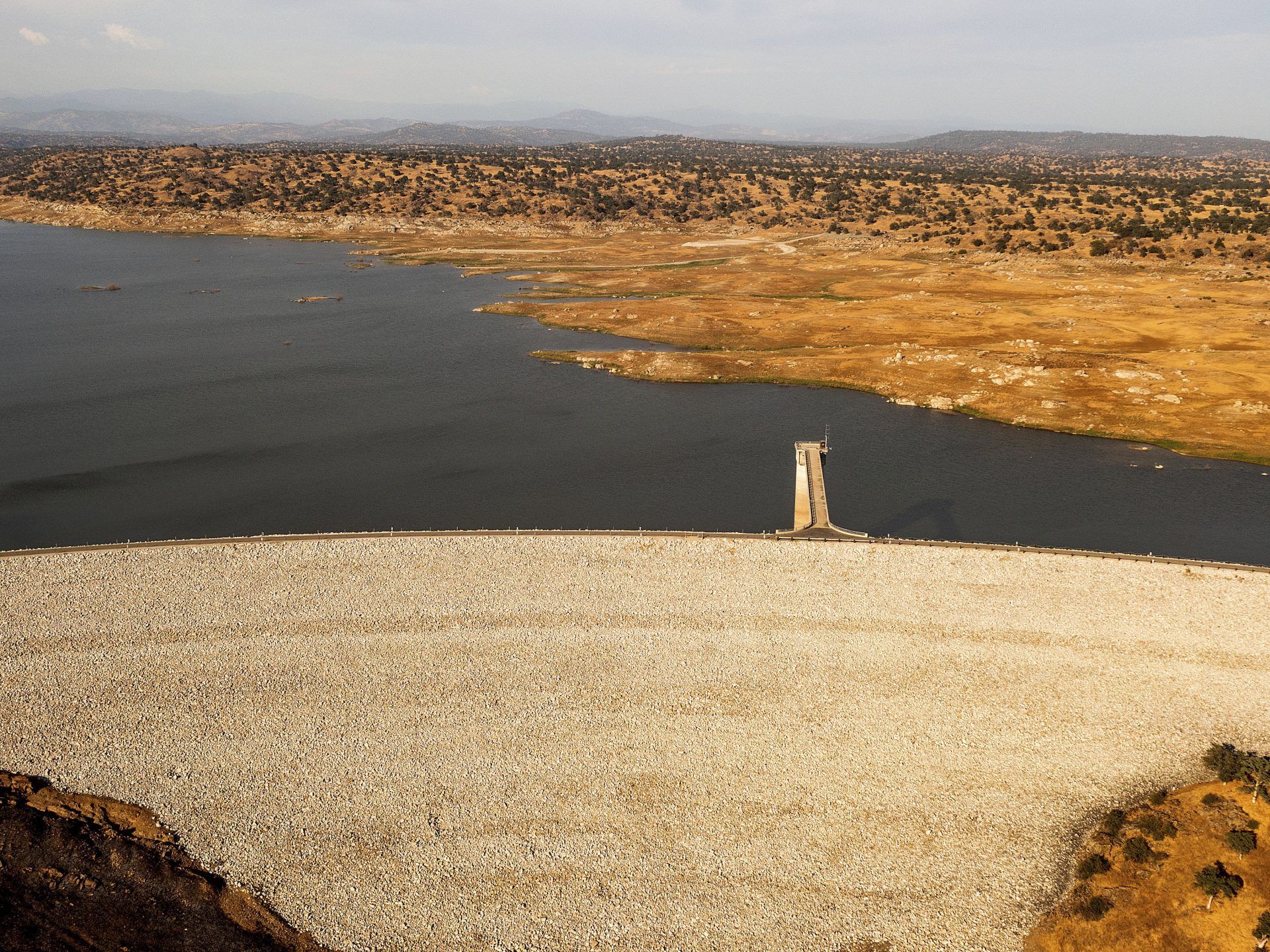 Buchanan Dam holds back water in Eastman Lake on Thursday, June 17, 2021, in unincorporated Madera County, Calif. At the time of this photo, the reservoir was at 11 percent of capacity and 20 percent of its historical average.

Climate change is global, but solutions are local

This is the sixth edition of the IPCC’s climate science report, and it is the first time scientists have broken down their findings and predictions by region. That’s a big deal because many countries rely on such reports to understand what the future will look like for their citizens and which policies make the most sense.

For example, the pace of sea level rise varies dramatically depending on where you live. Governments need regional information to decide where to build new infrastructure and how to protect existing coastal cities. The same is true for drought and flooding from rainstorms, which disrupt agriculture and drinking water supplies. Major cities including Cape Town, South Africa, and Chennai, India, have struggled to maintain reservoirs in recent years.

“It’s very important that this report gives regional information that is going to help us make decisions at the regional level,” says Paola Arias, one of the report authors and a climate scientist at the University of Antioquia in Colombia.

When it comes to adaptation, the U.S. relies less on the specific information in this report because the federal government regularly releases national climate assessments. However, the U.N. report does provide important global context for the Biden administration’s promise to cut U.S. greenhouse gas emissions in half this decade.

“The target that the Biden-Harris administration articulated earlier this year is the most ambitious ever in U.S. history,” says Jane Lubchenco, the deputy director for climate and environment at the White House Office of Science and Technology Policy. “This report is telling us we need to be ambitious. We probably need to be even more so.”

It’s unclear how the U.S. will achieve the goal it has already set, let alone an accelerated goal. The infrastructure package Congress is currently considering includes some investments in cleaner electricity, public transit and electric appliances and vehicles. Meanwhile, other major economies including China and India are not on track to reduce their emissions this decade.

Correction: Penn State’s Michael Mann was not an author for the current IPCC report. An earlier version of this story was incorrect.