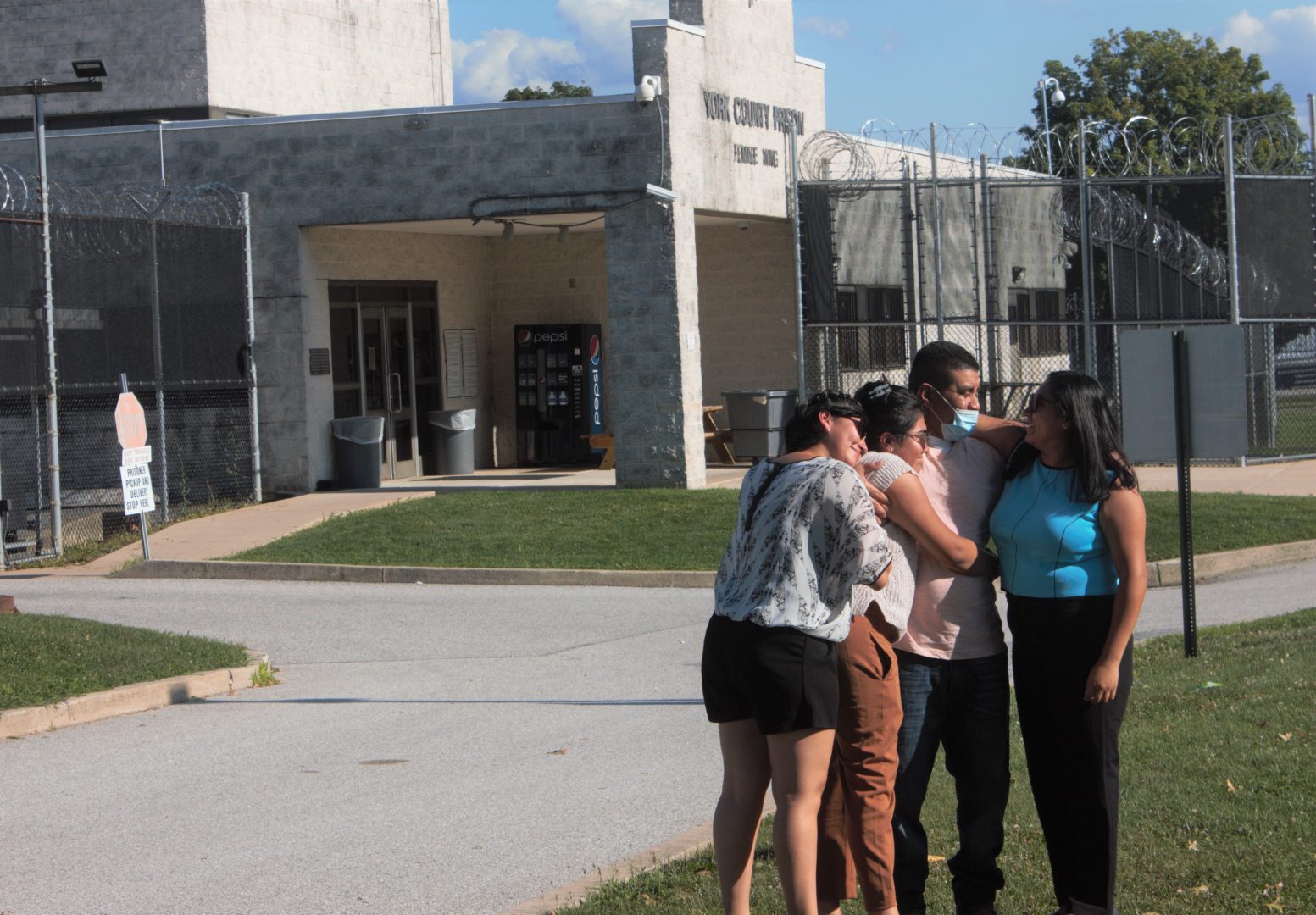 (York) — When Alfredo Carmona’s family found out on July 28 that he was getting tested for COVID-19 and his commissary account was shut off, they feared the worst.

Carmona, an Immigration and Customs Enforcement detainee at York County Prison, was on the transfer list. The agency, which is ending its contract with the prison, had been releasing some detainees but sending others to out-of-state prisons. Before detainees are transferred, they get a virus test and their account is closed.

His family knew Carmona was to be sent to a detention center in Miami.

But on July 30, the day he was scheduled to go, he found out he was staying.

After getting word Aug. 2 of his release on humanitarian parole, Alfredo’s wife, Myriam Carmona, and his daughters Destiny, Diamond and Dakota drove three hours from Delaware to York to pick him up.

They waited together by picnic tables set up in the parking lot area of the prison.

“We’ve been praying so much and hoping and dreaming with every chance and opportunity that he’s going to come out and now that it’s finally here, it just feels surreal, like it’s not even happening,” Diamond said.

A loud buzz rang from the prison and everyone gathered to see what was going to happen.

From afar, Myriam saw two detainees lined up next to the security gate.

“That’s him, that’s my husband!” she exclaimed.

She said she recognized Alfredo because he was wearing the same clothes from when he was arrested by ICE in April. Myriam and her daughters ran toward Alfredo and embraced. They hadn’t seen each other for 100 days.

It wasn’t easy to talk to them while he was in prison, he said. The connections during video calls would often drop, and sometimes, depending on which guard was in charge, he would not be granted permission to speak to his family. 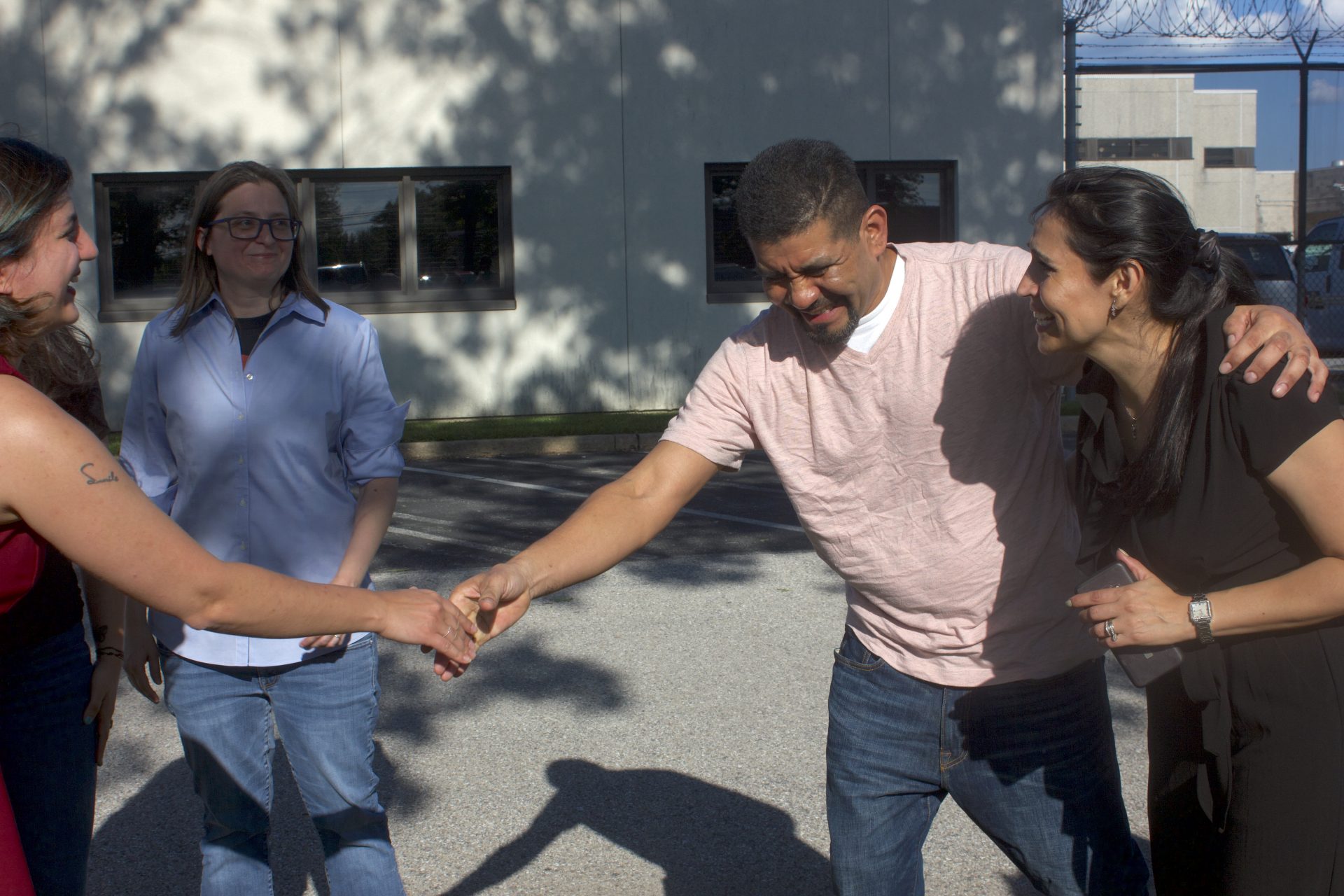 “I believe in family a lot and the experience of being separated from them made me feel I was losing my life,” Carmona said. “It was very difficult for me, my wife and my three daughters.”

That weekend, 29 detainees were transferred to out-of-state facilities, according to Adriana Zambrano, spokesperson for Aldea, an immigration services center. Aldea, a nonprofit that provides free legal services, helped Carmona apply and qualify for humanitarian parole.

Carmona, 49, came to the United States from Mexico and has lived here for 35 years. He owns a small construction company in Delaware that he started in 2003. His wife and daughters are U.S. citizens.

He was under a prior deportation order, and was detained by ICE April 14 on his way to work.

As part of his parole conditions, Carmona is required to maintain good behavior, wear an ankle monitor and show up if he receives a final order of deportation.

“The majority of people that are detained at York, even those that have negative immigration or criminal history, deserve the shot at a case by case analysis of whether they should be released from custody, because there’s a substantial number of them that are not priorities for detention and have active cases,” said Bridget Cambria, Carmona’s attorney and executive director of Aldea-The People’s Justice Center.

Cambria said Alfredo qualifies for being released under ICE’s prosecutorial discretion guidance issued on May 27. The guidance is based on the Biden administration’s enforcement and detention priorities issued in January.

According to the memo, immigration prosecutors should “consider relevant aggravating and mitigating factors,” such as the amount of time someone has resided in the country, family or community ties, and work history in the United States. If the detainee has a criminal record, prosecutors should take into account the seriousness and how recent the crime was, as well as any rehabilitation efforts.

As of Aug. 6, there were close to 60 detainees still at York County Prison, according to Aldea and other immigration legal services centers. That number is in constant flux, since detainees are being transferred or released every day, according to attorneys and immigration advocacy groups. The prison will no longer house immigration detainees as of Aug. 12.

ICE declined to provide a specific number of transferees from the prison and did not respond when asked how many detainees have been released on parole.

Cambria said there are some positives about the prison closing. For example, there will be about 900 fewer beds to detain immigrants in Pennsylvania. Still, she worries about those who are facing transfer.

“Looking forward, it’s good that we’ll have less detention in Pennsylvania, but the folks who remain I’m particularly concerned for, not only their legal situation, but their physical and mental health,” Cambria said. “We’ve had a substantial number of people moved to different locations and Florida and Georgia and Massachusetts, they have not done well.”