The male wing of York County Prison is seen in this Google Streetview capture taken October 2016.

The male wing of York County Prison is seen in this Google Streetview capture taken October 2016.

Advocacy groups claim that federal immigration agents and York County Prison staff are retaliating against a group of detainees who recently held a hunger strike.

Juntos and MILPA, immigrant advocacy groups that work directly with detainees, allege ICE and prison staff pressured detainees to end the recent and brief strike and have taken away detainees’ access to phones, TVs and showers.

County and federal officials denied those claims. Spokesmen for York and U.S. Immigration and Customs Enforcement say they take the wellbeing of detainees seriously.

ICE officials said that while some detainees at the prison refused meals for a short period of time, none met criteria for the agency’s official definition of a hunger strike. Agency guidance determines a hunger strike after a detainees has not eaten for 72 hours.

Desi Burnette, the state coordinator for MILPA, said the hunger strike was largely squashed through intimidation before the 72-hour mark.

Juntos Director Erika Guadalupe Núñez says 35 detainees went without eating to call for their release from detention as opposed to being transferred to another facility as the ICE detention center in the prison prepares to close operations by mid-August.

The detainees “are not only highlighting the injustice that is prolonged detention and indiscriminate enforcement,” Núñez said in a written statement. “We uplift the demands of those detained and demand ICE shift to immediate releases, not transfers.”

ICE said it determines who it keeps in custody on a case by case basis and rebuffed accusations that it has mistreated or intimidated detainees.

“ICE is committed to ensuring that those in our custody reside in safe, secure, and humane environments and under appropriate conditions of confinement,” ICE officials said. “Allegations regarding substandard conditions at the York County Prison are not accurate.”

Five detainees who organized the strike have been placed in solitary confinement, Núñez said.

Earlier this month, York County did not renew its contract with ICE to detain immigrants in the prison, and no ICE detainees will be held there by August 12.

When the end of the contract was announced, immigrant advocacy groups such as CASA said it was a victory, attributing it to their consistent campaign to close the center.

York President Commissioner Julie Wheeler said the decision was based on whether the contact made fiscal sense for the county.

In their joint statement, Juntos and MILPA also leveled their accusations against prison staff. 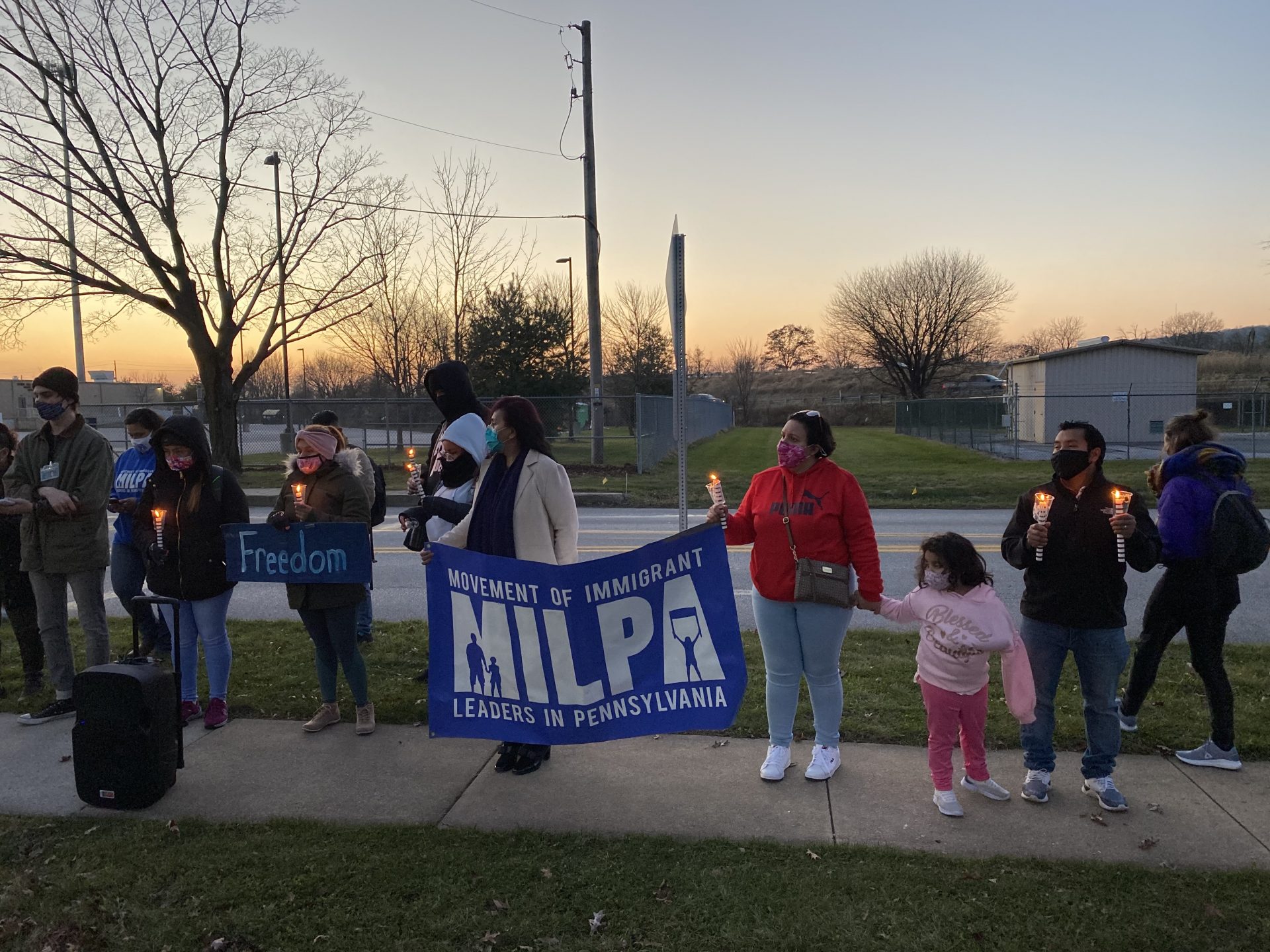 Demonstrators with the Movement of Immigrant Leaders in Pennsylvania gather outside York County Prison on Dec. 10, 2020.

“York County Prison will not mistreat or threaten detainees due to hunger strikes,” Walters said in a written statement. “We will, however, urge detainees to eat and monitor their health.”

Walters also said the county has received a number of emails in support of the hunger strike as a means to urge ICE to release detainees.

As of July 30, there are about 98 detainees there, said Lilah Thompson, a staff attorney for Nationalities Service Center who is working on detainee cases.

Thompson said transfers can devastate a person’s case and make it harder for attorneys and their clients to communicate. York Immigration Court is closing on July 30 and will stop hearing cases from detainees in custody. Detainees who are transferred will have to transfer their cases to a new court system.

A DOJ spokesperson said that pending cases will be moved to Baltimore Immigration Court.

Cynthia Rosario, the niece of one of the detainees in York County Prison, hoped her uncle would get released on parole. He is a cancer survivor who contracted COVID-19 last December in ICE custody when there was a prison outbreak, but his family has been trying to get him out since the beginning of the pandemic due to his health conditions. Now, he is at risk of getting transferred.

“The family got their hopes up, while we were all working really hard to get everything needed for the appeal,” Rosario said. ”And then, you know, it was denied.”