Registered nurse Chrissie Burkhiser puts on personal protective equipment as she prepares to treat a COVID-19 patient in the in the emergency room at Scotland County Hospital Tuesday, Nov. 24, 2020, in Memphis, Mo. The tiny hospital in rural northeast Missouri is seeing an alarming increase in coronavirus cases. 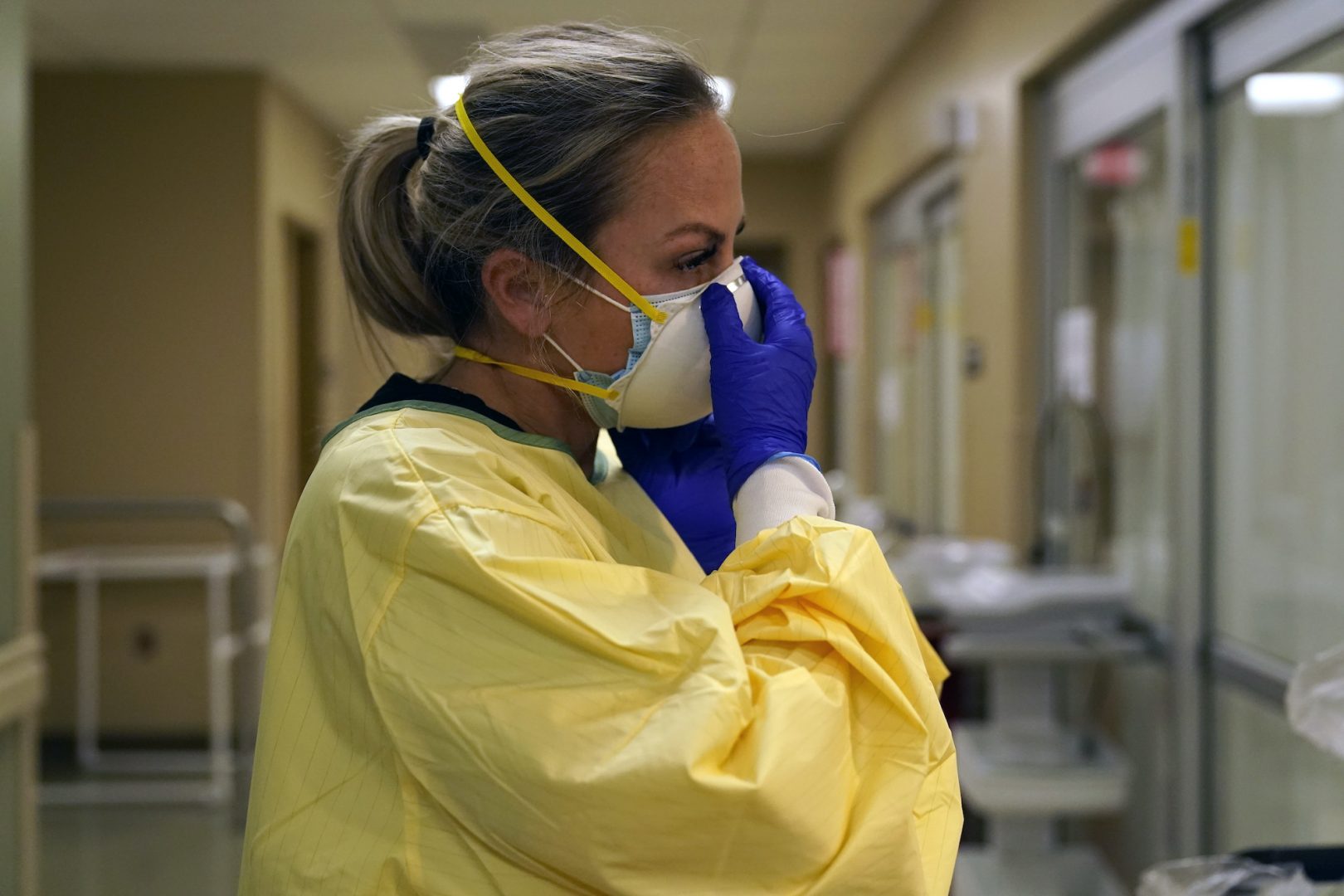 Registered nurse Chrissie Burkhiser puts on personal protective equipment as she prepares to treat a COVID-19 patient in the in the emergency room at Scotland County Hospital Tuesday, Nov. 24, 2020, in Memphis, Mo. The tiny hospital in rural northeast Missouri is seeing an alarming increase in coronavirus cases.

This is one of a series of articles in which reporters from WHYY’s Health Desk Help Desk answer questions about vaccines and COVID-19 submitted by audience members.

The way doctors treat people with COVID-19 has evolved over the course of the pandemic as scientists come to better understand the virus and more studies are published. WHYY asked health care systems in Pennsylvania, New Jersey, and Delaware about current treatments. Here’s what you need to know.

How has triage evolved?

At the start of the pandemic, health systems’ primary focus was on hospitalized patients with severe symptoms, who might need critical care support and mechanical ventilation to breathe. At that time, there were few available resources to care for non-hospitalized patients. There have since been advances not only in the types of monitoring and support physicians can provide in an outpatient setting, but also in the availability of some new therapies.

One change has to do with the speed of testing. At first, health systems relied on state health departments to test residents, and there were significant delays in receiving results. Now, health systems have rapid onsite testing, which allows them to triage patients faster. 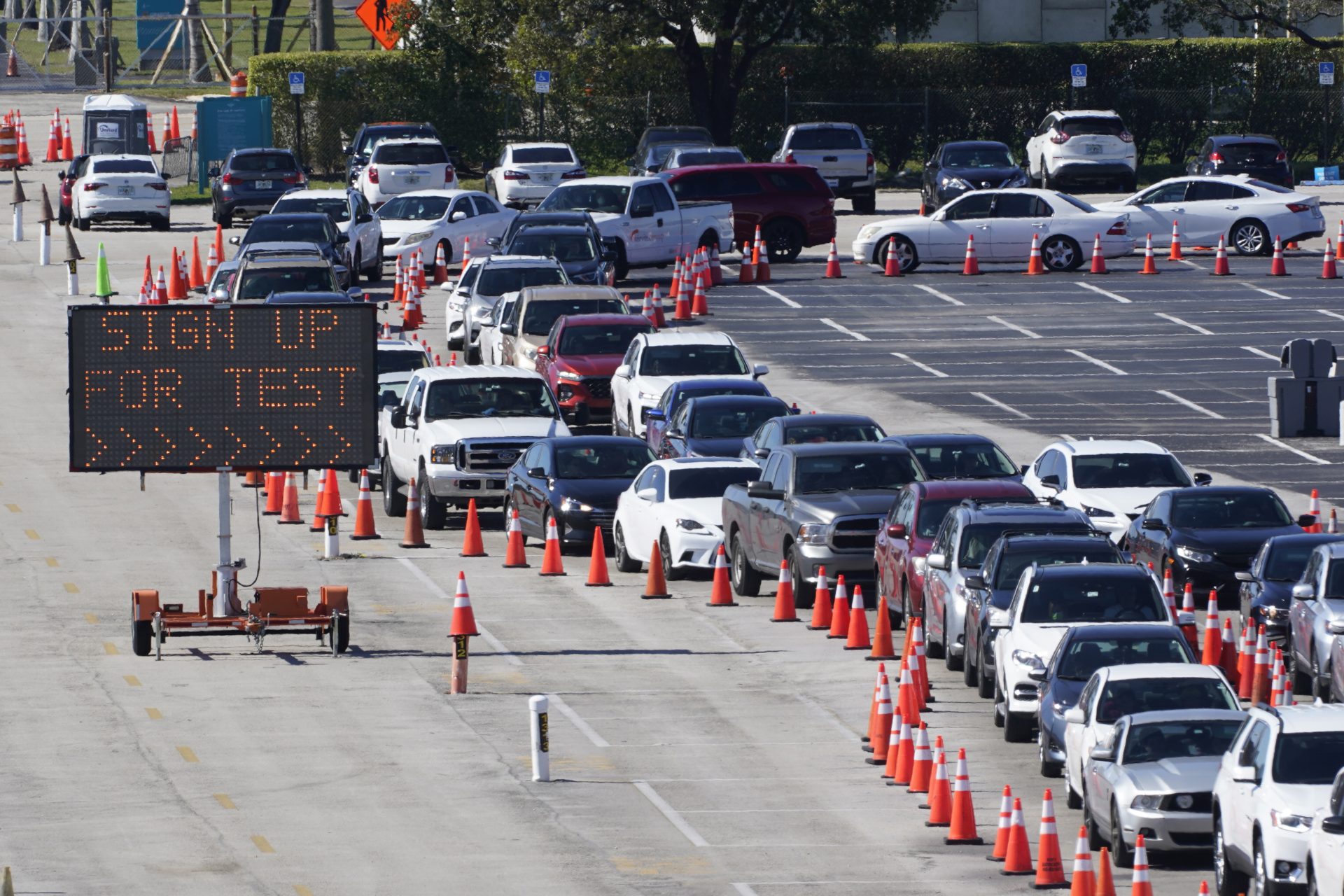 In this Jan. 5, 2021, file photo, cars line up for COVID-19 testing outside Hard Rock Stadium in Miami Gardens, Fla.

How are non-hospitalized patients treated?

Patients who don’t require hospitalization and are early on in their disease progression can receive monoclonal antibodies, which are infused via intravenous. The treatment has been shown to reduce the likelihood of disease advancement and the need for hospitalization. Supply of the treatment has increased significantly, physicians say.

Generally, doctors recommend this treatment for patients who have a chronic condition, like heart disease, diabetes, or cancer, because they’re at greater risk for developing serious illness with COVID-19.

Physicians say it’s unclear if the treatment is as helpful for a patient who has the delta variant of the virus.

Temple Health enrolled some patients in a trial researching treatments like inhaled remdesivir (an antiviral agent) for outpatient therapy, as well as monoclonal antibodies. Patients in those trials had recent onset of symptoms of early disease, but were not sick enough to be hospitalized. Other patients were exposed, but not yet showing any symptoms.

Patients who present more serious symptoms get blood tested for inflammation and assessed for clotting. If they have peripheral symptoms (weakness, numbness, or pain), they will also get a CAT scan.

Today, the number of urgent cases is much fewer than it was at the beginning of the pandemic, physicians say.

“I think today we have a total of seven patients that are admitted with COVID-positive status, of which one of them is ill. At our height, we had like 225 to 235 hospitalized patients here at Temple,” said Dr. Gerard Criner, chair and professor of thoracic medicine and surgery at the Lewis Katz School of Medicine at Temple University and director of the Temple Lung Center.

How are hospitalized patients treated?

Patients who are hospitalized with mild to moderate symptoms of COVID-19 often receive steroids, which reduce some of the inflammation caused by the virus. Physicians say it decreases a patient’s chances of dying or experiencing more serious symptoms.

Patients might also receive remdesivir, which became available under an emergency use authorization about a year ago. The treatment aims to reduce the replication of the virus. It has a low side effect profile and has been shown to reduce recovery time. However, studies have shown mixed benefits, and it’s not clear if the treatment reduces a patient’s chances of requiring a ventilator. Since it’s relatively safe, physicians administer it fairly readily to hospitalized patients.

Patients experiencing more severe disease, such as inflammation in their lungs, and who require high amounts of oxygen or ventilator support, often receive anti-inflammatory treatment.

“There are a number of receptors and pathways within our body that the virus can trigger and cause an immune response, which then causes a global inflammation or inflammatory response,” said Dr. Vinay Maheshwari, Hugh R. Sharp Jr. Chair of Medicine and physician executive of The Medical Group at ChristianaCare.

Other mainstays of therapy include oxygen support, like high-flow nasal therapy. 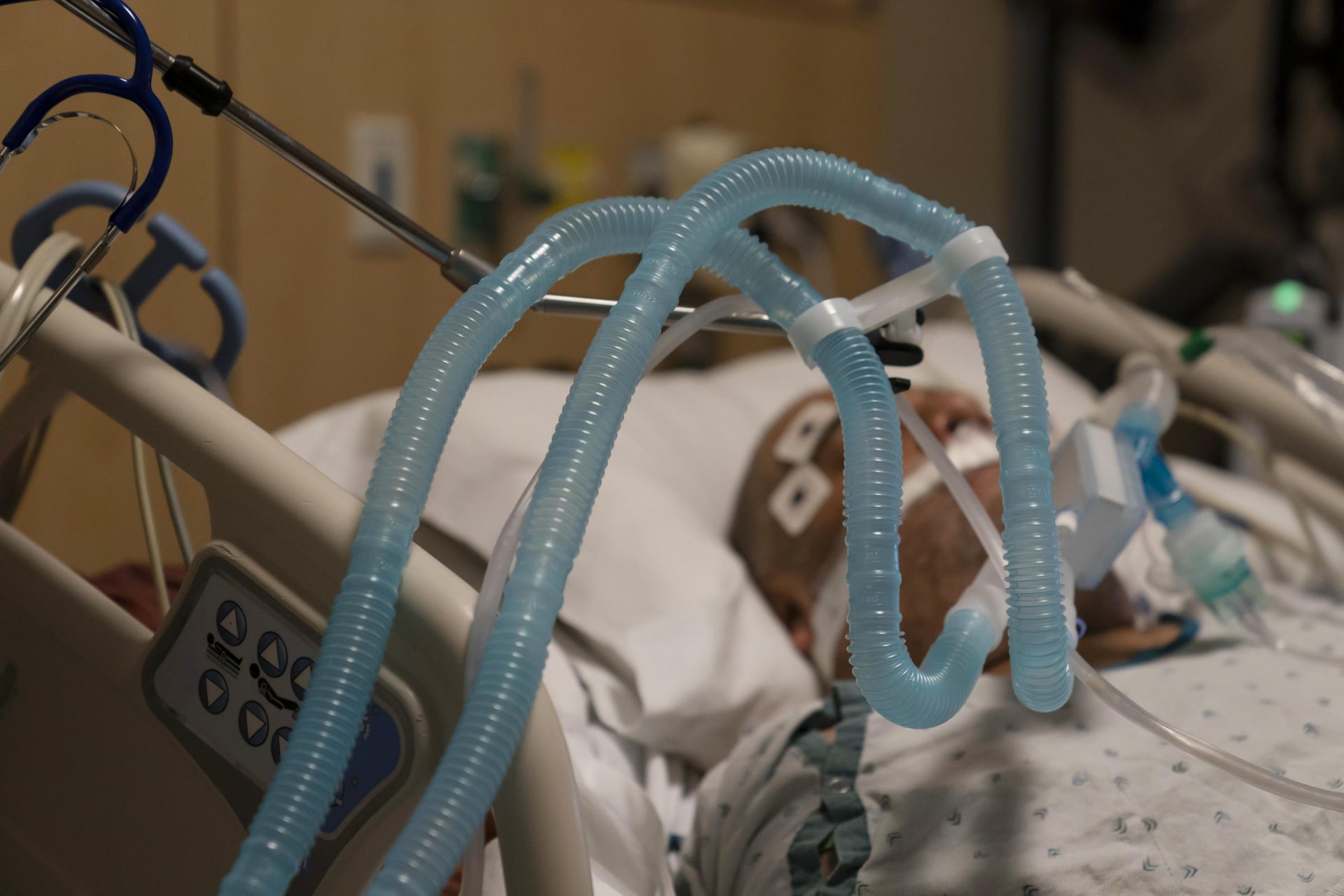 FILE PHOTO: In this Nov. 19, 2020, file photo, ventilator tubes are attached to a COVID-19 patient at Providence Holy Cross Medical Center in the Mission Hills section of Los Angeles.

How has COVID-19 treatment evolved?

There’s been a dramatic change in treatment protocols over the last several months, informed by clinical adaptive trials to examine which therapies work and which ones don’t.

Early on, the antimalarial medication called hydroxychloroquine was touted to treat COVID-19. However, research eventually showed that it was not beneficial and posed some risk. Physicians then removed it from the treatment paradigm.

Puri said while current treatment for patients with mild to moderate symptoms is somewhat limited, the evolution of treatment is important to note because “there have been many other things proposed over a period of time, including vitamin D, including hydroxychloroquine … so significant change.”

Steroids, which are now widely used, also were not originally recommended.

“That was a hot debate in the beginning of the pandemic, where it was mainly used in Southeast Asia, and was by expert opinion, kind of, stated not to be used,” Criner said. “Even the CDC originally recommended that, but that’s the mainstay of therapy now.”

During the beginning of the pandemic, convalescent plasma was a commonly used treatment for COVID-19 patients, but today, physicians aren’t using it as frequently because it’s not clear if it significantly reduces disease progression and mortality among hospitalized patients. Physicians sometimes prescribe it, though, for patients who are severely immunosuppressed, or for those who can’t be treated with remdesivir because of kidney problems.

Studies are underway, however, to determine if convalescent plasma is beneficial for outpatient treatment.

“I think it will be part of the ongoing learning journey with COVID about whether that will really provide benefits for those patients in the outpatient realm,” Maheshwari said. “In the meantime, I think that it’s a great opportunity for those who are willing to donate to continue to do so. It will provide us more access to that therapy, as well as the opportunity to continue to investigate it.”

The physicians say they’re also examining how long which medications can be prescribed in a way that can maximize their benefits, but also limit the likelihood of side effects.

“The promise of stem cells to help regenerate the lungs after the lungs have been destroyed by the COVID virus is fascinating,” Puri said.

Has the evolution of treatment improved patient outcomes?

“One hundred percent,” Puri said. “But here’s a nuance to that.”

“In the first wave, because you did not know steroids worked, there are possibly people who could have been saved who were not saved,” he said. “Overall, the prognosis improved. But if you made it to the intensive care unit, and you were on a ventilator, people in the second wave did worse among the most critically ill.”

Puri added that oxygen therapy helped many patients in the first and second surges.

“The outcomes for these patients were really quite dismal. And over time, even though we know there is going to be a layer of patients who will get severely ill, critically ill, we have confidence and optimism about our ability to treat them,” he said.

The rollout of the COVID-19 vaccine also has reduced serious illness and death.

“We’ve gone from multiple intensive care units filled with people of all age groups, young to old — we helped many people, but many people still passed away — to now, COVID is a negligible part of our hospitalized population,” Puri said. “The vaccine is a game-changer. I’ve never felt so proud of medical advancement in my lifetime.” 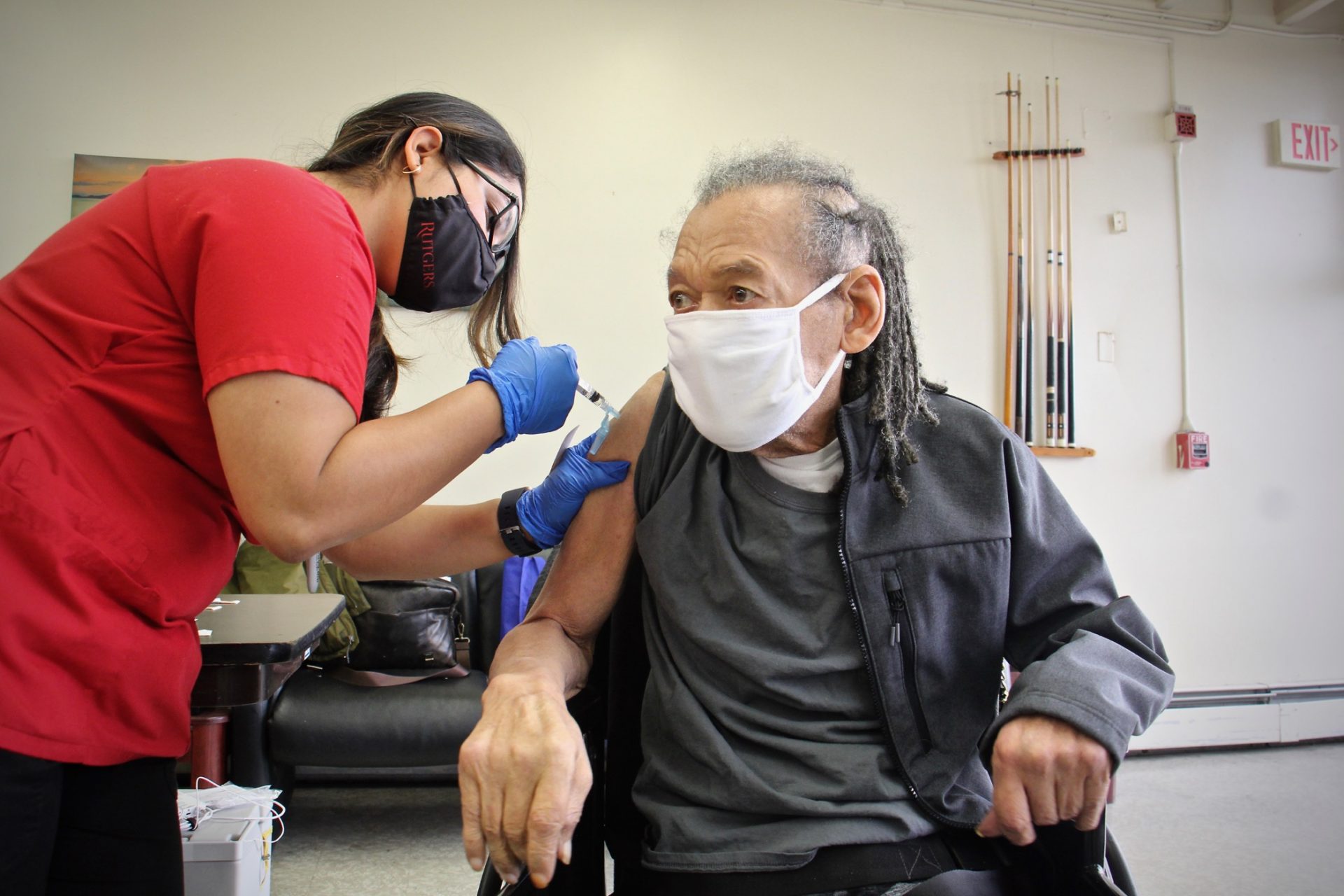 Ekay Brown, 76, of Camden, gets his COVID-19 vaccination from Leslie Demark, a student at Rutgers School of Nursing, during a clinic at Westfield Towers senior high-rise.

What are some of the possible side effects of treatment?

“We have to be very careful in thinking about that, being very diligent in terms of preventing other types of infections that might occur to them, and being very thoughtful in our patient selection as it relates to any side effects that they might have to encounter,” Maheshwari said.

Doctors also have prevented infection in patients by avoiding the use of mechanical ventilation with a tracheal tube, and instead using non-invasive treatments like high-flow nasal therapy.

Could the delta variant, or future variants, be a setback?

The physicians said while they are prepared to handle another surge in COVID-19 cases — which they hope will not occur — they are very concerned about the delta variant and future mutations of the virus. Last week, the CDC announced that the delta variant accounts for 83% of new cases in the U.S. COVID fatalities also rose by almost 48% over the past week to an average of 239 a day.

“We know that the delta variants can be prevented in terms of disease progression and severity progression with the vaccine,” Maheshwari. “And that’s our biggest opportunity, is to increase and improve our vaccination rates. Particularly, getting both doses of the vaccine is going to be extremely helpful and will be our biggest deterrent against an increase or rise or surge in overall cases and hospitalizations.”

Though health experts say the vaccine is the best way to tackle the delta variant, studies of overall vaccine effectiveness against the variant have been mixed.

“As the virus rages around the world, it obviously can mutate and create problems for us … And I’m worried about the fall, like October, November. I think that will be very telling at that time if we have another surge,” Puri said.

Physicians also are concerned about the flu season this coming winter. Last year, flu cases were low, which health experts associated with mask-wearing and physical distancing. If there is less mask-wearing and physical distancing, and if people don’t get their flu shots because of what he calls “vaccine discussion fatigue,” Criner said, “the influenza season this year could be much greater than it’s been in the last two years.”

The delta variant will drive a steep rise in U.S. COVID deaths, a new model shows