10 things to watch for when the Tokyo Olympics begin

The start of the largest event in sports after a year postponement is a sign of hope for many. But critics view holding the Games during pandemic times as an unacceptable risk to the world’s top athletes and the Japanese people.

For months, questions have persisted about whether these Olympics, which are deeply unpopular in Japan, will actually happen.

Now we know the answer is (almost surely) yes. We’re just a few hours away from the first event.

Despite the criticism and the extreme logistical challenges of putting on the Games, thousands of athletes, journalists and officials have streamed into Japan.

The strict safety protocols haven’t been able to stop positive coronavirus cases from surfacing in the Olympic bubble, as Japanese officials try to keep them contained and away from a largely unvaccinated population. In Tokyo, after much back and forth, organizers decided to hold the events without any spectators in the stands.

Against great odds, the world’s top athletes are about to take the spotlight. Here are some key things to know about the first half of the Games.

1. Soccer and softball will start competition before the Opening Ceremony

Good news for anyone who simply can’t wait for the Games to start – you’ll be able to catch U.S. women play their first games of soccer and softball two days before the Opening Ceremony. The U.S. women’s soccer team will square off against Sweden. The game will start before the sun rises on the East Coast, at 4:30 a.m. Wednesday. 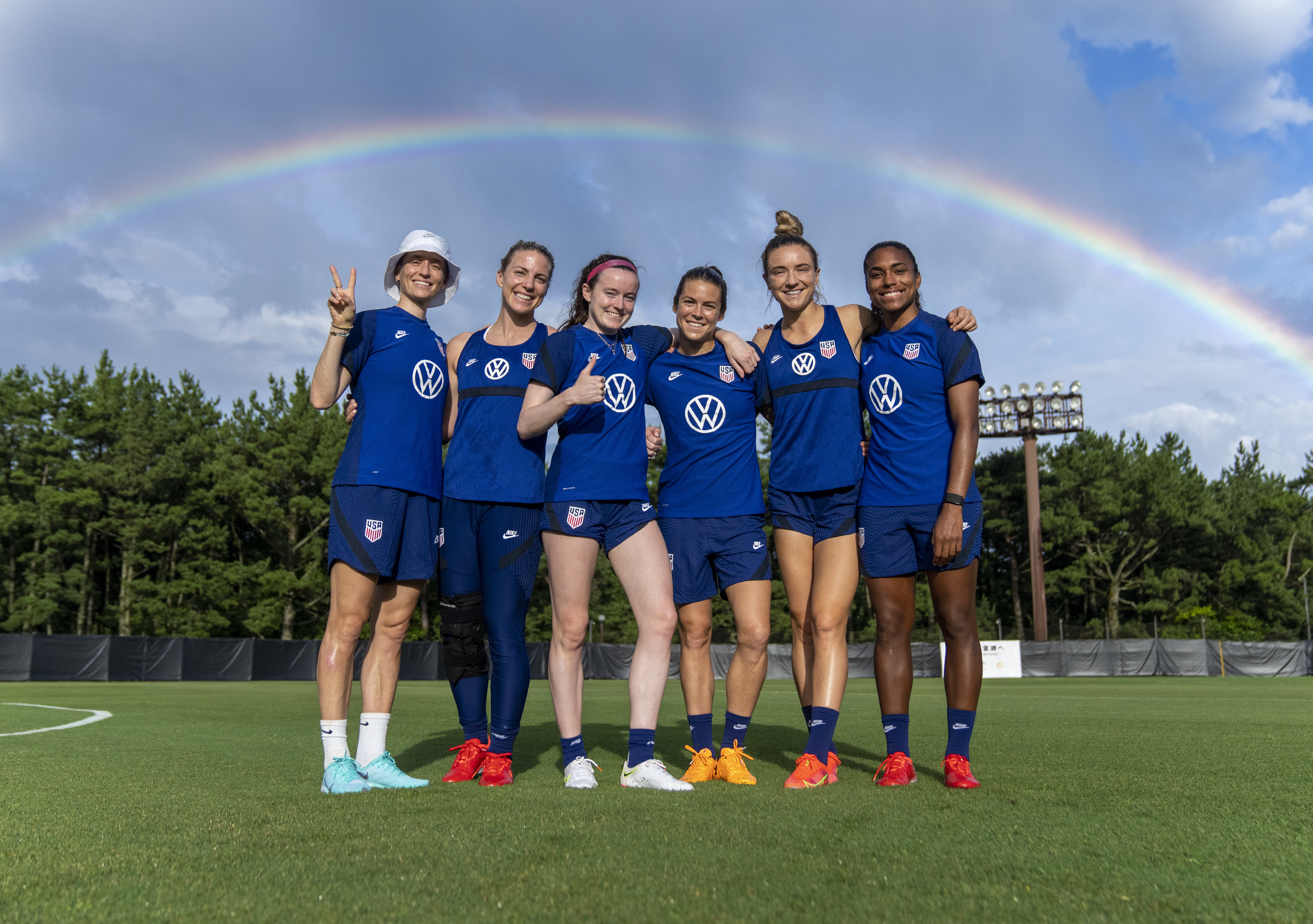 Members of the U.S. women’s soccer team pose for a photo during a training session earlier this month in Miyazaki, Japan. (Brad Smith/ISI Photos/Getty Images)

The U.S. women’s team is trying to become the first ever reigning women’s World Cup champion to win Olympic gold.

U.S. women’s softball players will face Italy in a matchup starting at 11:00 p.m. ET on Tuesday. Softball is making its return to the Olympics for the first time since 2008, when Japan took gold. Since then, U.S. has won the most world titles, followed by Japan. Baseball is also marking its return to the Games.

2. The Opening Ceremony itself will look a lot different than past years

The three-hour ceremony marking the official start of the Games will begin at 7 a.m. ET on Friday. Organizers have released very little practical information about what we’ll see at the ceremony, which is themed “United by Emotion” and directed by Japanese comedian Kentaro Kobayashi.

But we do know that like the Games in general in Tokyo, there will not be spectators watching in person, though some officials, VIPs and members of the press will be in the stands. A major feature of the Opening Ceremony is the “Parade of Nations,” when groups of athletes from each country walk into the arena. Fewer athletes are expected to attend the ceremony this time because many are not allowed to stay for the entire Games due to coronavirus restrictions.

3. The first medals will be awarded Saturday, and the winners will put the prizes on themselves 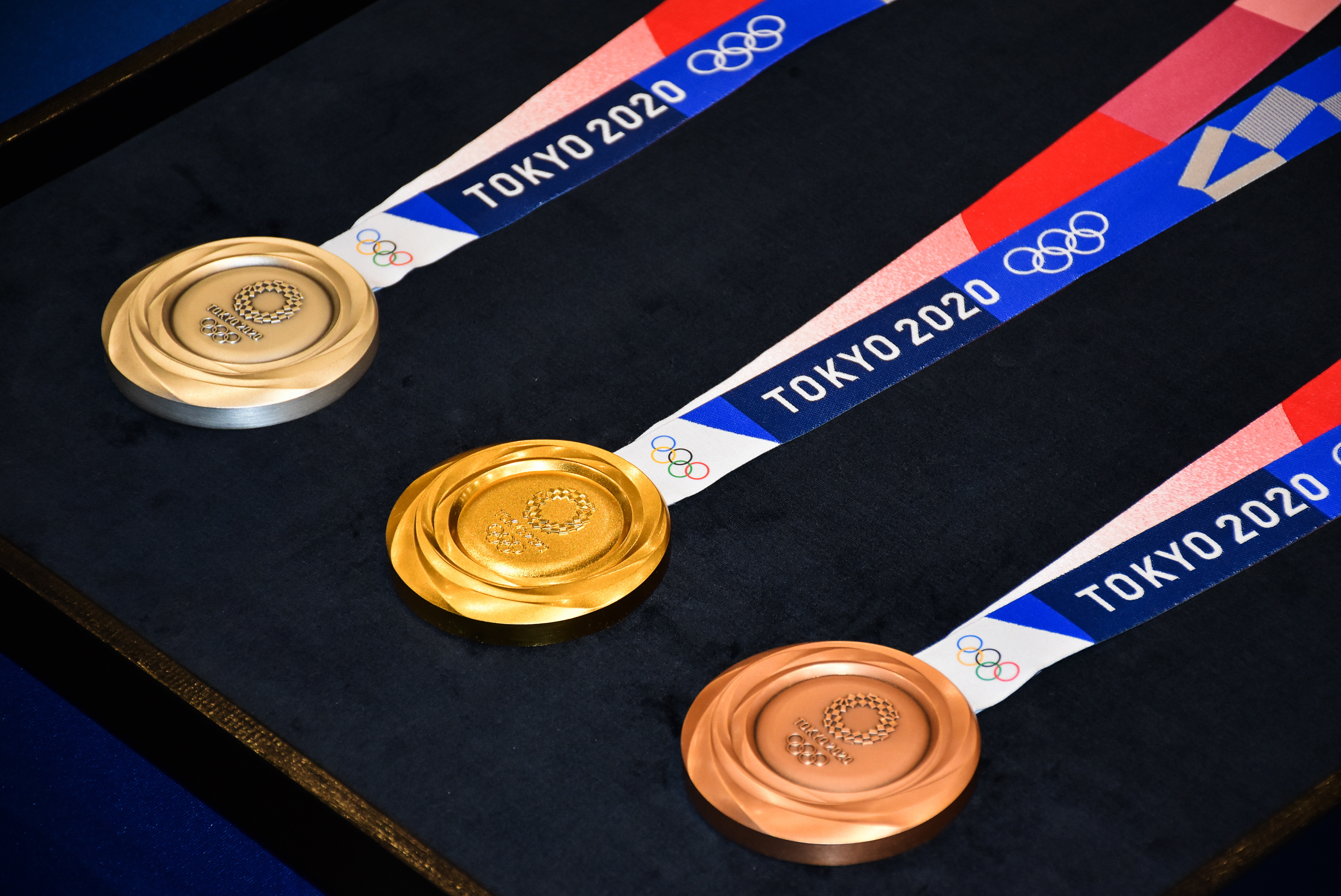 The first medals of the Games are expected to be handed out to the winners of the women’s 10m air rifle final – and 11 total sets of medals will be up for grabs on that day.

In previous Olympics, dignitaries placed the medals around the athletes’ necks as they stood on the podium and leaned forward during the medal ceremony. But Olympic officials have announced that due to coronavirus concerns, athletes will be presented with a medal on a tray and then will put them around their own necks.

The medals are actually made of recycled materials. The Japanese organizers say they asked citizens to contribute small electronics devices and used metal extracted from them to create about 5,000 medals. 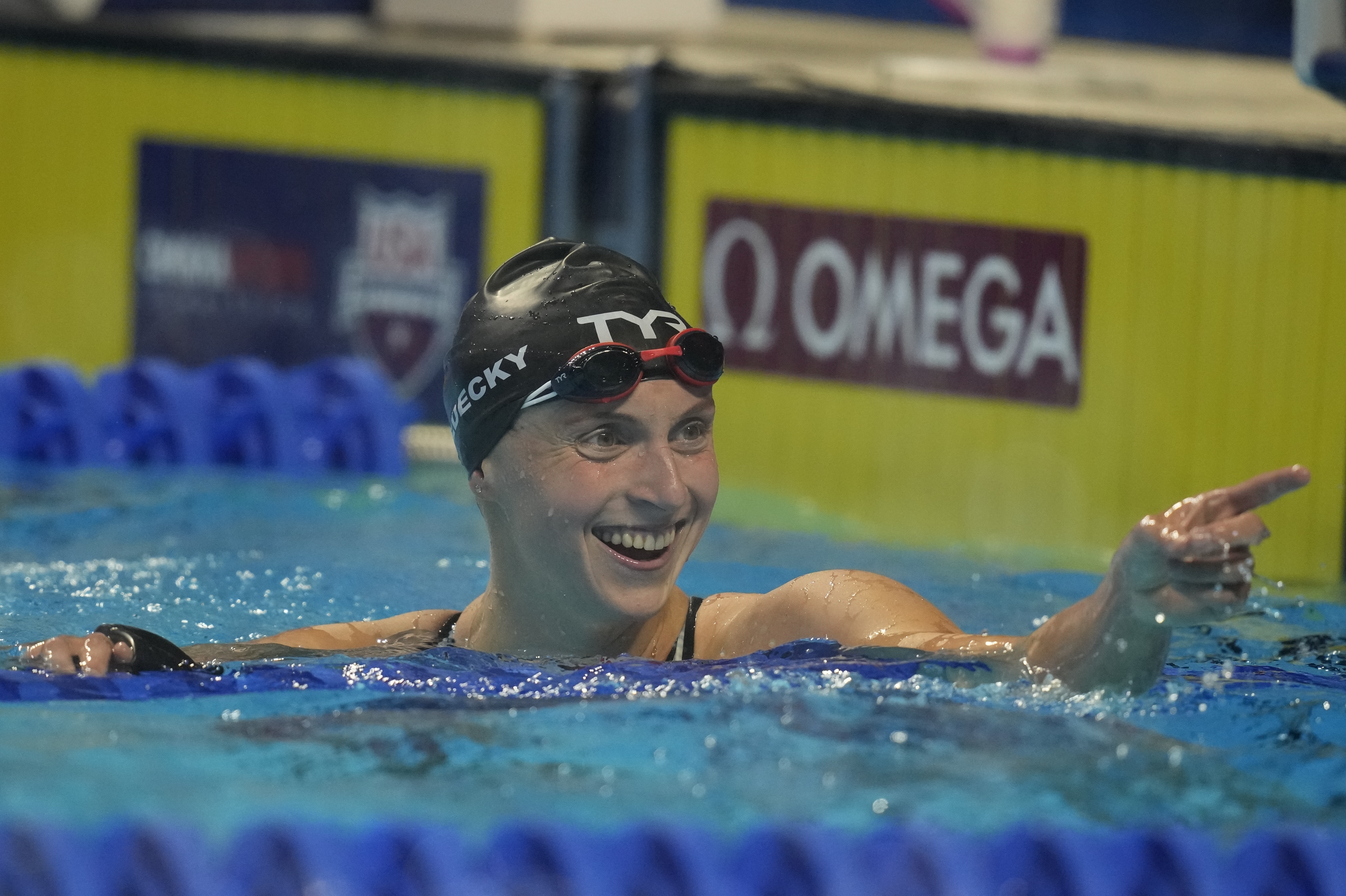 Other swimmers to watch include Simone Manuel, who narrowly won the 50 meter freestyle event at Olympic Trials. The team’s youngest swimmer, 15-year-old Katie Grimes, will compete in the 800 meter freestyle event. Swimming events span from Saturday July 24 through the evening of July 31 ET. 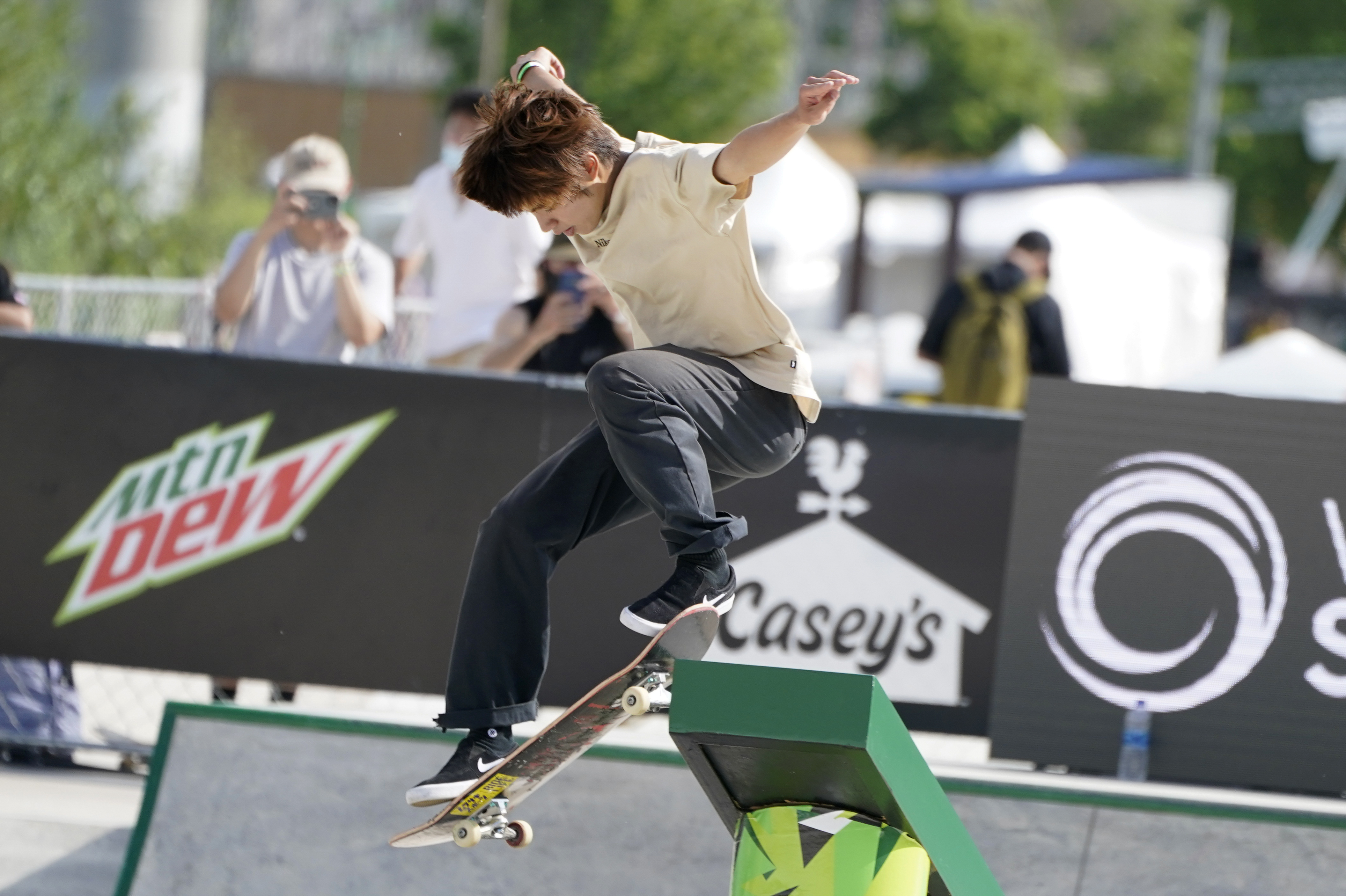 Japan’s Yuto Horigome, shown here during a skateboarding competition in May, is a medal contender in the sport’s Olympic debut. (Charlie Neibergall/AP Photo)

Two board sports with rebellious, counter-culture vibes will be part of the Olympics for the first time. It’s seen as an effort to attract younger viewers to the largest competition in sports. For surfing, nature — and an expert wave forecaster — will decide when the competition begins. If the waves cooperate in Chiba’s Tsurigasaki Beach, about 40 miles from Tokyo, we could see the finals in this competition in the evening on July 27 ET.

Countries with longtime surfing histories such as the U.S., Australia and Brazil are expected to do well in the sport’s debut.

Skateboarders will compete in two categories: street and park. The street skaters will show their skills on July 24 and 25 ET on stairs, handrails, curbs, benches, walls and banks. For the park competition on August 3 and 4 ET, athletes will demonstrate their mid-air tricks and spins and skills in a course that resembles a bowl.

The U.S.’s Nyjah Huston is a medal hopeful in the men’s street competition, and Japan has strong contenders in the event, including Yuto Horigome. 13-year old U.K. skater Sky Brown, one of the youngest competitors at the Olympics, is a medal contender in the women’s park event.

Simone Biles, the best gymnast in the world, is essentially competing against herself at this point. She recently debuted a move that is so difficult, no other female gymnast has ever performed it in competition. Biles is hoping to replicate her success at the 2016 Olympics and win her second all-around title, and the final for that event starts at 6:50 a.m. ET on July 29. The U.S. women’s team final is two days earlier, on July 27.

A big question is who will take silver in the women’s all-around competition. Biles’ teammate Sunisa Lee is a medal contender, as is Viktoria Listunova from Russia and Mai Murakami from Japan.

7. One race will determine the fastest woman alive 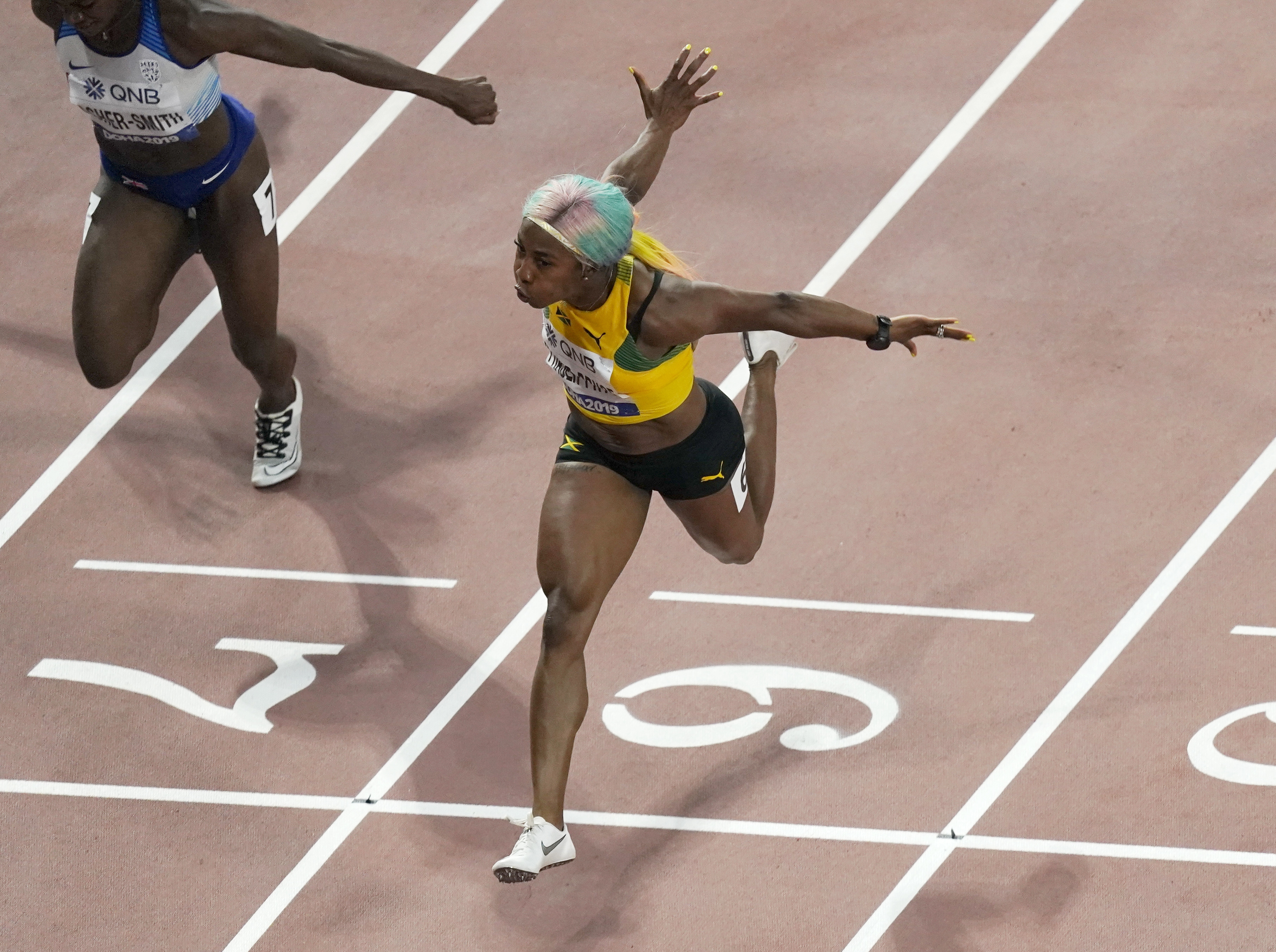 Jamaica’s Shelly-Ann Fraser-Pryce, running at the World Athletics Championships in 2019, is going for her third Olympic gold in the 100 meter race. (Nick Didlick/AP Photo)

The most highly anticipated women’s sprint event, the 100 meter final, is set to blaze down the track in Tokyo on Saturday, July 31 at 8:50 a.m. ET. Jamaica’s Shelley-Ann Fraser-Pryce, who has won the event in two previous Olympics, is trying to become the first woman to win three gold medals at this distance.

The runner viewed as the best hope for the U.S. to medal in the event won’t be on the starting line. Sha’Carri Richardson, who won the 100 meter race at the U.S. Olympic Trials, was later disqualified after testing positive for the psychoactive component of marijuana.

8. The U.S. women’s basketball team aims for its seventh gold medal in a row

The U.S. women’s basketball team is overwhelmingly dominant — it has won gold in every Summer Olympics since 1996, an astounding six times in a row. They haven’t lost a game at the Olympics since 1992 — and that loss was the only one since 1984.

The members of the team collectively have a lot of Olympic experience. Two team members — Sue Bird, 40, and Diana Taurasi, 39 — are gearing up for their fifth Olympics.

The U.S. women will play their first game at 12:40 a.m. ET on Tuesday, July 27. And if all goes well, they’ll compete for yet another gold medal on the evening of Sunday Aug. 7 ET.

9. Athletes are expected to protest — possibly even at medal ceremonies 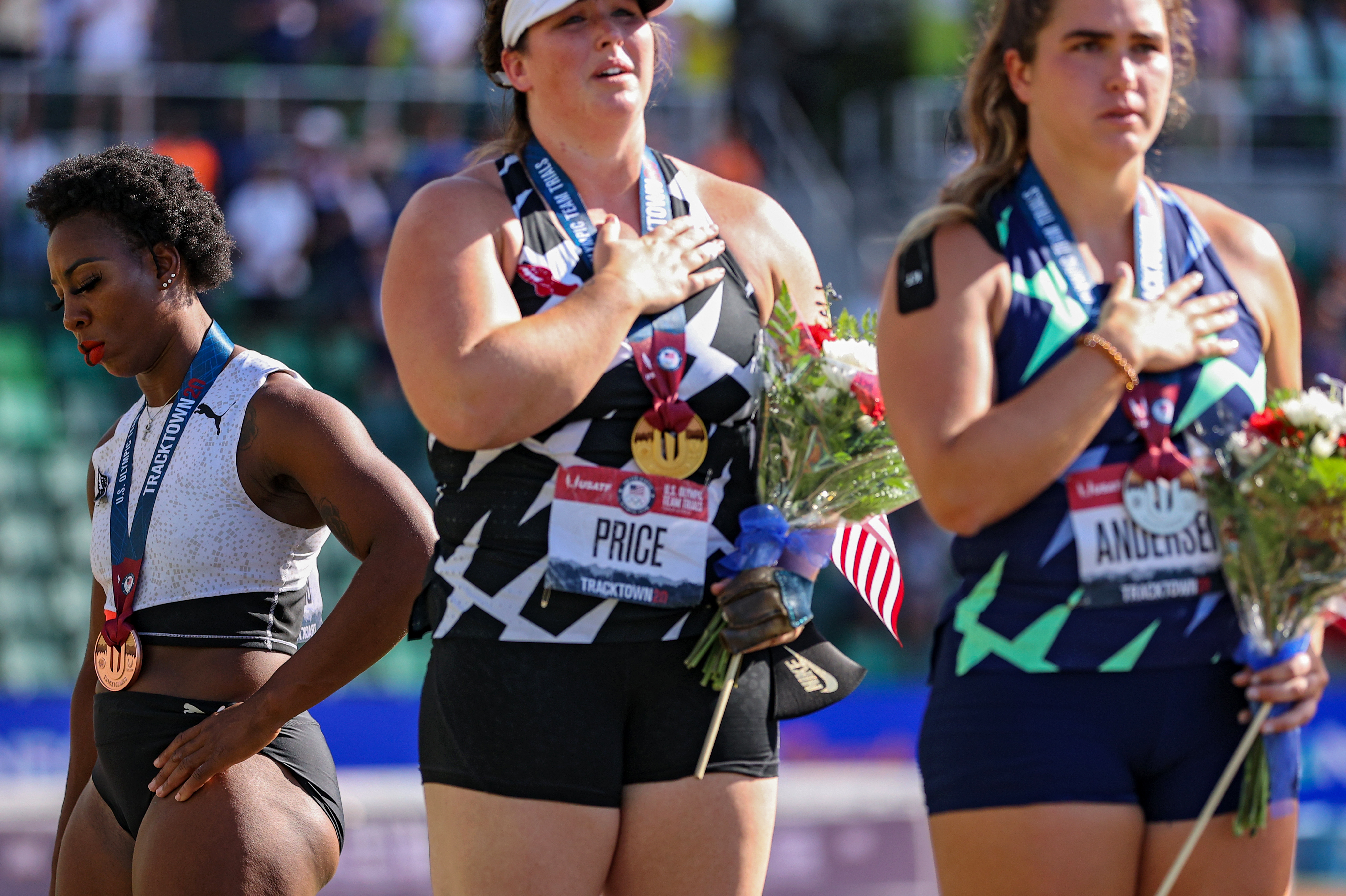 Gwendolyn Berry (left) turned away from the U.S. flag in protest on the podium after the Women’s Hammer Throw final of the 2020 U.S. Olympic Track & Field Team Trials last month. (Patrick Smith/Getty Images)

What would a gathering of the world’s athletes be these days without protest? In recent years, athlete activism has become common — and controversial.

Olympic activism will be on display as early as Wednesday, when competition begins in women’s soccer and softball. The British women’s soccer team opens against Chile (Wednesday July 21 at 3:30 a.m. ET), with a pledge to collectively take a knee before its games in Tokyo. “It’s important we use our platforms to help in any way we can,” said English defender Demi Stokes.

The International Olympic Committee recently relaxed its rule banning political demonstrations at the games, but the committee has been criticized for still not allowing any form of protest during medal ceremonies, when it’s bound to have greatest impact. IOC President Thomas Bach recently warned against “divisive statements” upsetting “peaceful competition.” We’ll see if Olympians choose to challenge that, including U.S. hammer thrower Gwen Berry, who turned her back on the U.S. flag during a medal ceremony at last month’s track and field Olympic Trials.

10. The big question is how much coronavirus will ultimately affect the Games

Athletes and others in the Olympic bubble have to go through many rounds of testing and strict safety measures to try to keep the coronavirus contained. Tens of thousands of people have entered Japan for the Olympics, and the first positive tests have popped up in the Olympic village. International Olympic Committee officials acknowledge that risks exist but stress that they are minimal.

Still, as foreign visitors continue to stream into the country, questions remain about whether the overwhelmed Olympic organizers will be able to keep positive cases isolated from other competitors and the general population. It’s also clear that a positive case on a team could potentially mean the whole group wouldn’t be allowed to compete. If medal favorites are forced to quarantine, that could mean major upsets.