Young people from the Rosebud Sioux Tribe pray during a ceremony at the U.S. Army's Carlisle Barracks, in Carlisle, Pa., Wednesday, July 14, 2021. The disinterred remains of nine Native American children who died more than a century ago while attending a government-run school in Pennsylvania were headed home to Rosebud Sioux tribal lands in South Dakota on Wednesday after a ceremony returning them to relatives.

"We want our children home no matter how long it takes"

(Carlisle) — The disinterred remains of nine Native American children who died more than a century ago while attending a government-run school in Pennsylvania were headed home to Rosebud Sioux tribal lands in South Dakota on Wednesday after a ceremony returning them to relatives.

The handoff at a graveyard on the grounds of the U.S. Army’s Carlisle Barracks was part of the fourth set of transfers to take place since 2017. The remains of an Alaskan Aleut child were returned to her tribe earlier this summer.

“We want our children home no matter how long it takes,” said U.S. Interior Secretary Deb Haaland, who in June announced a nationwide investigation into the boarding schools that attempted to assimilate Indigenous children into white society. 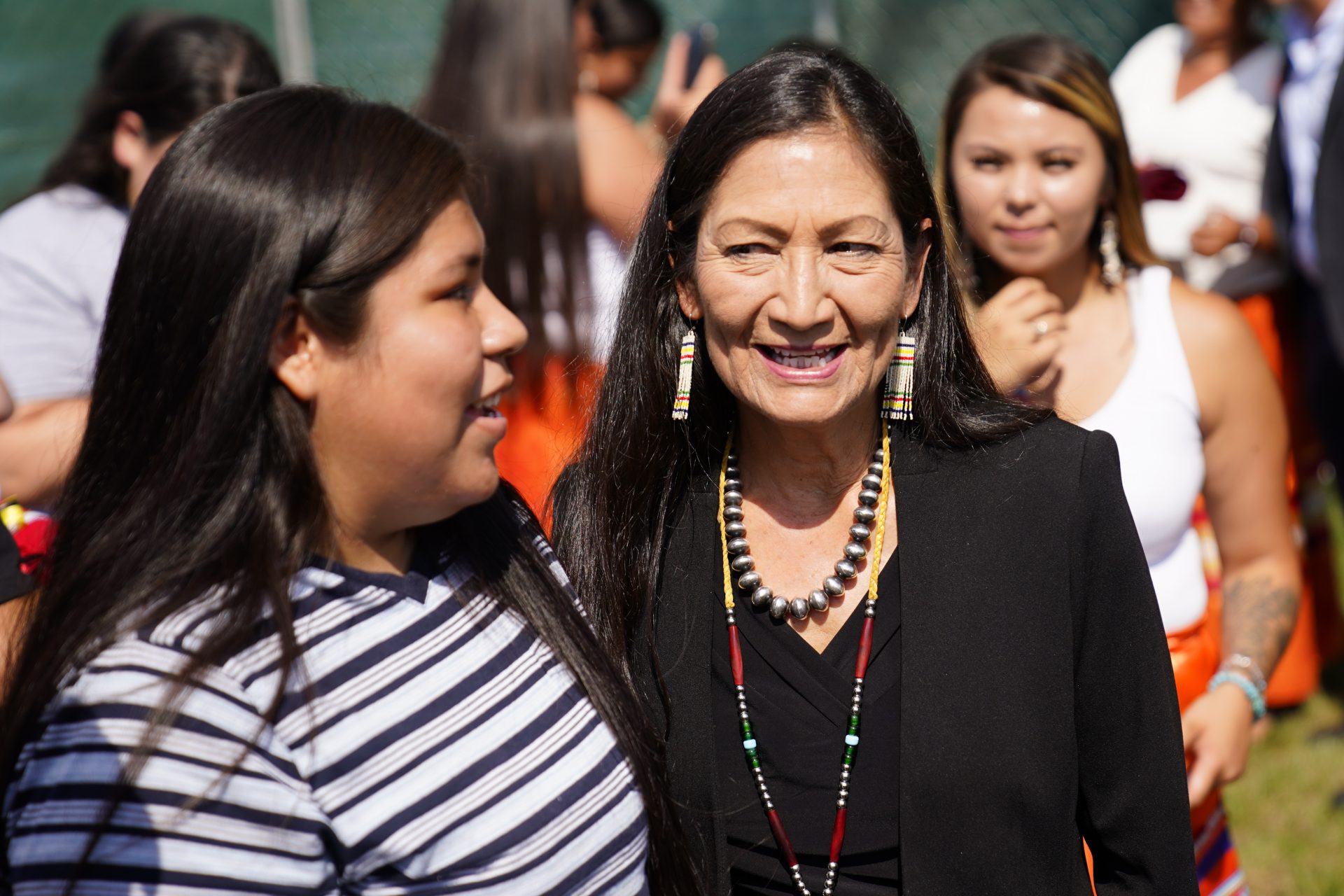 Interior Secretary Deb Haaland meets with young people from the Rosebud Sioux Tribe after a ceremony at the U.S. Army’s Carlisle Barracks.

Haaland, the first Native American to serve as a Cabinet secretary, said at the event that “forced assimilation practices” stripped away the children’s clothing, their language and their culture. She said the government aims to locate the schools and burial sites and identify the names and tribal affiliations of children from the boarding schools around the country.

Nearly a thousand unmarked graves have been discovered in recent months at former residential school sites for Indigenous children in Canada.

In Pennsylvania, the nine sets of remains inside small wooden coffins were carried past a phalanx of tribal members and well-wishers before being loaded into a vehicle trailer to be driven to Sioux City, Iowa. The children died between 1880 and 1910.

Ione Quigley, the tribe’s historic preservation officer, recounted how she attended the disinterment earlier this week and used red ochre to prepare the remains in a traditional way.

“We got everything done as respectfully and honorably as possible,” Quigley said. 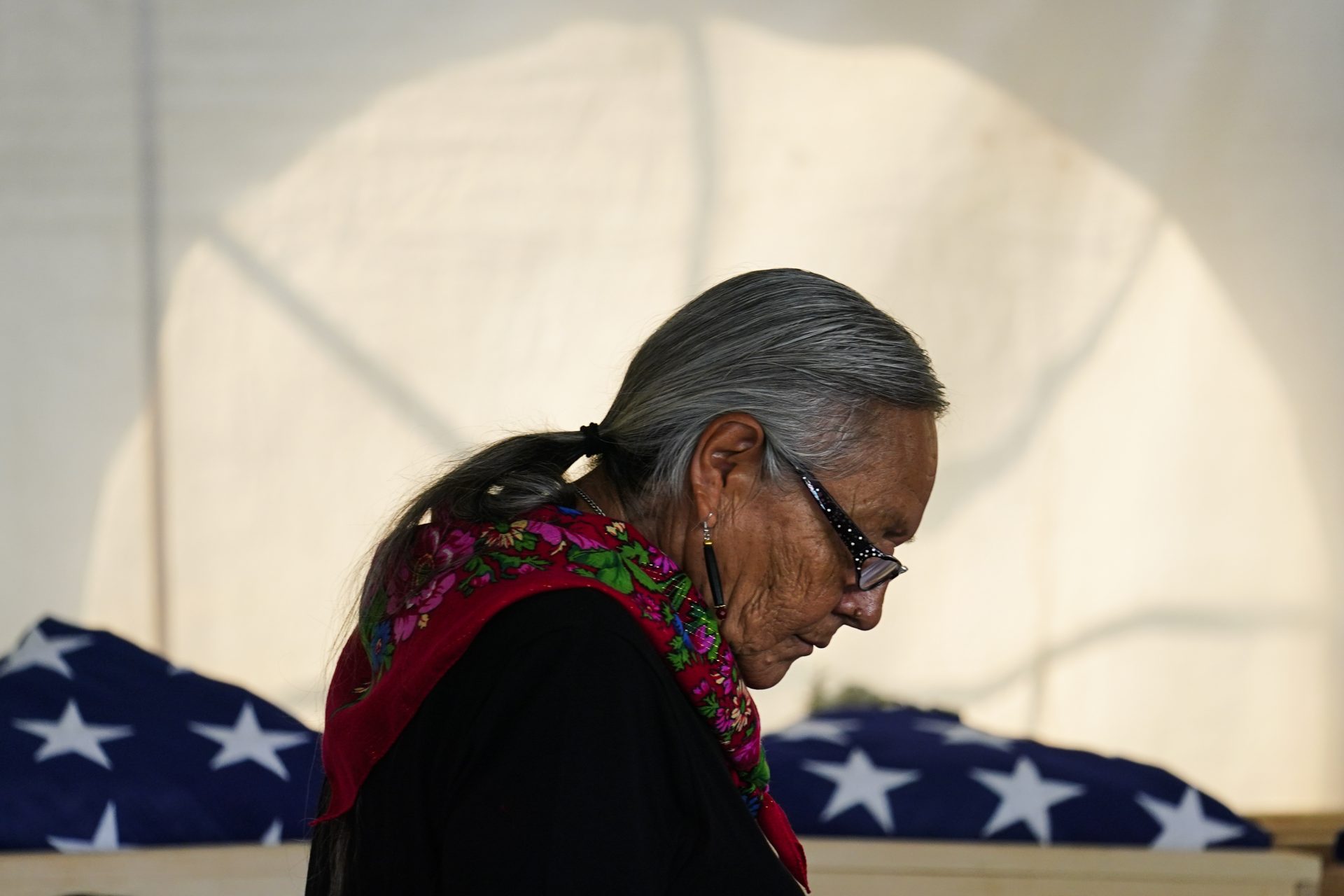 Ione Quigley, the Rosebud Sioux’s historic preservation officer, returns to her seat after speaking during the ceremony.

Russell Eagle Bear, a Rosebud Sioux tribal council representative, said a lodge was being prepared for a Friday ceremony at a Missouri River landing near Sioux City where children boarded a steamboat for the journey to the government-run Carlisle Indian Industrial School.

The Carlisle school, founded by an Army officer, took drastic steps to separate Native American students from their culture, including cutting their braids, dressing them in military-style uniforms and punishing them for speaking their native languages. They were forced to adopt European names.

More than 10,000 Native American children were taught there and endured harsh conditions that sometimes led to death from such diseases as tuberculosis.

Eagle Bear said children from the tribe endured ridicule along the trip to Carlisle in 1879, three years after the Battle of the Little Bighorn.

Tribal officials said that when the remains arrive in South Dakota, some will be buried in a veterans’ cemetery and others are destined for family graveyards.

“We’re here today and we are going to take our children home,” Eagle Bear said to about 100 attendees on Wednesday. “We have a big homecoming on the other end.”

Since August 2017, the Army has disinterred 22 remains of Native American children from the cemetery, including the 10 that occurred this year. In previous years, remains were turned over to the Northern Arapaho, Blackfeet, Oglala Sioux, Oneida, Omaha, Modoc and Iowa tribes.