Patricia Vickers, whose son was sentenced to life in prison when he was 17, speaks out against mandatory minimum sentences, such as those proposed by state Rep. Amen Brown.

After pushback, a widely criticized mandatory minimum bill is on hold 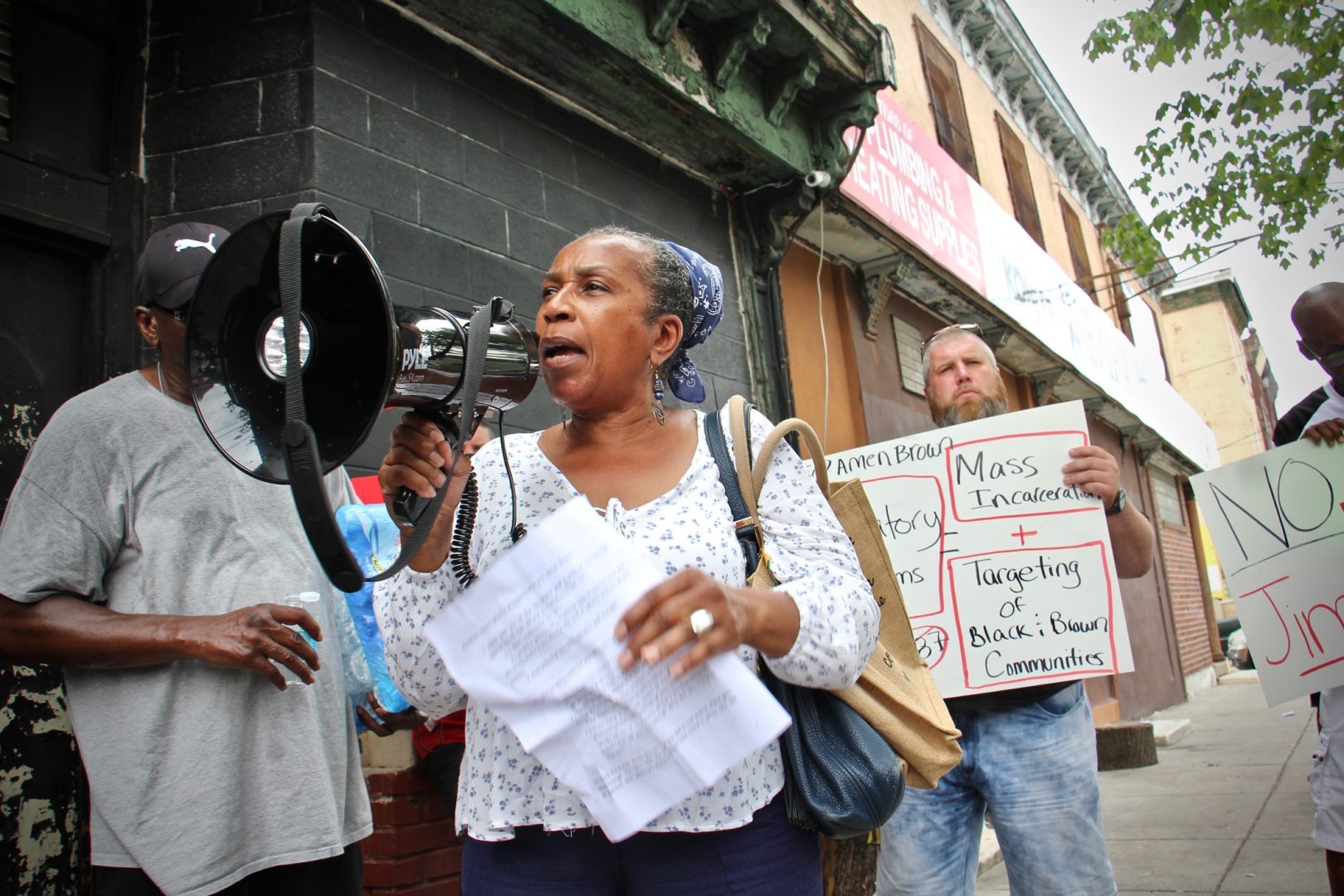 Patricia Vickers, whose son was sentenced to life in prison when he was 17, speaks out against mandatory minimum sentences, such as those proposed by state Rep. Amen Brown.

(Philadelphia) — Pennsylvania legislative leaders say a bill that would institute new mandatory minimum sentences for gun-related crime is “off the calendar,” at least temporarily, at the request of its sponsor, who has been inundated with criticism since introducing it.

That sponsor is Amen Brown, a freshman state representative from Philadelphia and — unusually, for a lawmaker promoting mandatory minimums — a Democrat.

Brown, speaking to WHYY about the bill in his office Thursday afternoon, couched the idea as an attempt to confront the city’s raging gun violence epidemic.

Outside, a small but indignant crowd of local activists had gathered, megaphones in hand, to denounce him for introducing the bill and sticking by it for months as most criminal justice reform advocates criticized it, and nearly all of his fellow Democrats dropped their support. 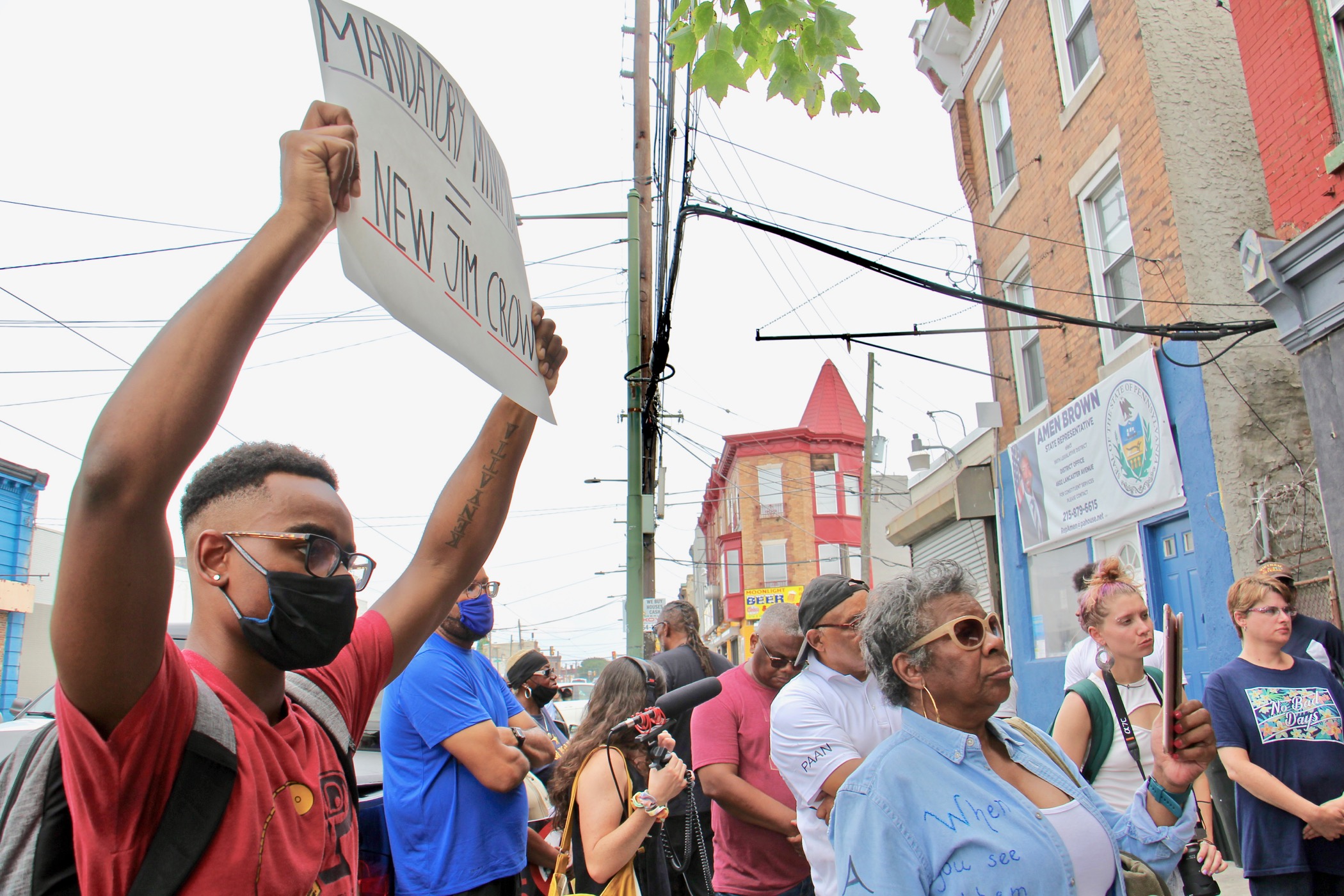 Protesters gather on Lancaster Avenue outside the office of state Rep. Amen Brown. The group was opposed to legislation proposed by Brown that would impose mandatory minimum sentences for repeat gun offenses. (Emma Lee/WHYY)

The crowd included members from the Abolitionist Law Center, the Working Families Party, and the Human Rights Coalition. But Brown said he attempted to speak to the group but was rebuffed.

“I want to sit down with people who can get things done and who want to really solve this problem. That’s what I thought we were going to be doing,” he said. “But instead they organize in front of my office.” 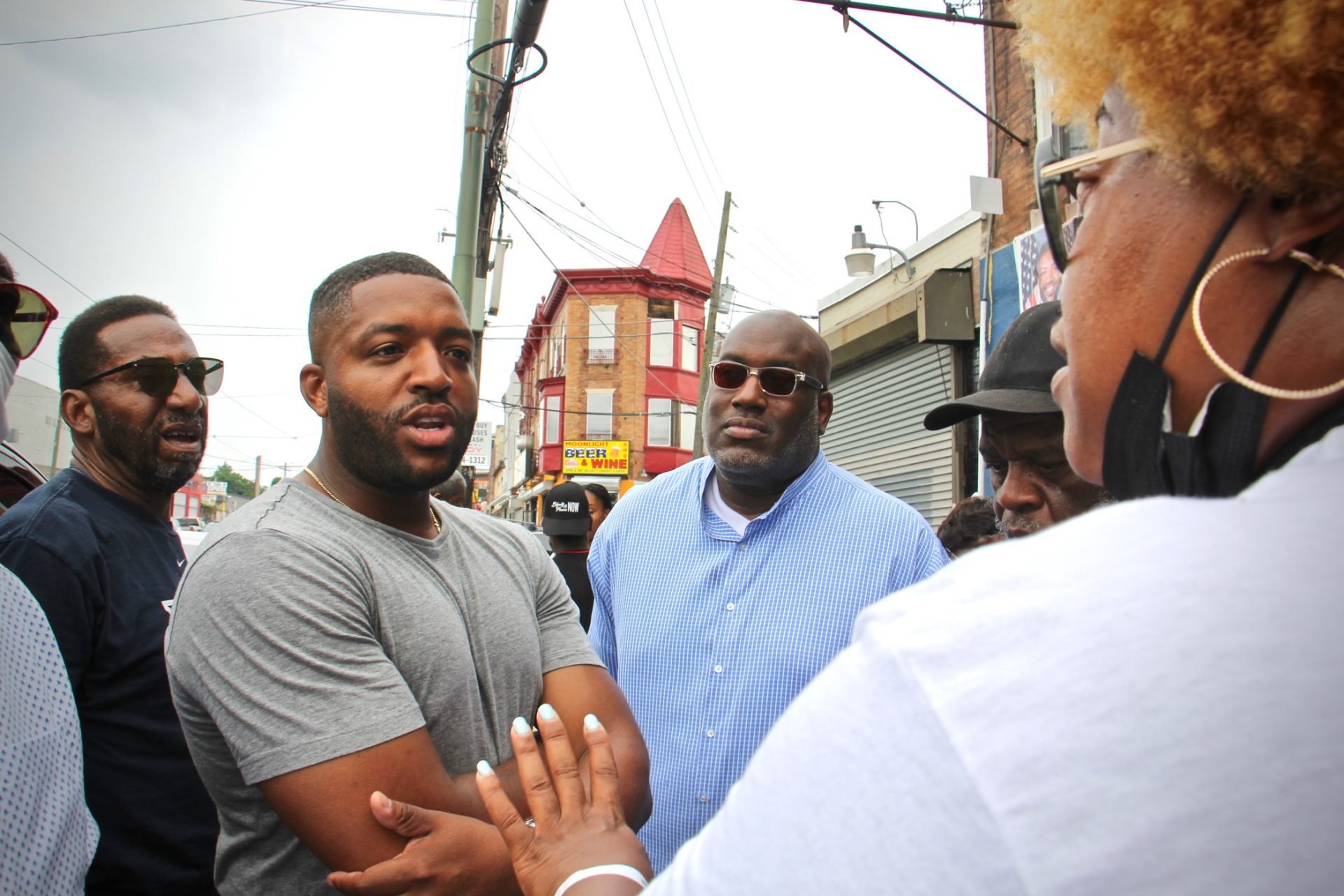 Pennsylvania state Rep. Amen Brown (gray shirt) talks with a protester outside his office on Lancaster Avenue. A group gathered there to speak out against Brown’s proposed legislation which would impose mandatory minimum sentences for repeat gun offenses.

Brown’s bill would create broad new mandatory minimums for people with prior criminal records who are arrested and convicted of gun-related offenses, and would also allow people with certain priors to be held without bail. The West Philly representative has maintained that he’s trying to “get the conversation started” and notes Democratic Gov. Tom Wolf won’t sign the bill. Groups like the American Civil Liberties Union say the effort is counterproductive, and “may be the worst criminal justice bill that we’ve seen.”

Several studies have shown that mandatory minimum sentences are disproportionately given to Black people. Tough sentencing laws like these began coming into vogue during crime waves in the 1970s, but many of the harshest ones took effect in the 1990s. Crime rates then were already significantly lower, but the new rules fueled the United States’ rise to become a world leader in incarceration.

Brown’s bill already passed through the House Judiciary Committee, with all the committee’s Republicans voting for it, and all its Democrats voting against it. Jason Gottesman, a spokesman for GOP House Majority Leader Kerry Benninghoff, confirmed that it’s now on pause “at the request of the sponsor.”

Regardless of a sponsor’s wishes, however, the majority leader has the power to call up virtually any bill for a vote at any time. Asked whether Benninghoff had plans to act against Brown’s request, Gottesman said he was “not going to entertain hypotheticals.”

That was one of the chief concerns among the protesters outside Brown’s office. They fear he may be giving Republicans — many of whom support mandatory minimum sentences — ammunition in their fight to reinstate them after the state Supreme Court knocked down the legality of many of the sentences in 2015 following precedence set in 2013 by the U.S. Supreme Court. 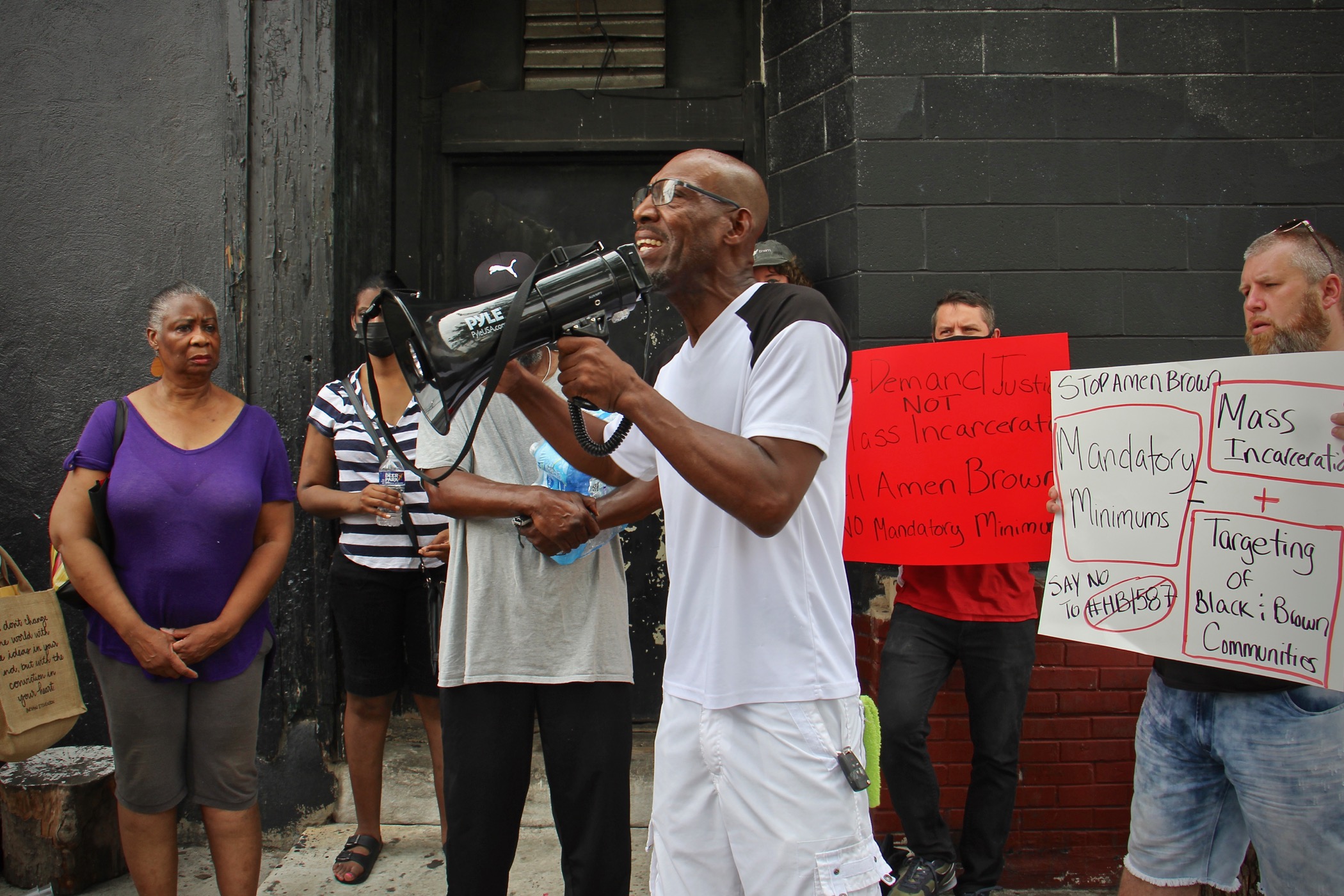 John Thompson, an organizer with the Abolitionist Law Center, said as far as he can tell, Brown’s legislation is “effectively a Republican bill now, it’s out of his hands.”

“When we tried to tell him this was a bad bill, ‘Don’t put this in,’ he wouldn’t listen,” he added. “This is a result of his arrogance.”

Thompson, who was convicted of first-degree murder when he was 17 and served 37 years of a life sentence before his conviction was vacated, added that Brown’s assurances that he’s simply making a point and the governor will veto the bill don’t make him feel any better.

A Democrat won’t be the governor forever, he noted, and he doesn’t think it’s wise to give mandatory minimum sentences traction at any time. 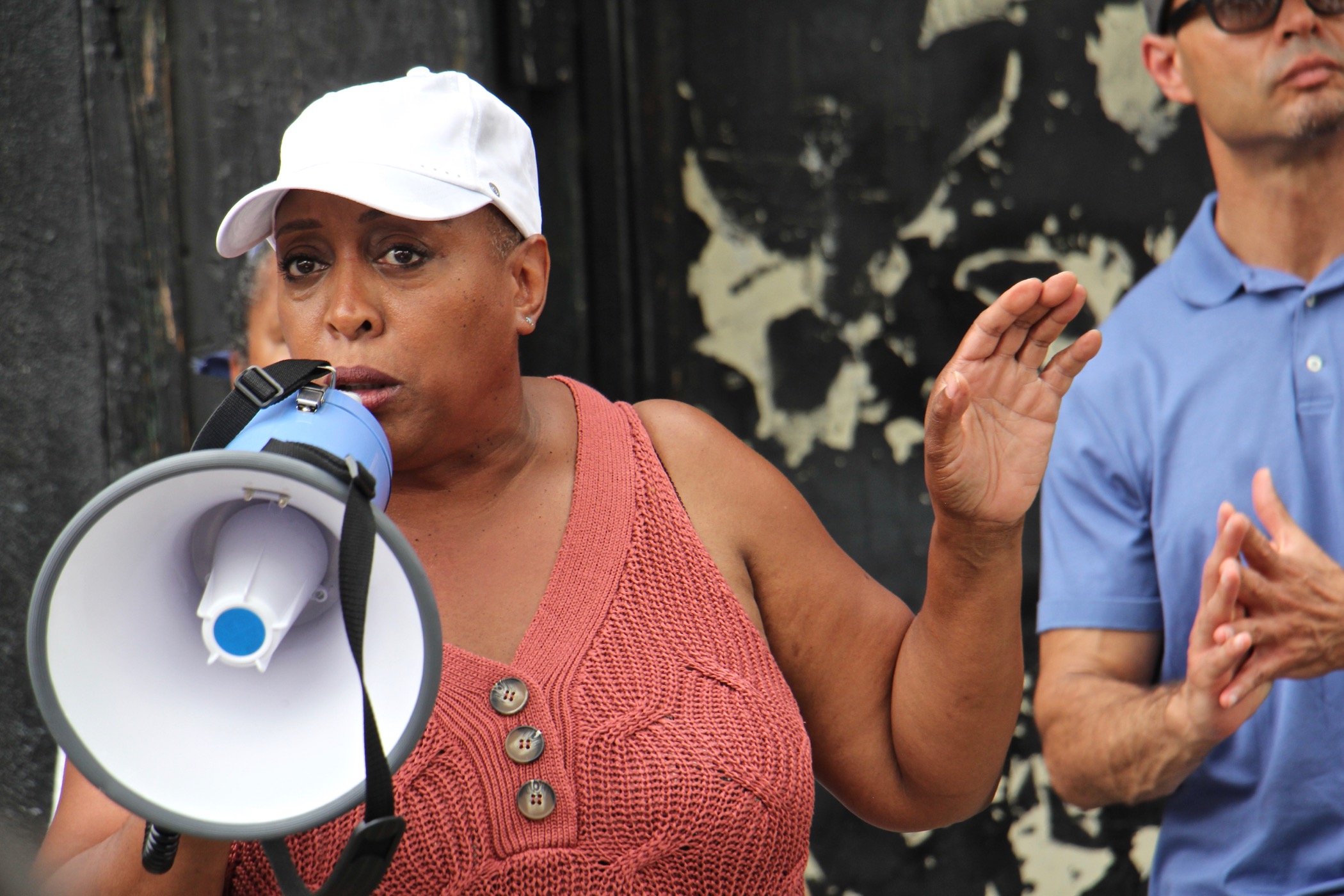 Initially, Brown’s bill had a number of Democratic co-sponsors. But several members confirmed to WHYY that the full language hadn’t yet been available when many signed on, and nearly all departed once the bill was formally introduced. The only two remaining Democratic sponsors are Brown and Rep. Frank Burns of Cambria County, one of the caucus’s more conservative members.

The protest at Brown’s West Philly office came on the heels of a holiday weekend that saw Philadelphia besieged with gun violence, and as city leaders plead for gun control and more violence prevention funding. Homicides in the city have spiked in the past two years. With 286 people murdered in 2021, it’s on pace to be the deadliest year in at least six decades.

The small crowd also included some supporters of Brown’s approach to criminal justice legislation — people who believe mandatory minimum sentences, or some other tough on crime scheme, might be justified as gun homicide rates soar. 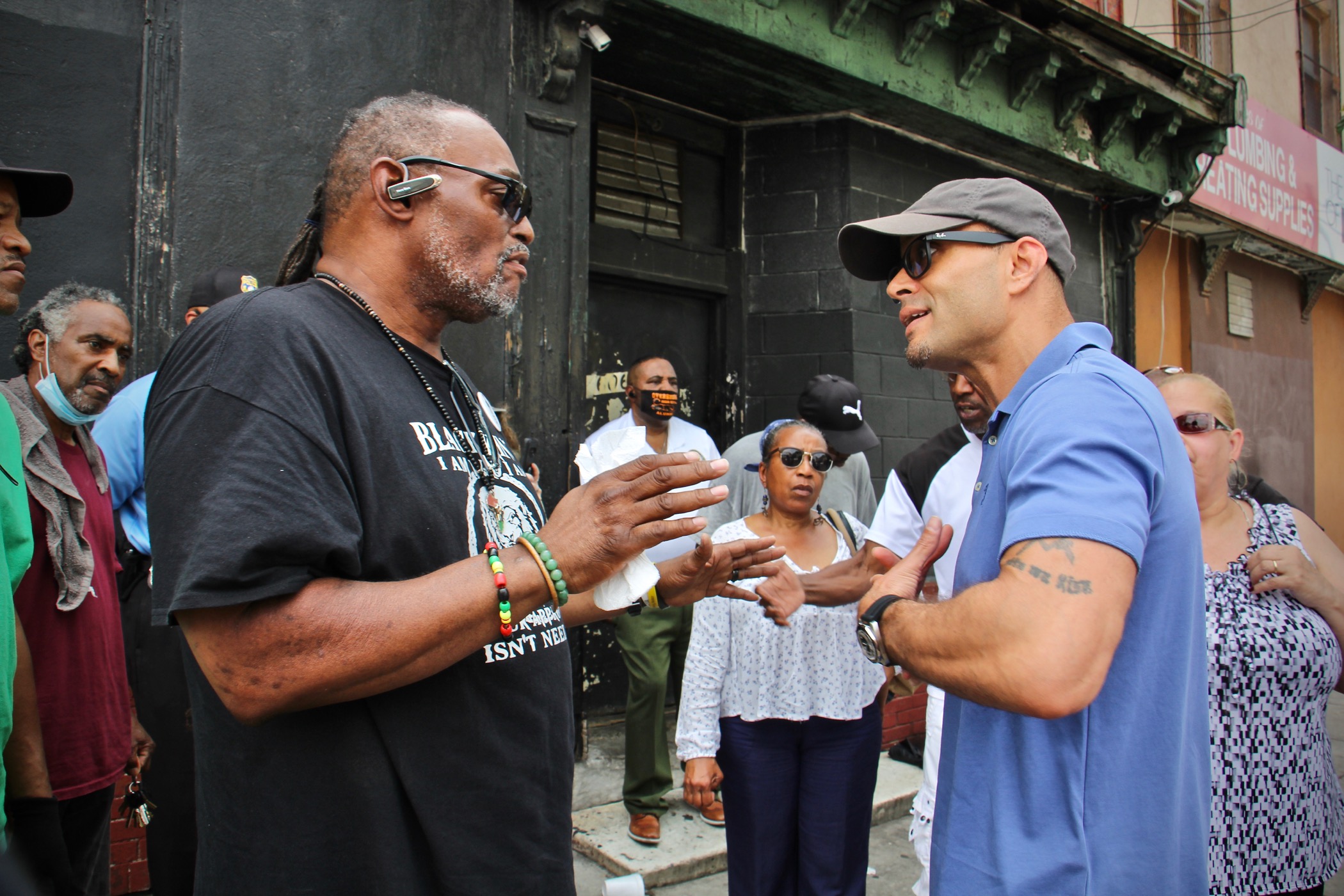 One of them was Kofi Atiba Kwasi, who introduced himself as an organizer of a small community group, the West Philly Voting Bloc, and said he doesn’t think Brown’s proposal “is so outrageous that we can’t work around it and get the bill straightened out.”

“The brother sparked a conversation around, ‘Why do we have people in the streets during these shootings that have three and four shootings?’” he said.

All the people protesting against Brown’s bill also said they’re desperate for ways to stop shootings.

Movita Johnson-Harrell, who held Brown’s State House seat before her 2020 conviction for stealing from a nonprofit she founded, said she’s been on all sides of the issue. She has lost several family members, including two sons, to gun violence, she has served in Harrisburg, she has been to jail — and can’t see how mandatory minimum sentences will help. 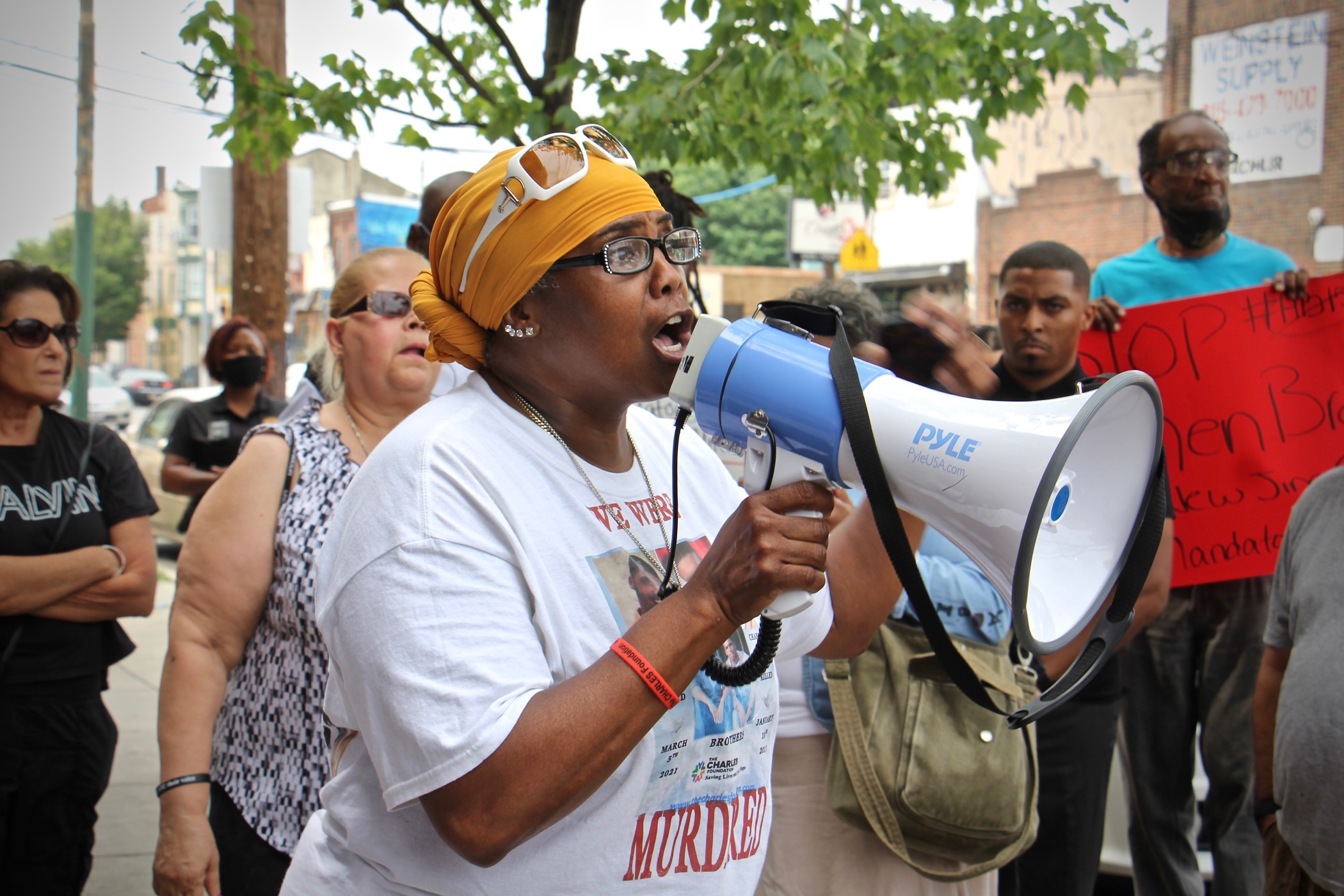 Like Johnson-Harrell, other mandatory minimum opponents think programs to get at the root of the gun violence epidemic have to be the priority.

Over the last year, Philadelphia has touted a new gun violence prevention project — modeled on an older initiative — called the Group Violence Intervention Program. It uses a strategy known as focused deterrence, in which police identify people as potential shooters, and a group assembled by the city offers them social services and job training, and threatens enforcement if violence doesn’t stop.

The city has said it doesn’t yet have an evaluation of the program’s first year, which has seen violence rise exponentially. Its recently-passed budget puts $155 million toward anti-violence initiatives.

Brown maintains he’s going to keep working on violence prevention in his own way. Asked directly whether he still supports mandatory minimum sentences or plans to introduce them again, he wouldn’t say.

“I do want accountability,” he said. “These people who are committing these violent crimes need to be held accountable. And I’m going to stand on that.”

New Pa. law allows students to repeat a grade, but the deadline to decide is one week away