The 13-county region known as the Pennsylvania Wilds has been growing its tourism industry based on outdoor recreational opportunities. Leaders of the movement say they are optimistic for continuous growth coming out of the pandemic. 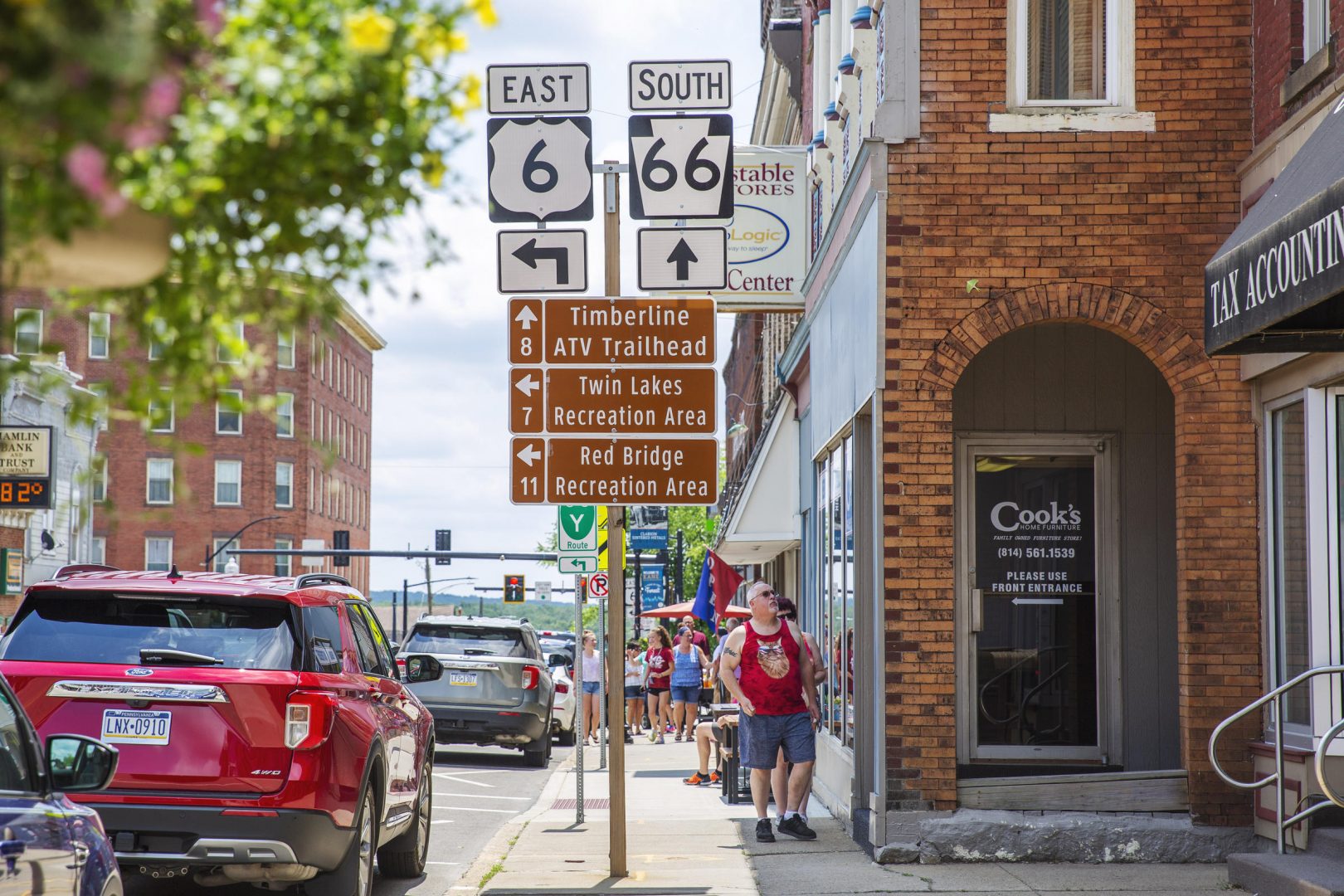 The 13-county region known as the Pennsylvania Wilds has been growing its tourism industry based on outdoor recreational opportunities. Leaders of the movement say they are optimistic for continuous growth coming out of the pandemic.

(Kane) — On the last Saturday of June, Evergreen Park in Kane was buzzing with activities from the annual “Art in the Wilds” art show. Residents and visitors cruised among white tents, lined up for fair foods and stopped to greet friends. It was also alumni weekend for the Kane Area School District.

Glass work artist Kathleen Schnell said the vibrant scene was sorely missed last year, when the show was virtual because of COVID-19. She came from Wellsboro in Tioga County and said this is the only art show she goes to.

“Oh, it means a world of difference to me,” Schnell said. “With my fused glass, people have to feel it and see it. It just doesn’t resonate at all online, so it’s very important to be in person, be able to discuss the process and how it’s made and what to expect from the fused glass. So it’s a big plus for me to be able to come back to this area.”

Her tent, one of 36 this year, saw a lot of foot traffic. Attendees stopped to ask questions about the colorful bowls, plates and ornaments. Organizers estimated about 4,700 people attended the 2021 Art in the Wilds show in Kane, Pennsylvania. (Min Xian/WPSU)

Schnell teaches classes in her Wellsboro studio, and she said curious customers at art shows are a main source of students. The other part of her business is sales of her art work, which she said was going really well on that first day of Art in the Wilds.

“There was such a void when we went through what we went through, so I think everybody’s really enjoying these times, being able to express their selves by buying pieces that they enjoy,” Schnell said.

Organizers estimated about 4,700 people attended the show this year. With COVID-19 remaining a concern, they said it’s a good turnout. It was not far below the estimated 5,600 participants in 2019.

Executive Director of the show, Merry Ryding, is an artist herself, painting with hot wax and in mixed media. Ryding said one of the core missions of Art in the Wilds is to promote the role of arts in rural Pennsylvania.

“I think artists are critical in defining cultural integrity, whatever your area is. And here we are in the Northern Alleghenies,” Ryding said. “We are not in New York City. We’re not the desert southwest. We’re not the Maine coast. We are Northern Allegheny, Pennsylvania Wilds. So what does that look like? And the artists are critical to help define our cultural integrity for this area.” Since 2006, Art in the Wilds has grown to attract visitors from wider and wider geographic footprints. (Min Xian/WPSU)

Another mission of the show is to promote economic development. Since 2006, the show has grown to attract visitors from wider and wider geographic footprints. President of the show’s Board of Directors, Julie Cleland, said the combination of fine arts and natural beauty from the Allegheny National Forest gives Kane a strong appeal as a tourist destination.

The art show is one piece in a larger movement to revitalize the Pennsylvania Wilds region, Cleland said. She and other community leaders hope expanding recreation and tourism might help lift the economically distressed region out of years of divestment and population loss.

The Pennsylvania Wilds partnership began in 2003 as an initiative to better manage state parks when the state realized visitors were crowding the area during elk watching season. Over time it grew into a widespread effort for natural conservation and economic development. It officially became a non-profit in 2013.

It’s difficult to measure exactly how much the group’s work over the years has increased visitor spending, job creation and quality of life in the 13 rural counties. But for Ta Enos, founder and CEO of the Pennsylvania Wilds Center, there is no doubt that recreation is now an important branch of growth. According to the latest available data by the center in 2018, the $1.8 billion industry accounted for 11% of the regional economy. A 2015 USDA report shows Potter and Tioga Counties, both part of the Pennsylvania Wilds region, as recreation dependent economies. (USDA)

“Growing the outdoor recreation industry in the Pennsylvania Wilds was a really great idea 15 years ago, based on recreation trends that were starting to happen back then,” Enos said. “But now, it’s only become even more important since the pandemic.”

Pennsylvania state parks saw a 22% increase in visitors in 2020, as people flocked to the outdoors during the pandemic. Enos said she expects an even larger shift in people’s attitudes toward regional travel coming out of the pandemic.

“We’re in a position for a strong recovery, because of the kind of destination that we are, because we are rural, we are outdoor based. All those things that you know, coming out of this crisis, people are kind of looking for those experiences,” she said. “The pandemic has not slowed that at all, the overall scope of what we’re trying to accomplish in the long term. If anything, it’s sped it up, I think, it’s shone a new light onto it.”

Enos and her partners throughout the Pennsylvania Wilds counties believe their collaborative strategy is working. Instead of competing with each other, the counties encourage tourists to explore as much as possible.

Stephan Goetz, director of the Northeast Regional Center for Rural Development, said rural communities have not always appreciated tourism as an industry, but research shows a regional economy can be made more resilient and sustainable by tourist dollars. Research shows a regional economy can be made more resilient and sustainable by tourist dollars. (Min Xian/WPSU)

“What that means is they come in from the outside. They get spent locally, like they get spent in a bed and breakfast or in a gift shop, what have you. Then they multiply through the economy,” Goetz said. “They have an even bigger effect than just the single dollars.”

He also found a parallel between recovering economically from the 2008 financial crisis and from the shocks of the pandemic.

“We found that communities with a stronger or a larger recreational sector rebounded more quickly from that 2008 shock, which was very serious,” Goetz said. “And we think what happened is that consumers who would have traveled maybe overseas, they would have gotten on the plane and flown to Europe or Asia or Australia, New Zealand, they instead stayed local. And that really benefited these places, helped them rebound more quickly.”

Back in Kane, fine art photographer Larry Downey said he thinks the rebound is happening. He said after having all 12 shows he usually goes to canceled last year, he sees both attendance and customer interest going “way up” this year.

“We do well, we’re treated well. It’s possibly our favorite show of the year,” Downey said.

And as a winner of a 2021 Art in the Wilds Award of Excellence, he said it’s nice to be recognized for his work inspired by the wildlife here in the Pennsylvania Wilds.