Protesters demonstrated in April outside Penn Museum over its handling of MOVE bombing victims' remains.

(Philadelphia) — Why did Philadelphia’s former health commissioner, Dr. Thomas Farley, order a box of remains belonging to victims of the 1985 MOVE bombing cremated and disposed of without telling the surviving family members of the Africa family?

It’s a key question in the latest chapter of the city’s desecration of the victims’ remains.

After Farley told Mayor Jim Kenney about the decision he made in 2017 concerning a box of “bones and bone fragments” that had been found in the city’s Medical Examiner’s Office, he was forced to resign. The medical examiner, Dr. Sam Gulino, was put on administrative leave. In a statement, Farley said the remains were “specimens” related to the autopsies of the victims and that he had followed standard procedure for such materials. (Two days later, the city revealed Farley’s order had never been carried out and that the victims’ remains were still around.)

Now, that practice is under scrutiny as the city investigates what happened. It’s unclear whether the bones found in the box were actually autopsy specimens or unidentified remains forgotten in a muddled chain of custody.

A former employee of the Philadelphia Medical Examiner’s Office is skeptical the remains in the box were autopsy samples.

Dr. Gregory McDonald, who worked as an assistant medical examiner in Philadelphia for 14 years, said while the bones have not been identified, it’s clear they likely belonged to at least one of the MOVE bombing victims and the city could have contacted the family or a representative.

“There are usually other family members and, potentially, lawyers or someone, executors of the states, and you can contact them and decide what to do,” he said.

WHYY News spoke to medical examiner’s offices in other large jurisdictions that confirmed it is common practice to dispose of autopsy specimens without telling the next of kin. However, there is room for nuance when dealing with delicate situations that involve unclaimed, unidentified, or damaged human remains.

When Philadelphia officials dropped explosives on MOVE headquarters, a rowhouse at 6221 Osage Avenue, surviving members of the Black liberation group were left to grieve the deaths of 11 people, including five children. For them, Farley’s 2017 order is just one instance in a long history of the city desecrating the remains of their loved ones.

According to Farley, it’s standard for the Philadelphia MEO to keep certain “specimens” before releasing remains to the next of kin, in case they’re needed for future investigations.

In his resignation, Farley said these specimens are disposed of in Philadelphia without notifying the family once investigations are completed.

City spokesperson Deana Gamble confirmed this practice has been in place for many years, though it is not codified in writing. According to Gamble, it’s designed to avoid the retraumatization of families months or years after the death of a loved one.

“They’re little biopsies that, in case a question comes up in a month or a year or two years later, we can go back to that little jar and put in some … microscopic sections or do DNA testing or what have you,” said James Gill, a forensic pathologist, practicing medical examiner in Connecticut, and the president of the National Association of Medical Examiners.

Taking these samples allows medical examiners to release bodies to families for burial and conduct additional tests should new questions arise after burial and prevent exhuming the body, Gill said. Keeping the samples for a year or longer is routine and standard across the country, and since the testing of these samples is considered a routine lab procedure, offices aren’t required to inform a family when all examinations are complete, he said.

McDonald, now chief deputy coroner for Montgomery County and dean of the School of Health Sciences at the Philadelphia College of Osteopathic Medicine, says there’s a case for keeping samples of remains because of changes in technology.

“When you hold on to bones, fragments like that, the good part about it — if there would be a good thing — is you do have advances in technology like we do with DNA,” said McDonald. “Every year, we get better and better at identification, so having those fragments with today’s technology in contrast to 1985 technology, you could do potentially a lot with it.”

However, McDonald said the MEO should tell the family if it plans to hold onto the remains long term and find out if they want updates whenever a positive identification is made.

That conversation never happened between the Philadelphia MEO and relatives of the victims to whom these bones may have belonged.

The city hopes its independent investigation will provide an answer as to whether these bones and bone fragments were actually autopsy specimens or unidentified remains that should have been returned to the family.

‘Human remains … shouldn’t be left for years in limbo’

The city has vowed to investigate how the box remained undiscovered in the MEO until 2017 and to make policy changes that help the city “better understand the wishes of families in respect to retained tissue without adding to their trauma,” wrote Gamble in an email.

This is not the first time the Philadelphia Medical Examiner’s Office has been put under a microscope for its handling of the remains of MOVE victims.

Even before the 1985 bombing, MEO staff were stretched thin, a problem that was well-documented after the office’s disastrous handling of the MOVE victims’ autopsies. Pathologists responding to the scene allowed a crane to excavate remains, further destroying them in the process, and then they failed to store the victims’ bodies in adequate refrigeration.

A 1986 report by an independent commission charged with investigating the bombing said the office’s performance was “unprofessional and violated generally accepted practices for pathologists.”

The bungled retrieval of the victims’ remains made identification more difficult for forensic pathologists, who disagreed over some of the final identifications. As a result of the dispute, some of the remains stayed in the hands of two anthropologists with ties to the University of Pennsylvania and Princeton University for further study, WHYY’s Billy Penn reported in April.

News that Penn’s Janet Monge continued to investigate the identity of this set of remains from 2016 through 2019 — and used them in an online forensics course — sparked protests in Philly. The public criticism is what prompted Farley to come forward in May with news the MEO had another set of remains in a box. In his resignation statement, Farley said it prompted him to “reconsider” his directive to have the bones destroyed. 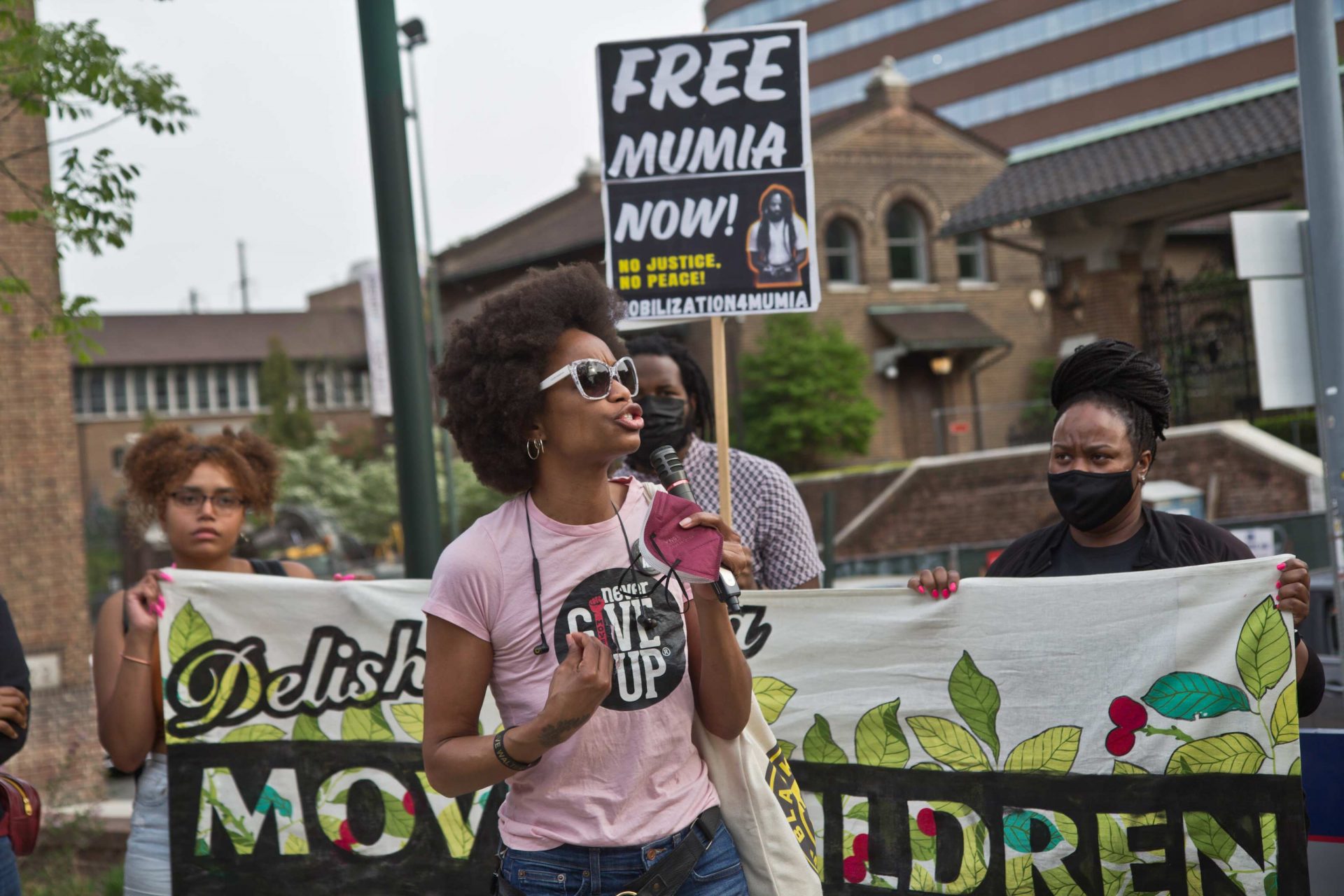 Organizer YahNé Ndgo protests outside Penn Museum on April 28 over the museum’s mistreatment of the remains believed to belong to children killed in the 1985 MOVE bombing.

McDonald told WHYY News when he got to the office as a fellow in 1992, pathologists were overworked and he was personally conducting four to six autopsies a day in facilities that needed upkeep — ultimately, reasons why he left in 2008. A current MEO employee told The Philadelphia Inquirer the office is still stretched thin and the person was skeptical of real change at the office.

If the city’s investigation finds the box did not contain autopsy specimens, the conversation about how these remains should have been handled and why they sat in a box for decades could change.

Gill said identifying remains and connecting them with surviving kin must be a top priority for medical examiners. Doing so, however, becomes a particularly difficult task in situations involving mass fatalities, where many bodies are commingled and pathologists are left examining small bone fragments.

“Sometimes, you know, you’re dealing with a piece of bone that’s a half an inch in diameter,” said Gill. “You can’t even tell what part of the skeleton the bone is from because it’s so fragmented and so small. But I think most medical examiners recognize that for families, [bone fragments] still can be a very important thing for them to have.”

Because there is no one-size-fits-all policy for these types of catastrophes, much is left up to the discretion of individual MEOS, which typically have standard procedures on how to handle unclaimed and unidentified remains.

A spokesperson for the Los Angeles County’s medical examiner said the coroner would always try to identify a human bone and release it to the next of kin. If a family can’t afford to make arrangements for a burial, the bone fragments are cremated. The county holds onto cremains for three years before burying them in the cemetery during its Annual Burial of the Unclaimed.

The Cook County Medical Examiner’s Office in Illinois follows a similar process where if a fragment can be identified, the family will be contacted. If the body or remains go unclaimed, the office will perform what it calls an indigent cremation. 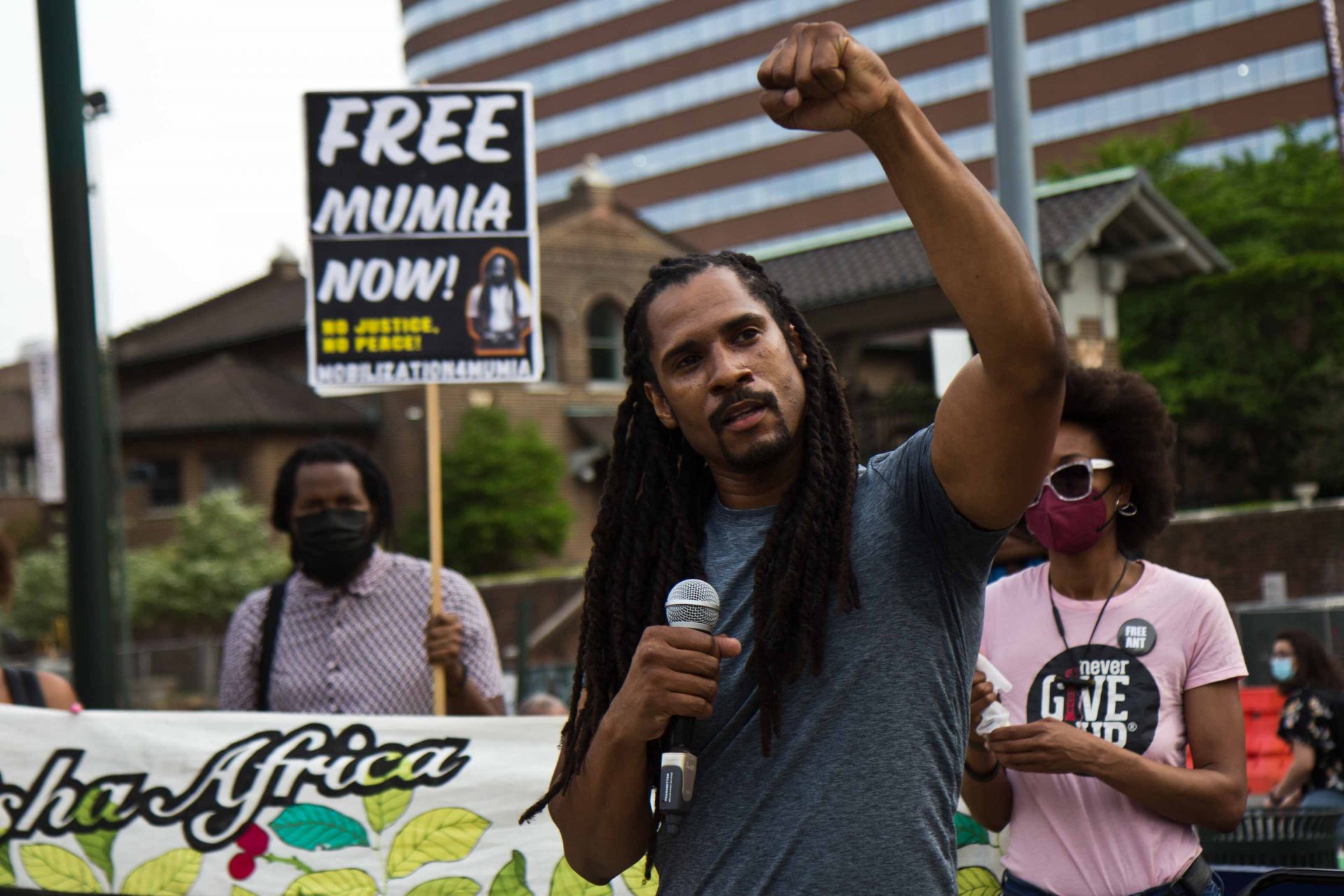 Mike Africa, joined by BLM Philly and the Black Philly Radical Collective and supporters protested outside the Penn Museum on April 28, 2021, over the museum’s mistreatment of the remains of children Tree and Delisha Africa who were killed when Philadelphia police bombed the MOVE Organization’s headquarters in 1985.

The key to carrying out these various policies is keeping a timeline for how long an office will hold onto those small biopsies, unclaimed bodies, and unidentified remains.

For example, Rodney Adams, general counsel for the District of Columbia’s Office of the Chief Medical Examiner, said blood and pathology slides are retained for five years and then destroyed, adding the office “does not retain identified skeletal remains.”

Writing down these operating procedures can not only offer clarity for individual offices, Gill said it can offer legal protection for the MEOs.

“I think the ultimate idea is that those remains, because they are human remains, they need to have a final destination at some point and they just shouldn’t be left for years in limbo,” said Gill. “If it were a body, a whole body in the office, no one in the office would let a body sit in their office for 20 years.”

For Sue Africa and two other living MOVE members who lost children in the MOVE bombing, no amount of investigations or policy changes will bring their loved ones back.

“Those remains, no matter who they are, are going to be taken care of by us because our belief is life and whether they’re who they say they are or are not,” she said, “we are going to take those bones.”

At this point, Africa said, they just want to put their loved ones to rest.