In the wake of the 2020 election and its rash of unfounded claims of fraudulent voting and illegitimate results, many GOP-controlled legislatures — particularly in swing states — have moved to restrict the vote in some way. 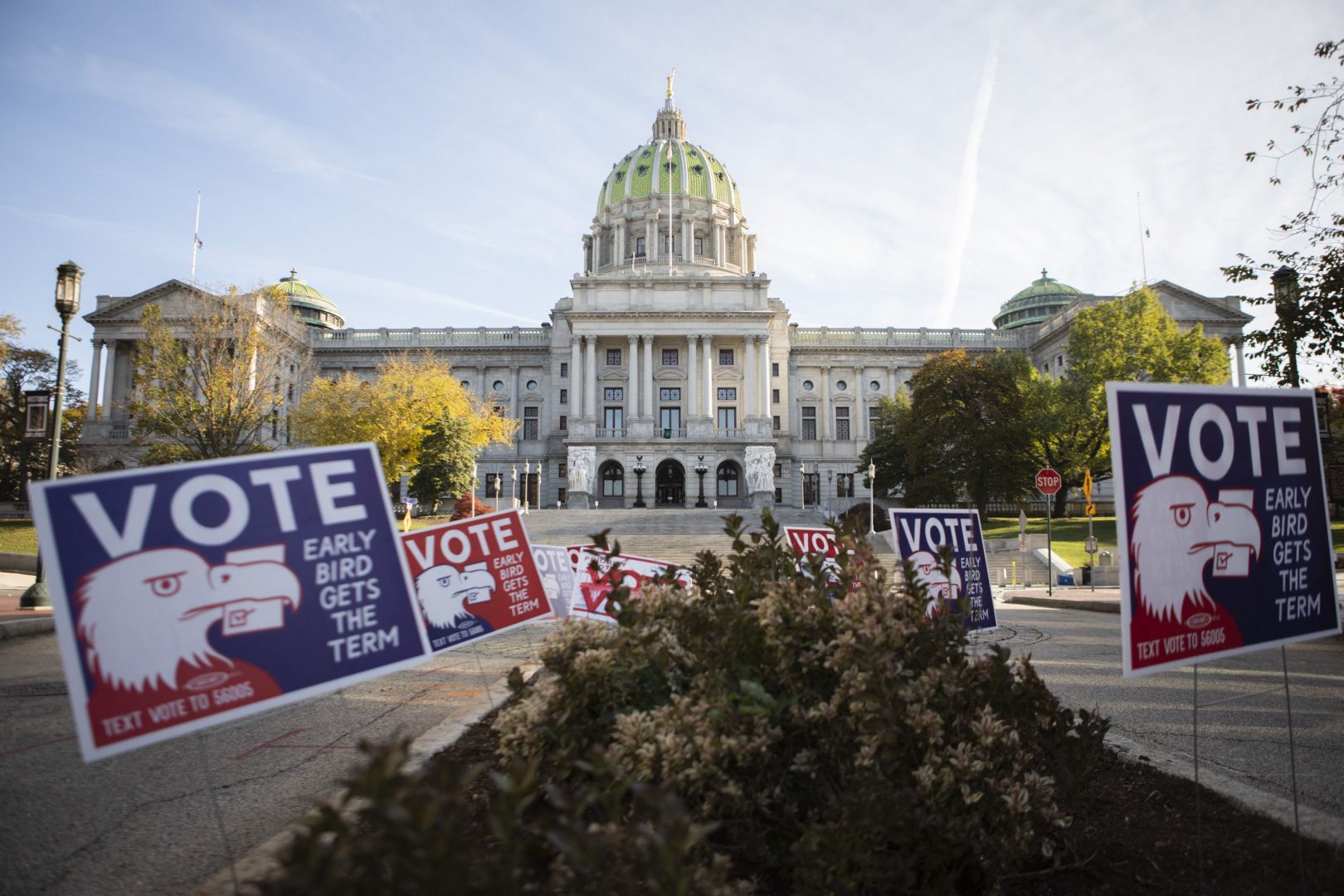 (Philadelphia) — Facing a veto on their sweeping plan to overhaul state election laws, Pennsylvania Republicans have set in motion a plan to circumvent the Democratic governor and create a mandatory voter ID requirement.

They aim to do it via an amendment to the state constitution — a process that requires approval from the legislature and subsequent victory on a statewide ballot measure. Critics say it’s a technique that Republicans appear increasingly willing to use as they clash with Gov. Tom Wolf over highly politicized issues, like voting and the pandemic.

“The Republicans don’t want to go through the legislative process for their far-right whacky ideas because they know the governor will veto it,” said Sen. Vincent Hughes (D-Philadelphia). “So now they’re just going to change the constitution.”

GOP supporters of the tactic argue that approval by a majority of statewide voters would signal that an idea has merit.

“If that’s a veto no matter what, that’s why we have a constitutional amendment, to let the voters decide. And they will ultimately make the final decision on whether there should be voter ID in Pennsylvania,” said Senate President Pro Tempore Jake Corman (R-Centre).

Still, Democrats smell political gamesmanship. Hughes, who strongly opposes the amendment and voted against it when it passed the state Senate this week, has served in the chamber since 1994 and was a member of the House for several years before that — almost always in the minority party. He says he has seen a lot of procedural tricks during his time in Harrisburg, but this strikes him as a new development.

Constitutional amendments are relatively rare in Pennsylvania, in large part because passing them is time-consuming. They have to be approved in identical form by the legislature in two consecutive two-year sessions, then go to voters for a statewide referendum.

This year, though, the GOP found success with this strategy. After Wolf struck down Republicans’ attempts to end the COVID-19 emergency declaration, lawmakers approved two amendments that would give the legislature the power to more easily void those declarations. When voters approved them in the May election, the GOP-controlled House and Senate promptly ended Pennsylvania’s remaining COVID-19 mitigation measures.

“It’s clearly a pattern that has developed in the last year,” Hughes said. “And where does it stop? If you take it to its end, is it: We want to name some roads and bridges and we’re going to pass a constitutional amendment to call I-76 Joe Schmoe’s Highway?”

The aftermath of 2020 election fraud lies

Pennsylvania’s Republicans aren’t the ones considering looking beyond simple legislation in their effort to change election laws.

In the wake of the 2020 election and its rash of unfounded claims of fraudulent voting and illegitimate results, many GOP-controlled legislatures — particularly in swing states — have moved to restrict the vote in some way.

But in states with Republican legislatures and Democratic governors, the process has been much more combative. In Michigan, for instance, Democratic Gov. Gretchen Whitmer said she would veto any Republican proposal that included voting restrictions, including a proposal to limit the use of ballot drop boxes. In response, GOP legislative leaders raised the possibility of invoking a rarely-used procedure: overriding a veto by collecting hundreds of thousands of signatures in favor of the bill.

In Pennsylvania, unfounded election fraud claims and top lawmakers’ willingness to entertain them led to months of hearings — none of which proved there was widespread fraud — and resulted in a sweeping bill that would overhaul many aspects of Pennsylvania elections.

It is that bill, not an amendment, that many top Republicans say is their preferred method for overhauling the commonwealth’s elections.

A number of its provisions are bipartisan: It would create in-person early voting in 2025 and give counties more time to count ballots ahead of Election Day, something county leaders have sought.

But Wolf and other Democrats maintain several of its other elements would disenfranchise voters: tighter deadlines for voter registration and absentee ballot applications, a new stipulation that poll watchers from both political parties observe ballot drop boxes, and a requirement that all voters present a form of ID (a state-issued drivers’ license or a range of other official documents would be accepted).

“The lawmakers behind this bill are the same ones who asked Congress to throw out PA votes and whose lies directly contributed to the Jan. 6 insurrection,” Wolf wrote on Twitter. “I will veto this bill if it reaches my desk in its current form.”

On the national level, in a pivot for Democrats, prominent party leaders brushed off concerns about mandatory voter ID last week as momentum built for a compromise bill that would secure other party priorities including automatic voter registration and 15 days of early voting.

The Republican lawmakers behind the constitutional amendment plan have their own connections to the misleading claims of fraud in the 2020 presidential election.

Mastriano was one of Pennsylvania’s loudest voices in favor of rejecting election results. He was at a Jan. 6 protest in Washington D.C. and appears to have been much closer to the day’s violence than he initially claimed. He also spent thousands of campaign dollars chartering buses to bring his political supporters and allies there.

Corman, the highest-ranking lawmaker in the chamber and a key player in quietly shepherding the voter ID amendment to Senate approval, has his own connections to baseless election fraud claims. He signed a letter that his caucus sent to Congress just before the Jan. 6 election certification, urging a delay until Pennsylvania’s vote could be further investigated.

Months later, sitting in his Harrisburg office as the amendment moved toward final Senate passage, he tried to distance himself from speculation about fraud without actually saying whether he believed there had been any in the 2020 election.

“Obviously you can’t have a democracy if people don’t believe in the integrity of the vote, and whether the last election was — you know, we can argue that forever and I’m not taking a side on that — my point is moving forward, we should put all the security in it,” he said.

Corman added, he believes that if a poll was taken, “you would get a percentage of people who didn’t believe the last election came off the way it should. And whether that’s accurate or not, having that large of a population not believe it is a problem.”

He and other Senate Republicans moved the proposed amendment through their chamber during Harrisburg’s busiest week, just ahead of the fiscal year’s end. Much of the public’s attention was on Grove’s bill, or on the looming state budget deadline.

The Senate’s amendment is much more targeted than Grove’s big election bill, concerning only the implementation of voter ID. But on that issue, it’s actually more restrictive. While the omnibus bill would allow several ID options beyond a state-issued driver’s license or ID card, the amendment would only permit “valid government-issued identification” or, if a voter isn’t casting a ballot in person, “proof” of that identification.

Corman notes, recent polls have appeared to show that voters are on the same page as Republicans when it comes to voter ID. Earlier this month, Franklin and Marshall College found that 74% of voters who answered a survey said they support photo identification at the polls.

“It’s very popular in Pennsylvania,” Corman said, acknowledging that Senators specifically crafted the amendment with the assumption that Wolf would veto other voter ID laws.

If both chambers agree to move the amendment and it makes it through all its legislative hurdles, the soonest it could go to voters for a referendum would be 2023.

House Republicans haven’t yet committed to taking it up. Grove, who chairs the committee it would have to pass through, said he wanted to wait and see what Wolf did with his omnibus bill. He didn’t rule the amendment out, though.

“We’re not there,” he told reporters last week.

‘An old play in a very old playbook’

This isn’t Pennsylvania’s first foray into voter ID. In 2012, with Republicans controlling the legislature and the governor’s chair, they passed a bill requiring voters to present a state-issued driver’s license or non-driver ID. It became known as one of the most restrictive voter ID laws in the country at the time. Then-House Majority Leader Mike Turzai (R-Allegheny) bragged at the time that the bill would secure a victory for GOP presidential candidate Mitt Romney.

The law wasn’t in effect long. After being used in a primary election, the Pennsylvania Supreme Court temporarily stopped its implementation ahead of the 2012 presidential vote, arguing the burdens it placed on voters could lead to disenfranchisement. In order to get a state ID, voters had to present a birth certificate, a social security card, and two forms of documentation of their current residency.

For Marc Stier, a longtime activist who directs the left-leaning Pennsylvania Budget and Policy Center, the entire conversation felt like déjà vu.

As in 2012, he said, “what it will be is something that could make it more difficult for some people to vote.”

Stier has a personal example: his mother-in-law, who died recently and had been living in a nursing home.

“She didn’t have an ID anymore. She stopped driving a number of years ago. She didn’t need a picture ID, so we didn’t get one,” he said. “She wouldn’t be able to vote if she had to have a voter ID, and there are lots of older people like that.”

Stier spoke from the Capitol steps, where a group rallied for an unrelated reason: pushing for lawmakers to put more of its federal pandemic relief money into education.

Kari Holmes, a reverend from Allentown who is involved with the interfaith group POWER, said the issues were intertwined.

“It’s an old play in a very old playbook,” she said. “We’re talking about civil rights — legislation that makes it so that people’s voices can be heard … [for Republicans to] then turn around and make it so that that can’t happen — it makes it unquestionably obvious what you’re doing.”