Sri Venkateswara Temple devotees and volunteers carry a deity back into the temple during Maha Kumbhabhishekam, a five-day Hindu rededication ceremony in Penn Hills, Pa., Sunday, June 27, 2021. Built in the 1970s, the Sri Venkateswara Temple is the oldest major Hindu temple in the country. Maha Kumbhabhishekams occur about every 12 years and involve ceremonies to reenergize the temple and its deities.

At landmark Hindu temple near Pittsburgh, a timely rite of rejuvenation 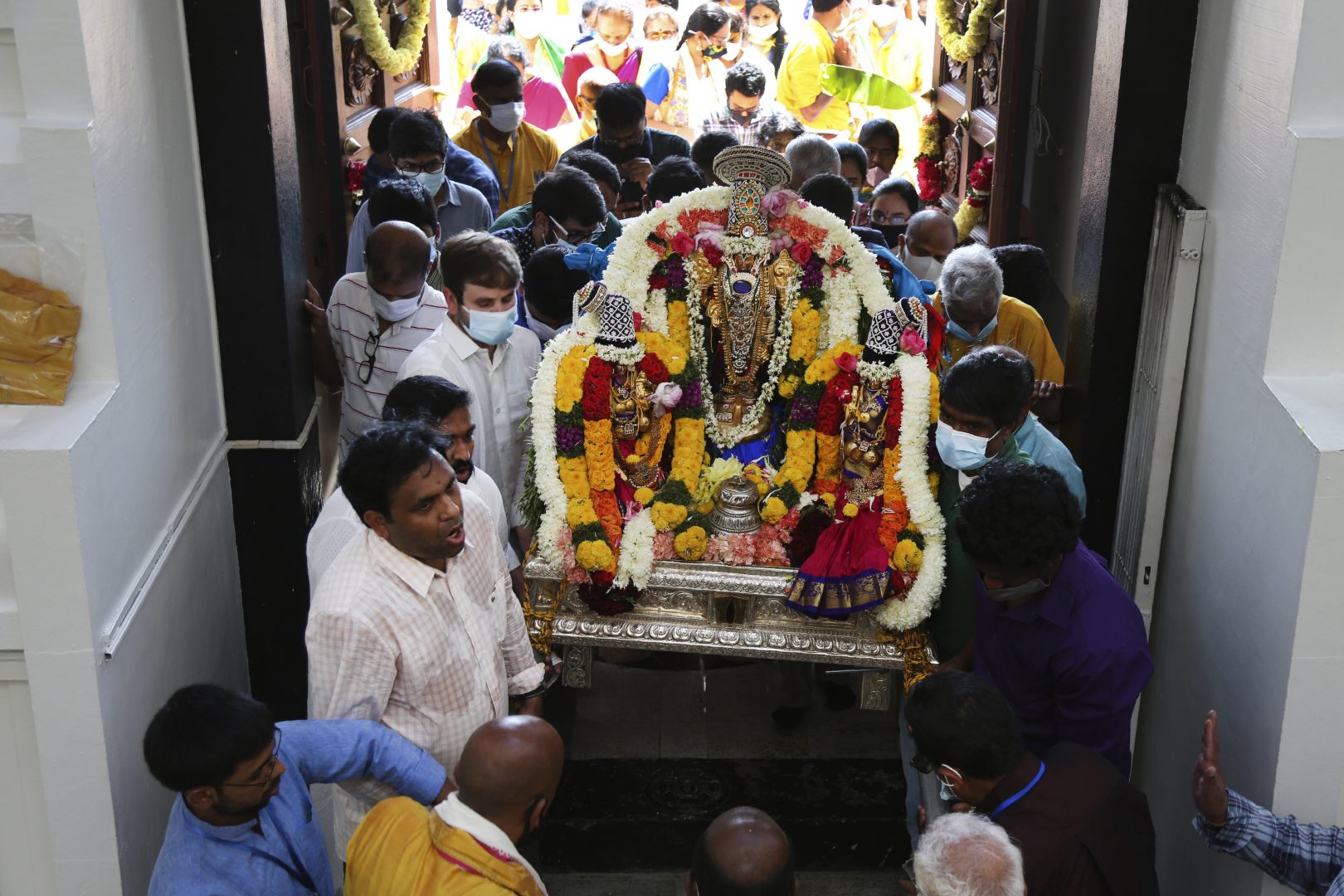 Sri Venkateswara Temple devotees and volunteers carry a deity back into the temple during Maha Kumbhabhishekam, a five-day Hindu rededication ceremony in Penn Hills, Pa., Sunday, June 27, 2021. Built in the 1970s, the Sri Venkateswara Temple is the oldest major Hindu temple in the country. Maha Kumbhabhishekams occur about every 12 years and involve ceremonies to reenergize the temple and its deities.

(Penn Hills) — When throngs gathered to rededicate the oldest major Hindu temple in the United States, there was poignance — prayers for continued recovery from the pandemic that struck many loved ones in India — and the elation of coming together after more than a year of restrictions.

And there was joy.

Shouts of the divine name “Govinda!” rose Sunday from the crowd of worshippers at the Sri Venkateswara Temple, atop a steep hill just east of Pittsburgh. Dressed in festive saris and other traditional clothing, they gazed up toward a gopuram — an ornamented temple tower whose white, newly restored facade gleamed brilliantly in the mid-day sun.

High above, priests stood on scaffolding and lifted ceremonial urns, pouring holy waters onto golden spires atop the gopuram.

They repeated the ritual on three smaller towers at the center of the temple. There were drumbeats and the horn-like fanfares of a nathaswaram, a traditional Indian reed instrument, and floral petals soon came wafting down on the devotees from a helicopter overhead.

Known as Maha Kumbhabhishekam, a reference to the sprinkling of holy water from ceremonial urns, the festival is traditionally held at Hindu temples once every 12 years to reharmonize and boost the spiritual energies of the temple and its deities. 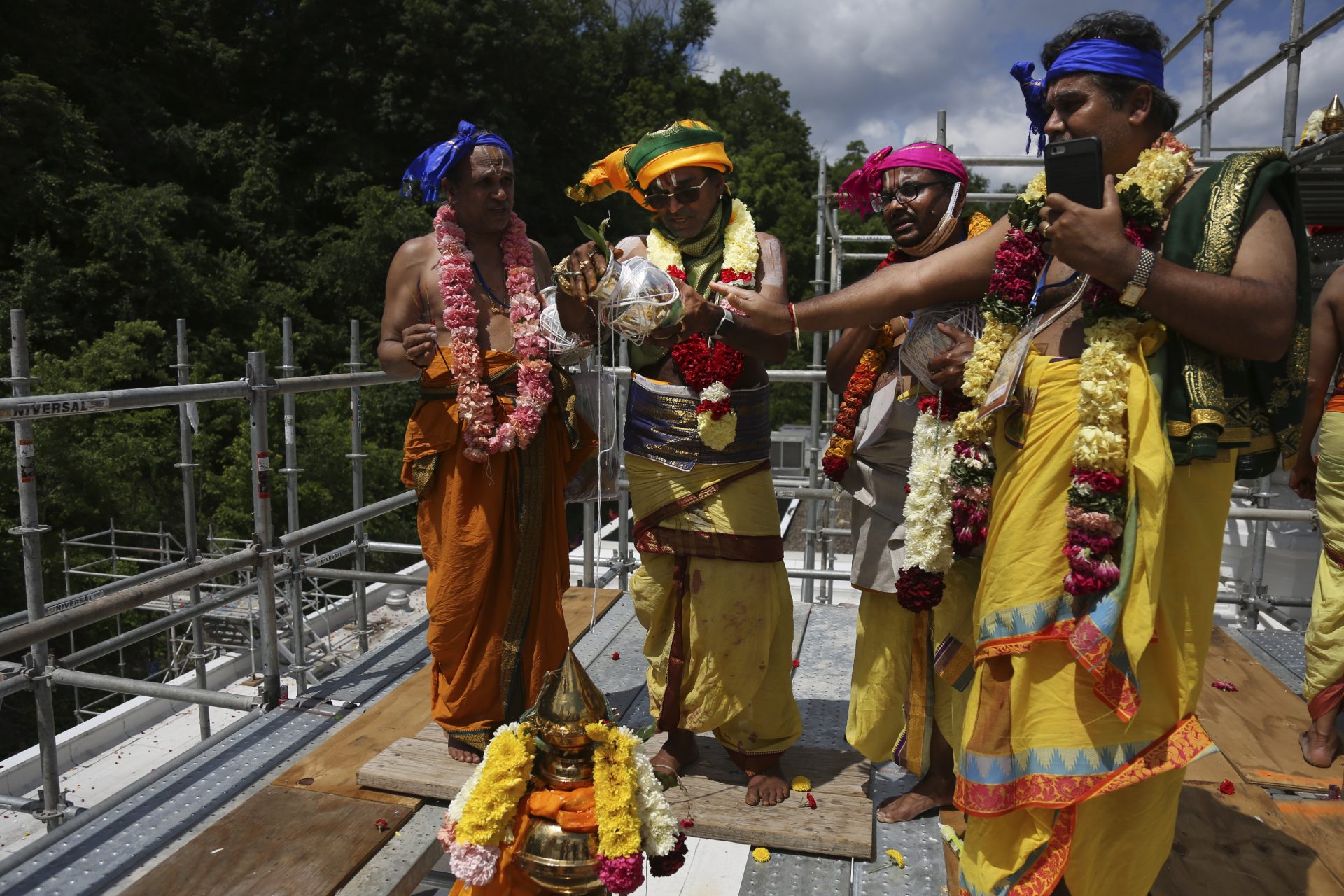 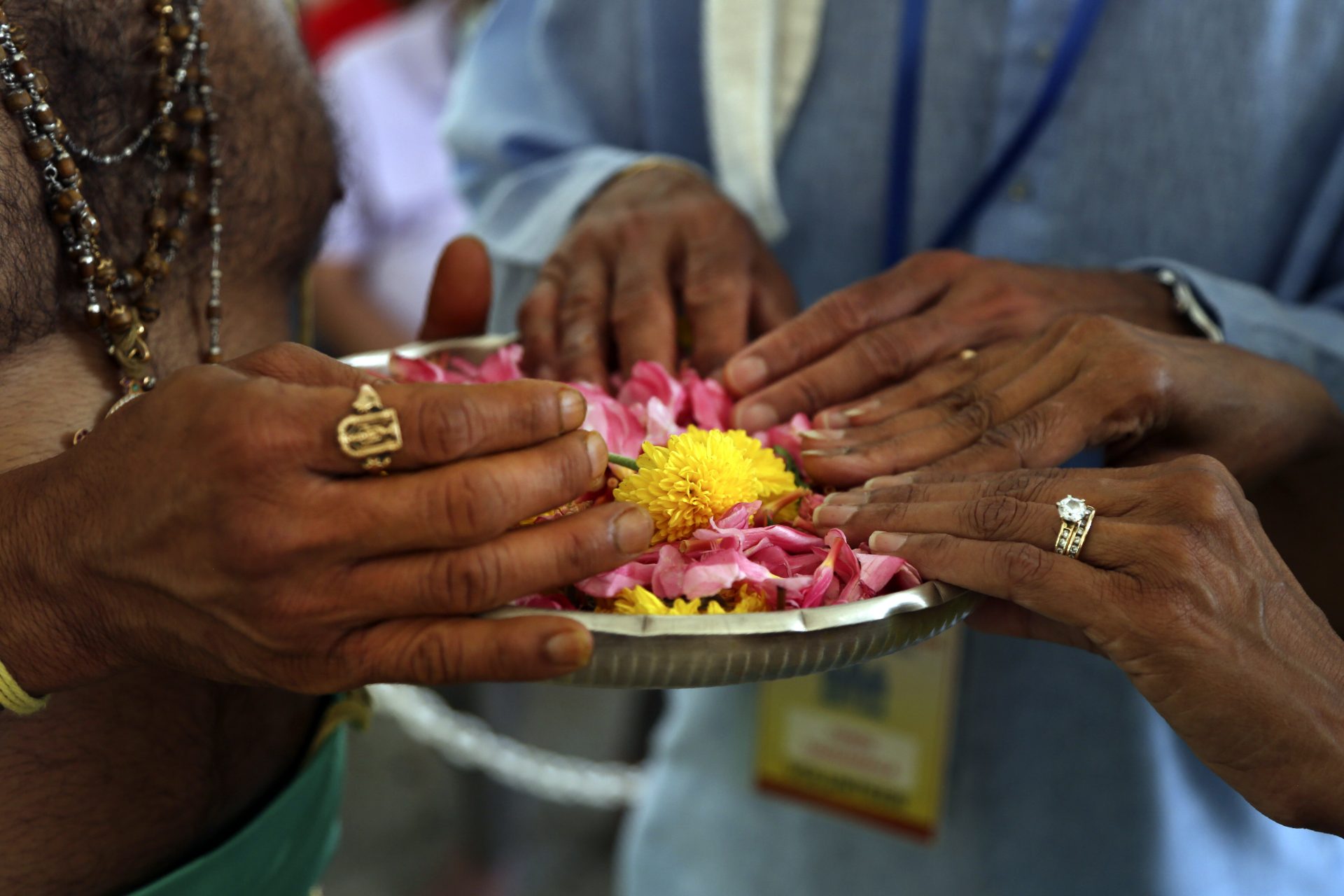 Hindu priest Gopala Dhattar, left, gives blessings to Pandu Tadikamalla, center, and his wife, Rama Tadikamalla, right, as they rest their hands on a bed of flower petals during the Maha Kumbhabhishekam, a five-day rededication ceremony at the Sri Venkateswara Temple in Penn Hills, Pa, Friday, June 25, 2021. Built in the 1970s, the Sri Venkateswara Temple is the oldest major Hindu temple in the country. Maha Kumbhabhishekams occur about every 12 years and involve ceremonies to reenergize the temple and its deities. 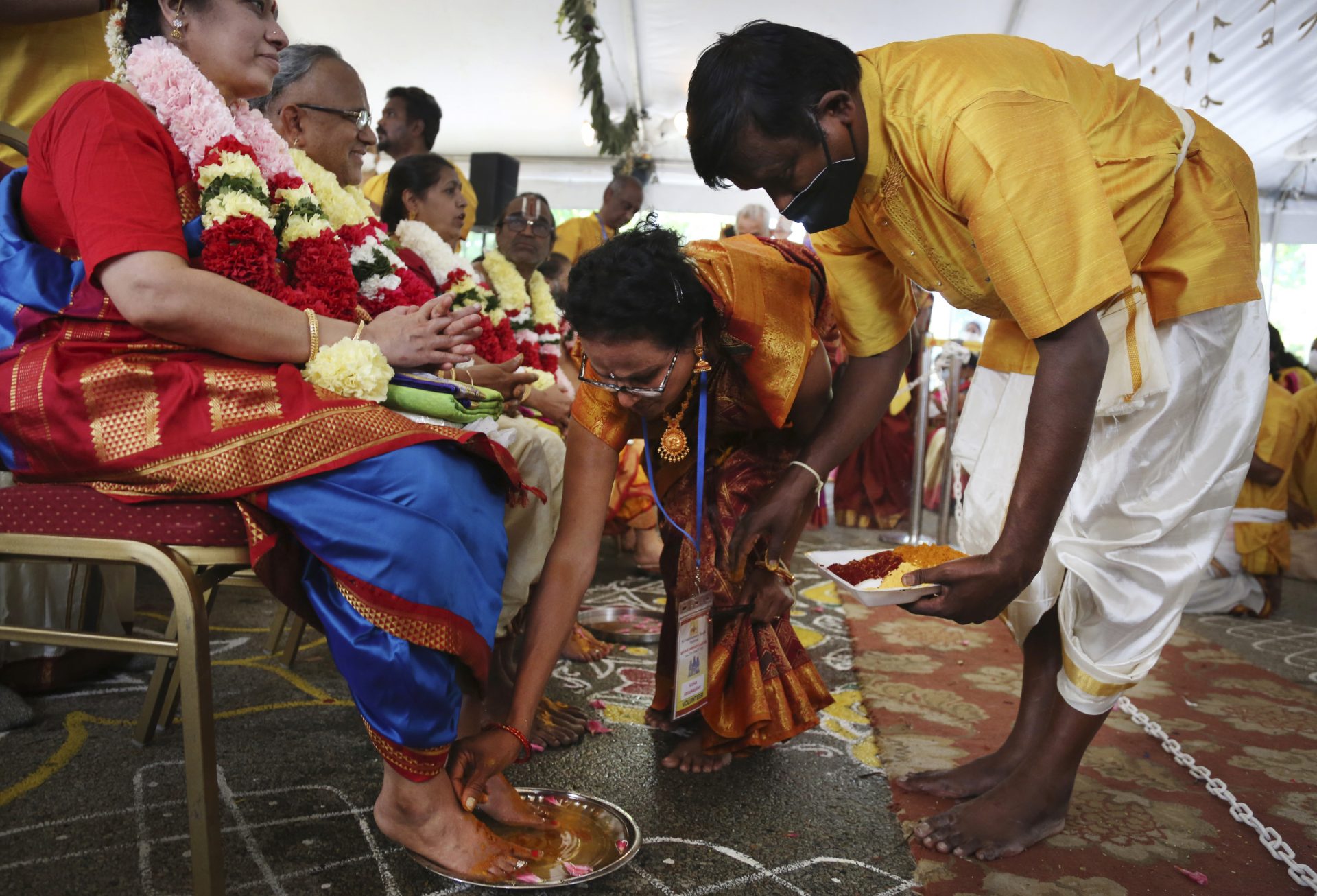 Several hundred devotees from surrounding states arrived throughout Sunday, culminating five days of prayers, chants and other rituals at outdoor fire altars. More than 20 priests took part, wearing yellow or saffron vestments around their waists; most were visiting from other North American temples.

The Sri Venkateswara Temple is much smaller than its massive prototype, a temple by the same name in the southern Indian city of Tirupati. Still, this Pittsburgh suburb has become a pilgrimage destination for Hindus throughout North America and a landmark in the growing landscape of Hinduism in America. There are now hundreds of temples across the country, and about 1 percent of American adults now identify as Hindu, according to a 2019 Pew Research Center report.

Kalathur Raghu, one of the temple’s founding members, recalled a much smaller ceremony on a chilly November day in 1976 to dedicate the new temple. “I think none of us expected to get to this level when we started,” he said.

The temple is dedicated to Venkateswara, considered an incarnation of Vishnu, a deity associated with protection and preservation who is also known by Govinda. The stone murti, or statue, of Venkateswara stands at the holiest spot in the temple. Images of other deities stand nearby, such as those of Lakshmi, goddess of prosperity, and Bhoodevi, goddess of the earth.

Devotees streamed into the temple Sunday afternoon to offer devotions to the deities at their newly rededicated shrines. There, priests chanted and bathed the statues in water, milk, honey and other traditional offerings, while devotees cupped their hands and received priests’ blessings.

A Maha Kumbhabhishekam has both practical and spiritual significance.

The ceremony is typically held every 12 years because it is believed that over time, the spiritual energies at a temple need to be ceremonially reharmonized. (In the earlier years of the Sri Venkateswara Temple, the intervals between ceremonies were longer than 12 years.)

On a practical level, the temple is temporarily deconsecrated in the weeks leading up to the ceremony, enabling repairs in areas normally off-limits to all but priests. At the Sri Venkateswara Temple, contractors renovated everything from ventilation to weather-worn ornamentation.

Volunteers also prepared for months. In days before the festival, women in saris wove garlands from thousands of mango leaves and carnations to decorate the tent and other festival areas.

“For one and a half years we were miserable” during the pandemic, said Nagamani Kasi, the temple’s joint treasurer. “We didn’t get to do anything. … This is like going back to normal and enjoying it. It’s good timing.”

The festival also included a large distribution of food to a nearby health center, which followed several other donations for pandemic relief locally and to India. 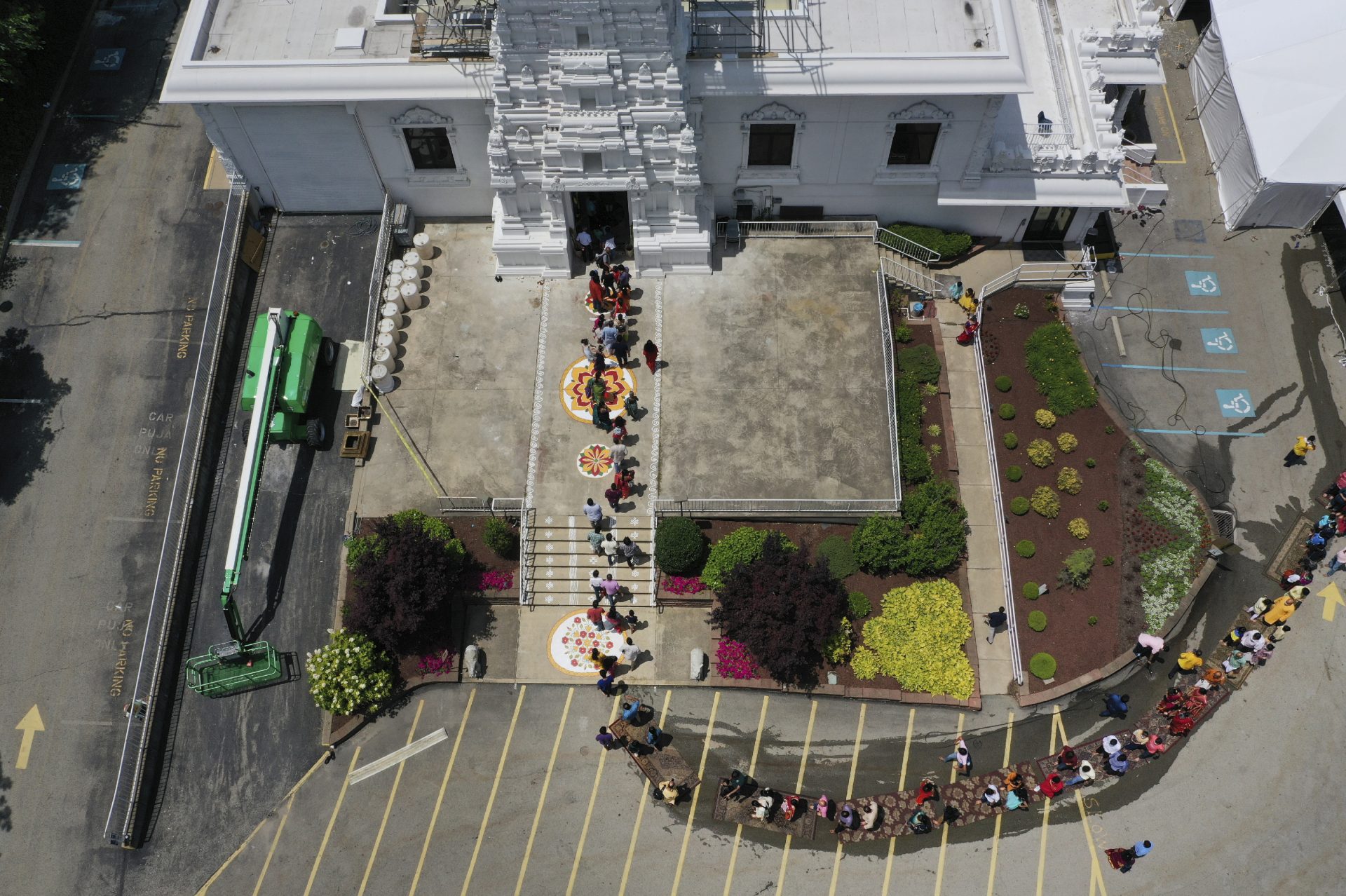 Devotees line up to enter the Sri Venkateswara Temple following the final rituals of Maha Kumbhabhishekam, the Hindu rededication ceremony in Penn Hills, Pa., Sunday, June 27, 2021. Built in the 1970s, Built in the 1970s, the Sri Venkateswara Temple is the oldest major Hindu temple in the country. Maha Kumbhabhishekams occur about every 12 years and involve ceremonies to reenergize the temple and its deities.

The ceremonies began officially last Wednesday in a tent in the temple parking lot.

Priests took turns chanting from the Vedas, four ancient scriptural texts, and tending to sacred fires at seven altars. Smaller idols of Venkateswara and other deities stood in front.

The scent of incense and woodsmoke mingled with the humid summer air as the amplified voices of the priests rang out for hours each day. The priests chanted at times in unison, at other times in a call-and-response led by the clarion voice of Sri Venkateswara Temple head priest Samudrala Venkatacharyulu.

At various points, priests led devotees in processions around the tent.

The prayers are not just on behalf of the devotees but that the “whole universe be healthy and happy” and that the coronavirus “go away soon,” said Venkatacharyulu. He arrived here in 1982 at age 21 from the mother temple in India for a two-year assignment, which has stretched to nearly 40 and counting, in what he calls the “America Tirupati.”

Hinduism historically had a tiny following in the United States, but its American profile grew following a 1965 congressional act that opened the doors to more immigrants from Asia and elsewhere.

Pittsburgh drew Indian immigrants to engineering, medical and educational careers, and the Hindu community began to coalesce by the early 1970s, when a small group of children met in a theater basement to study classical Indian dance. “We would go and do a little prayer and then start the dance class,” recalled the instructor, Mani Manoharan.

Community leaders concluded “we have to have a temple” and mobilized funds and other volunteer efforts, recalled Raghu. The Sri Venkateswara Temple in Tirupati contributed funds and sent craftsmen and priests to help.

The Pittsburgh region’s Indian population was “not a large community at that time,” Raghu said, “but we had the passion.”

Associated Press religion coverage receives support from the Lilly Endowment through The Conversation U.S. The AP is solely responsible for this content.