In this 2014 photo, people march in the annual Pride Day Parade in Philadelphia.

(Philadelphia) — The organization that has put on the Philadelphia Pride March and Festival for the last 28 years appears to have dissolved itself, and this year’s parade — which had been pushed to September as a “Lite” event with COVID-19 pandemic precautions — has been canceled.

The Philly Pride Presents website homepage is still active, but most of its other pages have been deleted, and the organization’s social media presence has been removed.

Philly Pride Presents attracted criticism from within the LGBTQ community a few weeks over a Facebook post about the historic 1969 Stonewall Riots that were described as people “dressed in women’s clothing” attacking police officers with bricks, saying “Ten police officers – including two police women – barricaded themselves.”

“Philly Presents made it seem like the police were under attack from people participating in civil disobedience,” said activist Abdul-Aliy Muhammad, co-founder of the Black and Brown Workers Cooperative. “It also referred to trans people, more specifically trans women, as ‘Those dressed as women,’ which is a highly transphobic comment to make.” 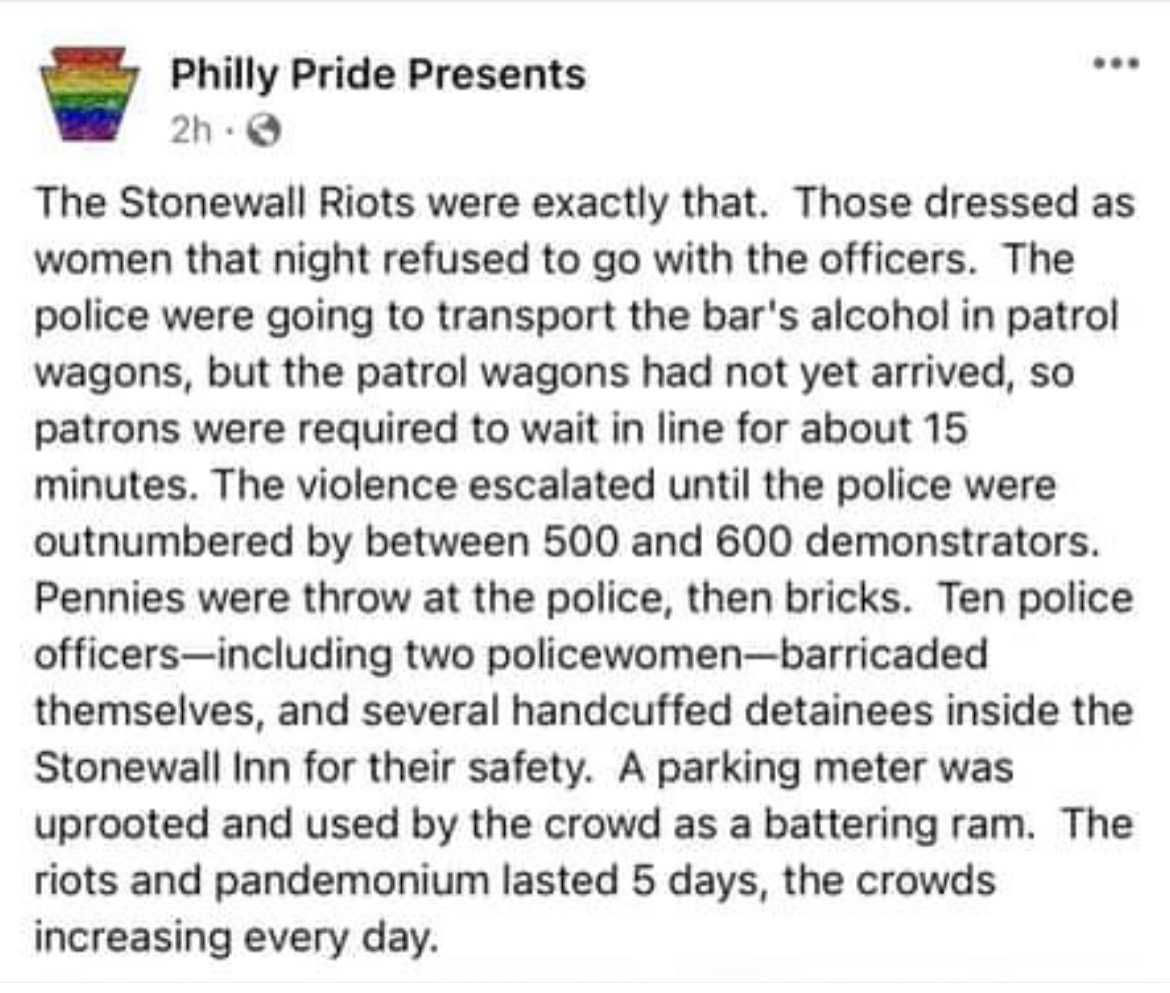 That post, coupled with another post on Memorial Day that depicted a version of the Blue Lives Matter flag, replacing the blue stripe with a rainbow stripe, caused an outcry from many in the LGBTQ community who have complained that Philly Pride Presents cozies up to police. Many in the LGBTQ community feel — both in 1969 and now — that police have been, and still are, actively harmful to them. 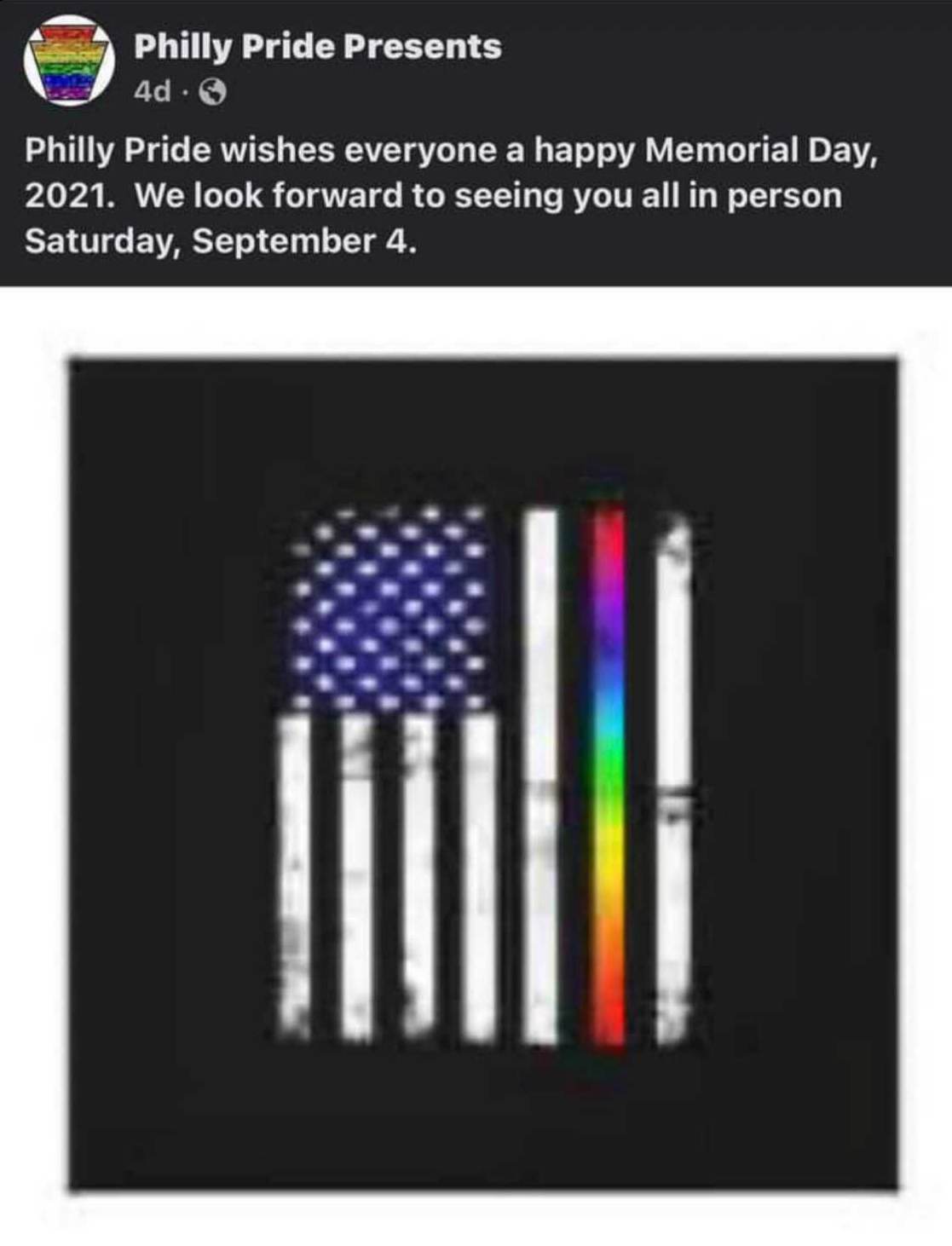 In the past, Philly Pride Presents had approached the Greater Philadelphia Gay Officer Action League (GOAL) to receive the Grand Marshal Award of the 2016 parade. After a public outcry from the LGBTQ community, GOAL ultimately declined the award.

Now, without warning or explanation, Philly Pride Presents not only pulled the plug on the planned 2021 parade, but on the entire organization.

The longtime executive director of Philly Pride Presents, Franny Dicicco, aka Fran Price, has run the parade for 28 years. Price is currently running for mayor of Folcroft, the borough near Philadelphia International Airport. She declined to comment in an email exchange through her campaign site.

Muhammad said the self-dissolution of Pride Presents is shameful.

“You can’t tell me that you held an organization for 28 years, and you don’t have enough compassion or concern for the community that you would respond transparently to our concerns,” they said. “When that didn’t happen, I think people felt, like, ‘Wow, are these the gatekeepers that we need or want in this role, who are not responsive?’”

ACT UP Philly, an AIDS/HIV activist organization, stopped officially participating in the Pride Parade years ago, according to member Jose de Marco, because the organizers did not reflect the experiences of Black and Latino people, and stopped highlighting the impact of AIDS.

“Black and Latinx folks … we’re an afterthought if we’re considered at all,” said de Marco. “So we actually made a conscious decision to not march in their parades anymore.”

Before the cancellation of the Pride Parade, ACT UP Philly had planned an anti-Pride Presents action for this Friday, along with other activist groups like Disrupt Philly and Philly Trans March, called Take Back Pride.

That protest action will likely not happen this week, because the dissolution of Pride Presents has made it moot. De Marco said he would like to get together with people from other LGBTQ activist groups — like Muhammad — to see if an alternative Pride event can be organized.

The executive director of the city’s Office of  LGBT Affairs, Celena Morrison, said she is involved in similar talks.

“Our Office of LGBT Affairs has been in conversation with community leaders and activists as they prepare to reimagine Pride,” wrote Morrison in a statement. “We look forward to supporting the many celebrations, rallies, protests, and programming already happening across the city, as the future of Pride in Philadelphia emerges.”