Protesters with the Black Lives Matter march down Pine Street on Juneteenth in West Philly.

On the federal level, the bill that made Juneteenth a federal holiday has been one of the only major racial justice-related measures to become law. 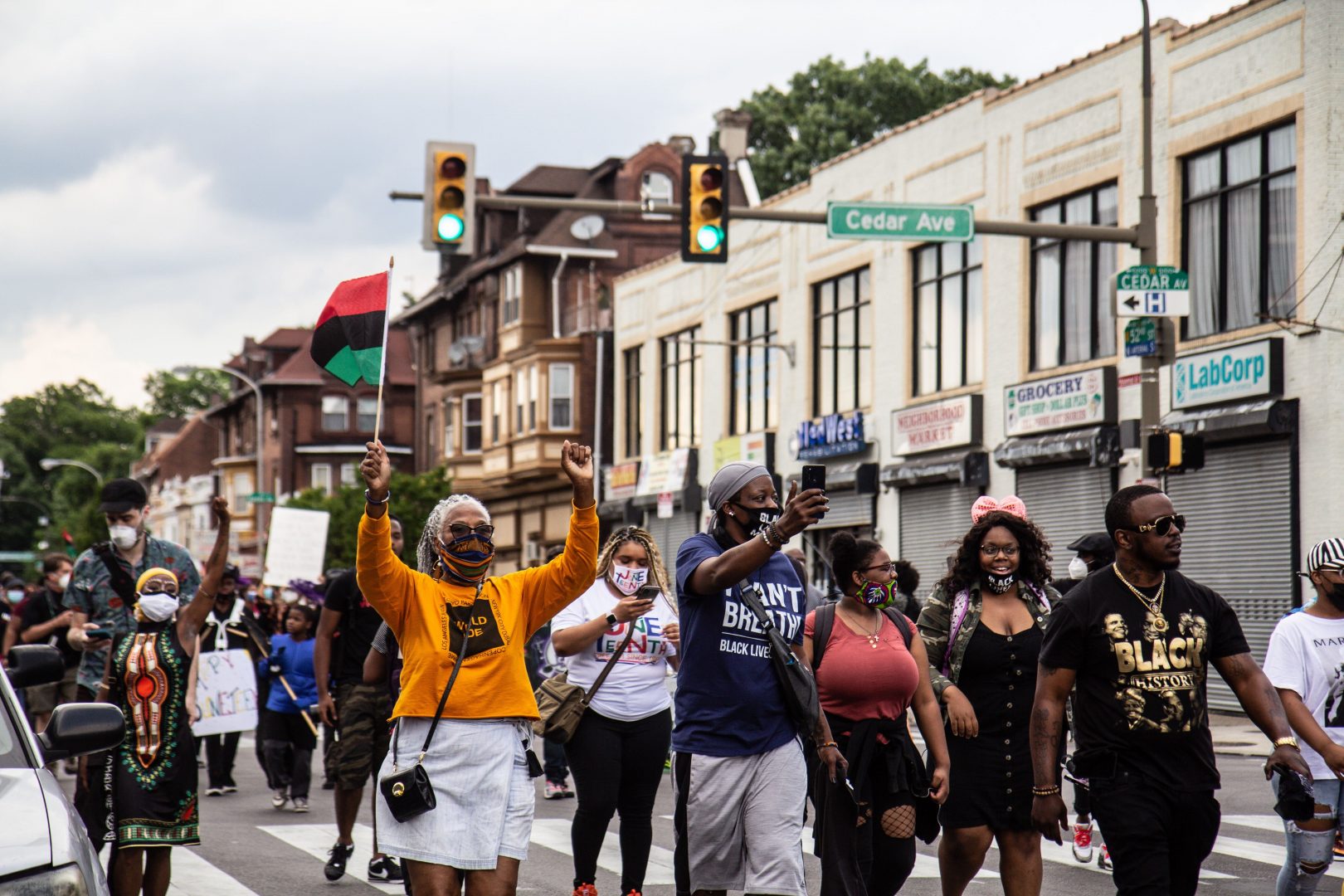 Protesters with the Black Lives Matter march down Pine Street on Juneteenth in West Philly.

(Philadelphia) — Saturday morning, Leon Sullivan and Daryl Hicks put on the purple and gold shirts of their fraternity, Omega Psi Phi, and made their way to Haverford Ave. in West Philadelphia for a Juneteenth march.

They were in good company. Dozens of other Omega brothers, a drum line of West Philly kids, a contingent of robed Black Israelites, a who’s who of local politicians and community leaders, and a lot of people from the neighborhood also turned out to march. Juneteenth had been signed into law as a federal holiday by President Joe Biden just two days before, and the crowd was ready to honor it.

But, Sullivan said, he didn’t want to celebrate too much, because there’s a lot of work left to do. He thinks that work needs to start with police reform.

“Everyone should be held accountable for their crimes, including law enforcement,” he said.

That’s a sentiment shared by many of the activists, politicians, and local leaders who have ramped up efforts to address institutional racism in the wake of the police killing of George Floyd last year.

A new federal holiday is nice, they say, but it’s no substitute for policy change.

An older Omega brother, who introduced himself as Omega O, elaborated on some of the brothers’ complicated feelings about Juneteenth. He likes that “mainstream America now gets a chance to understand what we’re celebrating,” but hopes people in power don’t take it to mean they’ve done enough.

He referenced racial massacres that destroyed Black communities in Wilmington, North Carolina in 1898 and in Tulsa, Oklahoma in 1921 that have largely been left out of school curricula. “Those things can’t just be swept under the rug and forgotten about … And there are people who are now benefiting from those atrocities. Now we need to turn the tide and let everybody benefit.” 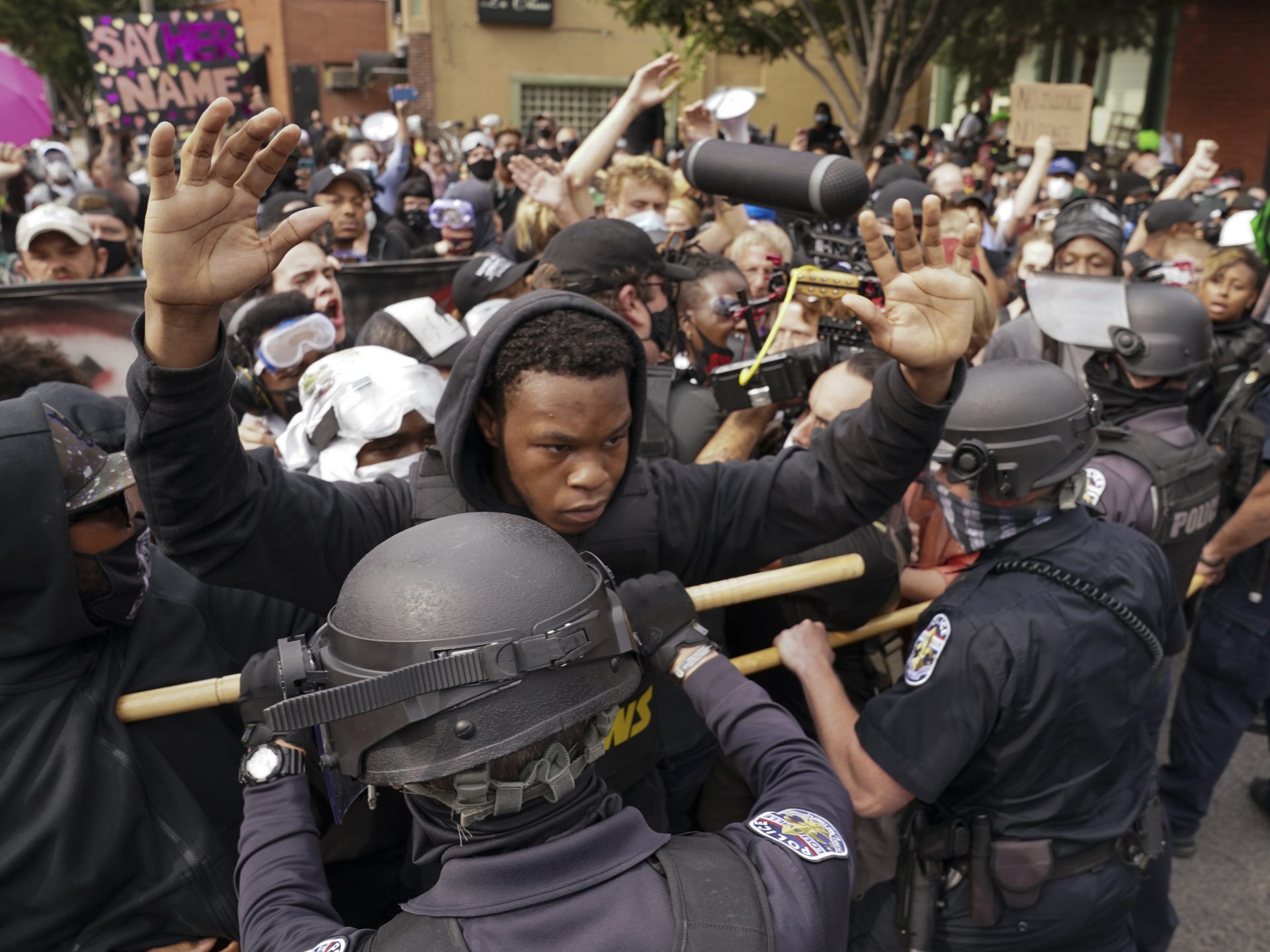 FILE PHOTO: Police and protesters converge during a demonstration Wednesday, Sept. 23, 2020, in Louisville, Ky., after a grand jury indicted one officer on criminal charges in the police shooting of Breonna Taylor.

On the federal level, the bill that made Juneteenth a federal holiday has been one of the only major racial justice-related measures to become law.

Other priorities, like the sweeping George Floyd Justice in Policing Act — which would create a national police misconduct registry and end qualified immunity for officers — have floundered.  So too has the Emmett Till Antilynching Act to make lynching a federal crime for the first time, an effort to form a reparations commission, and an initiative to route more money to historically Black colleges and universities, or HBCUs.

The George Floyd Act passed the Democrat-controlled House in March. It has backing from President Joe Biden and Vice President Kamala Harris, but doesn’t have enough GOP support to withstand a filibuster in the closely divided Senate. The same went for the antilynching bill, which got through the House but was blocked by Sen. Rand Paul (R-KY) in the Senate in the last legislative session.

The reparations commission bill is moving slowly through the House, and an attempt to increase HBCU funding is waiting for House action. Biden’s sweeping infrastructure plan, which is still being negotiated, may also increase funding for HBCUs.

Speaking at the Juneteenth celebration, West Philly Congressman Dwight Evans offered his neighbors and constituents the long view: Getting Juneteenth acknowledged as a holiday, he noted, is something that has taken “156 years of dedication from individuals such as yourselves.”

“The fact of the matter is, we do need the George Floyd [Justice in Policing] Act, we do need economic development, we do need education,” he continued. “But this is the beginning … this is a bridge.”

At the state level in Pennsylvania, there has been more progress.

The biggest step came soon after George Floyd was killed. Democrats in the House briefly staged a takeover of the rostrum in their chamber and, with a critical mass of public support, were able to pass two bills with bipartisan support in both GOP-controlled chambers despite the fact that Harrisburg Republicans have often opposed aggressive policing reforms.

One was a sweeping measure that created a confidential statewide database of police personnel files, which departments can now use to screen for past misconduct while hiring. The other required officers to get PTSD screenings and trainings on how to spot child abuse, recognize bias, and use force on suspects in less harmful ways.

Chris Rabb (D-Philadelphia) was a key architect behind the statewide database. Sitting in his office in Harrisburg a few days after Juneteenth, he says he’s still proud of the work state lawmakers were able to do in the past year, and he’s especially proud of the Legislative Black Caucus, of which he’s a member. But there’s a long list of other priorities he and others now have their eyes on — both related to police reform, and reaching far beyond it: 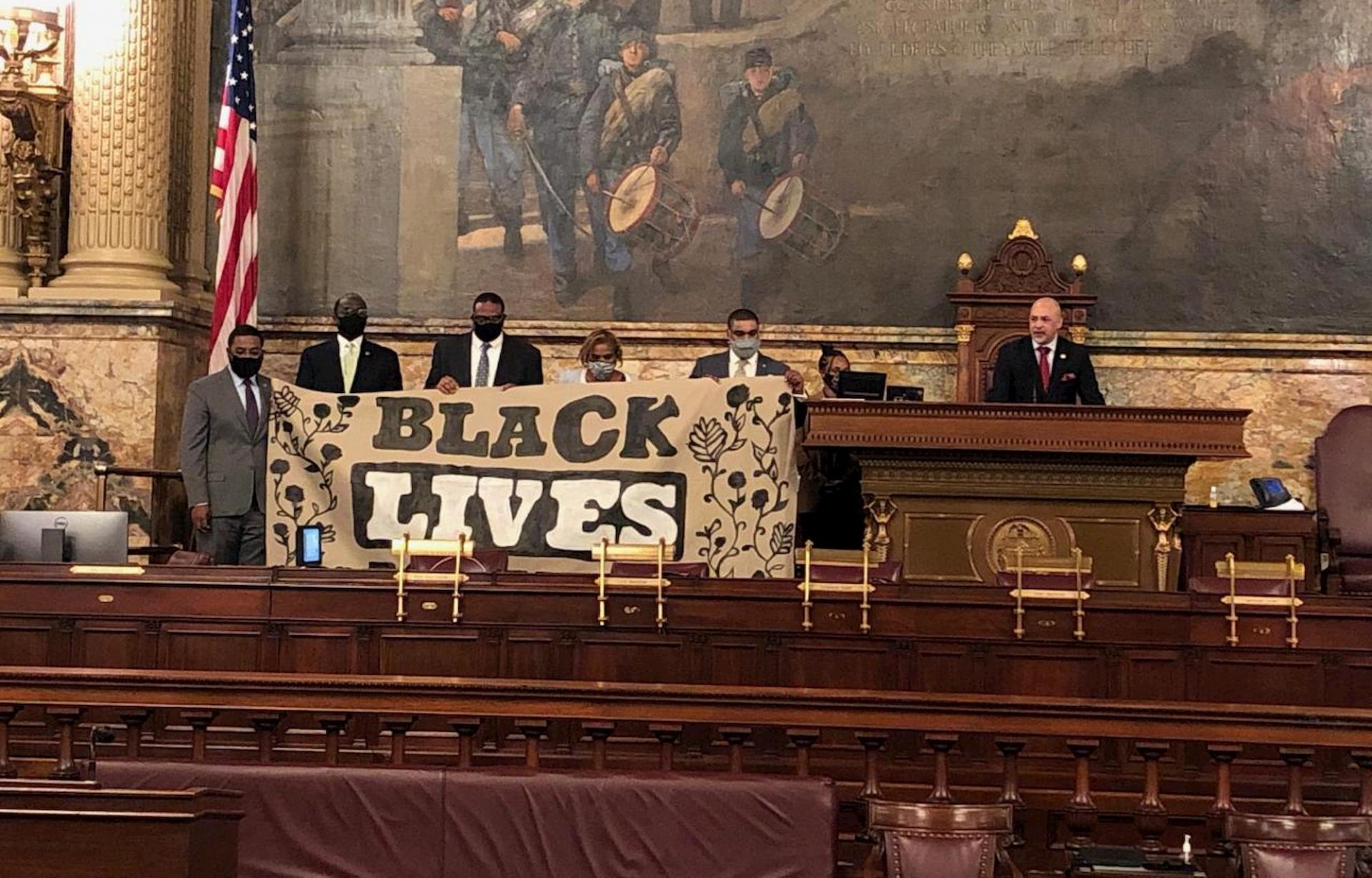 FILE PHOTO: Five Pa. House Democrats hold a Black Lives Matter protest while state Rep. Christopher Rabb (D-Philadelphia) delivers remarks from the Speaker’s rostrum on Monday, June 8, 2020. Black lawmakers prevented the regular session from beginning as scheduled in order to protest the killing of George Floyd and to call on the GOP majority to take up a slate of police reform bills.

Among them are efforts to change arbitration processes to make it easier to fire police officers with histories of misconduct, ban police from using chokeholds and limit other uses of deadly force, support small Black-owned businesses, increase funding for education by fully routing public school money through the state’s fair funding formula (which gives struggling city schools more resources), overhaul the criminal justice system (like a sentencing law that automatically makes any life sentence life without parole), and abolish the death penalty.

Rabb says in his mind, there’s one big reason why a lot of these bills haven’t gotten traction.

“Many of my colleagues do not either understand what systemic racism is or do not believe that it exists,” he said.

Donna Bullock (D-Philadelphia), who chairs the Black Caucus and has helmed many behind-the-scenes conversations about reform, has been especially focused on the police union arbitration processes, which have historically made it very difficult to fire police officers.

The issue is especially sticky, she notes, because it involves both criminal justice and labor: GOP lawmakers are often willing to lend necessary support to an arbitration overhaul if the measure also includes other provisions that could weaken unions’ bargaining positions — anathema to many Democrats.

“This was a bill that was promoted mostly by Republican colleagues [in the past],” Bullock said. “There seems to have been a shift as there’s been interest from a lot of our cities … I hope that we can bring more Republicans back on board.”

Rabb is also hoping to work with his GOP colleagues, and notes he has worked closely on an anti-death-penalty bill with Rep. Frank Ryan (R-Lebanon). But he’s less optimistic about building consensus on tough issues related to structural racism.

Juneteenth, he said, is a good example of a symbolically important legislative action that doesn’t address fundamental issues. Pennsylvania passed its own resolution recognizing the day as a holiday — as most states have done — a few years ago. It was introduced by a Republican.

“Nothing from the voting record of the person who introduced Juneteenth is reflective of the importance of Juneteenth, which is understanding that there is a certain level of government accountability associated with slavery and the aftereffects thereof,” he said.

If GOP lawmakers truly want to honor Juneteenth, he argued, they should support “full and fair funding of public education, where Black folk are disproportionately represented in the most inequitably funded districts across the Commonwealth,” as well as “criminal justice reform and decarceration.”

Though there has been some GOP support for criminal justice reform — a measure to wipe low-level offenses from people’s records passed with bipartisan support several years ago — there is typically a gulf between the parties on issues involving government spending and more fundamental overhauls to the justice system.

In West Philly’s Juneteenth celebration, as the crowd made its way from Haverford Ave. to Malcolm X Park, where a daylong festival was being held, versions of this conversation were common.

Asked what it meant that Juneteenth was now a holiday, Hannah Smith, a woman who drove from New Jersey to march with her three sons under age 8, said that like Rabb, Bullock, Evans and the others, she thinks a federal holiday is “a starting place.”

But that starting place means a lot to her, and it’s why she wanted to be at the march. Her boys are little now, but soon they’ll be Black men.

“They may not remember this day,” she said. “But in the next couple of years, as we go to these every year, they’ll know what it is. When they’re 10 and 12, maybe there will be a whole different kind of participation.”