“The fact that we haven’t gotten this bill done is what so frustrates people about politics,” Rep. Malcolm Kenyatta (D., Philadelphia), one of three openly LGBTQ people serving in the legislature, said Tuesday on the steps of the Capitol.

Similar legislation has failed to move out of Republican-controlled committees, and it's unclear if this year will be any different.

Joined by Democratic lawmakers on the steps of the Capitol, Wolf on Tuesday said the legislation, dubbed the Fairness Act, is “long overdue.”

“I gotta say, as a native Pennsylvanian, it remains an embarrassment for Pennsylvania that we stand out among our neighboring states for failing to provide basic civil rights protections,” he said.

The bill would add sex, sexual orientation, and gender identity or expression to the provisions of state law that prohibit housing, employment, education, and public accommodations discrimination. It was introduced this week by Rep. Dan Frankel (D., Allegheny), who has unsuccessfully pushed similar legislation for two decades.

“The fact that we haven’t gotten this bill done is what so frustrates people about politics,” said Rep. Malcolm Kenyatta (D., Philadelphia), one of three openly LGBTQ people serving in the legislature.

Pennsylvania is the only state in the northeast that lacks codified anti-discrimination protections based on sexual orientation or gender identity, though LGBTQ Pennsylvanians can file a complaint with a state commission. Frankel’s bills are usually referred to the House State Government Committee, where past chairs have declined to bring the measures up for a vote.

“We have many other issues in State Government to deal with and we’ll have to see where this ranks with those other issues,” former Rep. Garth Everett (R., Lycoming) told Spotlight PA last June, shortly after the U.S. Supreme Court extended federal civil rights protections against workplace discrimination to people based on sexual orientation and gender identity.

The office of Rep. Seth Grove (R. York), who now chairs the State Government Committee, did not respond to a request for comment Tuesday.

Jason Gottesman, a spokesperson for House Majority Leader Kerry Benninghoff (R., Centre), said, like all legislation, the Fairness Act would need to win committee support before moving to the full chamber.

“It seems inconsistent and intellectually dishonest that Democrats today, including the governor, advocated for rigorous legislative engagement on this issue when they have been missing in action in doing the same thing for legislation being advanced by the Republican majority,” he said.

As of Tuesday, there were two Republican co-sponsors of the House legislation: Todd Stephens of Montgomery County and Wendi Thomas of Bucks County.

Ciora Thomas — co-vice chair of the state’s Commission on LGBTQ Affairs and founder of SisTers PGH, a nonprofit that serves trans people — said lawmakers also need to ban conversion therapy and “gay or trans panic” defenses, as well as update the hate crimes statute to include sexual orientation and gender identity.

The latter change is backed by Philadelphia District Attorney Larry Krasner, who last year said he could not bring tougher charges against a woman accused of beating transgender activist Kendall Stephens.

“When discrimination is enshrined in our laws and policies, the state gives tacit permission to treat people who present differently as less than equally and fully human,” Krasner said at the time. 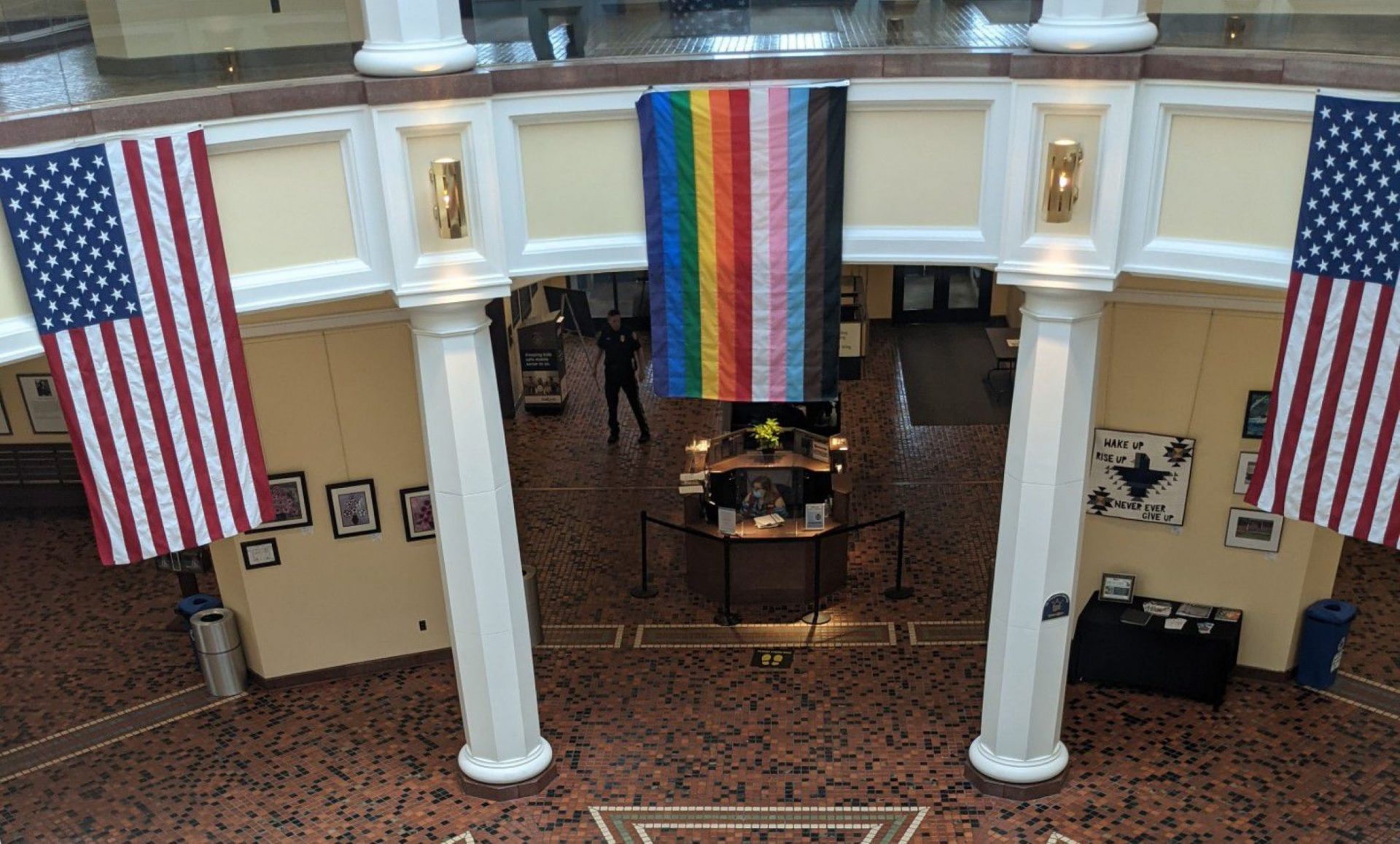 A Pride flag is currently hanging inside the Capitol’s East Wing Rotunda as part of a permitted display requested by the Commission on LGBTQ Affairs’ executive director.

‘The flag symbolizes us as a community’

Tuesday’s press conference outside the Capitol would have had a different backdrop last year.

Last June, Wolf ordered the Pride flag to be flown at the Capitol while Lt. Gov. John Fetterman regularly displayed the flag from his office balcony facing the steps after taking office.

This #PrideMonth, we celebrated a historic nondiscrimination Supreme Court ruling and solemnly reflected on the lives lost to violence against the LGBTQ+ community.

The Pride flag over our Capitol is a reminder to all of us that the fight for equality continues in PA. pic.twitter.com/Ddwn9nZ6Fb

The GOP-controlled legislature banned all but the U.S., Pennsylvania, and POW MIA flags from being flown on Capitol grounds as part of a larger budget bill signed by Wolf last year.

Fetterman, however, has continued to fly Pride flags, including one removed by the Department of General Services earlier this month.

“The flag symbolizes us as a community, and when you remove these flags, you are essentially saying that we as a community should remain invisible, remain forgotten, remain tossed aside and cast out,” Stephens, the Philadelphia activist, told Spotlight PA.

The fate of these flags was a concern to prominent Pittsburgh-based LGBTQ blogger Sue Kerr, who told Spotlight PA it would be “deeply disturbing if Pride flags are destroyed.”

In fact, the flags are in the custody of the state agency tasked with removing them from Fetterman’s office.

“We take the flags down and retain them in our possession,” Department of General Services spokesperson Troy Thompson said. “We’re not burning them or doing anything like that to them.”

A Pride flag is currently hanging inside the Capitol’s East Wing Rotunda as part of a permitted display requested by the Commission on LGBTQ Affairs’ executive director, according to Thompson.

State Rep. David Rowe (R., Snyder) responded last week by hanging pro-Second Amendment and “Don’t Tread on Me” flags nearby. Thompson said Rowe’s flags were removed by DGS and returned to him, as they violated a different part of state law that prohibits displays in portions of the Capitol’s interior.

“Wolf and Fetterman have been decorating the Capitol for months with flags to fit their agenda,” Rowe wrote on Facebook. “I figured I’d follow their example and decorate the East Wing with flags to fit my agenda…and my agenda is FREEDOM!”