The U.S. Capitol is seen under dark skies in Washington, Tuesday, June 8, 2021, as barriers remain six months after the Jan. 6 attack. A Senate report examining security failures surrounding the Jan. 6 insurrection at the U.S. Capitol blames missed intelligence, poor planning and multiple layers of bureaucracy for the deadly siege.

Ex-police chief and 5 others charged in Capitol riot conspiracy

They are accused of conspiring with one another in a plot to block the certification of President Joe Biden's victory.

(Washington) — A former California police chief and five other men have been indicted on conspiracy charges in the Jan. 6 attack on the U.S. Capitol, according to court documents made public Thursday.

Among those charged is a former La Habra police chief who founded a far-right group called the American Phoenix Project, which was formed to protest pandemic-related restrictions and has also helped pushed the lie that the election was stolen from former President Donald Trump. At least some of the men charged are believed to have ties to the Three Percenters antigovernment extremist movement, according to court documents.

They are accused of conspiring with one another in a plot to block the certification of President Joe Biden’s victory. The U.S. Department of Justice has brought similar conspiracy cases against members of other far-right extremist groups, the Oath Keepers and the Proud Boys, in its sweeping prosecution of the deadly Jan. 6 riot. 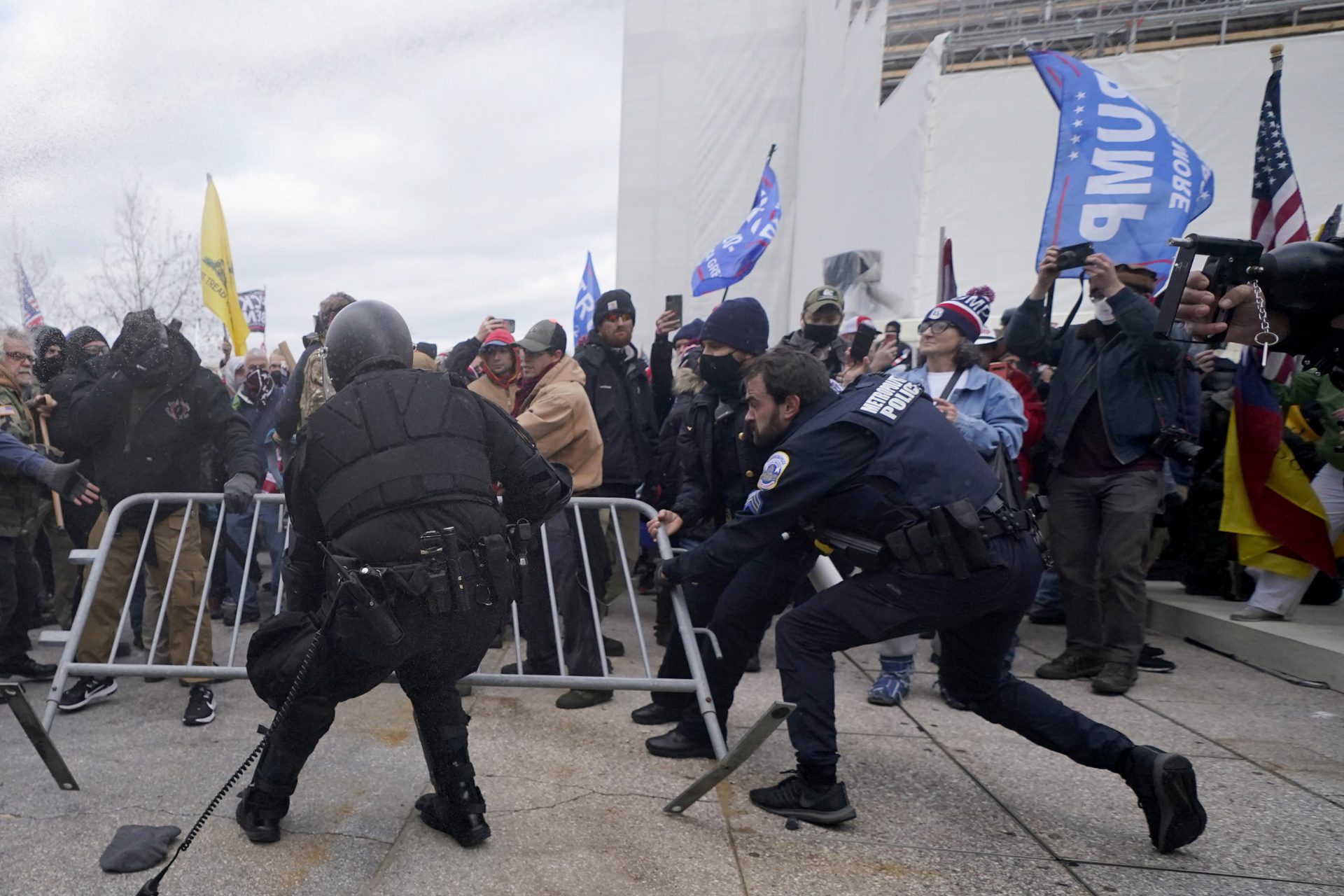 Police try to retrieve a barricade during a scuffle with President Donald Trump supporters at the U.S. Capitol, Wednesday, Jan. 6, 2021, in Washington. The incident happened as Congress prepared to affirm President-elect Joe Biden’s victory, with thousands of people gathered to show their support for President Donald Trump and his claims of election fraud.

In court documents, authorities describe how the American Phoenix Project founder, Alan Hostetter, used his group in the weeks leading up to Jan. 6 to advocate for violence against people who supported the results of the election. During a “Stop the Steal” rally held in Huntington Beach on Dec. 12, Hostetter warned that “Trump must be inaugurated on Jan. 20th.”

“And he must be allowed to finish this historic job of cleaning out the corruption in the cesspool known as Washington D.C. The enemies and traitors of America both foreign and domestics must be held accountable. And they will. There must be long prison terms, while execution is the just punishment for the ringleaders of this coup,” Hostetter said, according to the indictment.

Hostetter’s lawyer said he expected to have more information after an afternoon court appearance. He said Hostetter surrendered to authorities and he expected he would be released from custody.

“From what I can tell in the indictment, my client is not accused of committing any violence,” Essayli said. “He did not enter the actual Capitol building, so we’re very troubled with the nature and the extent of the charges that are brought.”

Authorities said that later in December, another defendant, Russell Taylor, posted in a Telegram chat in response to a question about when to be at the Capitol on Jan. 6, “I personally want to be on the front steps and be one of the first ones to breach the doors!”

On Jan. 1, the six men joined a Telegram chat called “The California Patriots-DC Brigade” along with more than 30 other people to coordinate ahead of the riot, authorities said. Taylor wrote that the chat was being used to “organize a group of fighters to have each other’s backs” and asked them to identify if they had any pervious law enforcement or military experience or “special skills relevant to our endeavors.”

Days before the riot, Hostetter warned in a post on the American Phoenix Project’s Instagram account that “things are going to come a head in the U.S. in the next several days.” 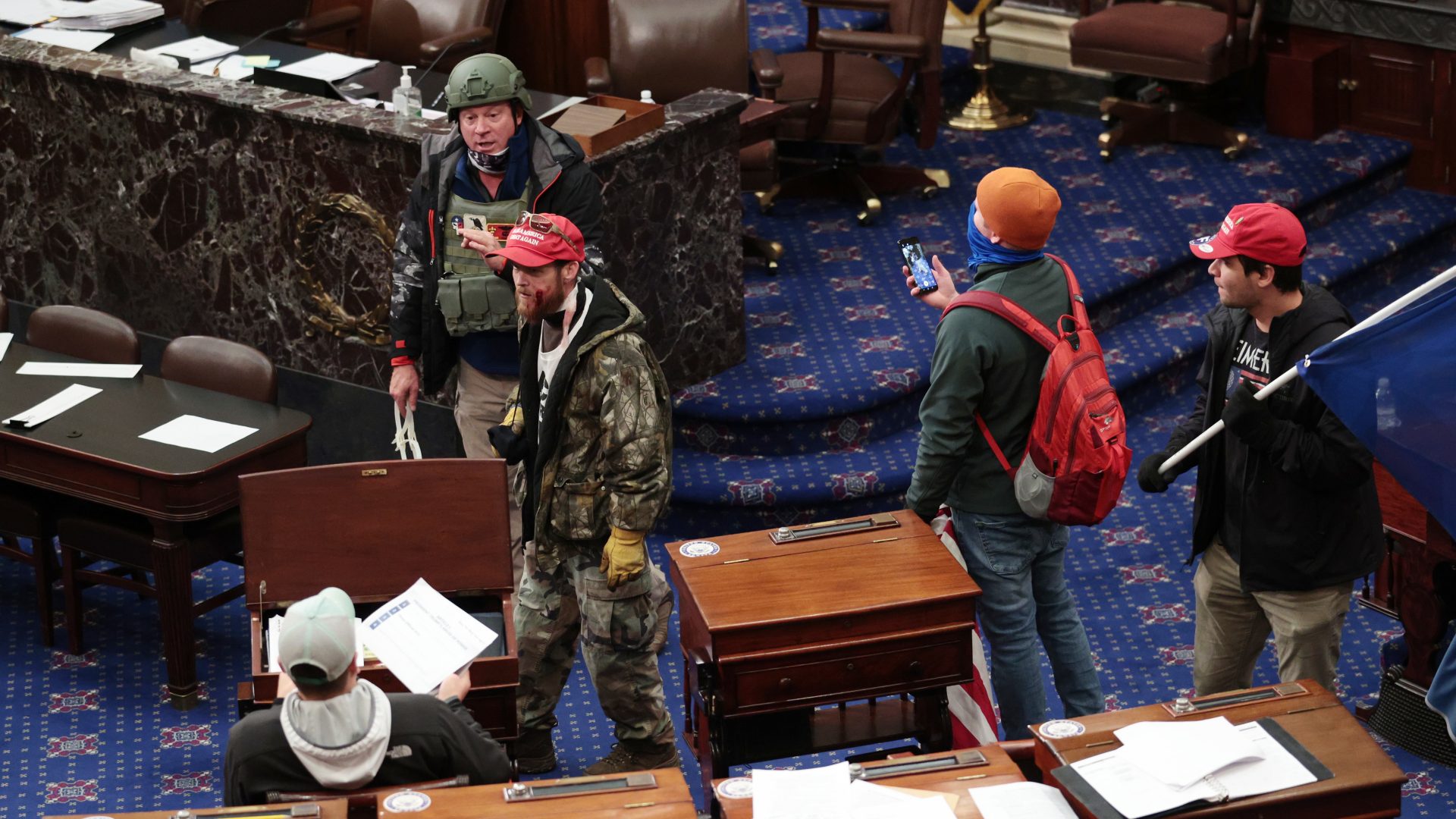 Larry Rendall Brock Jr., an Air Force veteran, is seen inside the Senate Chamber wearing a military-style helmet and tactical vest during the rioting at the U.S. Capitol. Federal prosecutors have alleged that in the months ahead of the attack, Brock posted on Facebook about an impending “Second Civil War.”

On Jan. 6, Taylor and Hostetter were part of the group trying to push through a line of officers on the West Terrace, authorities say. As they moved toward the building, Hostetter declared that “the people have taken back their house” while Taylor urged the rioters inside, authorities said.

Messages were left for the attorneys listed on the court’s website for three other defendants: Erik Scott Warner, Derek Kinnison and Ronald Mele. One of the lawyers, David Kaloyanides, said he did not believe he would be handling Kinnison’s case.

It was not immediately clear whether Taylor or another man, Felipe Antonio “Tony” Martinez, had attorneys or when they would have court appearances.

The controversial Arizona GOP-led election review is drawing Republicans from Pa., and other states