Six of 15 board members of embattled Pa. pension fund officially call for removal of its top command

Six trustees for Pennsylvania’s largest pension fund have called for the full 15-member board to vote Friday to fire the $64 billion chief executive and top investment officer, as the fund grapples with an FBI investigation and management mistakes.

On Thursday morning, the dissidents delivered a detailed letter sharply criticizing the leadership of PSERS Executive Director Glen Grell and Chief Investment Officer James H. Grossman Jr. Grell has led the fund for the last five years after serving 11 years as a Republican lawmaker in the state House of Representatives. Grossman, the highest-paid state employee, heads a 50-member unit overseeing the fund’s investment strategy, which is at the core of the complaints against him and Grell.

The letter, a copy of which was obtained by Spotlight PA and The Inquirer, was unchanged from the draft obtained Wednesday by the newsrooms. It mounts a detailed case against the leaders’ investments choices, blasting them as high-fee, poor-performing creations that serve the interests of venture capital and private equity.

It also portrays the 350-employee PSERS as a topsy-turvy agency, where the managers run roughshod over the board, cutting out the appointed and elected panel of educators and politicians from key decisions even as overall fund performance has lagged behind similar public funds.

The letter was signed by State Treasurer Stacy L. Garrity, a Republican, and went out on her letterhead. In a bipartisan twist, she was joined by a Democratic board member Joe Torsella, whom Democratic Gov. Tom Wolf put back on the PSERS board this year after Garrity defeated Torsella for treasurer last fall.

Two other board members tied to Wolf — Richard Vague, his banking secretary, and Noe Ortega, his acting education secretary — also signed. So did Nathan G. Mains, the leader of the state School Boards Association. 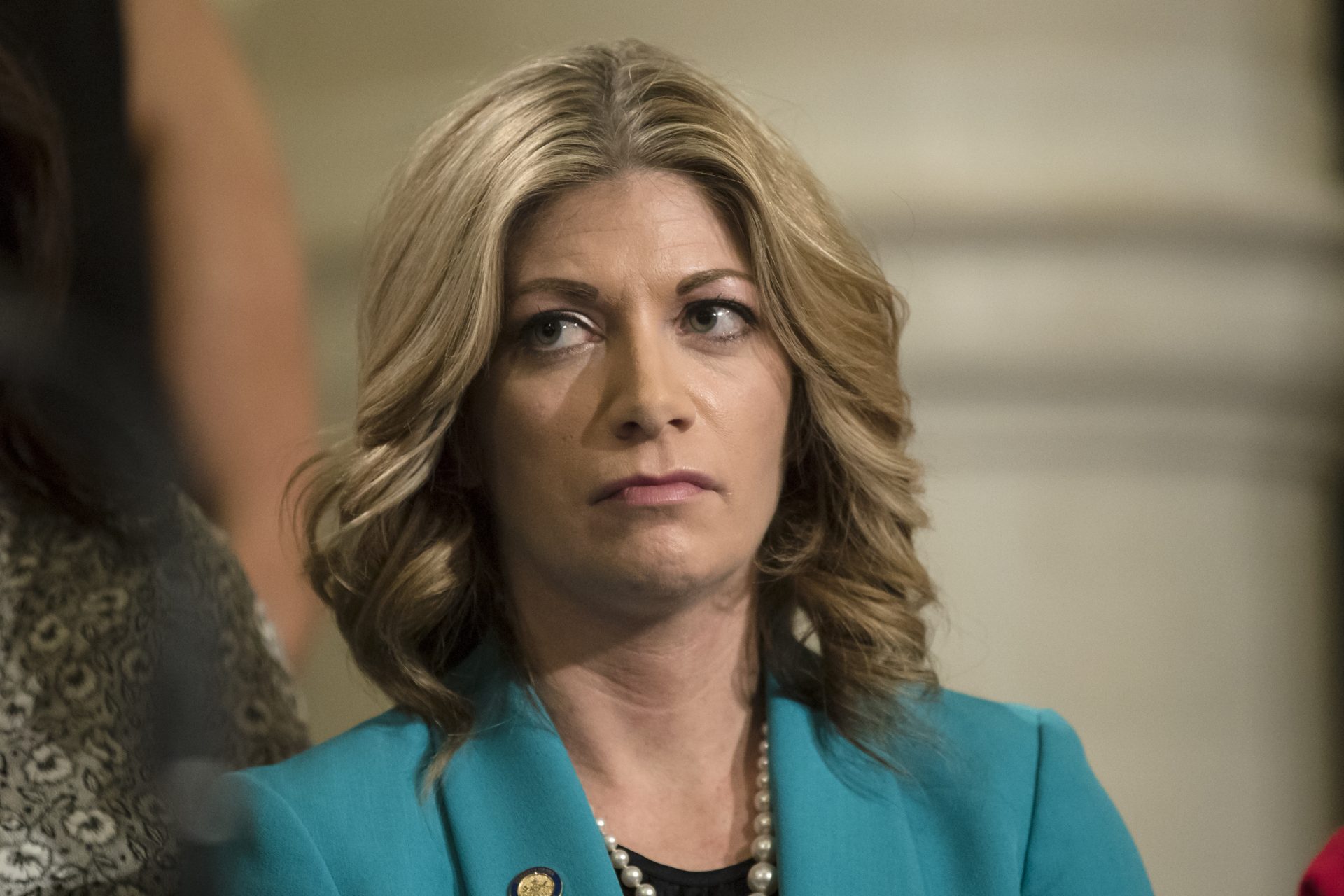 The group also included State Sen. Katie J. Muth (D., Montgomery) who quickly emerged as the board’s most outspoken critic after she joined it late last year as a representative of the State Senate Democrats. On Tuesday, she took the unusual step of suing the agency on whose board she sits, saying it had cut off her access to key fund documents.

The dissident bloc says the board should vote to show it has “no confidence” in Grell and Glenn, fire them and appoint an interim chief for investments. It noted that PSERS had recently hired a Seattle consultant, Verus Investment, for $810,000 to oversee Grossman’s work while the agency contends with the FBI probe.

Among the nine board members who refrained from signing are board chairman Christopher Santa Maria, a teacher and former union leader in the Lower Merion schools, and several other board members tied to the PSEA, the state’s biggest teachers union who have staunchly defended PSERS managers.

PSERS — the Public School Employees’ Retirement System — is one of the 25 largest pension systems in the nation. It sends $6 billion in retirement checks annually to 265,000 former teachers and other school staff.

Its annual finances hinge on about $5 billion from taxpayers, about $1 billion from working teachers, and about $4 billion on returns in investments. Despite its giant investment pool, it is still $40 billion short of what it needs to meet promises to future retirees. Current recipients have not had a cost-of-living increase in nearly 20 years while performance has lagged far behind comparable funds.

The board revolt has flared as the fund has been grappling with a federal criminal investigation by the FBI and the U.S. Attorney’s office in Philadelphia. Grand jury subpoenas have been sent to the fund and to top officials and were obtained by Spotlight PA and The Inquirer. Those documents state that authorities were investigating the fund’s $5 million appropriation to buy Harrisburg properties near its headquarters and the botched calculation of a figure for investment performance.

Critics have also pointed to the luxury worldwide business travel by its in-house investment experts as a sign that the agency is too cozy with big investors. And on Monday, the fund’s management disclosed that it had given the IRS and the public incorrect information about the role of investment staffers on PSERs-related nonprofits.

The dissidents, though, barely touch on the federal probe in their letter.

“PSERS’ investment underperformance over the past 10 years is beyond dispute, resulting in higher payroll deductions for nearly 100,000 public school employees,” the letter said. “Those who have dedicated their career to public education, people who are the heart and soul of this Commonwealth, deserve better.”

In preparing to move against Grell and Grossman, the dissidents also obtained a legal opinion from the Cozen O’Connor law firm stating that the board had an obligation to act if it thought managers were failing in their jobs.

“If board members do not take action, they may be subject to claims that they have breached their fiduciary duties,” according to the opinion, which was obtained by The Inquirer.

In one section, the dissidents’ letter portrays PSERS staff as essentially the bosses of the PSERS board. It said the staff provided key information to the board only at the last minute, took control of key decisions involving the hiring of staff and consultants, and talked trash about board dissidents to the media.

Later Thursday, the full board is to meet in Harrisburg for a previously scheduled session. At the meeting, as the letter notes with disapproval, Grell and Grossman are expected to unveil a request for the PSERS board to green-light nearly $1.2 billion in new investments.

This is the same approach that critics say has led to the lackluster performance of a fund crucial to 265,000 retired public school teachers.

The letter notes PSERS now has 63% of its money in so-called alternative investments, whose true value is hard to measure because they aren’t traded on public stock markets. This is more than double the “alternatives” bet made by other public pension plans as a group, it said.

If the plan had been more conventional and invested more in public stock and index funds, the letter says, PSERS would have spent much less and profited far more. By the critics’ math, it would have $81 billion to pay future pensions, not $64 billion, had the plan kept pace with the top group of public pension plans over the last decade.

In a mistake now under FBI scrutiny, the board in December endorsed what turned out to be an incorrect number for its performance returns. It did so after skeptical board members, led by Torsella, questioned managers’ math — and after the fund’s Grossman said: “We did our due diligence. We covered it. I’m not worried about it.”

In April, the board reversed course, abandoning the December number as a flawed calculation, and adopting a new one that fell slightly beneath a target. A state law links teachers’ payments into the fund to performance results.

So the miss on the target meant that 100,000 teachers and other staff hired since 2011 will have to pay $26 million more into the plan yearly, the letter says. This was the first time any PSERS official has put a price tag on the failure to meet the target, though the letter’s figure accords with an Inquirer estimate in March. PSERS management has yet to provide an estimate.

In letters obtained by Spotlight PA and the Inquirer, a fund consultant said one of its employees made a data-entry error that led to the miscalculation. Another consultant, hired to check the work of the first, said it missed the mistake because it was hired to make only limited checks, and skipped over the month with the critical errors.

The incorrect number was endorsed even after Torsella, while treasurer, had raised questions about how the management was computing investment results.

Sold on the promise of a college education, some former Milton Hershey School students ended up with debt, hardships