Two people hold signs at a rally in support of unemployed people in downtown Pittsburgh on Wednesday, March 10, 2021.

Does Pa.’s new unemployment system work? It depends who you ask.

Users poured their frustrations out on the Department of Labor and Industry’s Facebook page on Thursday morning.

How many of those claimants found jobs, are waiting to file, or are blocked from submitting claims due to technical difficulties is not clear.

Users poured their frustrations out on the Department of Labor and Industry’s Facebook page on Thursday morning.

“Tried several ways to get through, [but] this system is not working !!! Been trying to get any help at all !!,” posted a commenter in Olyphant.

“No Problems until new system. Says I have to wait a week!!! That’s past your Saturday deadline!!!!,” posted a commenter in Erie. 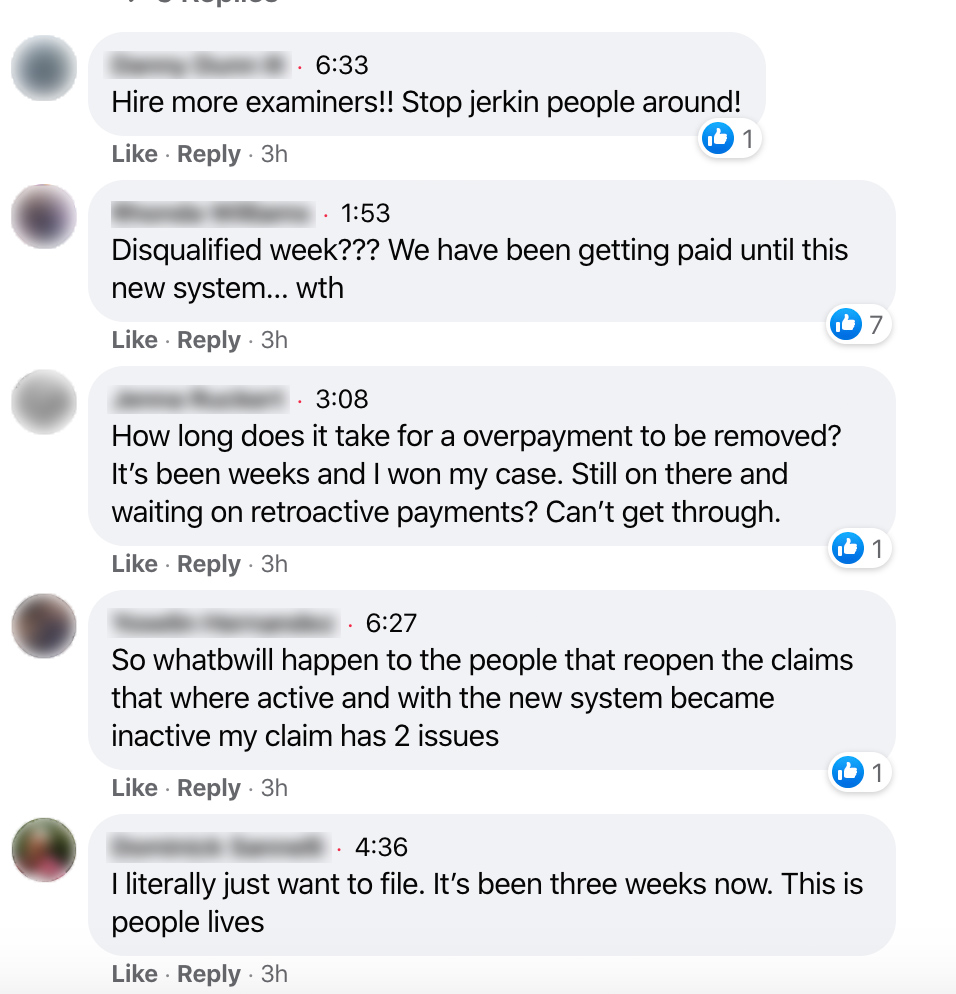 Screenshot of comments on the Department of Labor and Industry’s Facebook page.

A project more than a decade in the making, the new web portal launched over complaints from advocates and people on unemployment that changing the system during the pandemic-induced recession would cause problems for many thousands more people than during normal times.

Since the launch at 3:05 a.m. on Tuesday, claimants and their advocates said they have seen many different kinds of errors, such as incorrect information appearing in users’ claims, issues with log-in information, messages their claims are disqualified, and the phone filing system going down.

State officials said they are monitoring and working to fix these problems, and are pleased with how the new software is performing.

“We are measuring our success at this point with the number of people who have successfully been able to file,” said Department of Labor and Industry Acting Secretary Jennifer Berrier.

That’s well below the number of people likely using the system, based on the most recent numbers available. Continuing claims for unemployment have been above 210,000 for more than a year. The week of June 3, around a quarter-million Pennsylvanians submitted new or ongoing unemployment claims.

For those unable to get through the online portal, the state relaunched an updated phone-based filing system called the Pennsylvania Teleclaims system (PAT) on Thursday. That system had received around 9,161 submissions that morning, but many other users reported difficulty getting through or error messages. DLI said it is updating its FAQs based on these complaints.

“They’re trying to put a happy face on it, but there’s large numbers of people who haven’t been able to file,” said John Dodd, director of the Pennsylvania Unemployment Project.

Some had low expectations for the rollout, based on issues with a different website built by the same company, the portal for Pennsylvania’s Pandemic Unemployment Assistance (PUA) program.

“I would not at all call this a complete disaster,” said Julia Simon-Mishel, supervising attorney with Philadelphia Legal Assistance. However, she said the real test would be whether people who filed are getting their payments.

So far, state officials reported $85 million had been paid out to more than 107,000 claimants. According to Berrier, the time between filing and payment is averaging between 24 and 48 hours.

Claimants have until midnight on Saturday to file to avoid an interruption in their benefits. People who have difficulty filing this week will be able to submit backdated claims online for up to eight weeks, said Berrier.

On social media, some claimants shared success stories, as well as gripes.

“I was able to get through on the phone line yesterday and just logged into my account,” wrote a commenter in Western Pennsylvania, on DLI’s Facebook page. “The issues have been resolved. Thank you!”

Six of 15 board members of embattled Pa. pension fund officially call for removal of its top command