Demonstrators from MarchOnHarrisburg stand outside Pennsylvania’s Capitol to press lawmakers to pass legislation banning them from taking gifts from lobbyists and others aiming to influence them, Wednesday, June 9, 2021, in Harrisburg, Pa. The Pennsylvania Legislature does not limit how much lawmakers can accept from lobbyists and others seeking to influence them.

Activists target top Republican in Pa. Senate as they push for gift ban

Four protesters were arrested and charged with trespassing during the peaceful demonstration at the Capitol. 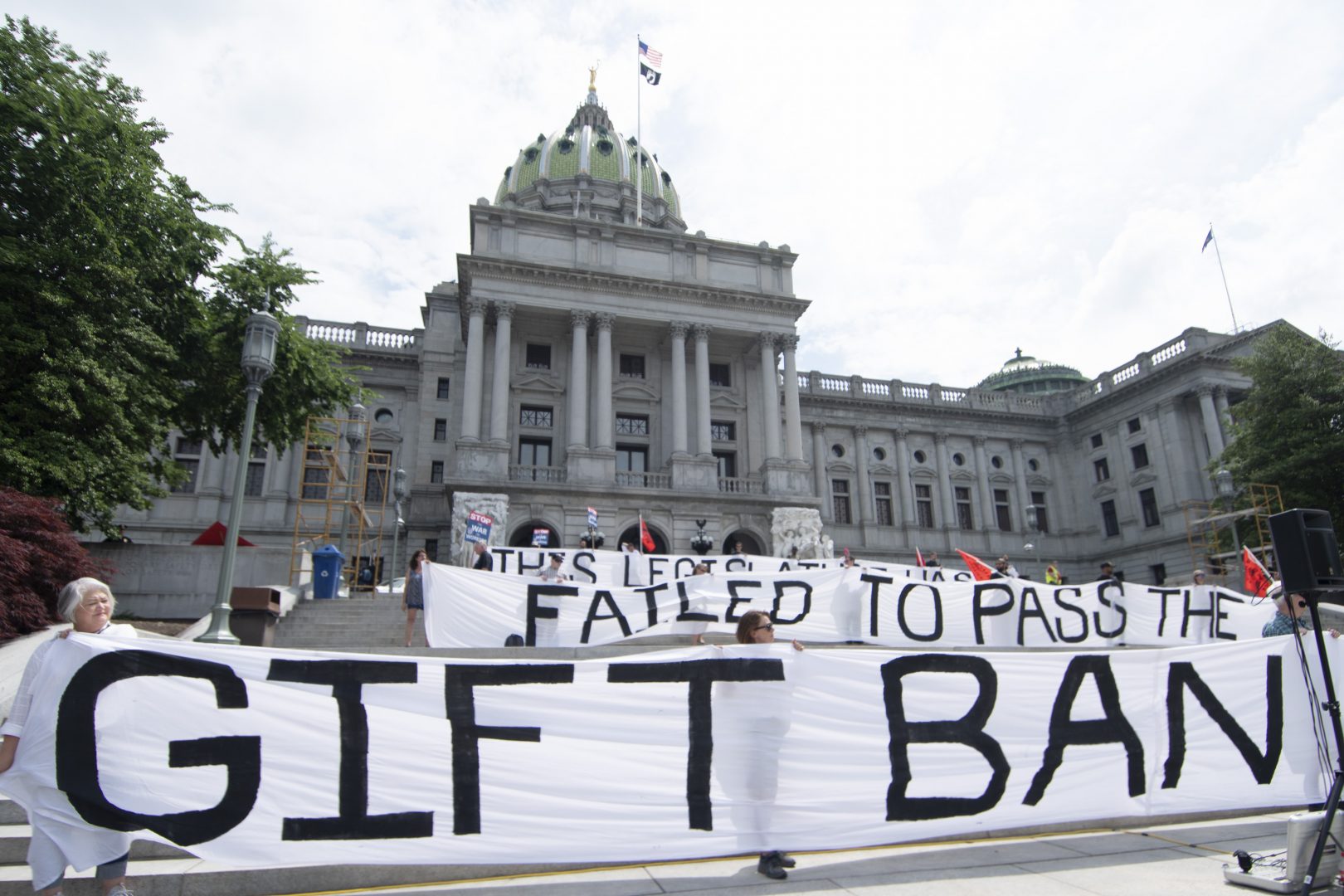 Demonstrators from MarchOnHarrisburg stand outside Pennsylvania’s Capitol to press lawmakers to pass legislation banning them from taking gifts from lobbyists and others aiming to influence them, Wednesday, June 9, 2021, in Harrisburg, Pa. The Pennsylvania Legislature does not limit how much lawmakers can accept from lobbyists and others seeking to influence them.

(Harrisburg) — Using song and chant, a group of activists marched through the Capitol’s hallways Wednesday, even momentarily disrupting the Senate’s voting session, demanding that lawmakers pass legislation to ban public officials from accepting gifts from special interests and others trying to influence public policy.

The activists, from the grassroots group MarchOnHarrisburg, rallied on the steps outside the Capitol before making their way inside. Most marched to the office of Senate President Pro Tempore Jake Corman (R., Centre), where they encountered a locked door, while others gathered in the Senate gallery, where they brought the day’s voting session to a brief halt with their chants of “Stop Taking Bribes.”

“This is not a fringe issue, this is not a lefty, radical issue. This is talking about getting money out of politics,” activist Randall Hayes, who leads the group’s Harrisburg chapter, said as he live-streamed the protest on Facebook.

Activists said they have pushed for nearly two decades for a gift ban. But year after year, they said, they’ve seen gift ban bills stall for lack of support.

Pennsylvania is one of eight states that does not have a complete or partial ban on legislators and other public officials and employees receiving gifts from lobbyists and other advocates with a stake in government.

Lawmakers and other public officials in the state can accept any gift they want, as long as they disclose it in annual statements of financial interest that must be filed every year with the State Ethics Commission.

Even then, they only need to disclose gifts worth $250 or more, and transportation and hospitality worth $650 or more.

In 2015, Gov. Tom Wolf signed an order that banned members of the executive branch from accepting gifts from lobbyists and other organizations. Though he and others have urged the legislature to do the same, they have not taken action, despite numerous gift ban bills that have been introduced over the years.

Activists on Wednesday said they targeted Corman because, unlike some leaders, he has not publicly backed a gift ban.

A spokesperson for Corman said the senator had no comment.

As it stands, Sen. Lisa Baker (R., Luzerne) has introduced a bill in this two-year legislative session that would prohibit public officials and employees from taking gifts from lobbyists and anyone with or seeking a government contract, or trying to influence official action.

There would be exceptions for nominal gifts or gifts from family and friends.

“Merely requiring the disclosure of gifts received above a certain value is no longer regarded by the public as an effective guard against corruption,” Baker said in a legislative memo seeking support from her colleagues earlier this year.

Senate Majority Leader Kim Ward (R., Westmoreland) has signed on as a co-sponsor to the legislation. But as of now, the measure is in the State Government Committee and has not been moved since it was introduced in March.

Although Wednesday’s protest was peaceful, four activists were arrested and charged with trespassing after resisting orders to move from in front of the door to Corman’s office.