Two dozen people in Philadelphia called on the state to process their unemployment applications during a protest on May 6, 2021.

What you need to know about Pennsylvania’s new unemployment system

The commonwealth has been trying to update its computer system for more than a decade.

Here’s why the timing is controversial, and what users can expect in the coming weeks.

Pennsylvania has been trying to update its computer system for more than a decade, starting around the same time many states decided to upgrade unemployment programs that had become antiquated. The commonwealth first selected IBM, which received $170 million to replace its system. Pennsylvania eventually sued the company, saying it had gone $60 million over budget and failed to produce a working system.

In 2017, the commonwealth awarded a contract to Geographic Solutions Inc. to try again.

That company was previously slated to roll out a new unemployment system for the state in 2020. When the coronavirus pandemic shut down the economy and flooded the unemployment system with new claims, officials decided to push back the overhaul to focus on meeting that need.

There are currently around 250,000 people with new or continuing unemployment compensation claims on file, according to state data. At the peak of the pandemic recession, the number topped 1.2 million. The current number includes about 100,000 more people compared to before the pandemic

Throughout this rush of new users, the system has been “held together with rubber bands and duct tape,” Acting Secretary of Labor and Industry Jennifer Berrier said during a recent press briefing. She said the state is now in a good place to make a transition that will help the department be more responsive to claimants.

“It’s just a more modern system,” said Berrier. “It allows you to update information in real time, whereas before that might have been a paper process.” For example, users will no longer be required to wait to receive a PIN in the mail, but will instead be able to log in using a Keystone ID, an identification used across several benefits programs in the commonwealth.

Even so, groups that represent people receiving unemployment benefits criticize the timing of the update.

“We’re very worried,” said John Dodds, director of the Philadelphia Unemployment Project, a nonprofit started in 1975 to lobby for the unemployed. He fears the transition will take resources away from other urgent problems with administering benefits, such as the 289,000 people with claims that are still waiting for a determination. The state has argued the vast majority of those claims are fraudulent.

Replacing a system that still has higher than normal usage “could create disruptions and more delays for a lot more people than it would in normal times,” said Julia Simon Mishel, supervising attorney of the compensation unit at Philadelphia Legal Assistance.

Bugs, and even total failure, are common in massive unemployment insurance system upgrades. One survey by the Century Foundation found that as of 2016, 26% of such projects had failed and were abandoned, and another 38% were running over time, over budget, or were “lacking critical features and requirements.” 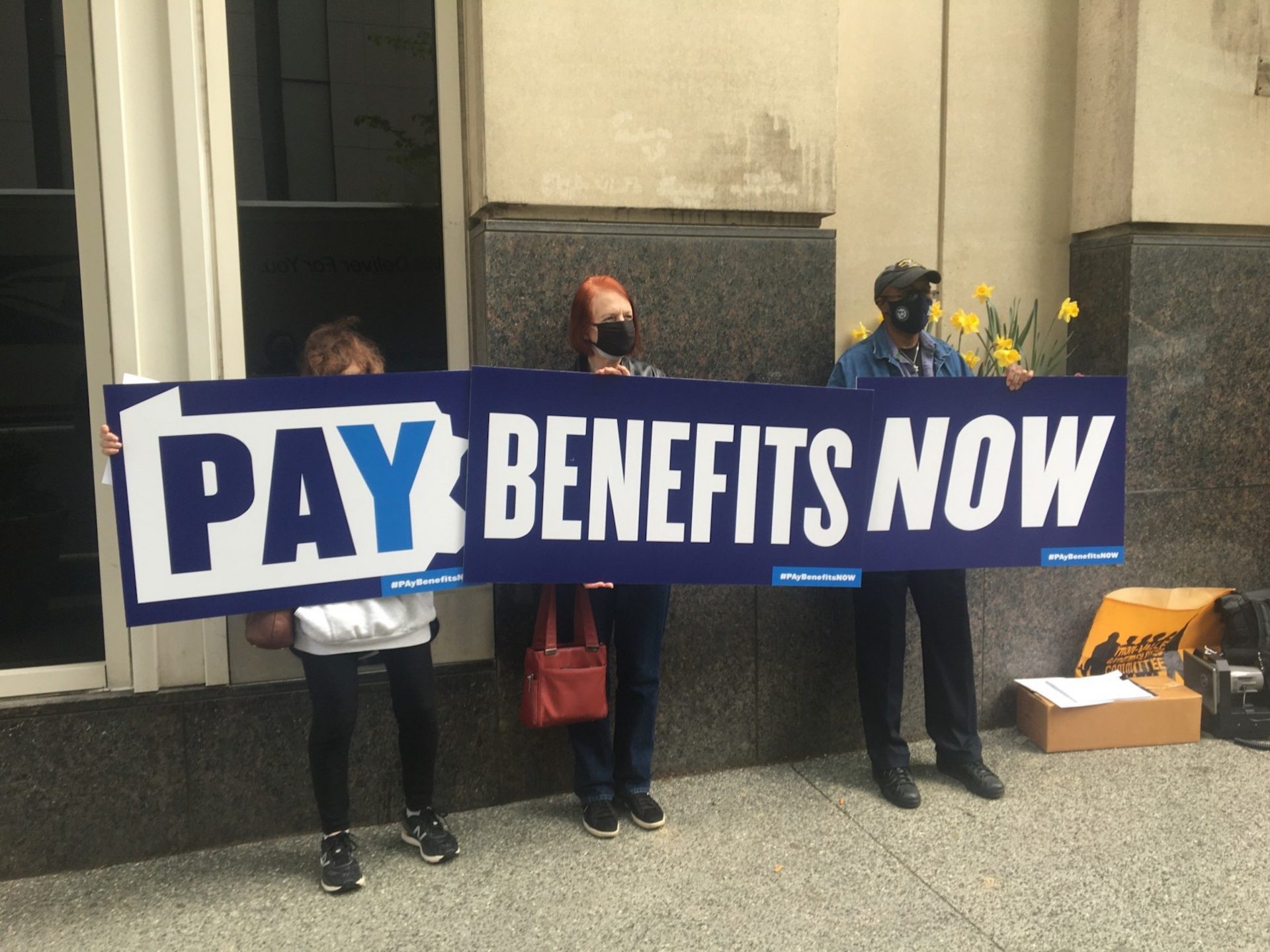 In order to avoid issues, state officials have released a swath of tutorials and information to help users navigate the new system, which is slated to open on June 8.

“I hope our users take a little time to check out the new system before it launches, so they feel comfortable logging in,” Berrier said on May 28. Starting Tuesday, the system will resume taking both new and continuing unemployment claims, both of which are currently paused during the transition period.

Online tutorials are available in English and Spanish. The Department of Labor and Industry is hosting a series of live workshops, which are also recorded, in which recipients and employers can learn more about the new system.

Information about widespread glitches will be shared on the department’s social media channels, or communicated directly to users, said Berrier.

Expecting a high volume of users on June 8, the state has instituted a “waiting room” function when claimants log on, to keep the system from crashing.

“If you can afford to wait a few days, wait a few days,” said Simon-Mishel, explaining that will give the state more time to work out initial bugs, and that the wait times should be lower.

Philadelphia Legal Assistance has published its own online reference database, which will also be surveying users about their experiences, as well as sharing news and information about glitches and fixes.

To help deal with the transition, Pennsylvania hired 500 customer-service staff to take questions, who will be trained and ready in time for June 8, according to Berrier. The UC Service Center number is 888-313-7284.

The first few weeks will likely be bumpy, both state and nonprofit advocates noted, but all said they hoped the new technology would eventually improve service.

“Technology changes will always have problems, even if you do a top-notch job,” said Simon-Mishel.

Pennsylvania Department of Labor and Industryunemployment