Morey’s Pier on the Wildwood Boardwalk advertises $15 an hour jobs on May 31, 2021, Memorial Day.

‘We gotta run around like rats’: Jersey Shore businesses still struggling to hire as season gets underway

Some economists say more generous pandemic-era unemployment benefits are not the only factor.

(Jersey Shore, N.J.) — The display case near the entrance to the White Dolphin Restaurant in Wildwood is usually filled with a variety of pizzas waiting to be sold by the slice.

This year, it’s nearly empty, save for a stack of paper plates and a couple packages of premade hamburger buns.

“I don’t have pizza anymore,” said owner Mike Madafias, who has had the business since 1989. “I don’t have a pizza man.”

It’s one of 10 seasonal jobs the restaurant is still trying to fill. Right now, Madafias only has five people on the payroll. He has a sneaking suspicion why.

“Everybody collects unemployment. Nobody wants to work,” said Madafias. 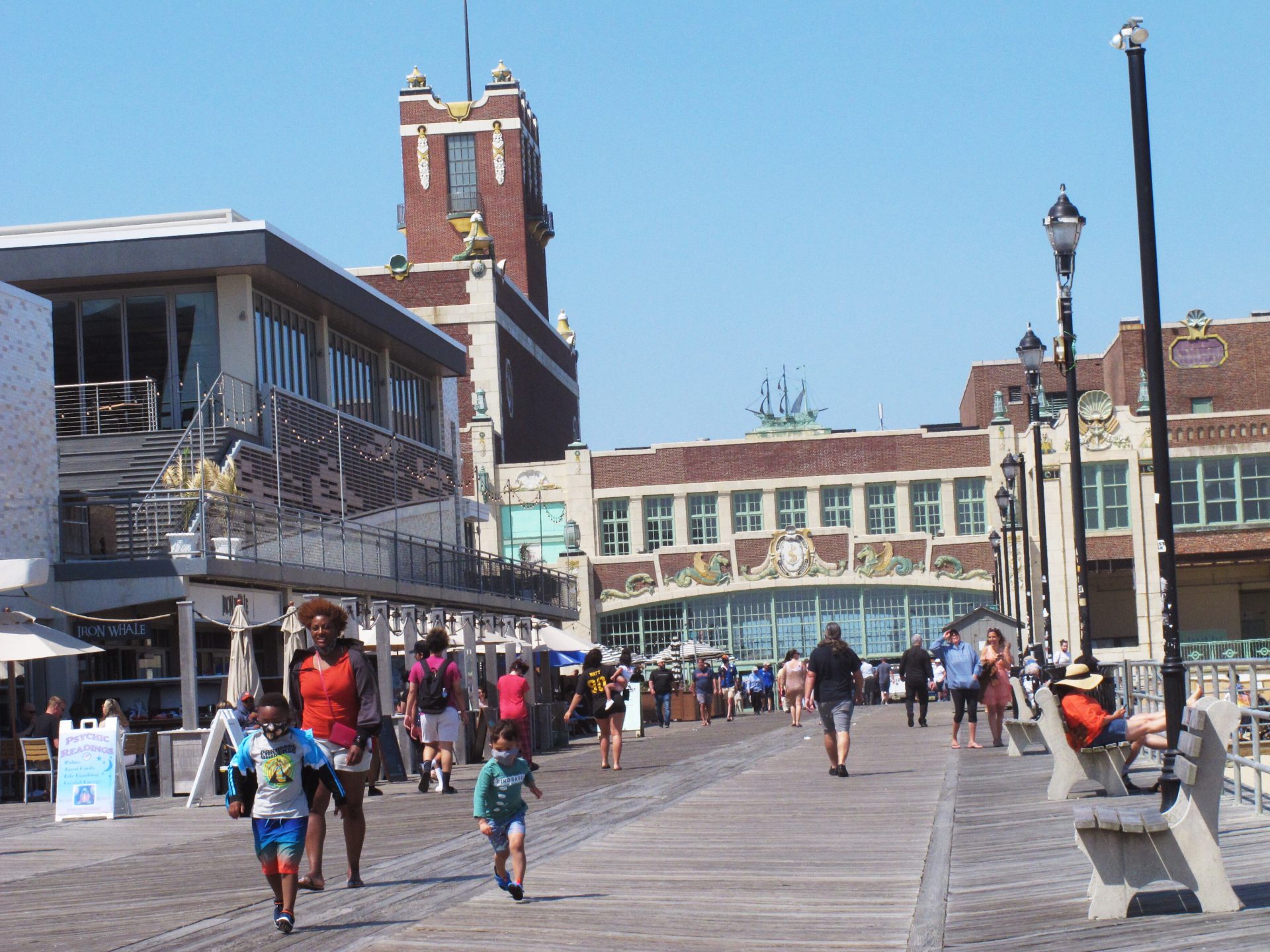 A woman walks with two children on the boardwalk in Asbury Park N.J. on Friday, May 21, 2021. Businesses and residents alike expect this summer at the Jersey Shore to be busier than last year as more people get vaccinated and COVID19 restrictions are scaled back or eliminated.

It’s a dilemma businesses in many towns along the Jersey Shore are facing right now. The state recently raised its minimum wage for seasonal workers to $11.10 per hour — $3.85 above the federal minimum wage —  but many business owners say potential employees may be able to make the same or more staying unemployed.

An April report from Bank of America Global Research estimated workers nationwide who previously earned less than $32,000 a year could make more money in the near term from unemployment benefits.

However, some economists say more generous pandemic-era unemployment benefits are not the only factor.

Some people are still concerned about the risk of contracting COVID-19. Others are also reluctant to take jobs right now because they may still be caring for children attending school online, something that prompted many workers, especially women, to leave the labor force over the past year. And economist Arin Dube told NPR’s Planet Money the problem may be low wages, pointing out places like Amazon that have increased their starting pay to $15 an hour and have not had trouble attracting workers.

Some places, like Morey’s Piers and Water Parks in Wildwood, have raised wages to $15 an hour for this summer season to try to offset that calculus.

None of the business owners WHYY News spoke to on Monday would say how much they are offering to pay their workers.

Regardless of what’s behind the small labor pool, many Jersey Shore employers are frustrated as they think about the rest of the season.

Manager Abbey Moore is anxious about the end of June, when school will be out and high school students will start packing the aisles of Shriver’s Salt Water Taffy and Fudge, another shop along the boardwalk in Wildwood.

Fourth of July weekend, one of the busiest of the season, is also on her mind.

“The weekend, we got by,” said Moore of the Memorial Day holiday. “I’m gonna say the next couple weeks, when it’s in full swing, we’re gonna definitely need more people.” 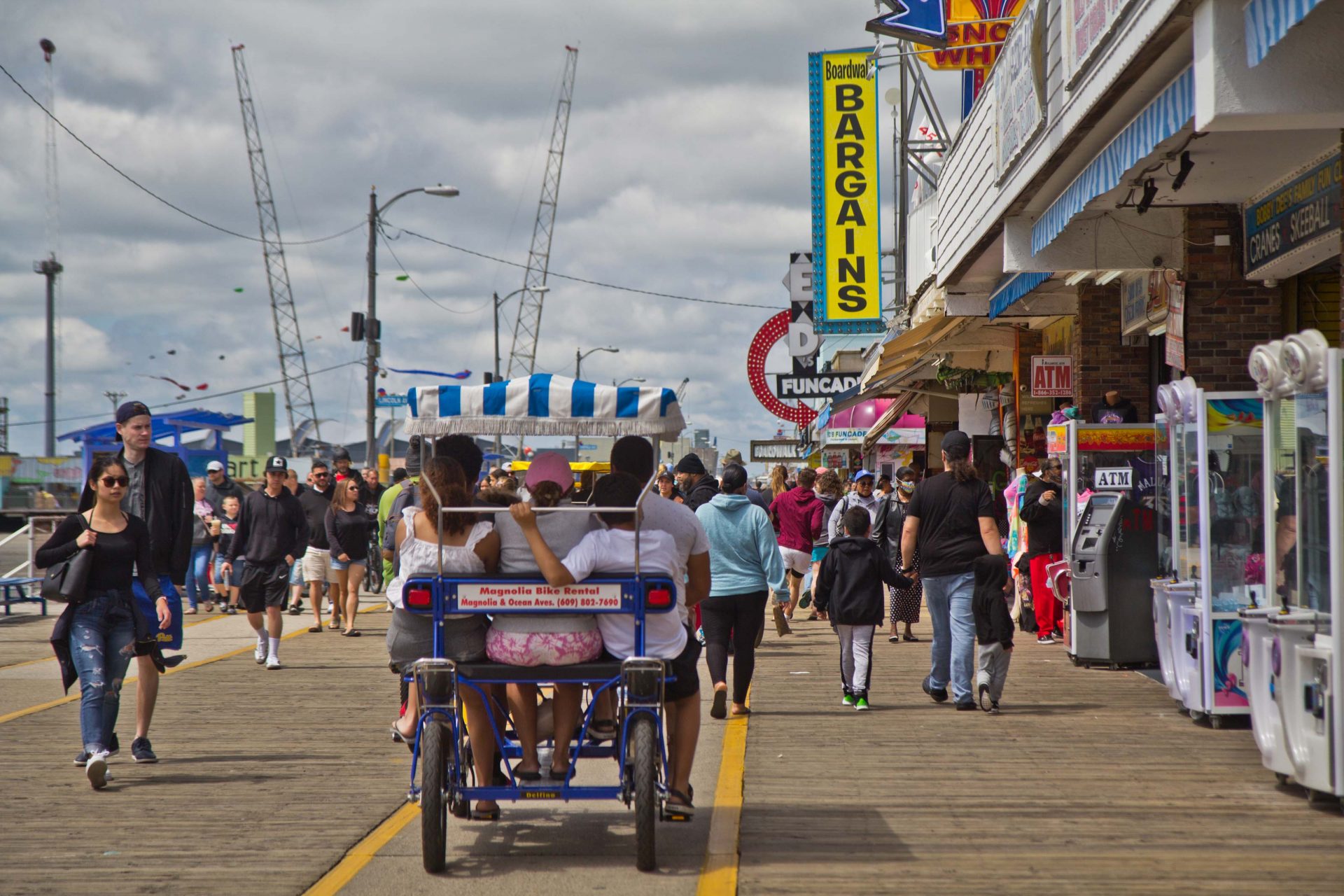 The Wildwood Boardwalk was packed on the morning of May, 31, 2021, Memorial Day.

The candy shop typically has 12 seasonal employees. Moore only has four right now.

“It’s not a hard job. It’s not like you’re cooking in a kitchen in 90 degree weather,” she said. “You’re in a candy store with air conditioning.”

Bobby’s Place, a classic T-shirt emporium, is also hiring. Owner Joseph Sakkal’s shop usually employs five seasonal workers, but he and his wife only have three on the payroll.

“We gotta run around like rats around the store,” he said.

By contrast, those who decided to take summer jobs in Wildwood appeared happy to have the work, including Derryk Sellers, who signed up to staff a basketball-shooting booth 15 hours a day, seven days a week until the first week of August, when he returns to North Carolina to finish up his senior year of college.

Sellers said he’s getting paid more than he was last summer, when he worked the rides at Morey’s Piers. But he also thinks it’s a better gig.

“It’s more interactive,” said Sellers, a rising college senior. “I live through people on the boardwalk. I see people having fun, I have fun through them.”

Tu A’Belle, who is from Jamaica, will be working at Morey’s Piers through Labor Day, thanks to a seasonal work program for international students.

She’s still getting used to the cooler weather but said she loves the gig.

Pennsylvania businesses, consumers among those getting short end of the stick amid lumber shortage