In this file photo, marchers participate in a May 31, 2020, protest in State College against police brutality and racism.

“It happens so often that you get tired of being tired, and you learn how to live through the trauma."

It’s been one year since the murder of George Floyd in Minneapolis. The nine-minute video of a police officer kneeling on Floyd’s neck led to nationwide protests and calls for reform. Some residents of the Central Pennsylvania Black community talked with WPSU about what Floyd’s death meant to them.

(State College) — Harriett Gaston of Altoona remembers the first time she watched the video of a policeman killing George Floyd.

“I could feel the helplessness of anybody watching that,” Gaston said, “And having empathy for what was going and just that feeling of ‘why can’t we do something.’”

“First there was just the news anchors, very tense lots of anxiety, but no photos, talking about the situation,” Cissel said. “And then I remember, once the video that that young woman took broke, it was everywhere. Just the horror that somebody kneeled on his neck for nine minutes, and it was all recorded.”

He and his wife, Amira, have three kids. Two of them are young boys. And he worries about their safety as Black children.

“It’s upsetting that this has happened. And I don’t know what to do to stop it,” Davis said, “outside of trying to prevent my own children from being put in these situations.”

Davis and his family have lived in two towns where Black men died at the hands of police.

In 2015, they were living in Baltimore when Freddie Gray died in police custody. And, then in 2017, Osaze Osagie was shot and killed by the police in State College. 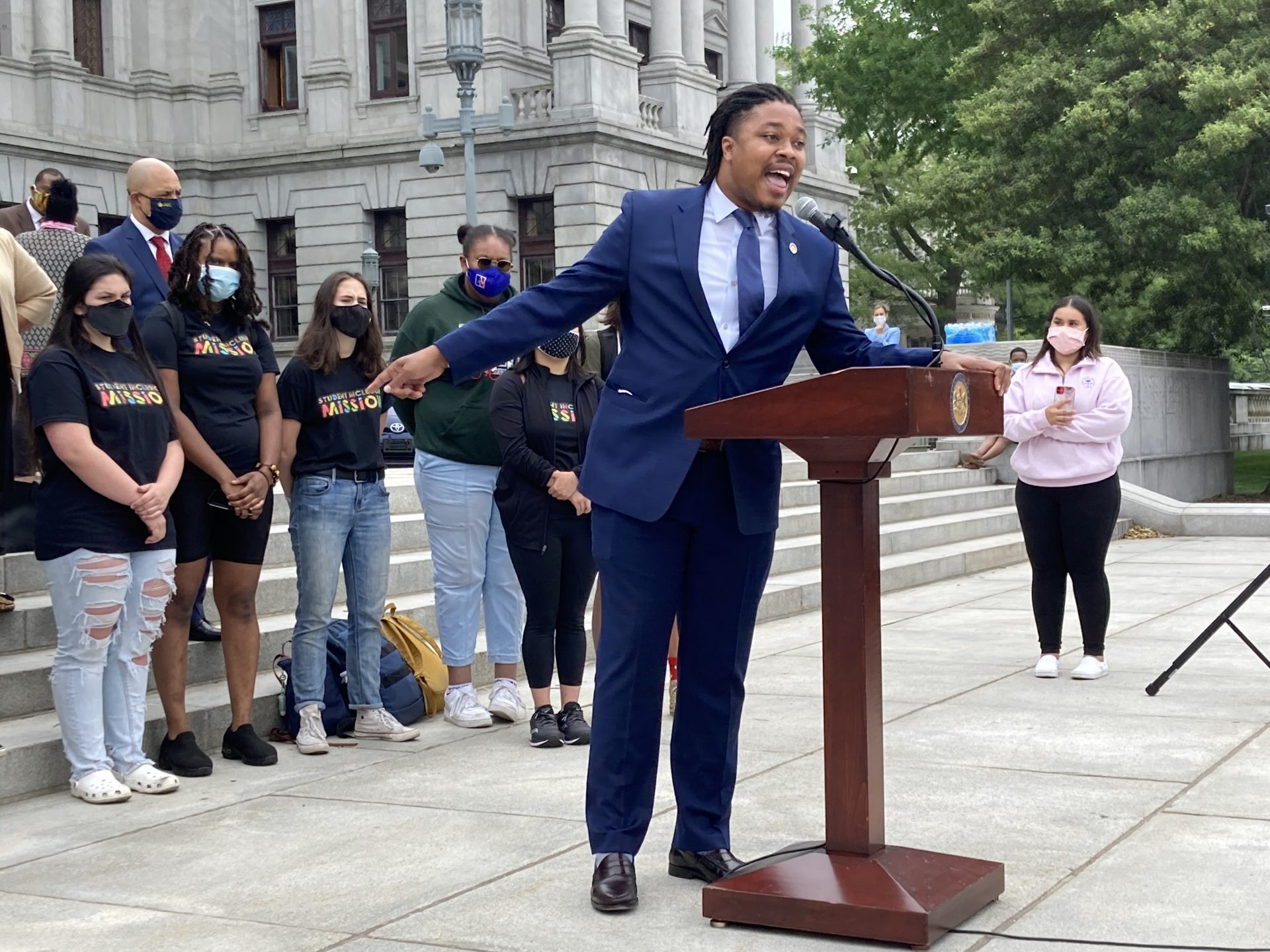 State Rep. Malcolm Kenyatta (D-Philadelphia) rallies with a group of high school students and lawmakers on May 25, 2021 to remember the one-year anniversary of George Floyd’s murder at the hands of Minneapolis police.

“It happens so often that you get tired of being tired, and you learn how to live through the trauma,” Davis said, “It was one of these things that was like, ‘OK, another wrongful murder of a Black man. I wonder what’s going to happen tomorrow.’”

It’s a sentiment shared by Gaston, who could not watch the video of Floyd’s death over and over.

“It takes a toll. There’s, no ifs, ands or buts about it,” Gaston said. “There’s an emotional toll that also impacts the physical. Sleep, anxiety, eating. Seeking out, you know, ‘I got to talk to somebody. Who do I talk to, to deal with this?’”

She also recognizes the importance of talking with friends and others about it.

Rev. Cissel has had to help her church, the Unitarian Universalist Fellowship of Centre County, cope through it all.

“I have a tradition, with my congregation is when something happens…particularly that has to do with race or violence is I talk about it at the beginning of our service,” Cissel said. “I talk about it with leadership and in one-to-one conversations. And then I write about it. And I share it. And I encourage other people to talk about it, too.”

Davis also continues to have conversations with his children.

Davis, Gaston, and Cissel do still have hope for the future. But, they all know there’s a lot of work to be done.

“I don’t want my children to continue fighting that battle, although I know that they will. We’re still having this conversation about what does it mean to just be Black, like just to exist. Can I just exist in my own town?” Davis asks.

Davis hopes race relations in State College and America will get better.

Gaston wants more allies to join the fight for justice.

“I think the biggest dream I have is those white allies who says, ‘I saw it, I understand, I want to make a change’ getting involved with those who are in this case in the minority,” Gaston said. 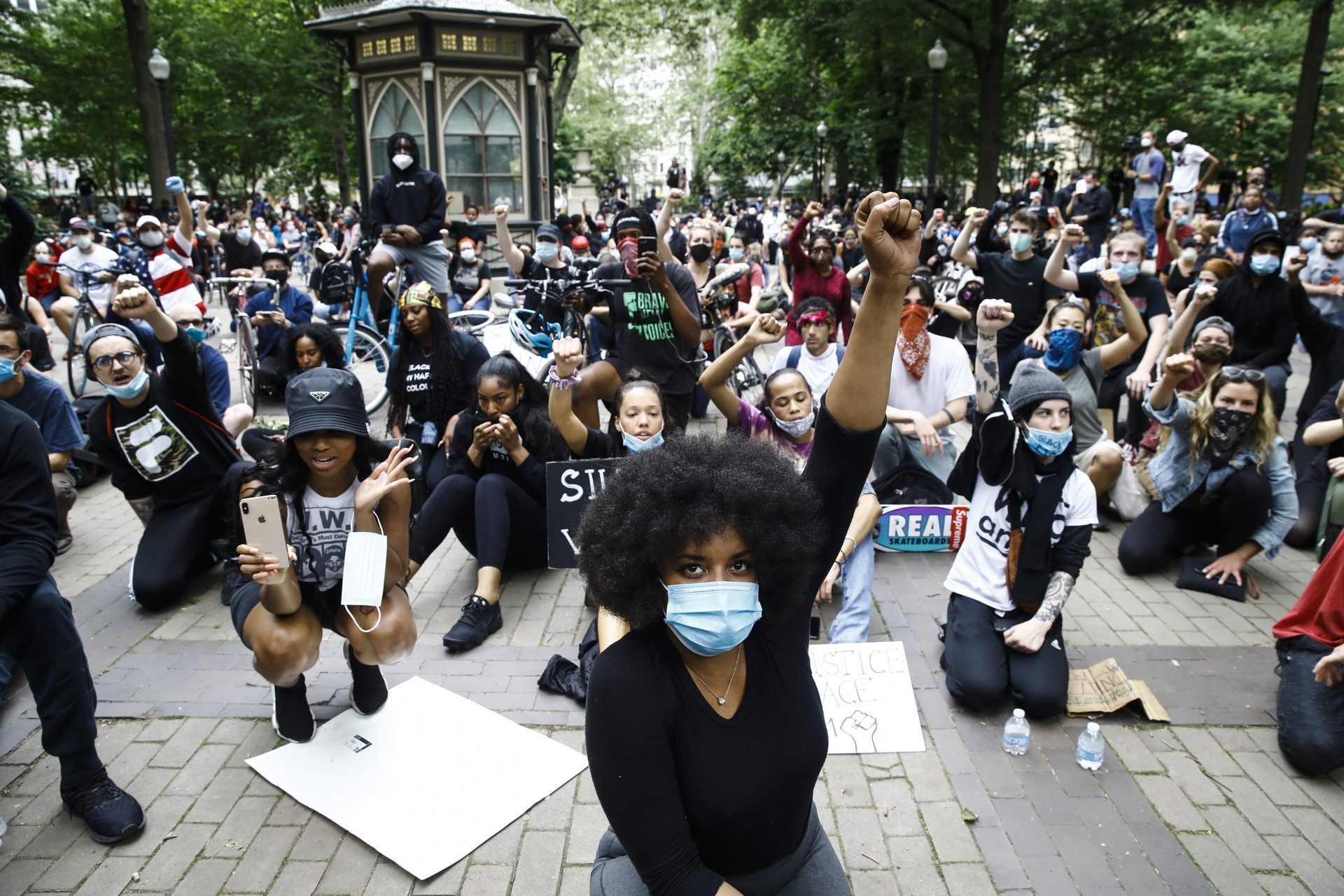 FILE PHOTO: In this Tuesday, June 2, 2020 file photo, demonstrators chant, at Rittenhouse Square in Philadelphia, during a protest over the death of George Floyd, who was killed May 25 by Minneapolis police.

Cissel also encourages others to take that first step and get involved with local justice organizations.

“You need to put yourself in proximity to people who are affecting change. And here in State College, here in Centre County, the 3/20 Coalition, the State College NAACP and the African American clergy are here waiting on you to put your hand out and put your hand in ours, so we can help you help,” Cissel said.

The 3/20 Coalition held a community reflection in State College, to remember George Floyd and other Black lives lost at the hands of police.

3/20 Coalition co-chair Nanre Nafziger hopes that this will help the whole town.

“We want people to reflect on their personal journeys and also on our journey as a community. We want people to take this moment to pause, for feeling the pain of what these murders have done to the families, but also what they’ve done to us,” Nafziger said.

Looking for a clean slate? Pa. Pardons Board secretary to offer one-on-one consults at Norristown barbershop