A year after George Floyd’s murder, Black Pa. lawmakers double down on push for police accountability 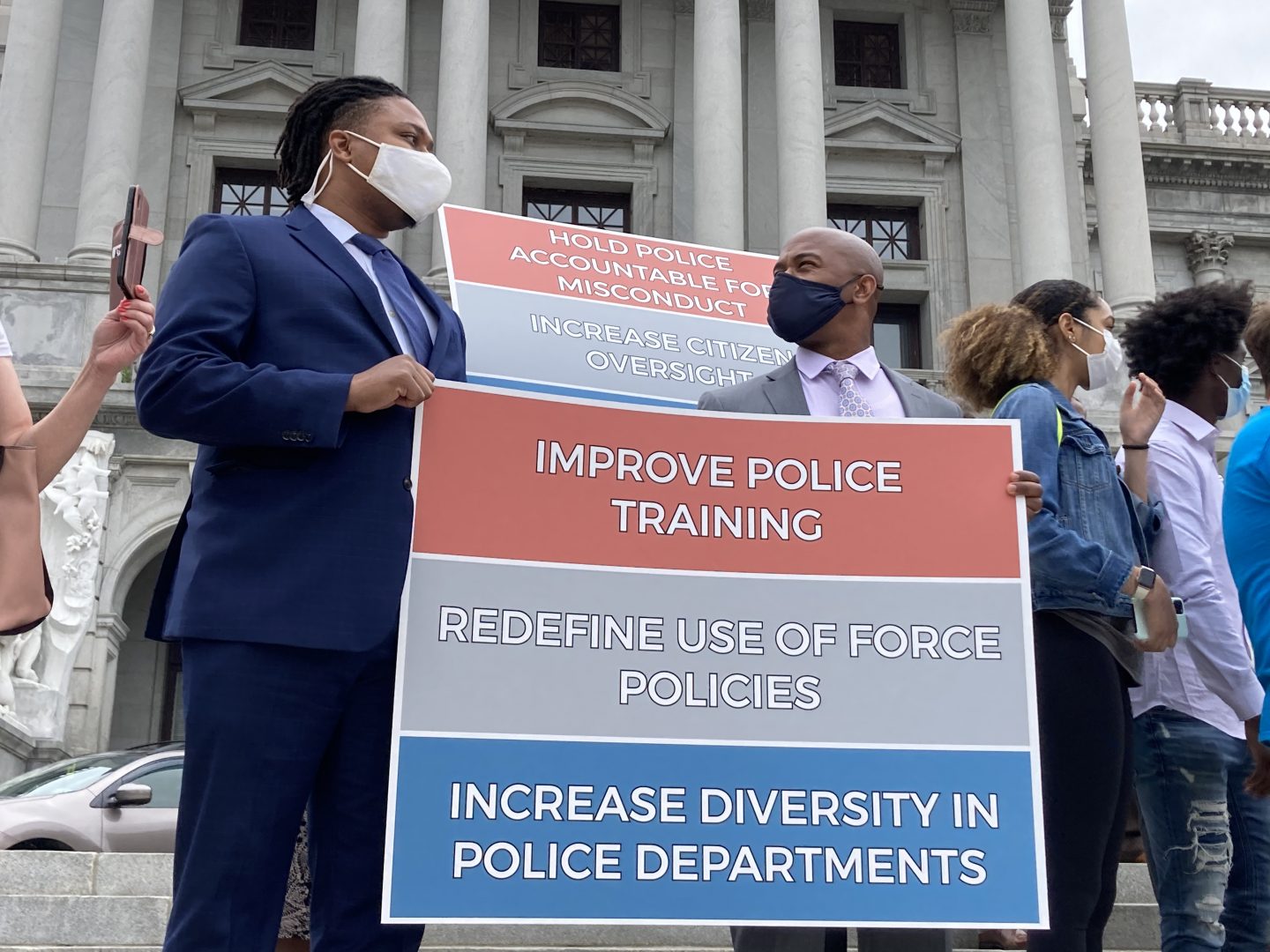 A group of around 50, including members of the Legislative Black Caucus and students from Philadelphia-area high schools, rallied at the Capitol building. They remembered the man whose death sparked worldwide calls to change how police interact with communities of color and other marginalized groups.

The 46-year-old Floyd was arrested for allegedly using a fake $20 bill at a convenience store in Minneapolis and died after police officer Derek Chauvin kneeled on his neck for around nine and a half minutes.

“He should have survived that encounter,” House Minority Leader Joanna McClinton (D-Philadelphia) said. “He should be on these steps with us, calling for police reform. But instead, we’re praying continually for his family!”

Veronica Botero of Abington Senior High School outside Philadelphia participates in a group called the Student Inclusion Mission. She and others said they skipped classes and took to the streets during last year’s racial justice protests.

Botero said she’s relieved Chauvin was convicted of Floyd’s murder, but surprised some elements of police pratices, that came under criticism during the incident, remain intact.

“Over the years, we’ve seen Blackpeople murdered with our own eyes, the technology of today filming what should have been the racism of yesterday. Yet history continues to repeat itself and people continue to choose the wrong side of history,” Botero said.

After weeks of widespread demonstrations, Gov. Tom Wolf signed a number of measures last July that he said “[made] progress in keeping every Pennsylvanian safe.”

Police officers now have to be more thoroughly vetted before being hired, and must have a mental health evaluation every time they use deadly force in the field. There’s now an electronic database of officer service records, which includes any instances when they parted ways with a department. Agency heads now have to explain decisions to hire officers with a history of violent or illegal behavior in their official hiring reports.

There’s even a citizen commission tasked with reviewing state police incident investigations into use-of-force incidents. That body held its second meeting earlier this month and plans to start reviewing cases in the coming months.

But Rep. Donna Bullock (D-Philadelphia), who serves as the Legislative Black Caucus chair, told Tuesday’s rally crowd so much more needs to be done.

“We have to do the real work for these young people so that they can feel safe in their communities, so that they can build positive relationships with law enforcement, but also because…we don’t need to come back another year with another name,” she said.

Measures like a statewide ban on police chokeholds have been stuck in committee and haven’t come up for a vote. The Pennsylvania Municipal League lists a dozen pieces of legislation it’s tracking that would address everything from police body cameras to no-knock warrants. All of those are currently parked in committees. WHYY reports just two of the Legislative Black Caucus’ list of 19 measures passed last year, even as police reform calls grew ever louder.

Student Inclusion Mission students said lawmakers can be pushing for measures beyond police reform. Raising the minimum wage and replacing school police officers with mental health professionals, they say, would go a long way to bridging the racial equity gap for young people.

“[Those] are people that are here to help us, and to help us thrive and learn about social justice and reform,” Yasir Valentine of Cheltenham High School said.

Near the end of the rally, Rep. Malcolm Kenyatta (D-Philadelphia) called suggestions drugs and other circumstances contributed to George Floyd’s death “nonsense” and urged other lawmakers to ensure no one else suffers his fate.

“This is real simple stuff,” Kenyatta said. We cannot allow to continue [sic] a system by which law enforcement officers can summarily execute citizens in the streets. Nobody should be for this!”

After saying he didn't want to litigate 2020 election, Parnell says he supports audit of Pennsylvania results