Wanda Williams, Democratic candidate for mayor of Harrisburg, awaits the results of the primary election, May 18, 2021.

Williams has earned the right to campaign this fall to become the city’s second Black and second female mayor.

Williams, in a historic victory, narrowly defeated Mayor Eric Papenfuse and three other challengers to earn the right to campaign this fall to become the city’s second Black and second female mayor.

With all precincts reporting, Williams had 1,776 votes, or 28.9 percent, in unofficial final returns, holding off Papenfuse, who was running a very close second with 1,720 votes, or 27.9 percent of the vote.

Papenfuse, who had been seeking a third term, called to concede about 11:40 p.m.

Williams and Papenfuse didn’t talk directly – Williams was in the midst of her first press interviews as the nominee.

But he left a voice message that Williams shared: “Hey Wanda, it’s Eric. I just wanted to call and give you congratulations, and pledge that I’ll do everything I can to make sure that we have a smooth and seamless transition, and I wish you nothing but the best. Take care.”

Williams will have opposition in the fall general election from Timothy Rowbottom, who was the lone candidate on the GOP primary ballot.

But the Democratic nomination was the real prize in Harrisburg Tuesday. The heavily Democratic city has not elected a Republican as mayor since 1977.

Williams and her supporters gathered to watch the results in a conference area at the S Club, in Harrisburg’s Uptown.

Increasingly upbeat campaign volunteers, family and friends, many sporting yellow t-shirts emblazoned with “Lifelong Democrat Wanda Willians for Mayor” on the front, noshed on a buffet table loaded with wings and meatballs. The bass from a DJ playing the main club room thrummed in the background.

Long before victory could be declared, many of Williams’ family – including a number of school-age grandchildren – were gone for bed or night work shifts. But the room filled up again with well-wishers from across the city after the results were announced at about 11:20 p.m.

“Wanda wins!” supporters shouted as the returns posted to Dauphin County’s website, giving Williams the narrow win. The room erupted in celebration, with those present thronging around the exultant candidate.

For Williams, the victory was the payoff of 16 years of handling residents’ issues one-by-one over four terms on the city council, buttressed by the relationships she had built as a lifelong resident of the city. 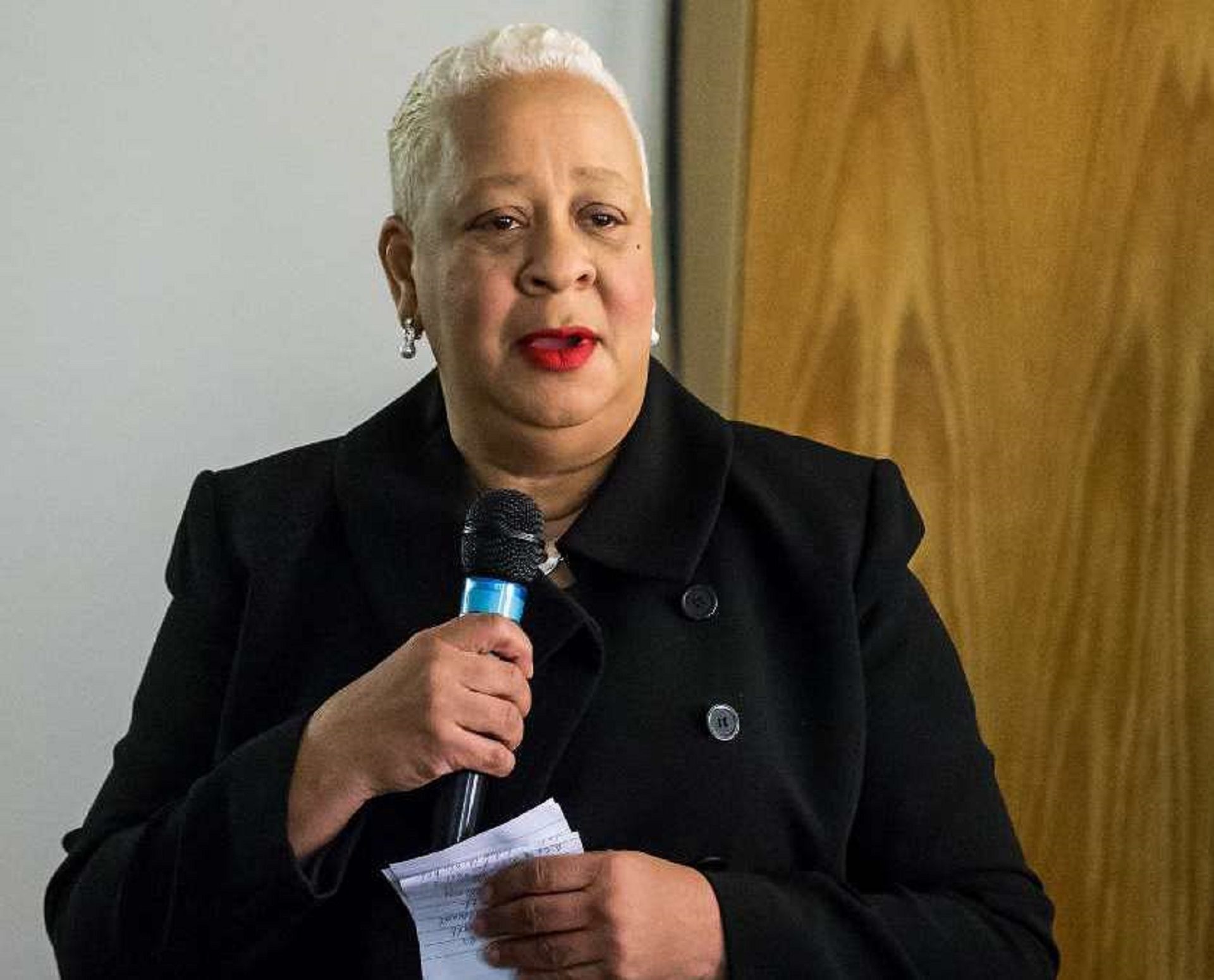 She said that her demonstrated concern for all of the city’s residents – including many in neighborhoods that she and her rivals charged have become somewhat forgotten by the Papenfuse Administration – make her the best candidate to take over City Hall.

That was echoed in some comments from voters Tuesday.

“I think just, she knows the city,” one voter who asked not to be identified said of her support for Williams Tuesday. “I can’t say she’s new, but it (the mayor’s office) would be a different role for her, and give her a chance to maybe do some new things.”

By contrast, the voter said, she didn’t feel like Papenfuse was making conditions in the city appreciably better after eight years, and as for Schankweiler and Banks, she felt their personal investment in the city, pre-campaign, just wasn’t a match for Williams.

In one key to the race, Williams also appeared to be running better than past challengers to Papenfuse in the mayor’s strongholds.

“She’s a woman, she has a history in local government, and she’s got a lot of experience in the city of Harrisburg,” said one voter leaving the 5th Ward polling place in Midtown, a precinct Papenfuse won with more than 70 percent of the vote four years ago.

Papenfuse’s past coalition seemed weakened by a well-funded and hard-charging challenge from Schankweiler, who had argued that his accomplished business resume was exactly what Harrisburg needed to attack persistent problems with crime, blighted properties and illicit trash dumping.

Williams, meanwhile, was not hurt quite as badly by the candidacy of Banks, a former city councilman who echoed some of her complaints about Papenfuse as the “mayor of Midtown,” but tried to argue that it was hard to trust Williams to do better since she was part and parcel of city government for the past 16 years.

Banks seemed to be wounded in this race by his longtime membership in the Republican Party, and questions about whether he truly lived in the city. A county judge ruled early this spring that Banks did in fact meet the test to qualify as a resident for the purpose of state election laws, but his critics had made a factual case that to that point, he was at best splitting time between homes in the city and neighboring Swatara Township.

But for some voters, Papenfuse’s problems also seemed to boil down to a connection thing.

“I just don’t feel like he understands everything that’s going on in this city,” one woman said.

She explained in her view, until you actually live with gunshots ringing out in your neighborhood, or know neighbors who have had relatives killed or caught up in drugs, it’s just hard for residents to see that the mayor knows what’s best for them.