Pediatrician Charles Goodman, left, explains to Frank Fierro, the father of 1 year-old Cameron Fierro, the need of getting the measles-mumps-rubella vaccine, or MMR vaccine at his practice in Northridge, Calif., Thursday, Jan. 29, 2015. Some doctors are adamant about not accepting patients who don't believe in vaccinations, with some saying they don't want to be responsible for someone's death from an illness that was preventable. Others warn that refusing treatment to such people will just send them into the arms of quacks.

The law would require doctors to let parents set their children’s immunization schedules. 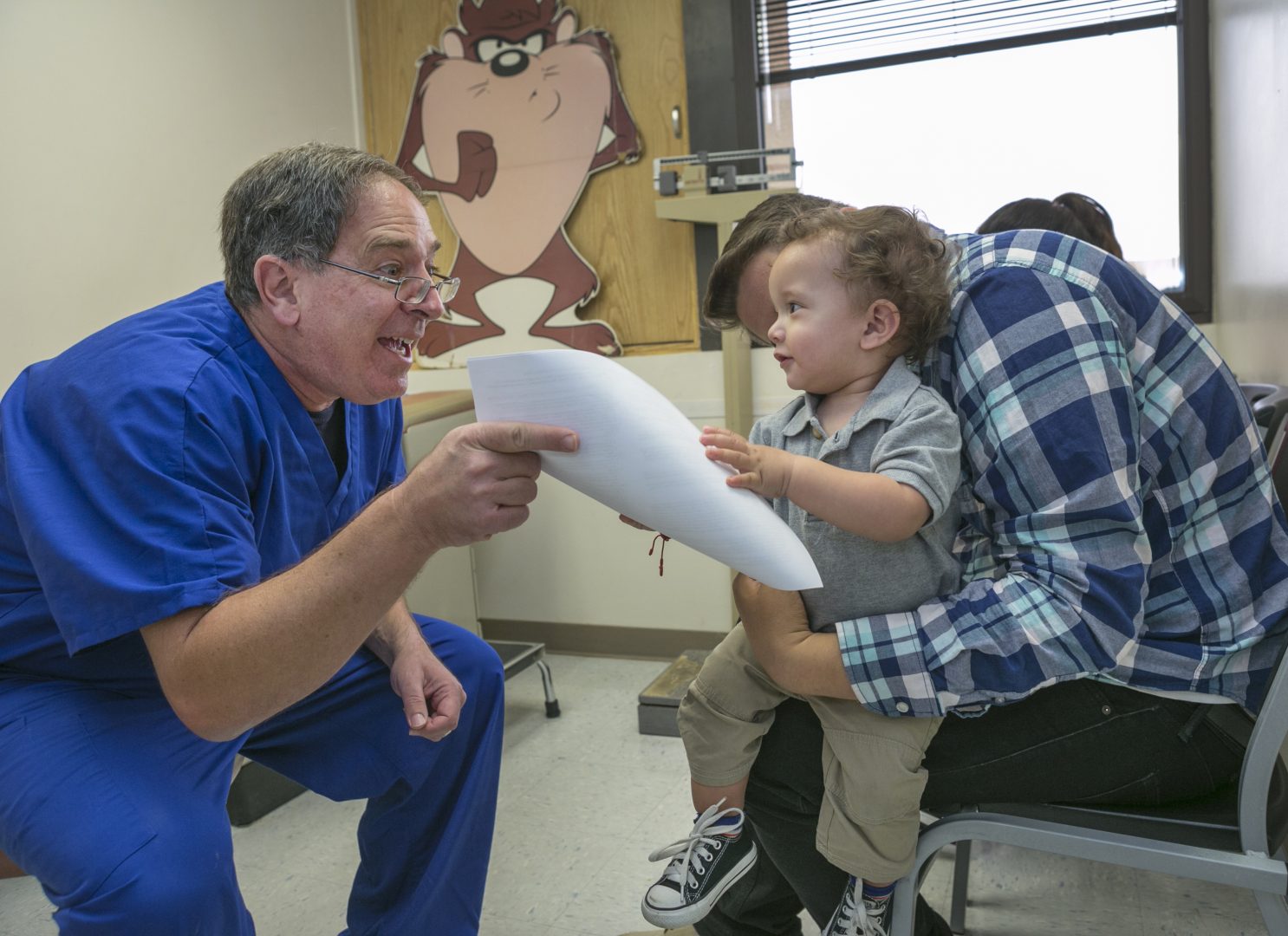 Pediatrician Charles Goodman, left, explains to Frank Fierro, the father of 1 year-old Cameron Fierro, the need of getting the measles-mumps-rubella vaccine, or MMR vaccine at his practice in Northridge, Calif., Thursday, Jan. 29, 2015. Some doctors are adamant about not accepting patients who don't believe in vaccinations, with some saying they don't want to be responsible for someone's death from an illness that was preventable. Others warn that refusing treatment to such people will just send them into the arms of quacks.

(Harrisburg) — Pennsylvania pediatricians say a bill in the state general assembly would interfere with their job of immunizing children if it were voted into law, and put newborns and sick children at risk for getting potentially deadly infections.

In part, the bill seeks to bar pediatricians from denying care to a child whose parent doesn’t want to follow the Centers for Disease Control and Prevention immunization schedule.

Zimmerman says the legislation is “the first step in allowing the families and the physicians to work together” to set up individualized schedules. But physicians say that already happens within the constraints of medical best practices—and anything outside that would violate their professional standards.

The Pennsylvania chapter of the American Academy for Pediatrics and doctors interviewed for this story say almost every sentence in the bill is based on misinformation. And regardless of how likely it is the measure would become law, they are concerned legislators are giving voice to anti-science ideas that affect what happens in their exam rooms.

“So for the people who are ambivalent or concerned, this bill gives credence to that false notion that it’s okay to delay vaccines for their children,” said Dr. Gabriel Cisneros, a pediatrician in Pittsburgh who serves as co-chair of the Pa. American Academy for Pediatrics advocacy committee.

What the bill says

The proposal states doctors must allow parents to set their children’s immunization schedules, as long as the child gets one vaccine per year. The CDC recommends more than that for infants and children of certain ages.

It also would prohibit doctors from charging parents for time spent discussing the merits of getting their child immunized.

Insurers would be prevented from financially incentivizing pediatric clinics to follow CDC guidelines.

witf · ‘This is pro-disease’: Pediatricians spurn GOP proposal on immunizations

And, it would ban pediatricians from limiting the hours when they see the children of non-immunization-compliant parents in order to keep those children away from at-risk patients. Those include children with cancer, immunocompromised children and newborns who are not yet vaccinated.

If the bill were made into law, a doctor who failed to follow the rules could be brought up before a medical board for “unprofessional conduct.”

The state’s hospital lobby, insurance lobby and pediatricians’ group all oppose the measure, and Democratic Gov. Tom Wolf’s office said Wolf “has concerns” with the bill, a sign he could veto it.

At Children’s Community Pediatrics, Cisneros said the proposal is rooted in misleading ideas that have no grounding in science—ideas that pose problems for him even if the bill doesn’t pass.

His office requires children to follow the CDC guidelines for getting crucial early immunizations, Cisneros said, and it’s true that pediatricians regularly deal with vaccine-hesitant parents.

However, he and his colleagues have rarely had to turn away a child, because they are able to talk with parents. That would be harder to do if doctors were forced to follow parents’ directives. 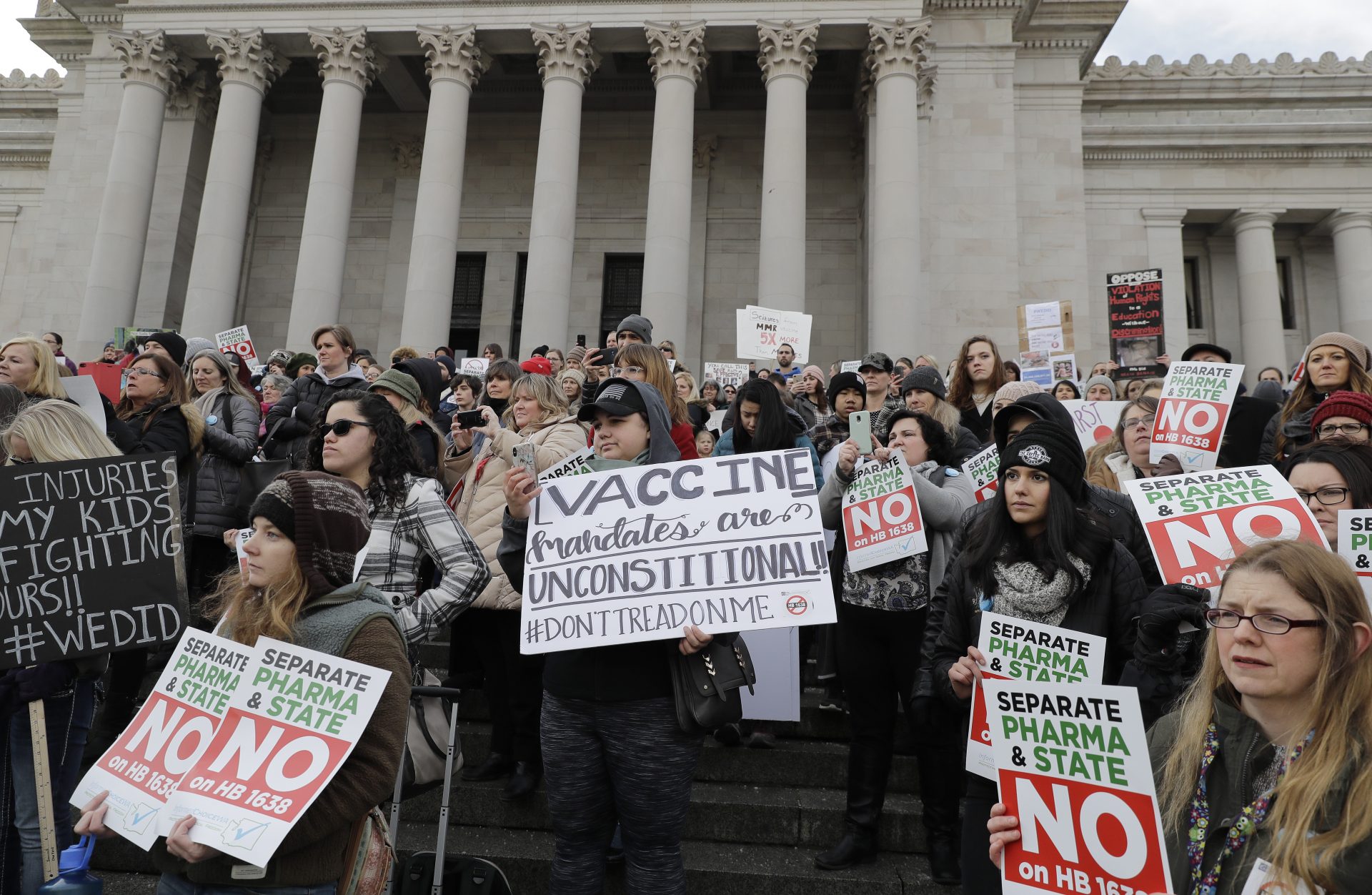 People hold signs at a rally held in opposition to a proposed bill that would remove parents’ ability to claim a philosophical exemption to opt their school-age children out of the combined measles, mumps and rubella vaccine, Friday, Feb. 8, 2019, at the Capitol in Olympia, Wash. Amid a measles outbreak that has sickened people in Washington state and Oregon, lawmakers earlier Friday heard public testimony on the bill. (AP Photo/Ted S. Warren)

A parent’s desire to space out vaccinations is often rooted in online misinformation about the risks of vaccinations, Cisneros said. He said he has a lot of compassion for those families.

However, Cisneros said there’s good reason pediatricians need to be the ones in charge of vaccinations. By failing to immunize children in a timely manner, those children risk contracting and spreading diseases that once killed and sickened thousands of children each year, but which are now easy to prevent.

He said the pediatricians’ academy recommends strengthening vaccination rules to end Pennsylvania’s non-medical exemption, which allows parents to skip their children’s vaccinations based on a strong religious or philosophical belief. Mississippi, West Virginia, California and New York got rid of similar exemptions in recent years, he noted.

“We swore an oath to do no harm and we see that by modifying the schedule in a way that’s not evidence-based is basically providing substandard care and basically a violation of our oath,” Cisneros said.

An ecosystem of misinformation

Across the state in Chadds Ford, Dr. Jonathan Miller, chief of primary care pediatrics and medical director of value based care at Nemours Children’s Health, said legislation like this amounts to the “politicization” of pediatric practices.

“Really the premise of this bill is to support [an] anti-vaccination agenda,” Miller said. “And so it is concerning to me, because we’re in the midst of a pandemic and this is a bill that really promotes the spread of vaccine-preventable diseases.”

Nemours doesn’t turn away children whose parents won’t follow the guidelines, Miller said. However, the group is “strongly pro-immunization” and works to dispel misinformation and educate families.

In contrast, Miller said, the measure is “pro-disease.”

“So, you know, if you’re in favor of measles, this is good legislation for you.”

Pa. Republican lawmakers and the U.S. Capitol attack
As part of WITF’s commitment to standing with facts, and because the Jan. 6 attack on the U.S. Capitol was an attempt to overthrow representative democracy in America, we are marking elected officials’ connections to the insurrection. Read more about this commitment.
State Rep. Kathy Rapp, R-Warren, was one of several dozen state representatives who signed a letter asking Congress to reject electoral vote certification. The election-fraud lie led to the attack on the Capitol.

At Kids Plus pediatrics in Pittsburgh, Dr. Todd Wolynn said those die-hard opponents of vaccinations make up only about one percent of the population, citing a study in Pediatrics.

About another 23% are “vaccine hesitant,” and it’s those people he works hard to win over. He and his colleagues require patients to follow the CDC schedule, but he said there’s enough flexibility built into that schedule to allow them to delay immunizations a few days or weeks to make parents more comfortable.

Wolynn said doctors have a responsibility not to leave patients without options for care. So he can see how in theory, in an area with few pediatricians, a doctor should not be able to deny care to a child. However, he said that scenario is rare and would not be best dealt with through this legislation.

Wolynn said measures such as this one show the outsized influence of anti-vaccination groups—something he knows well.

In 2017, his practice was targeted with online attacks after it ran a public service announcement on Facebook touting the cancer-preventing benefits of getting the human papillomavirus vaccine. Within days, the clinic’s social media sites were flooded with more than 10,000 negative comments from about 800 people around the world, as reported by The Washington Post. He and his colleague Chad Hermann have since become outspoken advocates for how to fight misinformation:

Wolynn said he sees legislation like this as part of a larger ecosystem of misinformation. People post false things online. Others believe them. Eventually, they bring their concerns to politicians.

Zimmerman declined to talk for this story, but states in his memo that he is responding to families’ complaints that they face “irrational anger and scrutiny” from doctors.

“Through my interactions with families, in my district and throughout the state, the demands of doctors over the rights of parents and patients to receive necessary information seems to be the driving cause behind the hesitation of some parents to vaccinate,” Zimmerman states.

His spokeswoman Priscilla Eberly said Zimmerman has also talked to doctors who are concerned about issues raised by the families. But she didn’t respond to requests to speak with one of those doctors.

Wolynn said the vaccine-hesitant parents he talks to genuinely believe what they’ve read online. However, many people who create that misinformation are motivated by profit, power or politics, he said, citing research from the Center for Countering Digital Hate.

“It’s political pandering,” Wolynn said. “It doesn’t matter if you think it’s true or not, if I can get to my base and rally you up by telling you that the government’s coming to take your liberty, and they have no right to tell you what to put in your baby’s body—vote for me.”

Viewed in that way, Wolynn said the fact the bill may not pass into law doesn’t stop it from contributing to the false idea that there is something dangerous about following vaccination schedules.

For Sam Marshall at the Pennsylvania Insurance Federation, it all boils down to that issue: Are lawmakers saying there is something wrong with the CDC vaccination schedule? And if so, where’s the evidence?

Marshall noted that the bill was pushed through the House health committee without testimony from doctors. House Health Chair Kathy Rapp, R-Warren, didn’t respond to requests for comment.

“So far, I haven’t seen anyone point to the vaccination schedule of the CDC and say this is flawed.”

He said the legislation, which his group opposes, would meddle with insurers’ long-standing practice of financially incentivizing pediatricians to follow CDC immunization guidelines.

Marshall said insurance companies do that because they want providers to follow the “best medical standards of care.”