Philadelphia firefighters gather at the entrance to Philadelphia Energy Solutions Refinery, while a large flare burns off fuel to prevent it from feeding the massive fire at the refinery. (Emma Lee/WHYY)

The sweet chemical smell of benzene is something everyone who has filled up a gas tank is familiar with, since it’s present in gasoline. It’s also a common pollutant released as part of the fossil fuel refining process.

Researchers have studied it for almost 100 years, and it’s one of the most dangerous chemicals to breathe, known to cause both leukemia and lymphoma, especially in children.

“It was first studied in industrial workers, people who worked making rubber tires and oil refineries,” said Dr. Philip Landrigan, director of Global Public Health and the Common Good at Boston College. “Those epidemiological studies found that the higher a person’s exposure, the greater the risk of leukemia and lymphoma.”

A recent report released by the Environmental Integrity Project, a nonprofit watchdog group created by former EPA staff, documents the levels at more than a dozen refineries across the country, including PES. It found levels consistently above 9 micrograms per cubic meter, which is what the EPA considers “actionable.” Like PES, the facilities are all in neighborhoods where residents are mostly poor or people of color.

In 2019, the benzene levels at PES averaged 49.1 micrograms per cubic meter, far above the actionable level. In 2020, the levels dropped significantly due to the refinery’s shutdown after an explosion and fire in summer 2019. It’s unclear the exact emissions released during that explosion, but about 3,000 pounds of deadly hydrofluoric acid did escape. Still, the 2020 benzene levels measured along the perimeter averaged 28.1 micrograms per cubic meter, more than three times higher than the actionable level.

“The people living near that refinery have every right to be concerned,” said Landrigan, who is both a pediatrician and epidemiologist trained in occupational and environmental medicine. Benzene is a volatile organic compound, and its presence in the air near refineries indicates other dangerous VOCs such as toluene and xylene could be present as well. 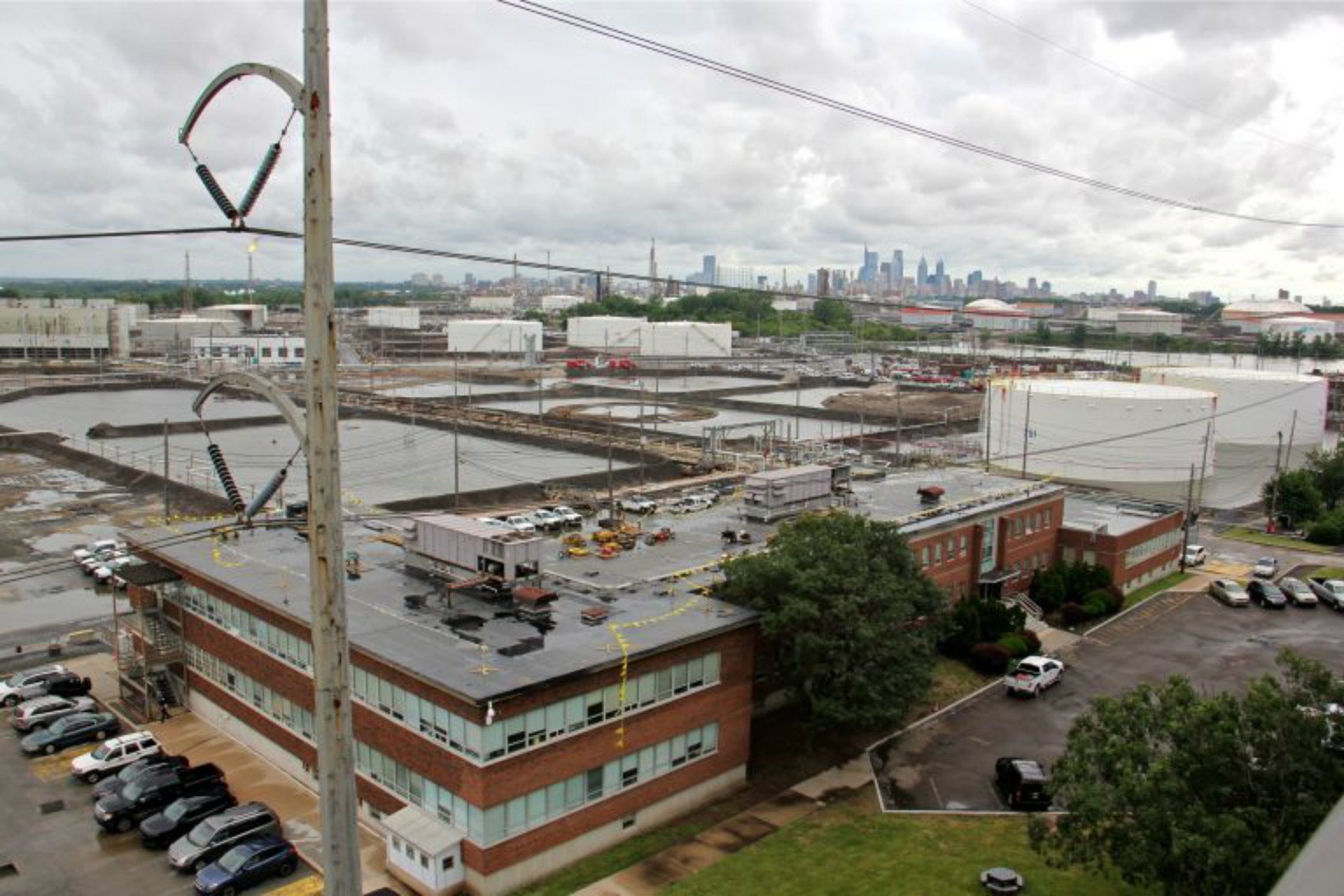 The South Philadelphia refinery’s history dates back to the Civil War era, when it was built as Atlantic Refining Co. Gulf Oil opened a neighboring facility in 1926, and the two operations were bought by Sunoco in 1988 and 1994, respectively.

The complex grew to be the largest refinery on the East Coast and leaves an equally large legacy of pollution, both in the soil and the water table. Facing bankruptcy, Sunoco formed a joint partnership with the Carlyle Group to create Philadelphia Energy Solutions in 2012. The company entered bankruptcy in 2018, but the explosion and fire led to a complete shutdown of the facility in July 2019.

Last summer, Hilco took control with the aim of creating a distribution hub. Sunoco remains responsible for the legacy contamination. But Hilco is now responsible for monitoring and addressing current emissions.

In 2015, Congress authorized the EPA, through the Clean Air Act, to require refineries to measure benzene emissions through fence line monitors starting in 2019, so the data covers only two years. The measurements required by the 2015 Refinery Sector Rule are taken at two-week intervals, and refiners are allowed to subtract what are considered “background levels,” or those lowest average readings. The fence line monitoring of emissions will continue even though the facility no longer operates as a refinery, because it is still permitted as a refinery and a major source of air pollution under the federal Clean Air Act.

The readings at PES actually peaked in early 2020, after the refinery’s shutdown but during its dismantlement, which continues today. Benzene emissions averaged 128 and 189 micrograms per cubic meter in the first two weeks of January 2020, and 189 the first two weeks of February 2020. One of the monitors detected an 80 microgram average in late July 2020.

In a 2019 report to the EPA submitted just one week before the explosion that precipitated the shutdown, PES attributed the emissions to issues at the tank farm as well as an offsite gasoline spill into the Schuylkill River.

When asked questions about the releases, and the current status of the dismantlement, a spokesperson for Sunoco referred all comments to Hilco Redevelopment Partners, the company that purchased the site out of bankruptcy in June 2020. A Hilco representative said the company was not able to respond to questions by deadline, but echoed statements by the EPA and the Philadelphia Department of Public Health that the benzene releases measured at the fence line do not indicate health impacts for the surrounding neighborhoods.

The actionable benzene level, set by the EPA at 9 ug/m3 (micrograms per cubic meter), was established as a way to measure whether refineries are in compliance with the agency’s Maximum Achievable Control Technology standards, according to EPA Region 3 spokesperson Terri White. If the yearly average is above that mark, a refinery company needs to conduct a root-cause analysis.

“This level does not correlate to any particular metric associated with risk,” the EPA’s White wrote in an email.

“Any exposure, even the smallest exposure, increases risk,” he said. “And that’s especially true for children. EPA standards are always a balance between what is ideal, which in this case is zero exposure, and what the EPA regulators think is feasible. So standards don’t convey absolute safety.”

EPA’s White said that the fence line measurements are not an indication of individual exposure, and that weather plays a large role in determining the impact.

“It is important to note that benzene concentration levels monitored at the perimeter of refineries do not reflect benzene levels in the community,” White said. “Rather, the monitoring data, and in particular, the annual average difference between upwind and downwind monitoring values is an indicator of the benzene emissions from facilities.”

Similarly, James Garrow, a spokesperson for the Philadelphia Health Department, said levels measured at the city’s own air monitor at 24th and Ritner streets “have never approached a level that would harm the public health.”

Garrow said measurements taken from that monitor, which samples air every six days, were far below both the actionable level and those measured at the fence line of the facility. The city’s monitor at 24th and Ritner streets detected benzene at an average of 1.79 ug/m3 in 2019, and 1.73 ug/m3 in 2020.

“It is impossible to tie the emissions measured by the fence line monitors to PES,” Garrow wrote in an email. “There are a variety of industrial sites and highways in the area, all of which produce benzene emissions.”

Pete DeCarlo, an air pollution expert and associate professor at Johns Hopkins University, questioned the data coming from the 24th and Ritner monitor since it’s not necessarily in the ideal downwind location. And he questioned the city’s commitment to finding the source of the fence line emissions, saying they are too high to be stemming from traffic on the Schuylkill Expressway.

“Nearby highways would not produce consistently high levels of benzene for a two-week integrated measurement at the fence line,” DeCarlo said. “The small stretch of highway adjacent to the refinery is not responsible for the elevated benzene concentrations measured at the fence line of the former PES refinery.”

Neighbors of the refinery complex complained for years about bad odors and emissions that they linked to high rates of cancer among residents. And they say those smells continue to this day.

“It’s infuriating that the city is still trying to hide behind the measurements of this one monitor at 24th and Ritner,” said Alexa Ross, of the environmental justice group Philly Thrive.

“This site is 1,300 acres, it’s so large, and this is the same monitor that wasn’t measuring anything the day of the [PES refinery] explosion,” Ross said. “We’re seeing the city making moves to expand air monitoring, and that’s encouraging. But to rely on these numbers, it’s just unsound science when it’s people’s health and lives on the line.”

Ilan Levin, associate director of the Environmental Integrity Project, said he is not surprised residents still smell toxic chemicals almost two years after the refinery shut down. Some of that could be occurring in the process of dismantling the site.

“It’s very common around refinery communities to get these smells, so it gets into the air there,” Levin said. “Benzene leaks from valves and flanges throughout the thousands of miles of pipes. It leaks from tanks, many of which are old. And sometimes there are accidents where we get these leaks and spikes.”

Levin said the presence of benzene also indicates other potentially harmful emissions, like toluene, ethylbenzene, and xylene also referred to as BTEX. Enforcement is key, he said, but that’s not happening as much as it should.

“A big part of what EPA’s enforcement authority is, is not just issuing penalties and fines,” he said. “But they actually are allowed to investigate and inspect and gather data.”

That’s exactly what the EPA says it is doing. The agency says it works closely with the city, which enforces the Clean Air Act through the Health Department’s Air Management Services.

As a result of the detection of benzene above actionable levels in 2019, then-owner Philadelphia Energy Solutions submitted a Root Cause Analysis and Corrective Action Plan to the EPA. It details five separate monitoring stations where high levels were detected, and pointed to a facility west of the refinery where gasoline had spilled into the soil and the Schuylkill River.

The report does not indicate how much gasoline flowed into the river, or the source of the spill. The on-site sources included benzene storage tanks, benzene railcar-unloading areas, oil tanks, separators that removed solids from the refined products, and wastewater processing.

Remediation included retraining for workers, fixing the seals on tanks and separators, additional monitoring, additional scrubbers for vacuum trucks that emptied the tanks, and talks with the unnamed neighboring facility that discharged gasoline into the Schuylkill River. Because the benzene tanks and railcar facilities are not considered part of the refining operation, and the rule exempts those emissions, they were subtracted from the total.

In October 2020, the EPA followed up with more extensive air monitoring, including at the partly dismantled tank farm. The goal, as stated in EPA’s report on the sampling, was to collect more data to pinpoint current sources of benzene. But the report says that “the data is not useful for assessing area-wide ambient concentrations.”

The air samples collected in the one-day survey found benzene, as well as BTEX, at several sites, all of which were below about 36 micrograms per cubic meter. That’s lower than the 2019 levels measured while the facility still operated. The largest amount of VOCs stemmed from several areas at the tank farm, including an excavated pipeline. DeCarlo said additional measurements are needed to determine whether the leaks have continued.

Philly Thrive’s Ross said the group hasn’t been able to determine what is currently happening at the site.

“At the start of the relationship with Hilco, we were optimistic,” she said. “Hilco clearly cared more than PES did about public image. And since every single person [in the vicinity of or downwind of the refinery] could have lost their lives in the explosion, we thought there was finally some political traction around how dangerous this site is. But things haven’t changed that much.”