Cornell Brunson describes the difficulties he had trying to collect Unemployment Compensation benefits. He was speaking May 6, 2021 at a rally outside of Gov. Tom Wolf's regional office in Pittsburgh.

With hundreds of thousands of backlogged claims, advocates say Pa. unemployment system upgrade could cause problems 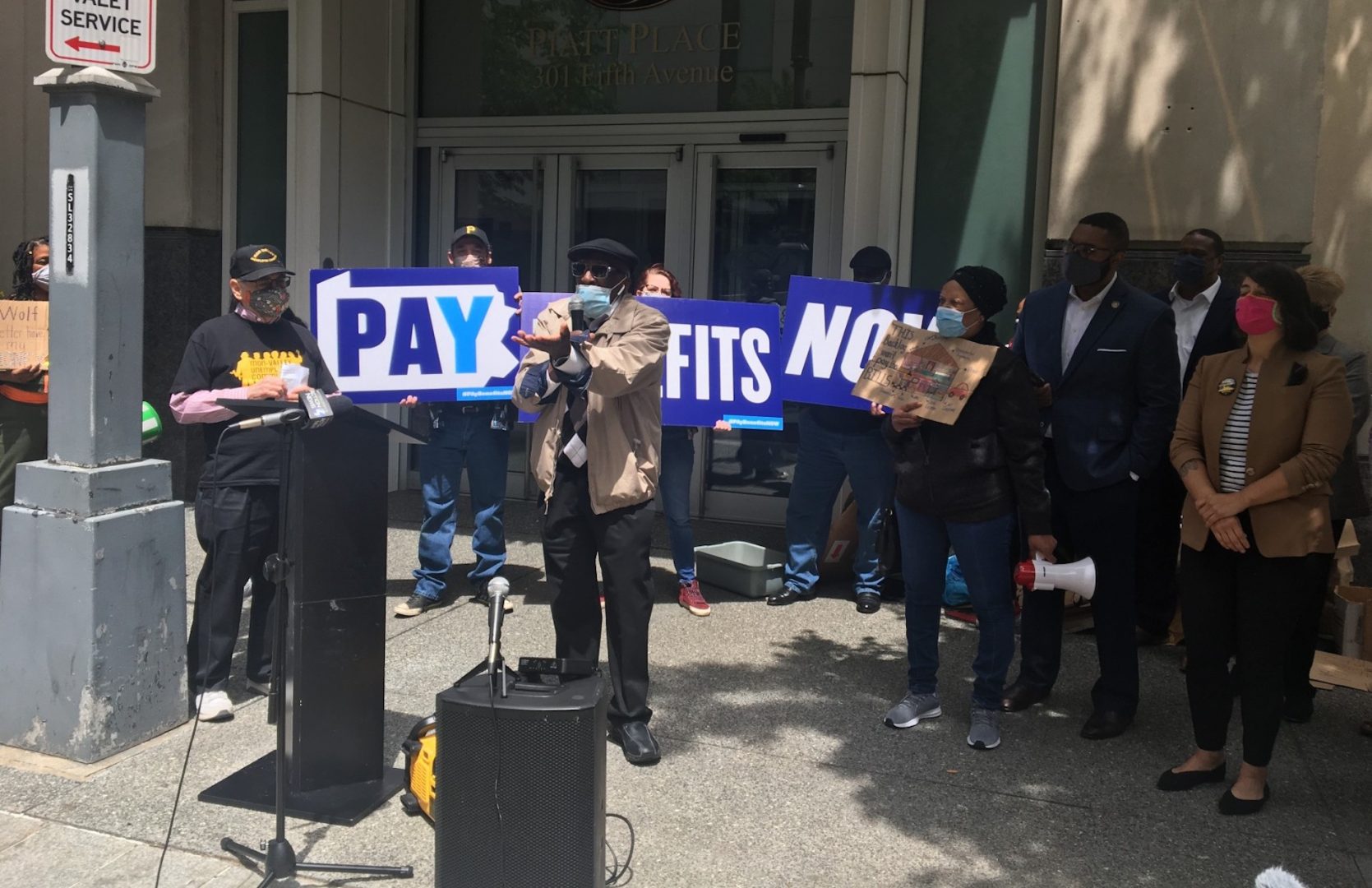 Cornell Brunson describes the difficulties he had trying to collect Unemployment Compensation benefits. He was speaking May 6, 2021 at a rally outside of Gov. Tom Wolf's regional office in Pittsburgh.

(Pittsburgh) — Protesters, including a number of Democratic state lawmakers, called on Gov. Tom Wolf Thursday to pay unemployment benefits to hundreds of thousands of Pennsylvanians who have been left without support for months as their claims languish in a growing backlog.

The protests – in Pittsburgh and Philadelphia – came a day after other advocates called on the Pennsylvania Department of Labor and Industry to postpone its upcoming plans to modernize the computer system that handles unemployment claims until later in the year, when fewer people are collecting unemployment, for a smoother transition.

“We have paid into the system. We are not asking for something that doesn’t belong to us. We have given into the system. We have worked all our lives for these benefits,” said Rev. Cornell Brunson, speaking to the crowd in Pittsburgh about his struggle to collect benefits, one of several speakers who gave emotional testimonies about the difficulties they faced.

“I’m sorry that government has failed and it’s continued to fail you,” State Rep. Austin Davis told the crowd.

Several state lawmakers placed the blame for system underfunding on Republican legislators, though several also called on Wolf, a Democrat, to make sure people get paid.

“I am here to ask the governor to help us to free up this money, to get people the money that they deserve and to do it now,” said state Rep. Emily Kinkead. 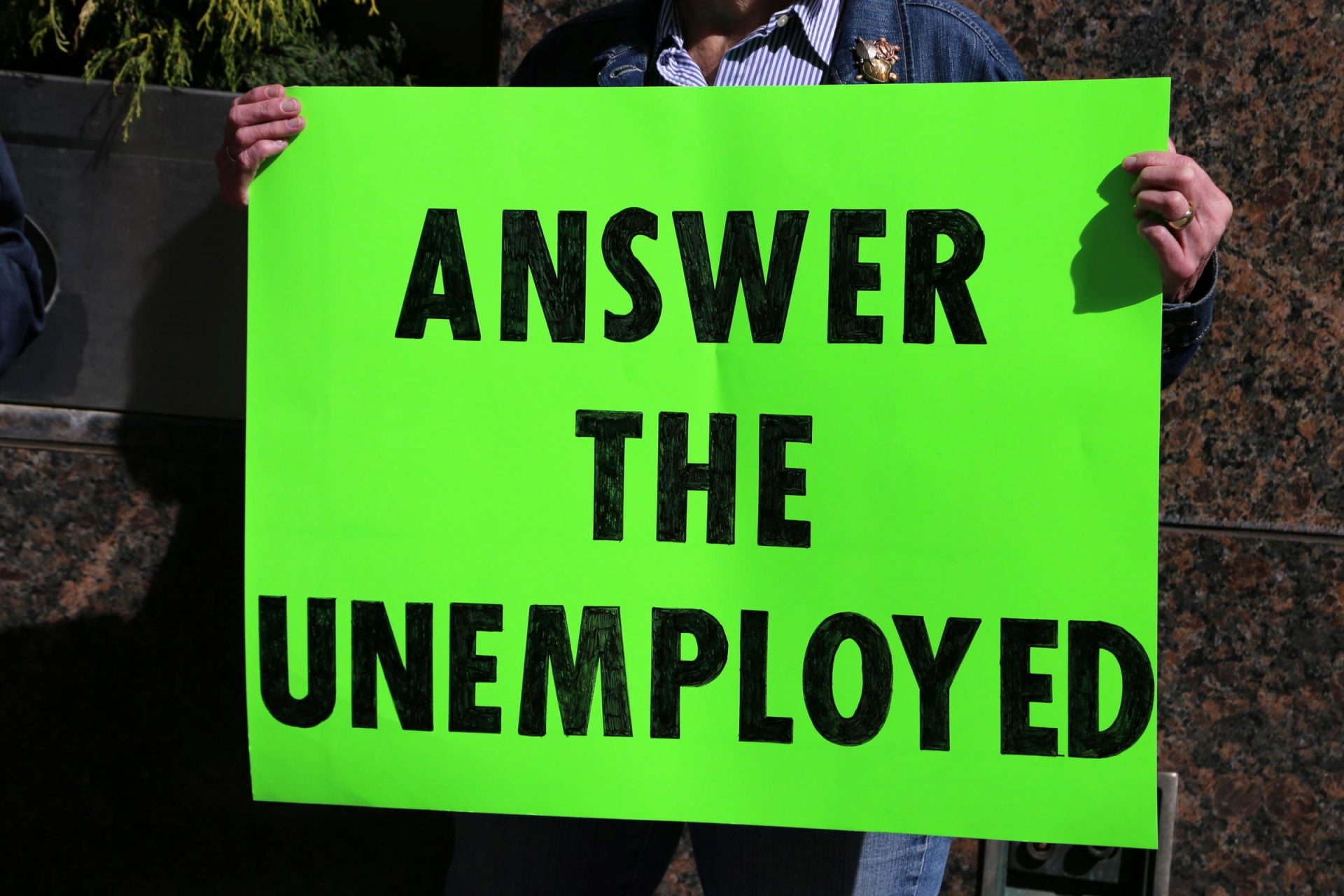 A demonstrator holds a sign about unemployment compensation and the frustrating process many claimants have faced over the past year during a rally downtown on March 10, 2021.

A new computer system for unemployment is set to launch June 8, after more than a decade of delays. The current system will start to shut down to claimants on May 30 as part of a “blackout” period during the transition between two systems.

But there’s no need to switch to the new system now, said Sharon Dietrich, litigation director for Community Legal Services of Philadelphia. On Wednesday, Dietrich urged the state’s Benefit Modernization Advisory Committee to hold off on the changeover until September.

“While many of the changes will be positive, rushing implementation of this system now makes no sense, especially when there is no deadline by which it needs to be done,” Dietrich wrote in a letter to the committee. She argued the agency should postpone implementation of the new system until at least September, when unemployment will hopefully be much lower.

The state’s unemployment rate is still high at 7.3%, and more than one million Pennsylvanians are receiving unemployment benefits, she said.

“If even 10% of recipients cannot obtain or locate passwords or manage the new software without help (a very conservative estimate), the strain on an already overtaxed system will be immense,” Dietrich said in a letter.

“The more people on the system at the time this goes live, the more hardship,” she told the committee on Wednesday.

Among other reasons to put off such a big change – the “blackout period” while the systems are transitioning that will halt all activity for claimants; it will divert the state from fixing other problems in the existing Unemployment Compensation and Pandemic Unemployment Assistance systems; as well as the lack of community education on the new system, she said.

The department said the change will represent a major upgrade and faster claims processing. 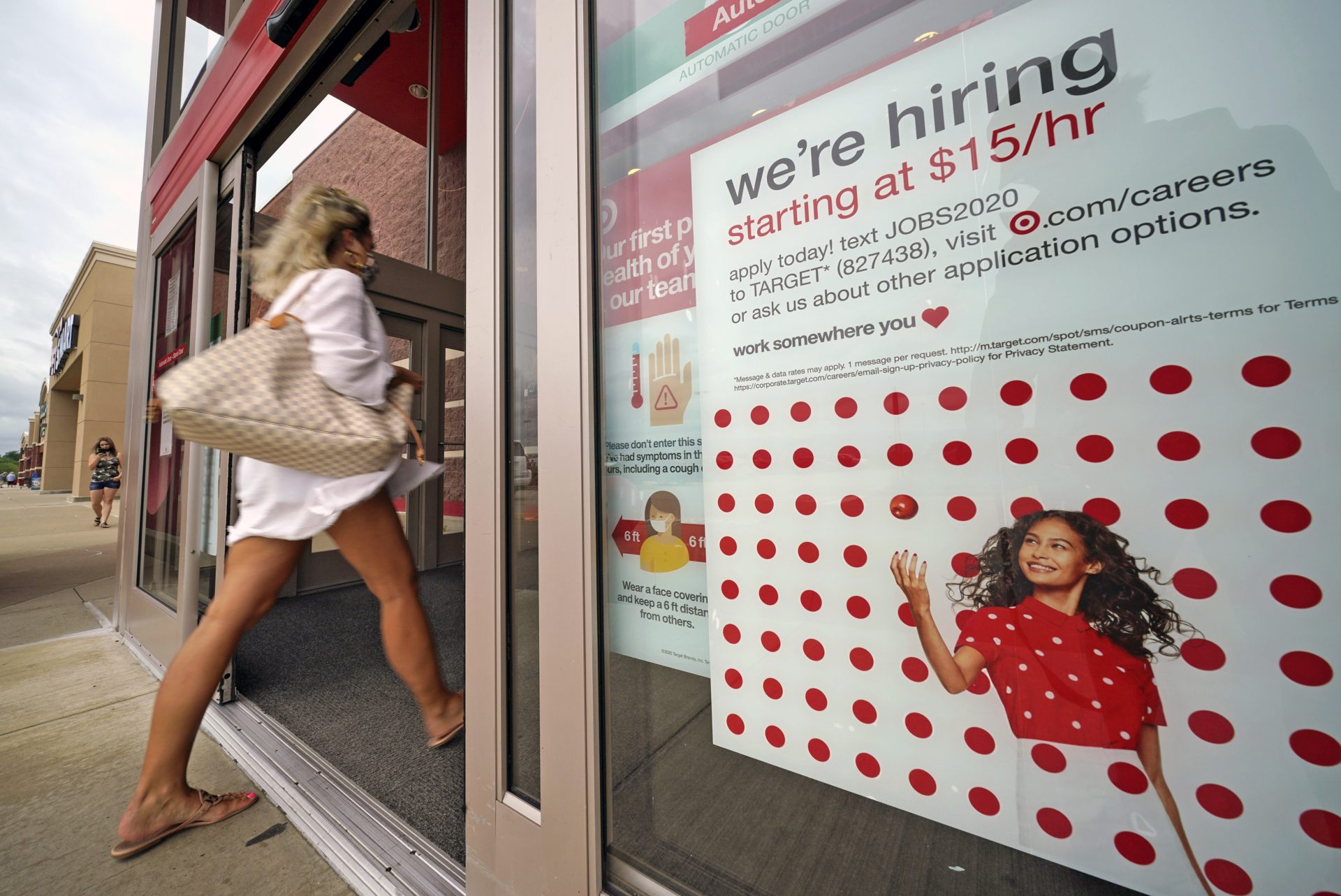 In this Sept. 2, 2020, file photo, a help wanted sign hangs on the door of a Target store in Uniontown, Pa. The government issues the jobs report Friday, Sept. 4, for August at a time of continuing layoffs and high unemployment.

“The outdated mainframe used to process Unemployment Compensation claims is difficult for claimants to use and is slow for our staff,” said Sarah DeSantis, a spokesperson for the Department of Labor and Industry. “The new unemployment compensation system will simplify filing for everyone – that means less confusion and less frustration. Claimants will have a better understanding of the status of their claim, better access to staff members through the messaging center, and a better overall experience. And, most importantly, the system will be faster and easier to use for our staff, which means claims will be processed more quickly.”

Waiting again until this fall means the agency “risk[s] needing to change or extend federal programs on the antiquated system.”

Thursday’s protest was not the first time demonstrators have shown up outside Gov. Wolf’s regional office to demand the state fix the problems with its overburdened unemployment system. Previous demonstrations have demanded the Department of Labor and Industry hire more staff to answer the phones, which is still a problem more than a year into the pandemic, and that the department pay the backlog of claimants still awaiting a determination.

The agency disputed that all 289,000 claims in the backlog are legitimate, and said it believes some of them are fraudulent.

The department also announced on Thursday that additional customer service staff will start working on Monday.

Laura Benshoff of WHYY contributed to this report.