Wind-blown soil fills a ditch between a road and the fields of Gunsmoke Farms, a large organic farm northwest of Pierre, S.D., in early March.

Hardly a week goes by, it seems, without a big food company making promises to deliver products from green, sustainable farms. Turning those promises into reality, though, can be complicated.

Take Gunsmoke Farms, a vast property that covers 53 square miles just northwest of Pierre, S.D. The food company General Mills, maker of Cheerios, announced in 2018 that it would convert the farm to organic production. The company planned to turn it into an educational hub to teach other farmers “how to implement organic and regenerative agriculture practices.”

Now, some of Gunsmoke Farms’ neighbors say that the farm is doing more environmental harm than good.

Among the critics is Dwayne Beck, a soil scientist who manages South Dakota State University’s Dakota Lakes Research Station, 40 miles east of Gunsmoke Farms. Beck was skeptical about the project from the beginning. “It scared me, because normally organic [farming] entails lots of tillage, and those soils are very fragile,” he said.

Farmers often till the soil — breaking it up with tools such as chisel plows or disks — to uproot weeds and get land ready for planting. But tillage also tears soil loose from the plant roots that help hold it together and also breaks down parts of the soil that are most rich in carbon and nutrients.

This is especially true of soils where Gunsmoke Farms is located, Beck said. The area developed from an ancient ocean floor, and the soil is full of clay. “Once you disturb it, nothing holds that soil together. It just turns into powder,” he said, vulnerable to rain or wind that can carry it away.

Those dust storms happen less often now because over the past two decades, many farmers in the region abandoned regular tillage. They now use planting equipment that slices into undisturbed soil and places seed in the ground.

To control weeds, these farmers use herbicides. But chemical weed control isn’t an option for an organic business such as Gunsmoke Farms.

During the farm’s three-year transition to organic status, its managers grew primarily alfalfa, which doesn’t require annual planting. In 2020, though, they planted their first crops of wheat and peas, which involved tilling the enormous fields.

Months later, Beck said his fears were realized. He collected photographs of the damage: small drifts of wind-blown soil in a roadside ditch, and a country road that disappears into a brown cloud of blowing dust. “The soil that blew out of there, it will never be the same as it was before it blew,” he said. It won’t have the stability and structure of healthy soil, held in place by the roots of plants. 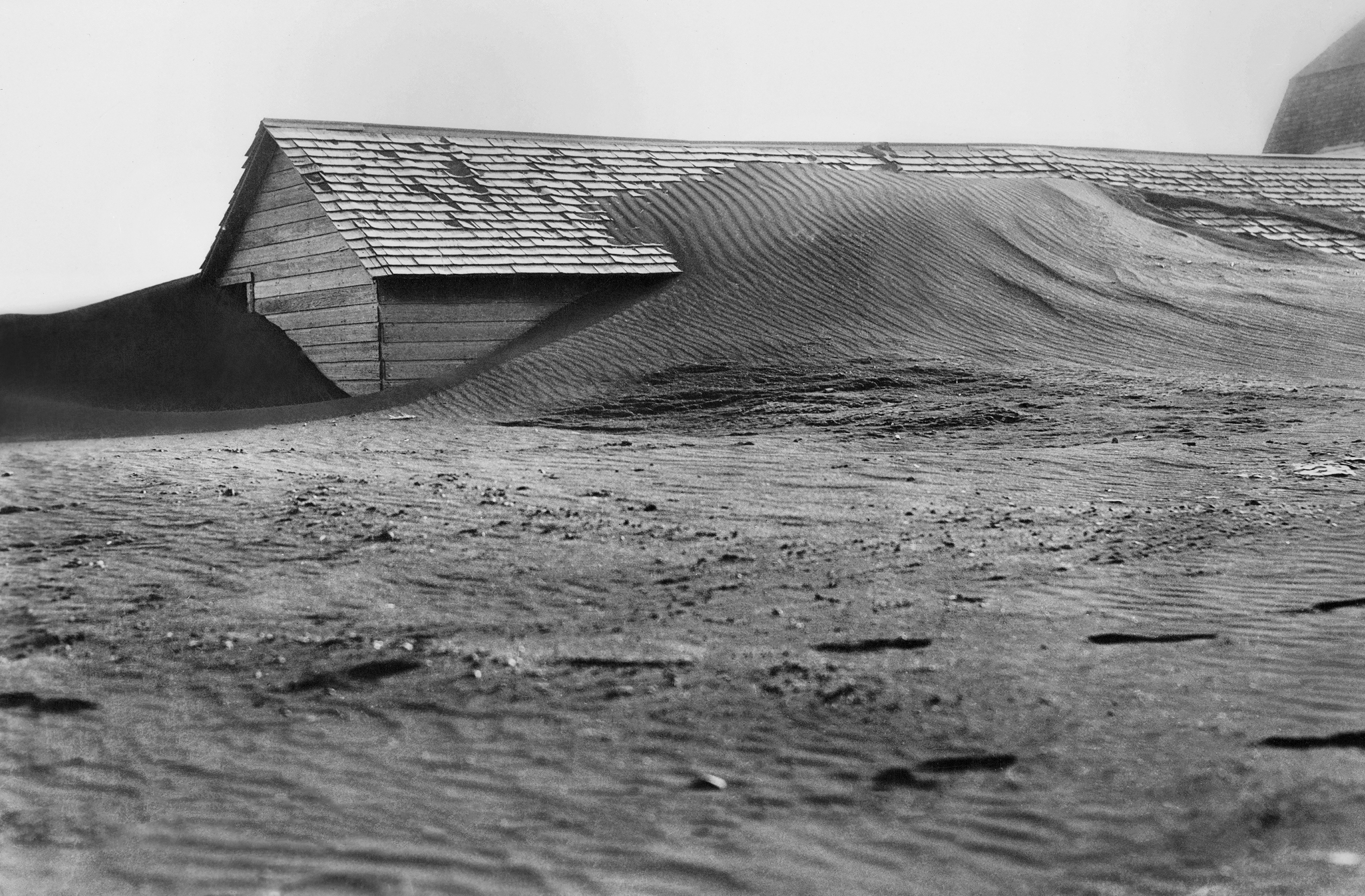 South Dakota was one of the places that saw severe soil erosion from wind during the Dust Bowl of the 1930s. (Universal History Archive/Universal Images Group via Getty Images)

Beck and others who live near Gunsmoke Farms said that nonorganic farmers also struggled to control soil erosion in 2020 because of drought and high winds. But the problems at Gunsmoke, they said, were worse. A planting of winter wheat, which was supposed to protect the soil on those fields, failed to grow well.

When the Gunsmoke project was just getting off the ground, in 2018, an expert from the U.S. Department of Agriculture’s Natural Resources Conservation Service drew up a soil conservation plan for the farm. That plan called for wide strips of native grasses across the farm to help prevent soil from blowing, and for the steepest slopes to stay covered, most years, with crops such as alfalfa that don’t require annual planting.

Gary Zimmer, an expert on organic farming who collaborated with General Mills in launching the Gunsmoke project, said that he drew up a plan that incorporated many of these measures. But he said much of his plan was never implemented.

“It’s in a deep hole,” Zimmer said, referring to the farm. “I don’t know how you get it back out organically. It’s hard to farm organically if you do it really well, and have your intensive management. But 30,000 acres, poorly managed, is a really good sign for failure.”

General Mills doesn’t own Gunsmoke Farms or control it directly. It signed a “strategic sourcing agreement” with an investment firm called TPG, an early investor in Uber, which acquired the land to supply General Mills with organic wheat, peas and other crops. TPG then spun off another firm, Sixth Street, which currently owns Gunsmoke. The investors have hired a series of managers to run the farm.

General Mills said in a statement to NPR that turning Gunsmoke Farms into a thriving ecosystem “is a journey” and promised continued efforts to minimize erosion and improve soil health there.

Sixth Street Partners said in its statement that the farm is “early in the process of regenerating land” and that its mission — organic farming — also provides additional environmental benefits, such as lower use of pesticides and synthetic fertilizer.

Ruth Beck, who’s married to Dwayne Beck, spent many years as an extension agronomist with South Dakota State University, advising farmers in the area around Gunsmoke Farms. She said it’s simply difficult to grow crops organically, on a large scale, in this semi-arid part of the country. “You know, we’ve got to figure out ways to do that, if that’s what people want,” she said. “But we aren’t there yet.”

At Gunsmoke, she said, environmental marketing got ahead of what farmers can actually do.