A bike is pictured at an overlook just before Ohiopyle.

The rules of the Crush the Commonwealth ride are simple, yet extreme: Meet at Point State Park in Pittsburgh, be there for a 5 a.m. start, and then “ride yer damn bike.”

(Philadelphia) — Depending on the route, it takes more than five hours to drive from Pittsburgh to Philadelphia. Now imagine making that trip on a bicycle. Over the weekend, a group of 25 riders attempted to do just that.

The rules of the Crush the Commonwealth ride are simple, yet extreme: Meet at Point State Park in Pittsburgh, be there for a 5 a.m. start, and then “ride yer damn bike.”

Since 2005, the annual 380.3-mile ride has taken cyclists from Pittsburgh to Philadelphia in odd years and back the other direction in even ones. The 2020 event was canceled thanks to the coronavirus pandemic, so there was a just-let-me-pedal mentality amongst the riders this year. 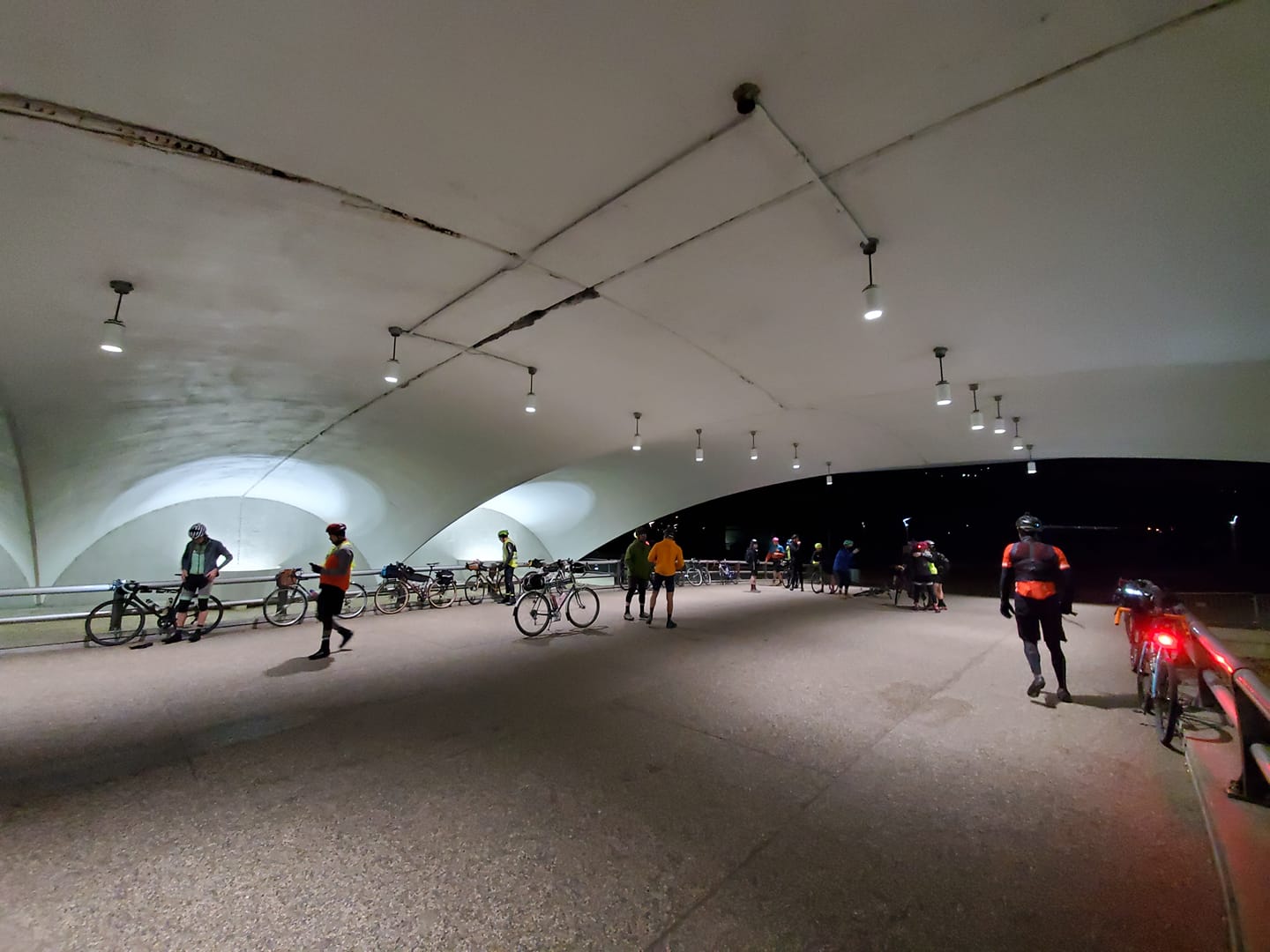 “I’m going to go do it — even if it takes me all weekend,” said Ronald Anderson, an endurance cyclist and one of several riders who agreed to share dispatches from the journey with Keystone Crossroads, starting on Friday morning.

“4:57 am. Pittsburgh, Pennsylvania. Point State Park. We’re under the interstate bridge. We’ve got a good 25 riders rolling around here. Ready to go. Crush the Commonwealth 2021. No rain, that’s a plus. Fair temperatures. Lots of nervous energy around here. Everybody ready to go.”
This is Anderson’s second CTC ride. In 2014, he completed it in 49 hours. The recently retired UPS driver from Trenton, New Jersey, reported that this year, he’s keeping his plans fluid because he hasn’t been training consistently. 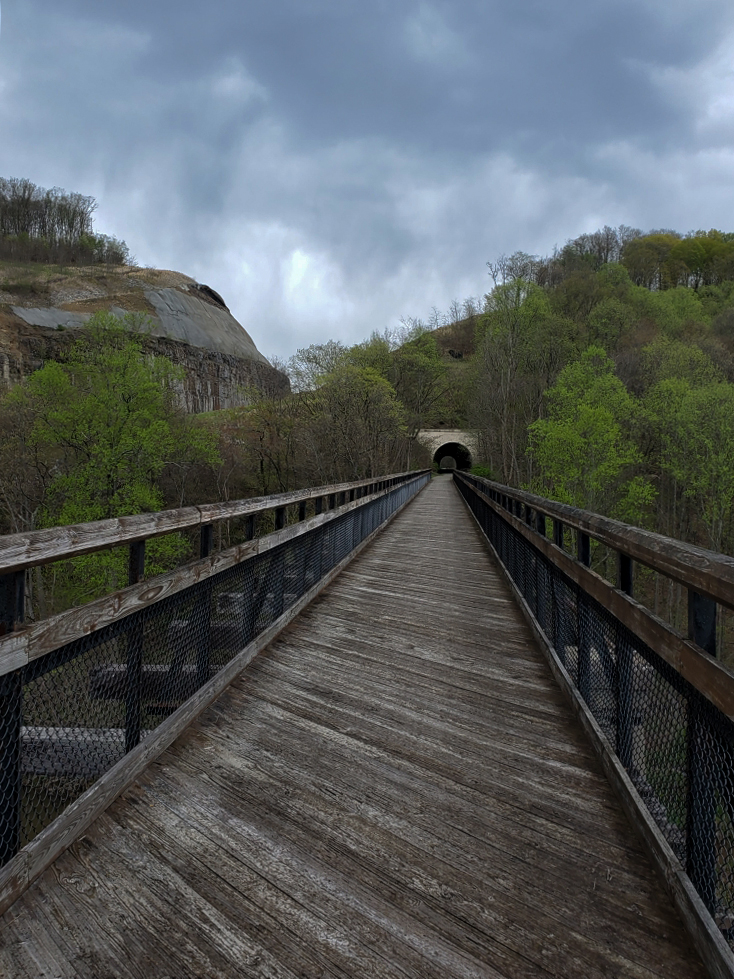 “It’s a beautiful way to see the state,” said Rachel Weaver, an avid cyclist from Pittsburgh who is also on her second CTC attempt. “It’s stunning … Going through the mountains around Somerset, the abandoned turnpike tunnel is very fun.”

Cyclists ride along the crushed limestone of the Great Allegheny Passage (GAP). They pass through small towns along PennDot Bicycle route S. They traverse along the eerie abandoned Pennsylvania Turnpike near Breezewood before climbing over the Allegheny Mountain Range. They refuel and shelter or sleep at too many Sheetz locations to keep track of.

“I wasn’t entirely sure if I was going to do it until about two and a half weeks ago,” said Cris Forelli, who is originally from Honesdale and now lives in Pittsburgh and started cycling during the pandemic as a distraction from being unemployed. “I hope my bike survives, but I’m super excited for it.”

Those fair temperatures that Anderson referred to at 4:57 a.m. Friday did not last.

“I’m coming into the outskirts of Somerset now in a chilly, steady rain. Delightful. The next 40 miles from Somerset, New Bedford are probably the hardest on the route.”

One of the most difficult stretches is along the GAP, where the trail is level and there is no coasting to spare tired legs. If it’s even a little wet, it can feel like pedaling through peanut butter, which is what Weaver experienced.

“I am at mile 105 in Rockwood. I’m getting off the GAP and onto real roads. Got hailed on twice in the last five miles, 10 miles, rained on, winds. It’s been a little bit miserable. There’s a Sheetz coming up at mile 116. I’m looking forward to some cheeseburgers when I get there.”

Unfortunately, 90 minutes later, Weaver was behind schedule and decided to pack it in.

“There is no way I can make it to Chambersburg by 9 p.m. at this point and I don’t ride at night by myself … Not disappointed. It’s OK. I rode 116 miles, so that was good. But this is twice now that I haven’t been able to complete the ride from Pittsburgh to Philly, so I will be trying again in two years. 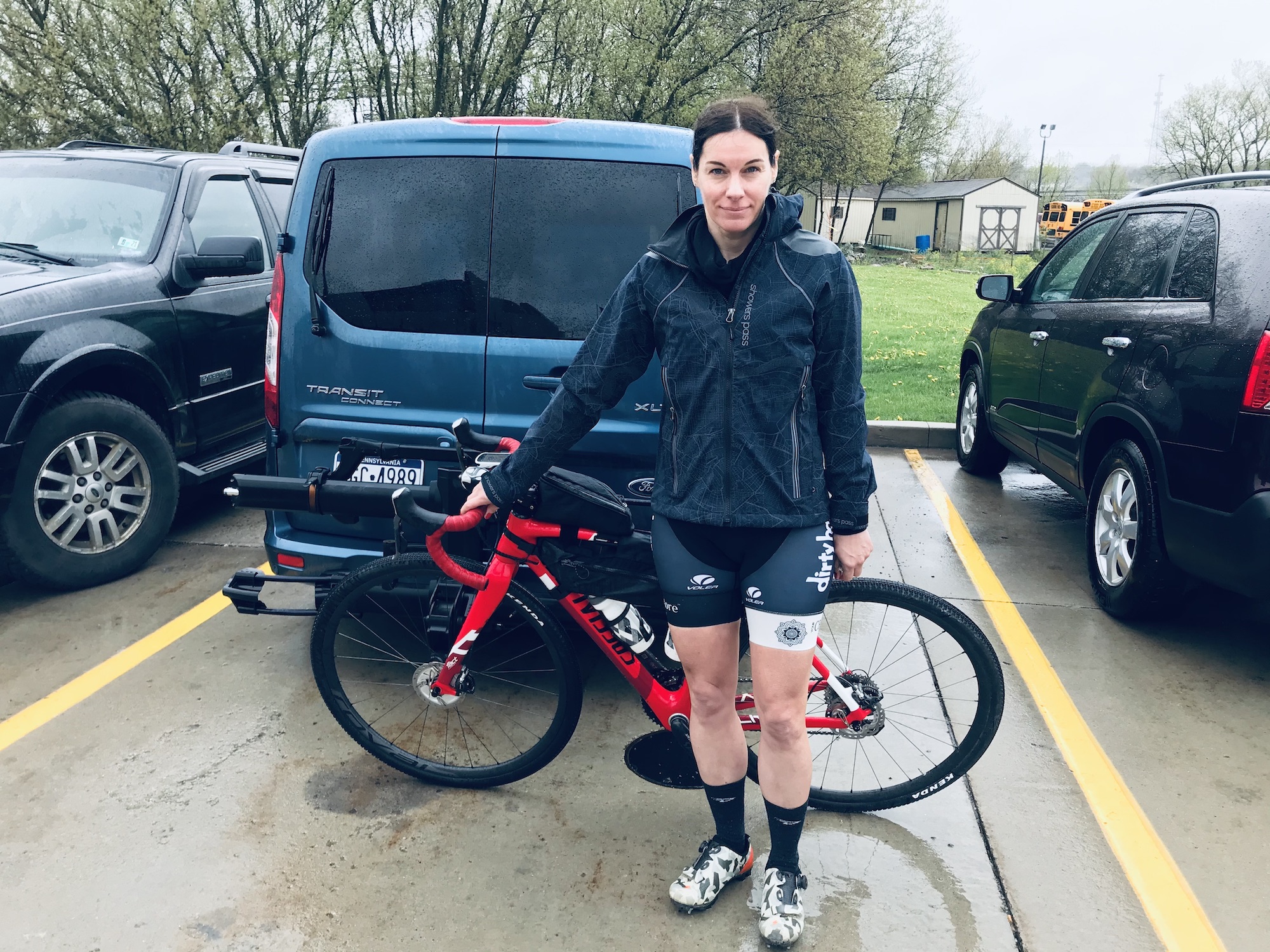 A sad Rachel Weaver is pictured with her bike. (Pat Clair)

The weather impacted Forelli, too. He soon realized he would have to forgo his dream of a 30-hour finish time for a more leisurely ride, but then on Saturday, at the abandoned Pennsylvania Turnpike tunnel, it was “the end of the line.” After 185 miles, knee pain sidelined him. But he also says he’ll be back.

“Events like this motivate me more to do it next time, and I’ve learned many lessons to actually crush it next year,” he said in a text.

Anderson was still out there pedaling.

“This ride is starting to kick my butt. I got a little bit worn out mentally and physically at the end miles on the GAP trail. Then a couple of hours of cold rain around Somerset and some trafficky 55 mile-an-hour roads. Thank goodness the sun is back out now and I’m making pretty decent time with this tailwind on some relatively flat roads. Got about 30 miles to a warm bed in Breezewood. Talk about motivation.”

The CTC ride is the brainchild of three cyclists in Pittsburgh: Michael Brown, Carol Clemens, and Eric McKeegan. In 2005, they planned to find a dirt road course in the northern part of the state, but as McKeegan remembers, “the logistics would have been tremendous.” So the three turned to paper maps to find an alternative endurance ride.

“We realized that the Pennsylvania bicycle route S traveled all the way across the state in the southern part and from Pittsburgh, there was a relatively easy route using the GAP trail, which is the Great Allegheny Passage down to route S and then across the state,” says McKeegan. “And then there’s the Schuylkill trail that takes you right into downtown Philadelphia, and you’re able to get to the Liberty Bell from there.”

They thought they were onto something that could really work. 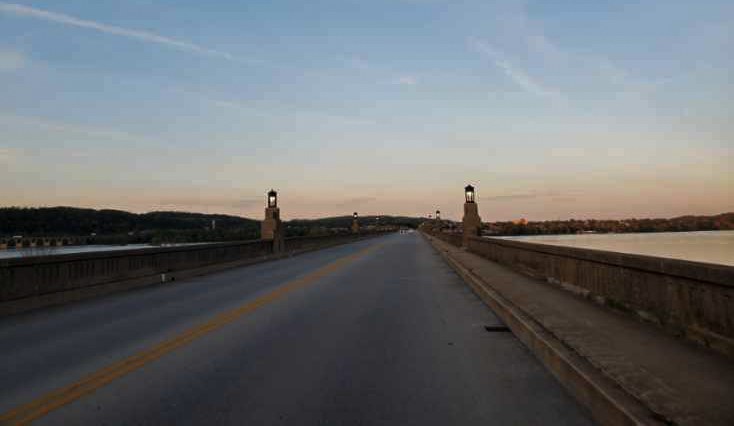 The ride started developing a small but passionate following. People kept lining up at the starting line in late April or early May.

Crush the Commonwealth welcomes all riders. There are some like Anderson who travel at a comfortable pace and stop to sleep and eat complete meals. Then there is another group that goes all out trying to set a new course record. So while Anderson was sleeping, other riders climbed gently up Cowan’s Gap through the state park and over to Chambersburg. From there to Valley Forge, it’s a less arduous route. 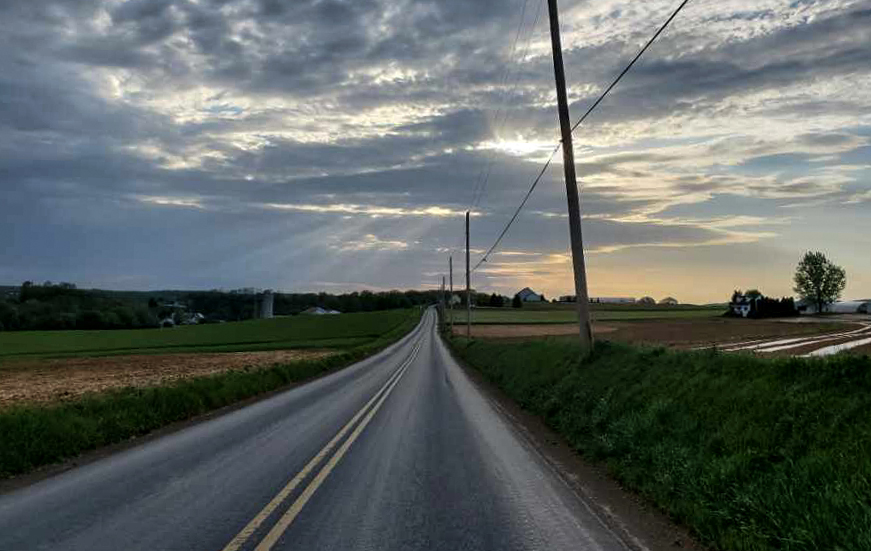 In 2009, Dan Blumenfeld got wind of the ride and decided to do it solo.

“I was delighted to find that after the first 18 hours or so of more or less endless climbing, the rest of the ride is mostly downhill,” said Blumenfeld, who is sitting out this year’s trek.

That first year, Blumenfeld was the first to arrive at the Liberty Bell, even after taking an unfortunate wrong turn on his way into the city along the Schuylkill River. Pulling into a quiet Philadelphia, the no registration, no support, no real rules, and no prizes nature of the CTC hit home. Would anyone know of his accomplishment? 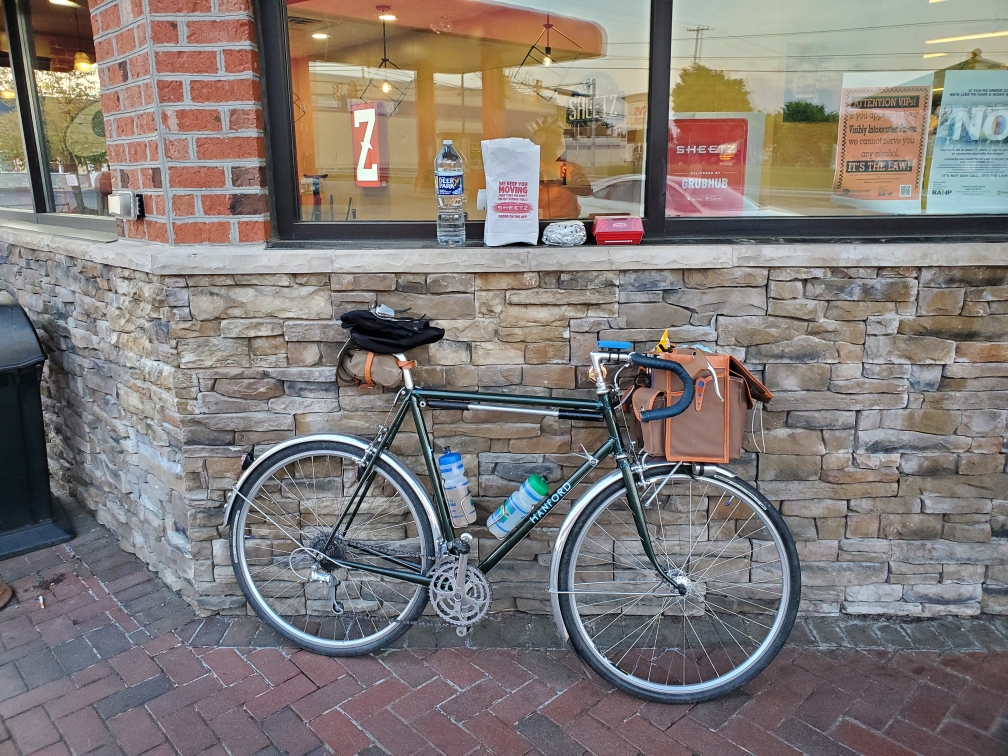 A bike is pictured outside Sheetz in New Holland, Pennsylvania. (Ron Anderson)

“I think maybe five people counting my mother knew, so I wouldn’t say there is much in the way of bragging rights,” he said. “But it’s something that’s been in my mind ever since.”

Steve Gergely set a new course record this year, becoming the first-ever CTC rider to complete it in less than 24 hours.

“What a ride — what a tough ride! I am glad I came out and did this, I’m super happy I finished, but I’m also really super happy to get off this bike. I am profoundly tired and I’ve got a sore knee. I think a shower and a few adult beverages are in my near future.”