Are Pa.’s state House and Senate maps gerrymandered? Depends on how you measure them.

Gerrymandering — when a map’s district boundaries are manipulated to benefit one political party over another — is often used to describe any number of abuses that occur in redistricting. 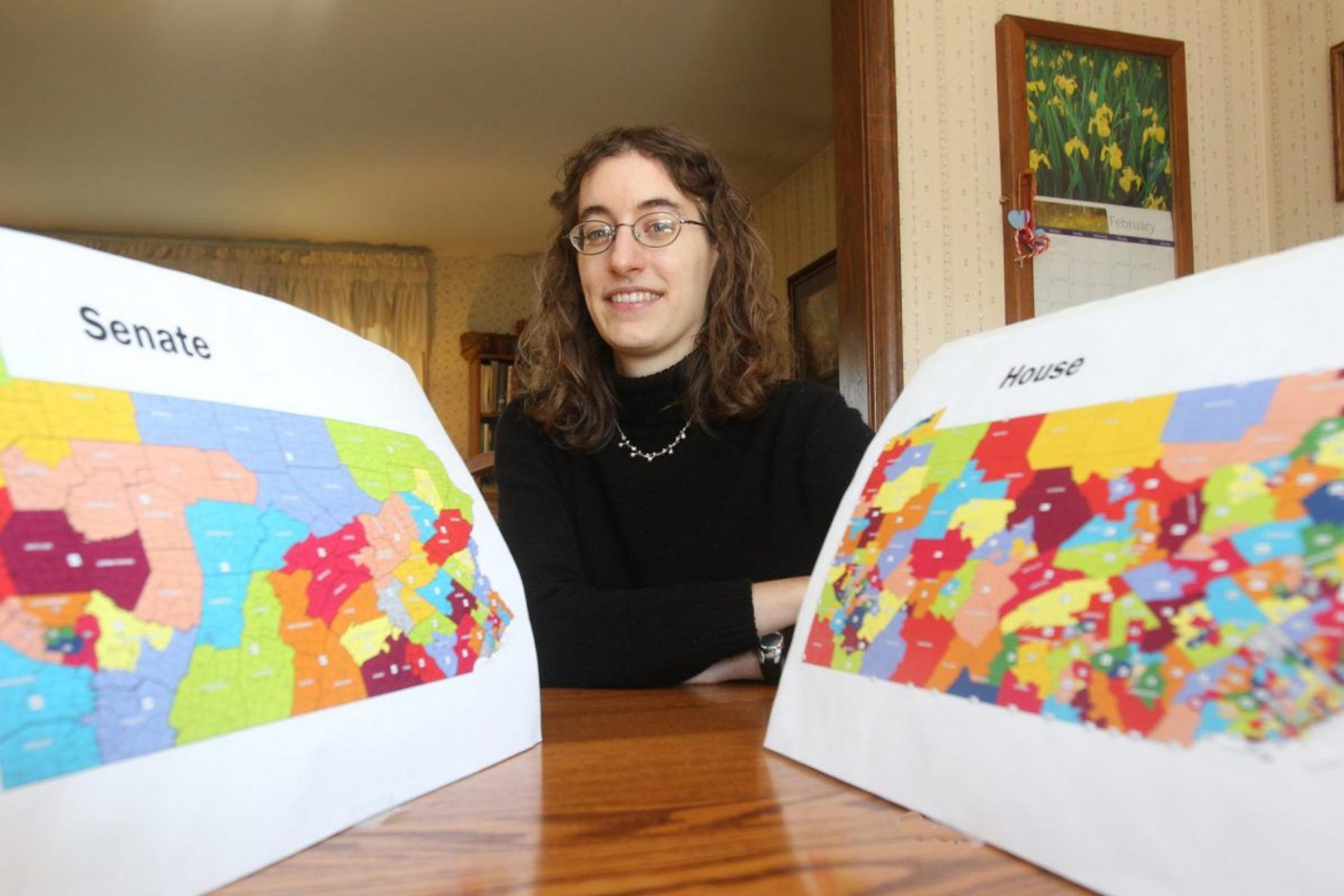 (Harrisburg) — When Amanda Holt was preparing to vote in 2010, she noticed something odd about the congressional districts within her county.

One small voting precinct of about 2,000 people in Lehigh County was in a different U.S. House district than the rest of the county’s precincts, and she couldn’t understand why.

As her curiosity grew, she noticed other oddities — a township randomly carved out of a congressional district, counties that could have fit into entire state Senate districts but were instead split between several — that she thought didn’t follow the constitutional rules for redistricting, the once-in-a-decade process of redrawing political maps.

“I thought maybe they weren’t aware the other way is possible that would allow them to avoid all the oddities, all the divisions I was seeing,” she said.

Using a simple Excel spreadsheet and census population data, Holt, a piano teacher and data research contractor, found she could create much more compact, contiguous, and equal-sized districts that didn’t split nearly as many localities — all of which the state constitution required.

So why couldn’t the most powerful leaders in the state legislature do it?

“You don’t really know why, because they don’t explain why they are departing from these traditional redistricting principles,” she said. “So it’s just left up to the imagination.”

State politicians who draw congressional districts, as well as their own, every 10 years leave a lot to the imagination, especially when they don’t have to tell you why a majority-Latino neighborhood is mysteriously carved out of an otherwise compact district, or why a college campus is split among three districts.

In reality, whichever party is in control of the process can draw districts to ensure or grow its majority and set government agendas for years.

Gerrymandering — when a map’s district boundaries are manipulated to benefit one political party over another — is often used to describe any number of abuses that occur in redistricting. A wonky-looking district can be thought of as gerrymandered, as can a district that splits communities without explanation.

It can be difficult to prove, legally. There’s no one standard to determine whether a map has been gerrymandered, and mapmakers rarely admit to doing it.

But it has been possible to demonstrate in a handful of states, including Pennsylvania, where the state Supreme Court in 2018 found Republicans in charge maximized the number of congressional seats for their party while disadvantaging Democrats. Members of that party won just five of the 18 seats with the Republican-drawn map, despite winning slightly more than half of the statewide vote.

“We showed that the features of the map could not be explained by anything other than partisan manipulation,” said Ben Geffen, a lawyer with the Public Interest Law Center who worked on the case.

Pennsylvania’s state House and Senate maps, which were drawn by Republicans and approved by the state Supreme Court in 2012, haven’t faced the same partisan scrutiny. Still, experts say that some of the same computer-based techniques used in the 2018 legal case show the maps skew toward Republicans, and that it is unlikely this happened organically.

When lawmakers go back to the drawing board later this year to make Pennsylvania’s new maps, experts and analysts will apply these same tests to evaluate whether there are any partisan asymmetries that can’t be explained by chance.

If the goal of partisan gerrymandering is for one party to do everything possible to secure as many seats as it can, the way to do that is by packing and cracking districts. Packing crams voters of the rival party into a few districts to give that party overwhelming wins. Cracking spreads members of the rival party across a large number of districts so their votes don’t matter as much.

A concept called the efficiency gap, developed by Harvard Law professor Nick Stephanopoulos and political scientist Eric McGhee, measures the extent that districts have been cracked or packed by looking at the number of collective “wasted” votes in each district.

Any vote that is above what a candidate needs to win is an extra, or wasted, vote. Likewise, any vote for the candidate who ends up losing is also considered wasted.

The efficiency gap takes the difference between the parties’ respective wasted votes and divides that by the total number of votes cast.

“It captures, in a single tidy number, all of the packing and cracking decisions that go into a district plan,” Stephanopoulos and McGhee wrote in a 2014 working paper.

In all Pennsylvania House and Senate districts that were drawn in 2012, Democrats had 1.1 million to 1.2 million more wasted votes than Republicans. The more wasted votes a party has, the more likely that party is to have been disadvantaged.

U.S. Chief Justice John Roberts has called the efficiency gap “sociological gobbledygook,” a phrase embraced by the Republican State Leadership Committee. The national organization, which works to elect GOP candidates at the state level, claims Republicans win more seats than the total vote share because they have stronger candidates and policies that appeal to voters.

While the efficiency gap has been used in legal arguments where federal courts, including in North Carolina and Wisconsin, have struck down maps, the U.S. Supreme Court has sidestepped questions about what standards, if any, should be used to determine partisan gerrymandering.

Another way to measure the extent of cracking and packing is to test whether one party’s wins are more lopsided than the other. In a scenario in which the two parties’ vote shares are similar, both parties win seats by comparable margins overall, said Ari Goldbloom-Helzner, computational research analyst with the Princeton Gerrymandering Project. Picture a mix of strongly partisan, generally reliable, and swing districts.

But in a gerrymandered plan, one party easily wins by large margins, suggesting that it’s winning districts that are packed with its own voters, while the other party wins more districts by smaller margins. If lopsided districts are unlikely to occur by chance alone — unique geography, candidate preference, and some natural randomness aside — that may indicate there was intentional gerrymandering.

The Princeton Gerrymandering Project used a well-known statistics tool called the “t-test” and found the chance that this 5% difference would have arisen by “nonpartisan processes alone” is almost zero. 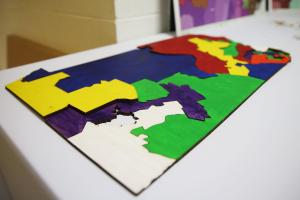 Amanda Holt served on Gov. Tom Wolf’s Redistricting Reform Commission, which sought input from residents across the state on how future legislative districts should be drawn. Tim Tai/The Philadelphia Inquirer

Partisan bias asks how different the parties’ respective seat shares would be if Democrats and Republicans each hypothetically received 50% of the statewide vote. It looks at whether each party is winning its fair share of seats, or if one party is more easily and unfairly winning extra seats.

If Democrats and Republicans in the state Senate each got the same total number of votes across the 50 districts, Republicans would win 9.1% extra seats, showing the plan is skewed to favor Republicans. The same goes for state House districts, which would give Republicans an extra 8.2% seats in a hypothetically tied race.

None of the tests can be used alone to indicate gerrymandering, Goldbloom-Helzner said.

Although scholars and redistricting experts who rely on these tests have found, in most instances, the party in control of redistricting has a partisan advantage in the maps, it’s not the only factor influencing the political outcome.

A concept known as unintentional gerrymandering, or self-sorting, argues that substantial bias can also be found in a map because like-minded people naturally cluster in certain areas.

Two professors, Jowei Chen and Jonathan Rodden, found the highest levels of map bias against Democrats occurred in states where the party’s voters were concentrated in urban areas. Republicans are typically spread out over rural areas and suburbs, so less of their votes are “wasted” and the party wins districts by narrower margins.

This natural self-sorting concept has been used by lawyers to defend maps perceived as gerrymandered. They argue that because Democrats are clustered in cities, Republican mapmakers cannot be held responsible for large gaps between the percentage of overall votes won and the percentage of seats won. They claim political geography can fully explain the underrepresentation of Democrats in a legislature.

The redistricting process is now underway in Harrisburg.

This year, Republican leadership will draw a new congressional map for Pennsylvania, which will lose one of its 18 districts because of sluggish population growth. But unlike a decade ago, their map will need the approval of a Democrat: Gov. Tom Wolf. A veto from Wolf could send the map to the Democratic-led state Supreme Court, which ruled repeatedly against the GOP in election- and pandemic-related cases last year.

The justices will also pick the chair of the Legislative Reapportionment Commission — which draws the state House and Senate maps — after its members deadlocked on someone to serve as the likely tie-breaker vote.

Holt — who served on Wolf’s Redistricting Reform Commission after challenging the state’s 2011 House and Senate maps in court — said she’s again paying attention to whether the mapmakers are held accountable through measurable standards, especially when it comes to minimizing the number of communities that are divided.

“The places in which they live need to stay together so they can have the strongest voice possible for the next 10 years,” she said.

Today is the last day to register to vote in the 2021 Pa. primary