Producers Peter Spears, from left, Frances McDormand, Chloe Zhao, Mollye Asher and Dan Janvey, winners of the award for best picture for "Nomadland," pose in the press room at the Oscars on Sunday, April 25, 2021, at Union Station in Los Angeles.

7 takeaways from the train-station Oscars 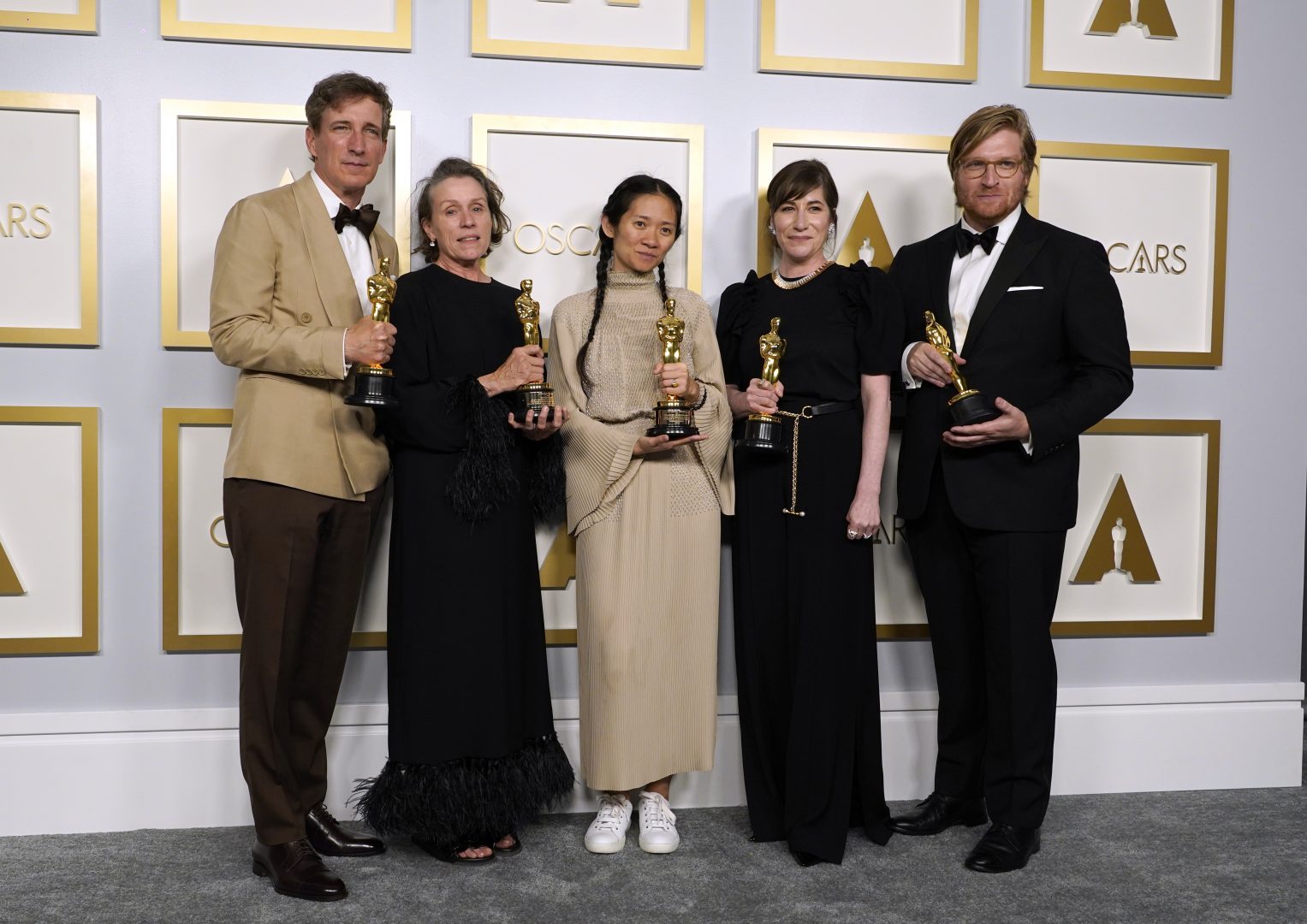 Producers Peter Spears, from left, Frances McDormand, Chloe Zhao, Mollye Asher and Dan Janvey, winners of the award for best picture for "Nomadland," pose in the press room at the Oscars on Sunday, April 25, 2021, at Union Station in Los Angeles.

(Los Angeles) — 1. Sometimes, there’s a reason things are done the way they are. Traditionally, Oscar night has ended with the announcement of the winner for best picture. This year, as the producers — including experienced risk-taker Steven Soderbergh — tried to mix it up a little in their train-station ceremony, they decided to change the order. They presented best picture to Nomadland, then best actress to Frances McDormand, then best actor to Anthony Hopkins for The Father. Hopkins wasn’t there, so presenter Joaquin Phoenix said the Academy accepted the award on his behalf, and because there was no host, that was pretty much it. Goodnight, everybody!

There were those who believed that this happened because there was a cynical calculation that the late Chadwick Boseman would win for Ma Rainey’s Black Bottom, and that a speech — perhaps from his wife, Taylor Simone Ledward — would be a particularly emotional closing note for such a difficult and unusual year. If true, it was a highly cynical calculation, and if not, it showed a lack of foresight not to realize it might appear to be one. And whatever the intent, the result was that, instead of ending with a celebration on stage, as has happened with films like Moonlight and Parasite and other worthy winners, the entire three-plus-hour show ended with an award given to someone who wasn’t even there.

Experimentation? Sure. Innovation? Of course. Breaking the structure without thinking through how it might come off? That’s a dangerous approach. 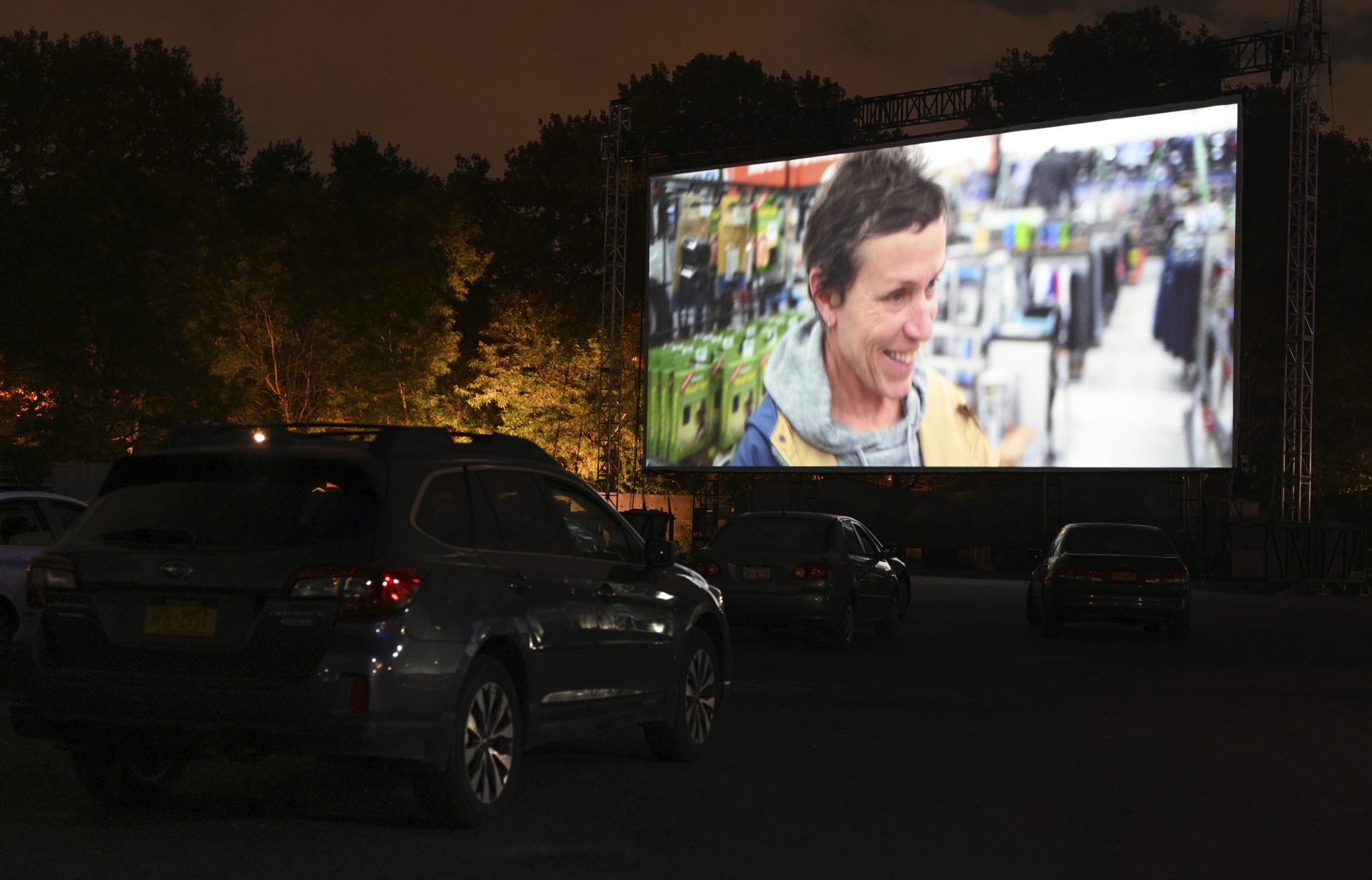 Filmgoers attend the “Nomadland” screening at the Queens Drive-In at the New York Hall of Science during the 58th New York Film Festival on Saturday, Sept. 26, 2020, in New York.

2. Relaxed speeches are … well, they’re more relaxed. Without a live orchestra to play people off, some speeches stretched out in a way that, early on, seemed like it might mean the show would go on all night. Some were a bit meandering; some a bit undisciplined. But they were charming, too. And in some cases, that extra space allowed deeply emotional thoughts to be shared without fear of suddenly being interrupted, as when Thomas Vinterberg accepted the best international feature award for Another Round and spoke movingly of the loss of his daughter in a car accident during production. It’s not just that Vinterberg got to speak, but that he got to speak without pressure and without the sense of a ticking clock. Whatever future Oscars ceremonies look like, it would be lovely to rethink the “speed through the list of names before you get cut off and don’t forget anyone important or powerful” format they often have.

3. Don’t be careless with In Memoriam. The In Memoriam segment is a production challenge: The audience tries to clap for certain people, the music has to feel appropriate, the visuals have to give at least a respectful amount of context for who each person was. Not so in 2021. Certainly, it was a year with a larger-than-average number of deaths, particularly among older people. But the answer to that would have been a longer segment. What they did instead was to cram the list into a segment that didn’t allow a lot of names to appear as much more than a flash on the screen — not even enough time for their names to be read. The math of dividing up a song, or parts of a song, to sync with a set of slides is not the art of it. That’s the beginning of it. The art of it is being careful not to accidentally disrespect the people you’re trying to honor.

4. Play the clips. The producers discarded the feeling that the Oscars telecast often has that it’s a big, goofy, splashy, intermittently musical party. Instead, they staged a sort of a staid banquet like you might see at the end of a long fundraising campaign for a fancy museum, where everyone thanked everyone else for their hard work. So, instead of seeing clips of the particularly strong best actress field, we saw presenter (and last year’s winner) Renee Zellweger personally say how much she liked each of the performances. That kind of direct address can have its place, but clips — particularly in categories like short films and makeup — can really give people a sense of the work that’s being honored. It’s cute to have the presenter tell us that a short film director likes a particular snack, but walking away with no idea what any of a lot of the honored work even looks like seems like a failure.

5. Lots of firsts and nearly-firsts, but progress is so very slow. Chloé Zhao became the first woman of color, and only the second woman, to win best director, for Nomadland. The delightful Yuh-jung Youn, who flirted with Brad Pitt while accepting her award for Minari, was the first Korean and the second Asian to win as best supporting actress. And Mia Neal and Jamika Wilson, who worked on Ma Rainey’s Black Bottom, became the first Black women to win in the category of makeup and hairstyling. But to celebrate because an entire second woman won best director? It’s a difficult ask. These things take time. A lot of time. 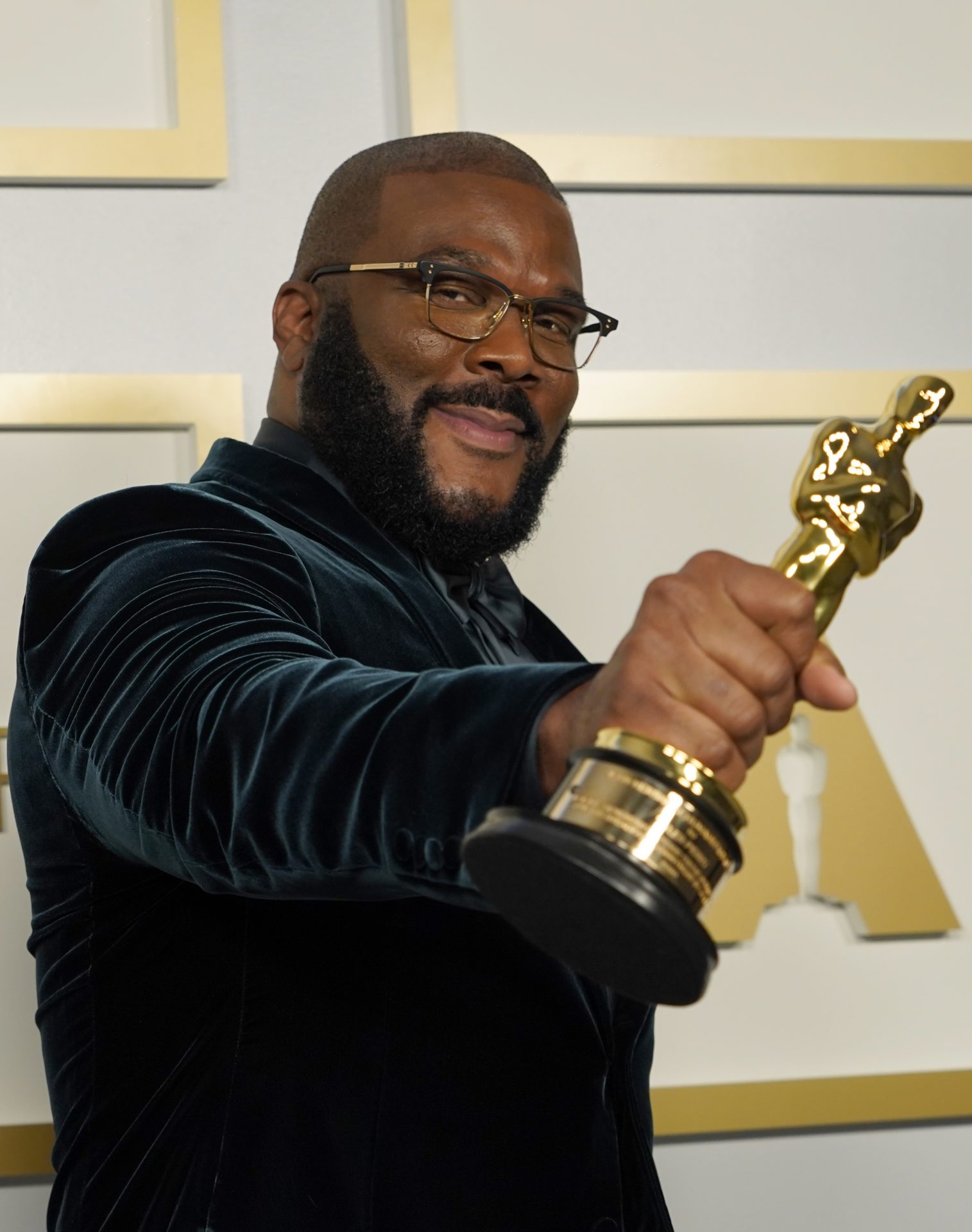 Tyler Perry, winner of the Jean Hersholt Humanitarian Award, poses in the press room at the Oscars on Sunday, April 25, 2021, at Union Station in Los Angeles.

6. The big trailers are dropping. As this Oscars season ends, the next one is already ramping up. Trailers for In The Heights and Steven Spielberg’s production of West Side Story had prominent placement during the telecast. Both are expected to get awards attention in the next cycle. Hollywood may have spent this year figuring out how to do without theaters, but it’s eager to get audiences back into them as soon as possible.

7. Nobody ever really solved the COVID problem with awards shows. All the awards shows were a little different this season. In some ways, the Grammys had it easiest because, as a show centered on musical performances, they were able to capitalize on the quick progress people have made in learning to record musical performances that work perfectly well on television, even without a typical awards-auditorium setting. But for a show like the Oscars, which is so reliant on a sort of oscillation between earnestness and silliness — both of which benefit from the presence of a crowd — it’s very hard to solve the fundamental problem, which is that when a lot of people can’t easily party together, there’s nothing else that really substitutes for a lot of people partying together. The Emmys solved this with little sub-parties for different shows, and the Globes had various remotes from different people’s homes and laptops. But as in life, nothing else is like raucous company. This telecast figured out how to find some of the earnestness, some of the meaning. It didn’t find the exhilaration. The closest it came was a fairly labored bit in which Glenn Close improbably wound up saluting the legendary go-go number “Da Butt.” And doing the dance. (Yes, really.)

But, as Frances McDormand would say, look: Nothing else is like raucous company. See you next year.