Boxes containing the Johnson & Johnson COVID-19 vaccine sit next to vials in the pharmacy of National Jewish Hospital for distribution early Saturday, March 6, 2021, in east Denver. Volunteers worked with nurses and physicians from National Jewish to administer 2,500 vaccinations of the Johnson & Johnson vaccine that requires a single shot instead of two like the other vaccines.

The most popular Johnson & Johnson vaccine story on Facebook? A conspiracy theorist posted it

It's a stark example of what experts warn could be a coming deluge of false and misleading information related to the one-shot vaccine. 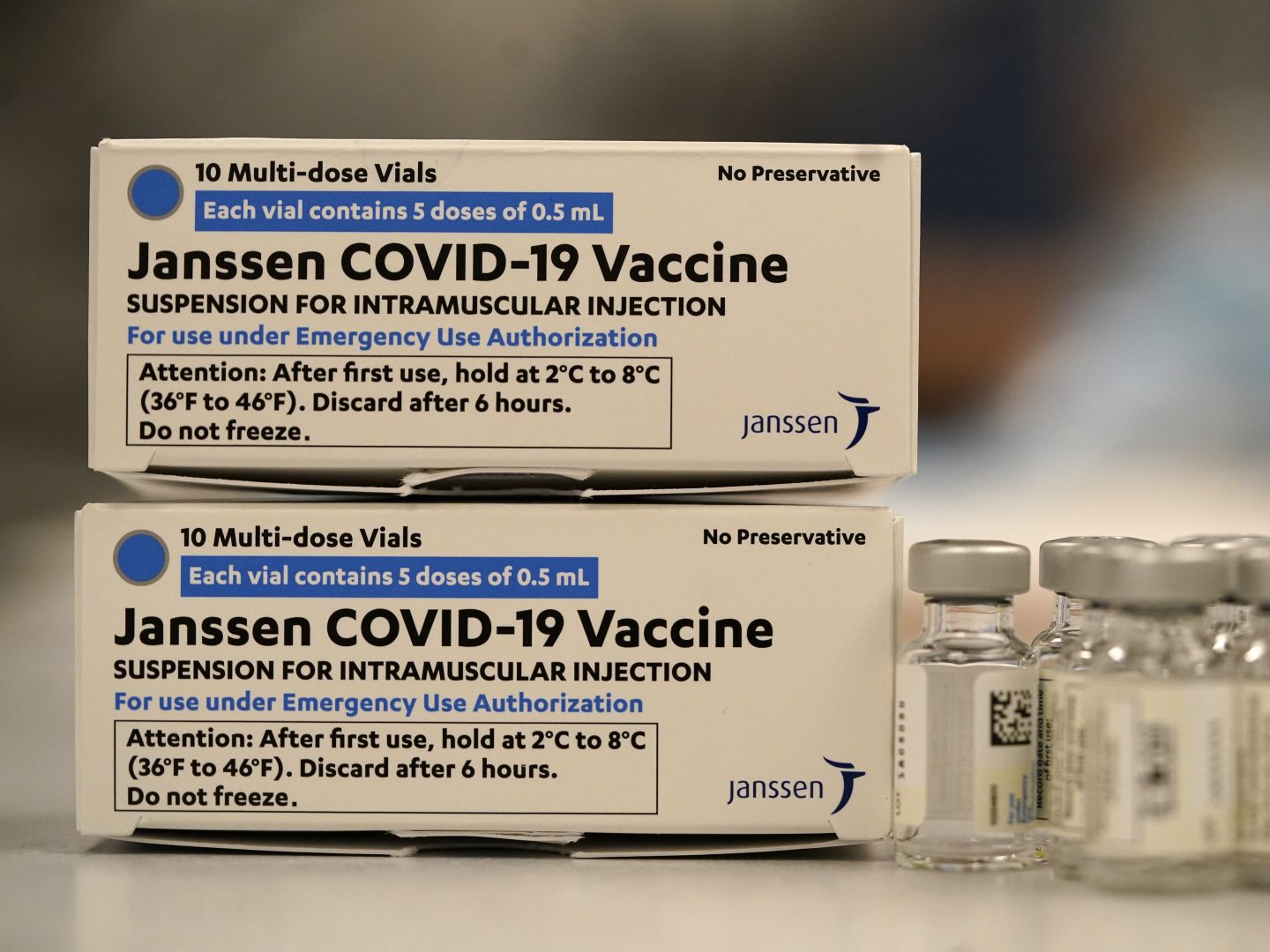 Boxes containing the Johnson & Johnson COVID-19 vaccine sit next to vials in the pharmacy of National Jewish Hospital for distribution early Saturday, March 6, 2021, in east Denver. Volunteers worked with nurses and physicians from National Jewish to administer 2,500 vaccinations of the Johnson & Johnson vaccine that requires a single shot instead of two like the other vaccines.

Those are the publishers of four of the five most popular Facebook posts of articles about the Johnson & Johnson Covid-19 vaccine this week. They’re ranked 2-5 in total interactions, according to data from the tracking tool Crowdtangle.

Number one however, isn’t from a news organization. Or a government official. Or a public health expert.

The most popular link on Facebook about the Johnson & Johnson news was shared by a conspiracy theorist and self-described “news analyst & hip-hop artist” named An0maly who thinks the pandemic is a cover for government control.

It’s a stark example of what experts warn could be a coming deluge of false and misleading information related to the one-shot vaccine.

When most Americans went to bed Monday evening, the news about Covid-19 vaccinations in the U.S. was overwhelming positive: the average number of shots administered per day was well over three million, leading to many rosy predictions that pandemic restrictions could ease in the coming months and some semblance of normalcy could return. 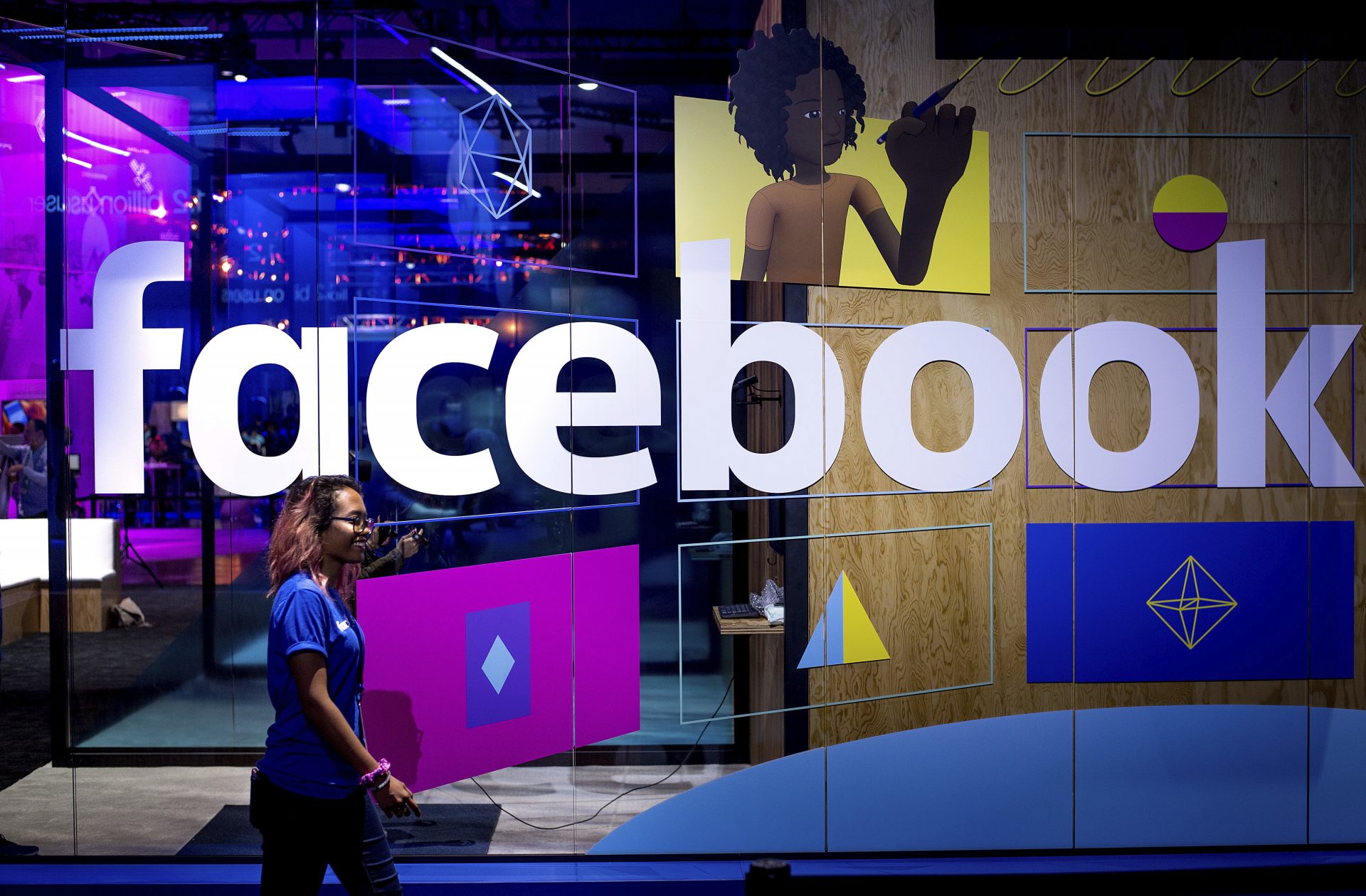 But that story shifted on Tuesday after federal health officials recommended a temporary halt in the use of the Johnson & Johnson vaccine, after a handful of reports about blood clots surfaced among the millions of people who have received the shot.

Many doctors argue this sort of delay should actually be seen as a positive for vaccine safety: officials are paying close attention to the reports of side effects and acting quickly to maintain public confidence in the vaccination effort.

But experts who follow internet trends are bracing for the worst when it comes to how this news is understood and received by the public.

“This is what I would call the perfect storm for misinformation,” said Jennifer Granston at Zignal Labs, a media intelligence platform.

Millions of Americans were already skeptical of the vaccines before the Johnson & Johnson news, and a vast online network exists to feed that skepticism with bad information and conspiracy theories.

That network went into action almost immediately after the pause in vaccinations was announced.

Robert Kennedy Jr., who is considered one of the top spreaders of vaccine misinformation in the U.S., posted the news to his 230,000 Facebook followers.

Rizza Islam, another prominent promoter of vaccine hesitancy especially within the Black community, tweeted conspiracy theories about the Johnson & Johnson news to his 54,000 followers on Twitter (Islam was recently removed from Facebook).

Even some state lawmakers used the news to imply vaccines aren’t safe. One Pennsylvania state lawmaker, Rep. Rob Kauffman, posted to his 13,700 Facebook followers that “we don’t fully understand these vaccines.” 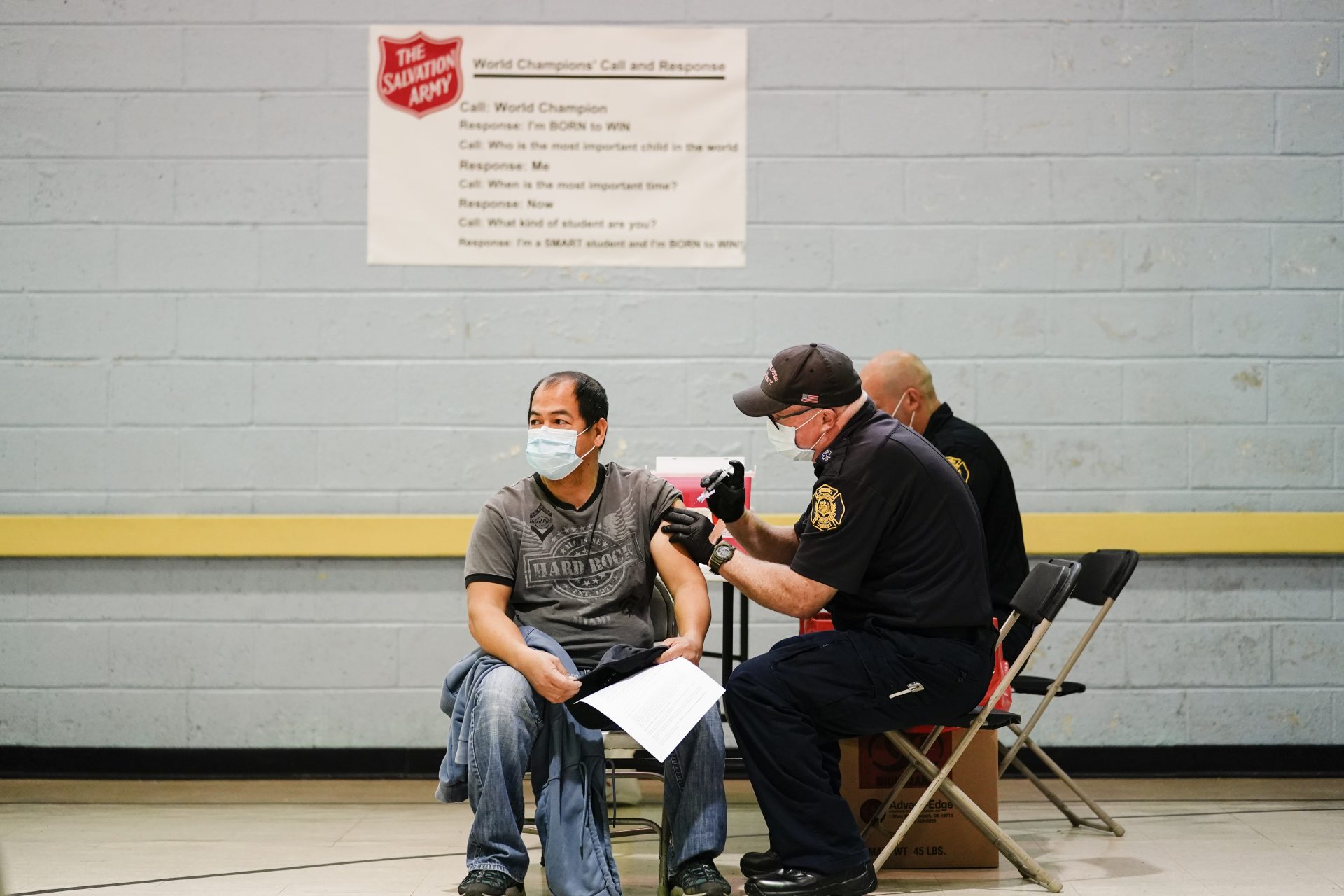 In most cases, the social media companies say they can’t do much to respond in cases like this, since people largely are sharing articles based on factual information, even if the commentary and subtext around the posting is meant to further false ideas.

Many anti-vaccine activists have adopted this tactic as a way of getting around social media networks’ policies designed to halt the spread of false information.

An0maly, the influencer with the widely-shared posting about the Johnson & Johnson vaccine, shared a CNN story with a misleading caption to his 1.5 million Facebook followers.

“The issue is this is a factual report,” said Sarah Roberts, an information studies professor at UCLA. “But the people reading the report either have such deeply-held preconceived notions about its meaning or they lack appropriate context to receive the information.”

Overall, it’s hard to overstate the degree to which the Johnson & Johnson story blew up online.

The company was getting as many mentions online every hour Tuesday as it had during entire weeks prior to the news, according to data from Zignal.

Much of those mentions were not in reference to misinformation, but Zignal’s Granston says anytime interest in a topic spikes like that online, especially with a polarizing subject like vaccines, it provides a ripe environment for misinformation as well.

“These big conversations provide this huge platform for people to further a specific agenda around this information,” she said.

Zignal saw an uptick in mentions of narratives about side effects, but also in other vaccine misinformation narratives unrelated to the actual news like vaccine passports, deaths, and microchips. 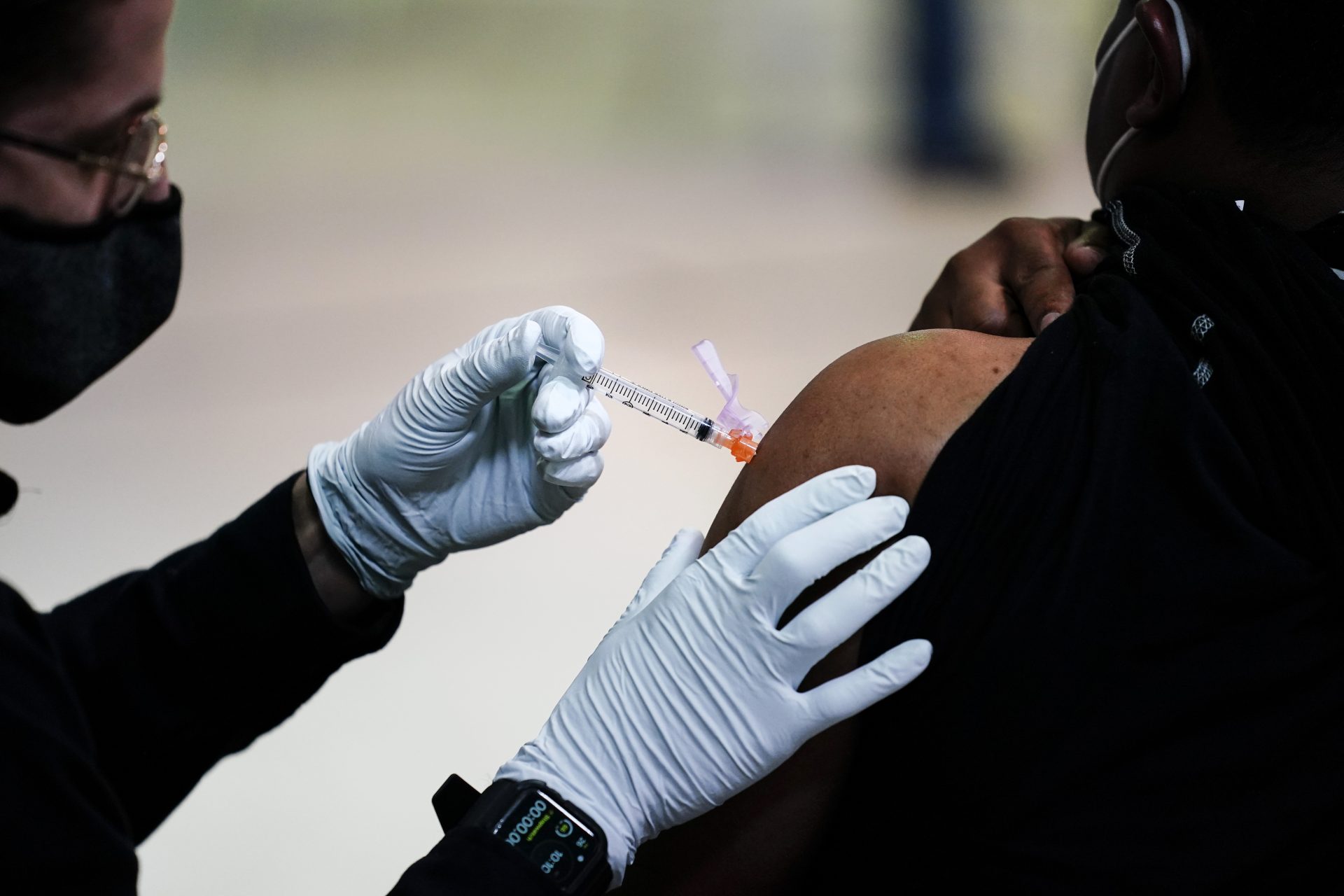 A member of the Philadelphia Fire Department administers the Johnson & Johnson COVID-19 vaccine to a person at a vaccination site at a Salvation Army location in Philadelphia on March 26, 2021.

The Johnson & Johnson pause is also fertile ground for conspiracies because it is a developing topic with a number of unanswered questions.

Often, misinformation peddlers with a specific agenda will fill in knowledge gaps with false information, knowing that people are desperate for any information at all.

Because health officials are still investigating the clotting issue, and determining guidance about the vaccine, there isn’t much trustworthy information the government or credible outlets can provide to fill that void.

Roberts, of UCLA, says the problem is further exacerbated because the country has become so divided over the pandemic in general.

Former President Trump primed a portion of the country over the past few years to be skeptical of official sources of science information, including the Centers for Disease Control and Prevention. On Tuesday, he released a statement that included a false conspiracy theory about the Johnson & Johnson vaccine, claiming without evidence that the decision was made to benefit rival drug makers.

Now, Roberts says, whenever the CDC comes out with guidance about the Johnson & Johnson vaccine, health officials will be fighting ingrained doubts.

“Every time there’s going to be a new bit of negative [vaccine] information or circumstances that sow doubt, it’s like we’re caught on the back foot and we have to come together again and push forward,” Roberts said. “To call that an uphill battle… I mean it’s like a Mount Everest-sized battle. Uphill seems like an understatement.”

Even after that guidance does come out, which officials say they hope will be in a matter of days, it’s likely this development has ripple effects, especially driven by those who have made fear a business model and built their brands on vaccine skepticism.

More COVID shutdowns unlikely in Pennsylvania and other states, despite CDC suggestion