(Pittsburgh) — The Biden administration outlined the potential benefits of its $2.3 trillion infrastructure plan for individual states Monday, saying that it would save Pennsylvanians money on auto repairs, housing and internet service. The package also seeks to expand job opportunities by investing in childcare, manufacturing innovation, and clean energy development.

“For decades, infrastructure in Pennsylvania has suffered from a systemic lack of investment. The need for action is clear,” the White House said in a “fact sheet” that highlights how Biden’s American Jobs Plan could impact the state in a dozen policy areas.

For example, the administration said the plan would help to repair nearly 3,400 bridges and more than 7,540 miles of highway in the state. It added that poor road conditions cost the average Pennsylvania motorist $620 a year in auto-related costs.

Fourteen percent of the state’s households lack internet subscriptions, the White House said, while 720,000 Pennsylvanians are rent-burdened, meaning they spend more than 30% of their income on rent. The White House estimated that 57% of Pennsylvanians lack adequate access to childcare. 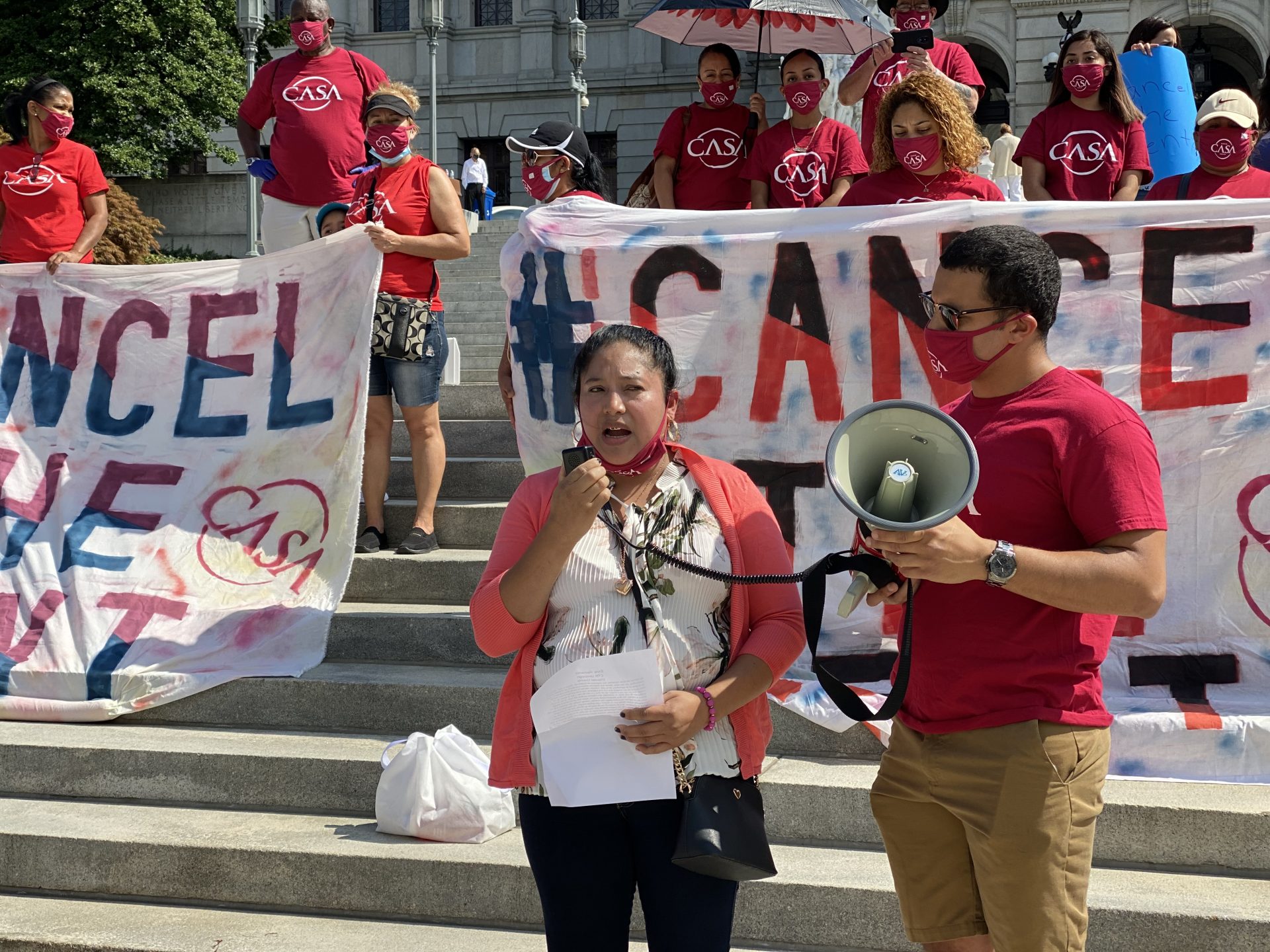 FILE PHOTO: Elvia Gonzalez shared her story about losing work, contracting the coronavirus and struggling to pay rent during the pandemic Wednesday, Aug. 26, 2020, on the Capitol building steps.

Critics have faulted Biden’s plan for how broadly it defines infrastructure. They say the term should apply mainly to public-works projects, including road and bridge repairs.

But Pennsylvania AFL-CIO President Rick Bloomingdale said that services such as childcare are key to job creation. As more women have entered the building trades, he said, the need for childcare has grown.

“If you’re talking about infrastructure, you also have to talk about, how do we make sure that people can get to work?” he said during a call hosted Monday by the progressive Atlantic Council Global Energy Center, the National Wildlife Federation, and Reimagine Appalachia.

The measure already faces staunch GOP opposition. When Biden announced it last month, Republican Pennsylvania Sen. Pat Toomey blasted it as “a massive tax increase” that would prolong “enormous spending binge” that began with the passage of coronavirus relief a year ago.

Toomey noted that the package would undo aspects of Trump-era tax policy: Biden has proposed raising corporate tax rates from 21 % to 28% — a rate that is still low by modern standards — and increasing the global minimum tax.

Some Democrats have also expressed reservations about the proposed tax hikes, and West Virginia Sen. Joe Manchin, a moderate Democrat, is expected to wield tremendous influence: He could be the decisive vote in the evenly-divided Senate.

But Angie Rosser, the executive director of West Virginia Rivers Coalition, said, “I am confident that [Manchin] will make a sincere and deliberate effort to [broker bipartisan support]. I’m also confident he is not going to let this opportunity pass us by. There’s too much at stake. There’s too much need.”

“It’s about what we need to create a future for our kids. And that’s what it comes down to: How can we build a place where our kids won’t have to leave the state and find jobs [elsewhere]?” said Rosser, who spoke on the same call as the AFL-CIO’s Bloomingdale.

The Biden administration contends that its plan would help to revive struggling communities.

In the fact sheet released Monday, it said government incentives would spur manufacturing and energy innovation in coal mining communities, which are predominantly white. People of color, meanwhile, would benefit from workforce development programs, the administration said in a separate release.

Bishop Marcia Dinkins, of Ohio Interfaith Power & Light, said it is important to create job opportunities for marginalized groups in both rural and urban areas.

“They’re experiencing the same problems,” she said. “And if we’re going to have a conversation about growth, we have to have this conversation where we’re meeting each other at the crossroads, to then begin to join hands together to bring each other along.”

State police to alter fitness standards that kept out women