Some in power are still mad that Pa.’s Supreme Court ruled on election law. Here’s why it matters now.

"There's nothing extraordinary in what the Supreme Court did in interpreting these [election] statutes. It's what they do every day." 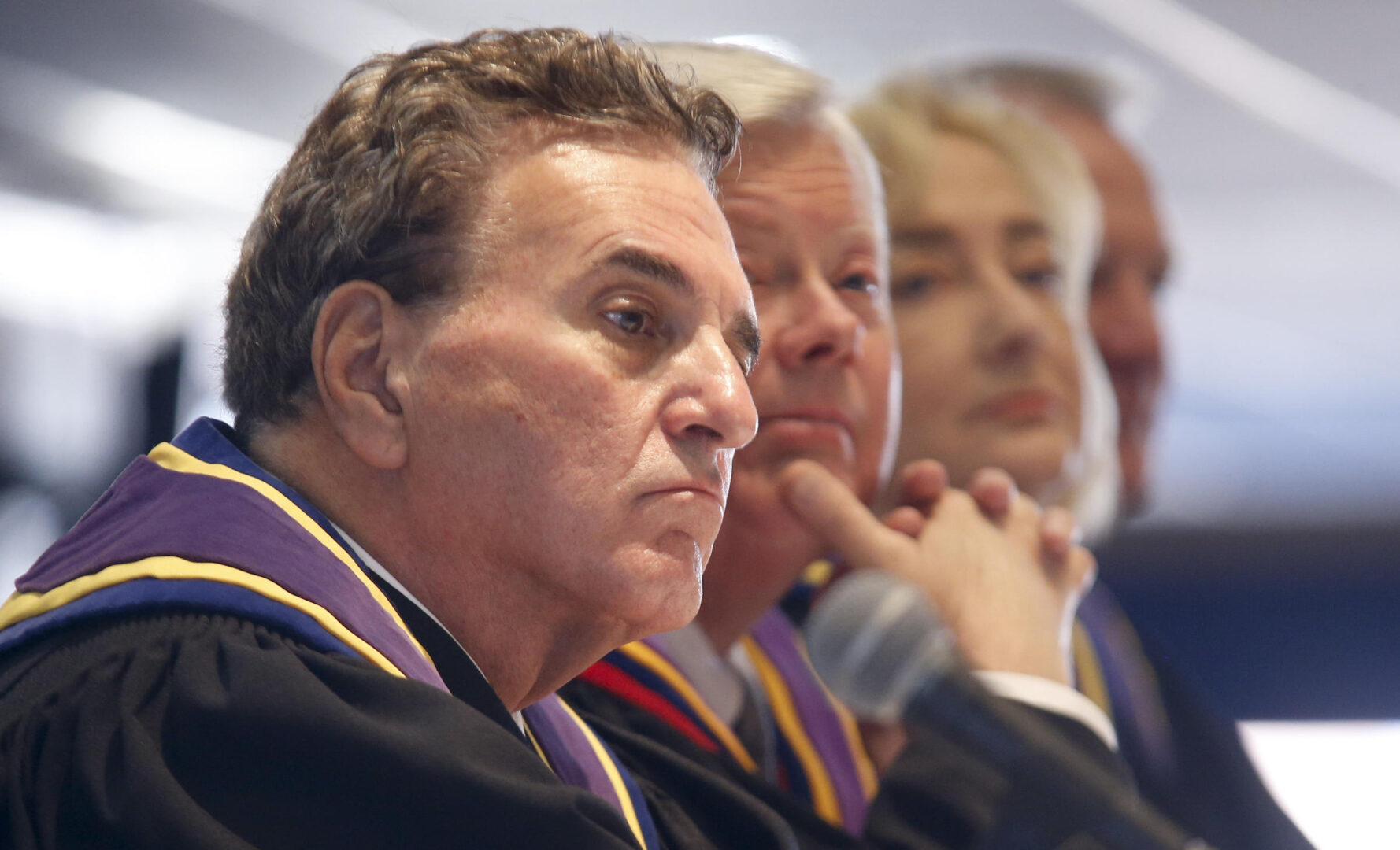 (Harrisburg) –– Some state and federal lawmakers are holding tight to their view that the Pennsylvania Supreme Court improperly interfered in the 2020 election, further escalating tensions between the legislative and judicial branches that’s existed for years.

Simply tune into media outlets that cater to the conservative base, and you’ll find Pennsylvania’s handling of the election is still a hot topic. In late March, state Sen. Doug Mastriano (R-Adams County) talked about it with former President Donald Trump’s one-time lawyer, Jenna Ellis, on her Real America’s Voice TV show.

The pair focused on the state’s highest court during the segment.

“The Pennsylvania Supreme Court on September 17th of last year rewrote our legislation, took away safeguards, added three days, [and] did things they had no business doing,” Mastriano claimed.

Here’s the Court’s ruling in the landmark case Mastriano referenced.

Republican U.S. Rep. Scott Perry, who represents parts of Cumberland, Dauphin, and York Counties, is also still talking about it.

In late February he wrote an op-ed in a right-leaning publication arguing the state Supreme Court changed election rules mid-game, at best overstepping its role in state government, and at worst robbing voters of their constitutional rights.

“Every citizen must have faith and confidence in the integrity of our electoral system,” Perry wrote. “Sadly, the unconstitutional actions of the Pennsylvania Supreme Court and Gov. Wolf have eroded that trust for many.”

Here’s a good place for a few reminders: the legislative, executive and judicial branches are equal and serve as a check and balance on one another. On top of that, a wide variety of election experts and leaders of both political parties concluded months ago that the 2020 election was free and fair, and the actions of the Wolf administration and Supreme Court have been held up in a number of court appeals.

“There’s nothing extraordinary in what the Supreme Court did in interpreting these [election] statutes. It’s what they do every day,” Brand said. “The controversy came because it involved a hotly contested election in the midst of a pandemic.”

Brand said this all started when shutdowns and restrictions amid the COVID-19 pandemic prompted new legal questions the GOP-controlled state legislature couldn’t have expected when they approved no-excuse mail-in voting in 2019.

Some of the biggest questions included those around whether drop boxes were allowed, and whether the commonwealth was able to give postmarked ballots a few extra days to reach county offices after the U.S. Postal Service implemented changes that resulted in slowdowns.

Since the law didn’t address those kinds of concerns outright, Brand says Pennsylvania’s highest court stepped in and answered, “Yes, you can.”

“This sort of simplistic argument that the Supreme Court has torn loose from its moorings by interpreting state law which was either ambiguous or conflicted with other provisions is just not tenable,” he said.

“The way that the public sees [this] is a bunch of Democrats on the Supreme Court issued rulings that helped the Democratic party and that this is a partisan sham,” Dimino said. “The truth is a little more complicated.”

Dimino points out that though justices do compete in partisan elections, they don’t really do politics the way players in the other branches of government do. That is, they don’t rule one way or another on a case to help their party.

Instead, they interpret the law in the way their legal training and philosophy tells them is right, which can vary depending on if a justice swings conservative or liberal in their thinking. Dimino said during the 2020 election, that’s just what Pa.’s Supreme Court did.

“They have the authority, the power that is, to interpret the law in whatever way they think is proper,” he said.

This is what some in the GOP are getting hung up on: they say the Court’s interpretations allowing pandemic election procedures might have tipped the scales or even violated the U.S. Constitution.

For what it’s worth, the Court’s GOP justices agreed with parts of the decisions in the state’s landmark election case in September. Plus, at least two federal judges that reviewed parts of how the election was handled (U.S. District judges J. Nicholas Ranjan of the Western District of Pennsylvania and Timothy Savage of the Eastern District) sided with the Wolf administration and Supreme Court.

Dimino says the real qualm here is with judicial philosophy, and there’s been serious legal debate for decades around which one is right. In this case, Dimino sides with those who say the Pennsylvania Supreme Court’s decisions ignored the text of the election law in some cases.

Ultimately, though, liberal and conservative judges at all levels are allowed to have their philosophies.

“Whether that’s correct, whether that’s the way that the justices should be acting, that’s much more debatable,” he said.

But that whole debate is a distraction in Democratic political strategist Mustafa Rashed’s opinion. He believes something else is lurking beneath the surface of these sustained arguments against the state Supreme Court.

“It’s part of a strategy to make voting harder and reduce access to voting,” Rashed said.

That push is happening all over the country right now, in Georgia, Arizona, and other states that President Joe Biden flipped blue and where former President Trump and some of his allies continue to baselessly challenge the legitimacy of the vote.

Rashed said Pennsylvania is among them, which makes it a prime place to try for new voting restrictions. Mostly Republican state lawmakers have sponsored more than a dozen bills along those lines so far this session, including a pair of measures in the House and Senate to do away with no-excuse mail-in voting.

“[If you] say something was unfair or it was done wrongly, it gives you the justification to have legislation that will roll back voting in this country, and that’s what I’m most concerned about,” Rashed said.

Like Rashed, she said she’s worried about lawmakers using misleading arguments about the state Supreme Court to proffer changes. She referenced a 2018 effort by now-state Sen. Cris Dush (R-Cameron County) to impeach four of the Court’s Democratic justices after the Court ruled a 2011 political district map unconstitutional and imposed its own map.

“We have a history here in Pennsylvania: when we’re not happy with what the Courts decide, we take it out on them through emotional actions, through legislative actions,” Kenner said.

Kenner said she’s particularly worried about an effort to change the way Pennsylvania elects its appellate-level judges, a group that includes the Supreme Court. The proposal by Rep. Russ Diamond (R-Lebanon County) calls for electing those judges by more locally-focused districts instead of statewide.

Supporters pointed in part to what they allege happened during the 2020 election as their justification for the idea.

“This is nothing new. This is right out of the playbook,” Kenner said. “When folks are not happy with the decisions that come out of the Court, they try to find ways to change the makeup of the Court.”

It’s unclear right now whether either changing how judges are elected or ending no-excuse mail-in voting will happen. The proposal to do the former has been on ice since earlier this year. Meanwhile, House and Senate lawmakers are both conducting hearings on election processes, and have vowed not to pursue any serious changes until those wrap up.

The discussions have included county commissioners and election leaders of both parties, and they are telling legislators to focus on clarifying parts of the law so voters will know all the rules ahead of time.

In that case, the state Supreme Court might not have to step in.

Pa. Republican lawmakers and the U.S. Capitol attack
As part of WITF’s commitment to standing with facts, and because the Jan. 6 attack on the U.S. Capitol was an attempt to overthrow representative democracy in America, we are marking elected officials’ connections to the insurrection. Read more about this commitment.
Congressman Perry and Senator Mastriano are two of several dozen lawmakers who backed an effort to delay certification of Pennsylvania’s 2020 election result, despite no evidence that would call that result into question.
The election-fraud lie led to the attack on the Capitol.