Carolyn Fortney, a survivor of sexual abuse at the hands of her family's Roman Catholic parish priest as a child, awaits legislation in the Pennsylvania Capitol to respond to a landmark state grand jury report on child sexual abuse in the Catholic Church, Wednesday, Oct. 17, 2018 in Harrisburg.

The proposal was sent to the state Senate by a vote of 149 to 52, two weeks after both chambers finished the first round of approvals for the constitutional amendment. 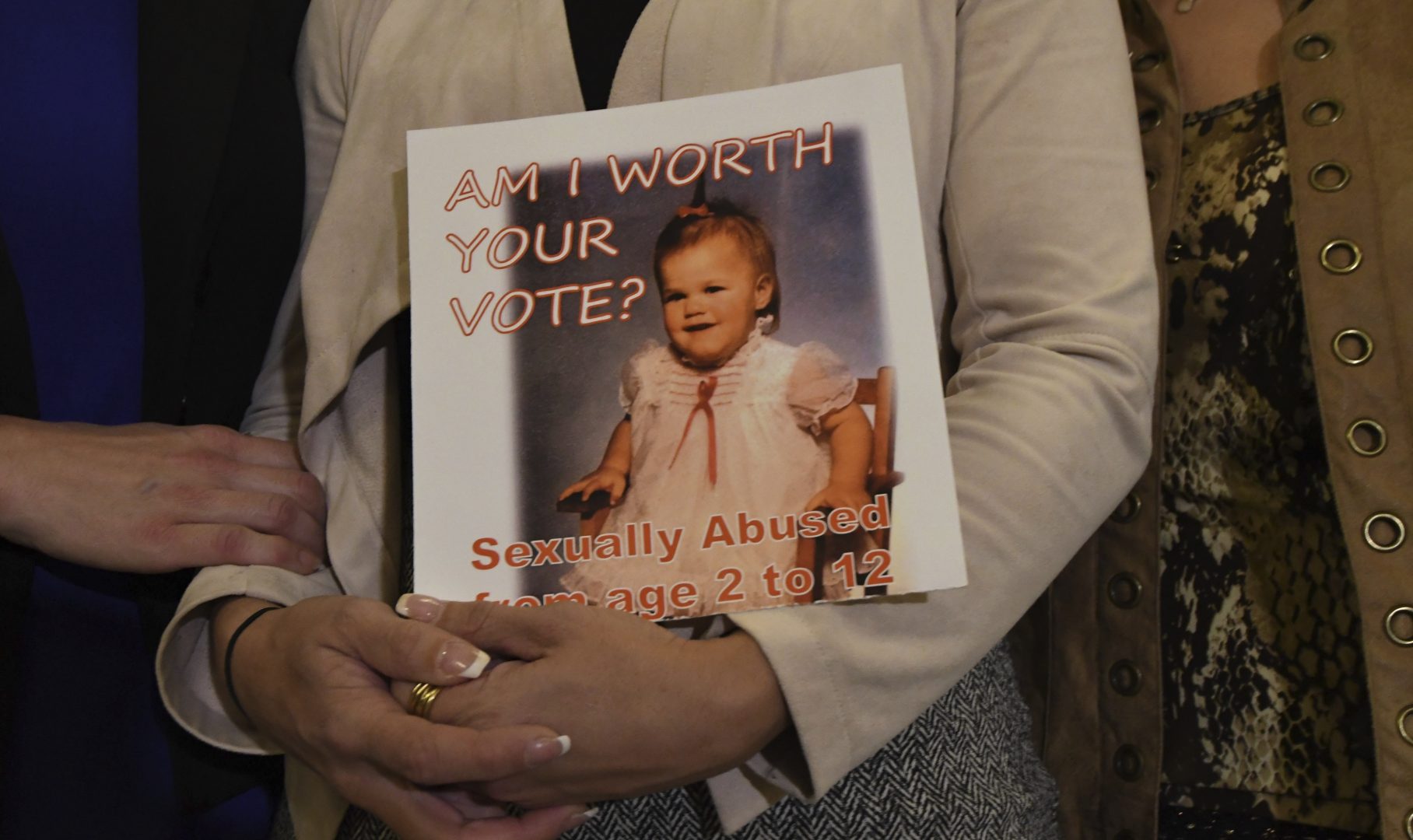 Carolyn Fortney, a survivor of sexual abuse at the hands of her family's Roman Catholic parish priest as a child, awaits legislation in the Pennsylvania Capitol to respond to a landmark state grand jury report on child sexual abuse in the Catholic Church, Wednesday, Oct. 17, 2018 in Harrisburg.

(Harrisburg) — The Pennsylvania House approved a bill Wednesday to establish a two-year window for civil claims over childhood sexual abuse, part of a belt-and-suspenders approach that also includes a potential constitutional amendment.

The proposal was sent to the state Senate by a vote of 149 to 52, two weeks after both chambers finished the first round of approvals for the constitutional amendment. This is the third time in five years the House has approved some version of the legislation.

Lawmakers had voted last session to put the amendment before voters during next month’s primary, but the Department of State failed to advertise it as required, meaning that lengthy process had to be restarted.

Supporters are pursuing the lawsuit window as both regular legislation — the bill that passed through the House on Wednesday — and as a change to the state constitution that could take effect in 2023 at the earliest.

Both versions of the idea call for removing a legal protection known as sovereign immunity in cases of alleged sexual abuse. That has protected public entities, from state government to public school districts, from facing certain kinds of legal liability in the past.

Democratic Rep. Greg Vitali, of Delaware County, the only member to speak against the proposal on the floor, warned that part of the provision could prove expensive for Pennsylvania’s public schools.

“If this passes we are going to subject public schools to more litigation, more attorneys fees, more payouts, and in light of the fact that we are imposing all of these other costs, like the unfunded mandates, like the inadequate funding, it makes what we’re going to do today less appropriate,” Vitali argued.

He said the net result may mean spending cuts that affect schoolchildren.

“The kids today will be victimized in an effort to redress what happened forty years ago. And that’s not right,” Vitali said.

Republican Rep. Jim Gregory of Blair County, who has worked on the measure with its prime sponsor, Rep. Mark Rozzi (D-Berks County), said those arguments shouldn’t be enough to sideline the lookback window idea again. Survivors, he argued, have waited long enough.

“Victims want to fight, and if a court wants to challenge them, let them fight against the courts,” Gregory said. “Don’t make the legislature decide whether or not they get to fight.”

Gregory has found himself fighting against some of Republican colleagues who have not supported a statutory change. He said he holds no resentment.

“We all come from very different parts of this state, and we all come here with different experiences and different stories about what got us here,” Gregory said. “I can’t judge what got other people here.”

The bill faces unclear prospects in the state Senate, where majority GOP caucus spokesperson Erica Clayton Wright would not say if the bill will be called up for a vote or if it has the support of Senate Majority Leader Kim Ward, R-Westmoreland.

“As the Senate comes back to session, we will be working for the people of Pennsylvania to address how to responsibly allocate COVID-19 stimulus funding to help reopen our state, prepare to pass an on-time budget, and move forward with the governor’s cabinet confirmations,” Wright said in an email.

Supporters see the legislation and amendment as paths to justice for victims who lost the right to sue when they turned 18 or were young adults, depending on Pennsylvania state law at the time.

“The House has always led on this issue while the Senate sits on their hands,” Rozzi wrote in a text.

As of September 2020, eight other states, including New York and New Jersey, have passed laws allowing sexual abuse survivors a window to sue their abusers beyond the statute of limitations.

A brief history of how racism shaped interstate highways