In this April 5, 2021, file photo, Leanne Montenegro, 21, covers her eyes as she doesn't like the sight of needles, while she receives the Pfizer COVID-19 vaccine at a FEMA vaccination center at Miami Dade College in Miami. Nearly half of new coronavirus infections nationwide are in just five states, including Florida — a situation that puts pressure on the federal government to consider changing how it distributes vaccines by sending more doses to hot spots.

(Washington) — Nearly half of new coronavirus infections nationwide are in just five states — a situation that is putting pressure on the federal government to consider changing how it distributes vaccines by sending more doses to hot spots.

The heavy concentration of new cases in states that account for 22% of the U.S. population has prompted some experts and elected officials to call for President Joe Biden’s administration to ship additional vaccine doses to those places. So far, the White House has shown no signs of shifting from its policy of dividing vaccine doses among states based on population. 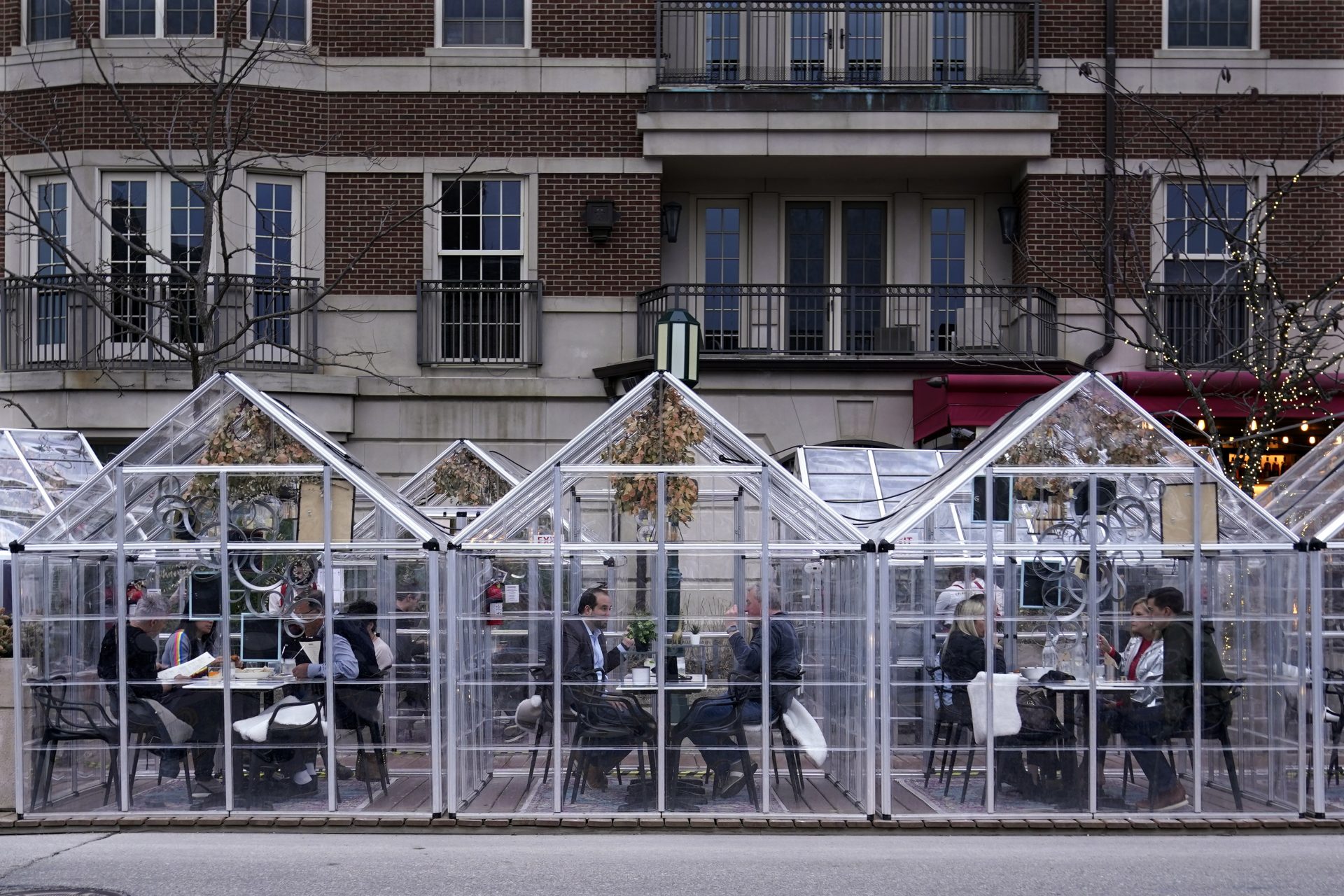 In this March 25, 2021, file photo, diners eat in isolated dining rooms outside the Townhouse restaurant, in Birmingham, Mich. Nearly half of new coronavirus infections nationwide are in just five states, including Michigan — a situation that puts pressure on the federal government to consider changing how it distributes vaccines by sending more doses to hot spots.

“You wouldn’t want to make those folks wait because they were doing better,” Geng said. “On the other hand, it only makes sense to send vaccines to where the cases are rising.”

The spike in cases has been especially pronounced in Michigan, where the seven-day average of daily new infections reached 6,719 cases Sunday — more than double what it was two weeks earlier. Only New York reported higher case numbers. And California and Texas, which have vastly larger populations than Michigan, are reporting less than half its number of daily infections.

Though Michigan has seen the highest rate of new infections in the past two weeks, Democratic Gov. Gretchen Whitmer has said she does not plan to tighten restrictions. She has blamed the virus surge on pandemic fatigue, which has people moving about more, as well as more contagious variants.

“Taking steps back wasn’t going to fix the issue,” Whitmer said as she got her first vaccine Tuesday at Ford Field in Detroit, home of the NFL’s Lions. “What we have to do is really put our foot down on the pedal on vaccines” and urge people to wear masks, keep their social distance and wash their hands.

Whitmer got the shot the day after Michigan expanded eligibility to everyone 16 and older. She asked the White House last week during a conference call with governors whether it has considered sending extra vaccine to states battling virus surges. She was told all options were on the table.

In New York City, vaccination appointments are still challenging to get. Mayor Bill de Blasio has publicly harangued the federal government about the need for a bigger vaccine allotment almost daily, a refrain he repeated when speaking to reporters Tuesday. 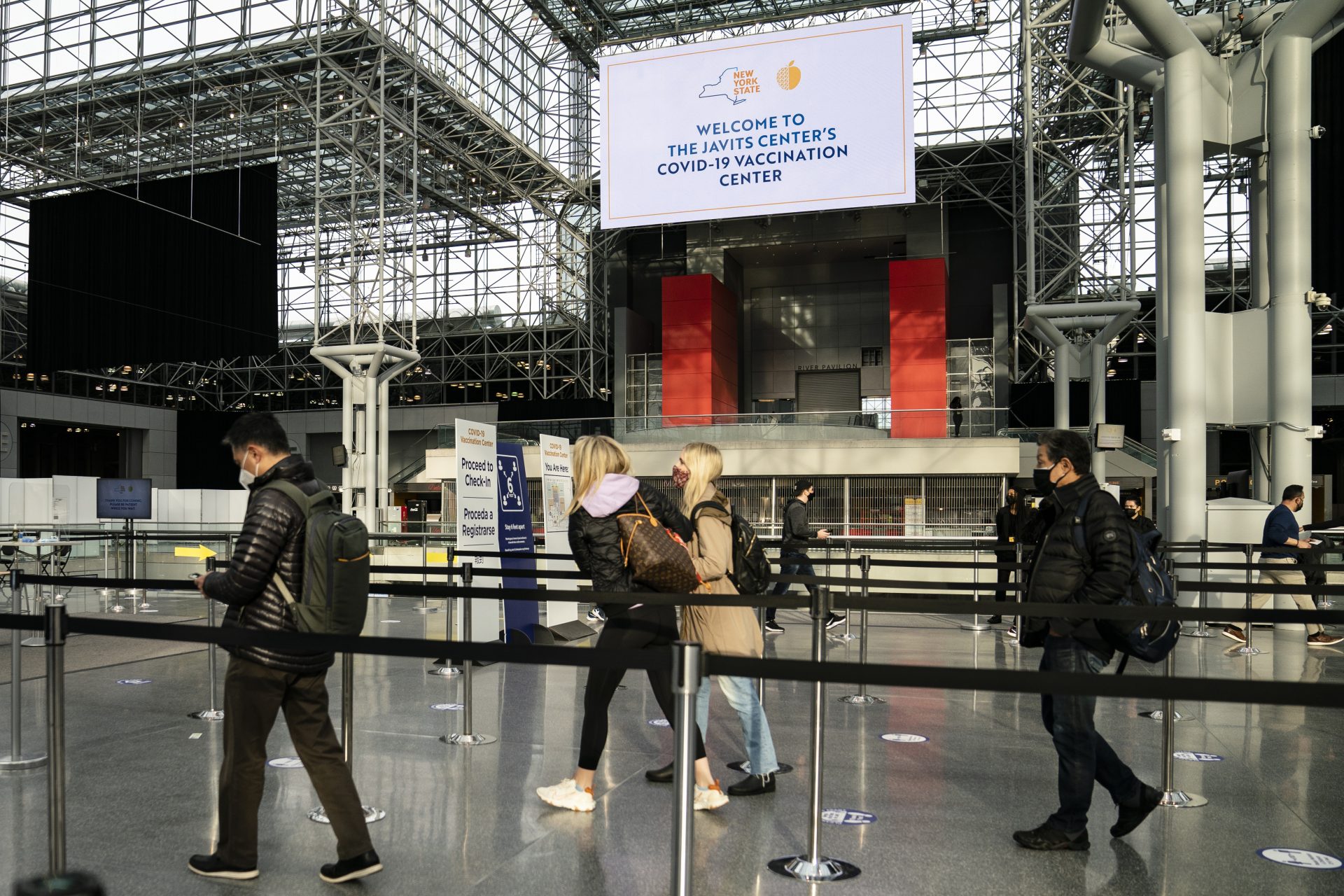 In this March 31, 2021, file photo, patients arrive for COVID-19 vaccination appointments at the Jacob K. Javits Convention Center in New York. Nearly half of new coronavirus infections nationwide are in just five states, including New York — a situation that puts pressure on the federal government to consider changing how it distributes vaccines by sending more doses to hot spots.

On the state level, Gov. Andrew Cuomo has not called publicly for an increase in New York’s vaccine allotment, even as cases ticked up in recent weeks and the number of hospitalized people hit a plateau.

In New Jersey, where the seven-day rolling average of daily new infections has risen over the past two weeks, from 4,050 daily cases to 4,250, Democratic Gov. Phil Murphy said he is constantly talking to the White House about demand for the coronavirus vaccine, though he stopped short of saying he was lobbying for more vaccines because of the state’s high infection rate.

Vaccine shipments to New Jersey were up 12% in the last week, Murphy said Monday, though he questioned whether that’s enough.

“We constantly look at, OK, we know we’re going up, but are we going up at the rate we should be, particularly given the amount of cases we have?” Murphy said.

New virus variants are clearly one of the drivers in the increase, said Dr. Kirsten Bibbins-Domingo, chair of the department of epidemiology and biostatistics at the University of California at San Francisco. Failure to suppress the rise in cases will lead to more people getting sick and dying, she said, and drive increases in other parts of the country.

“More vaccine needs to be where the virus is,” Bibbins-Domingo said, adding that people should get over the “scarcity mindset” that has them thinking surging vaccine into one place will hurt people elsewhere.

While many new infections appear to be among younger people, Salemi said he’s worried about Florida’s seniors. About 78% of residents age 65 and older have received at least one vaccine dose, but roughly 1 million more still have not gotten any shots.

“We seemingly have the supply,” Salemi said. “Are these people not planning to get vaccinated?” 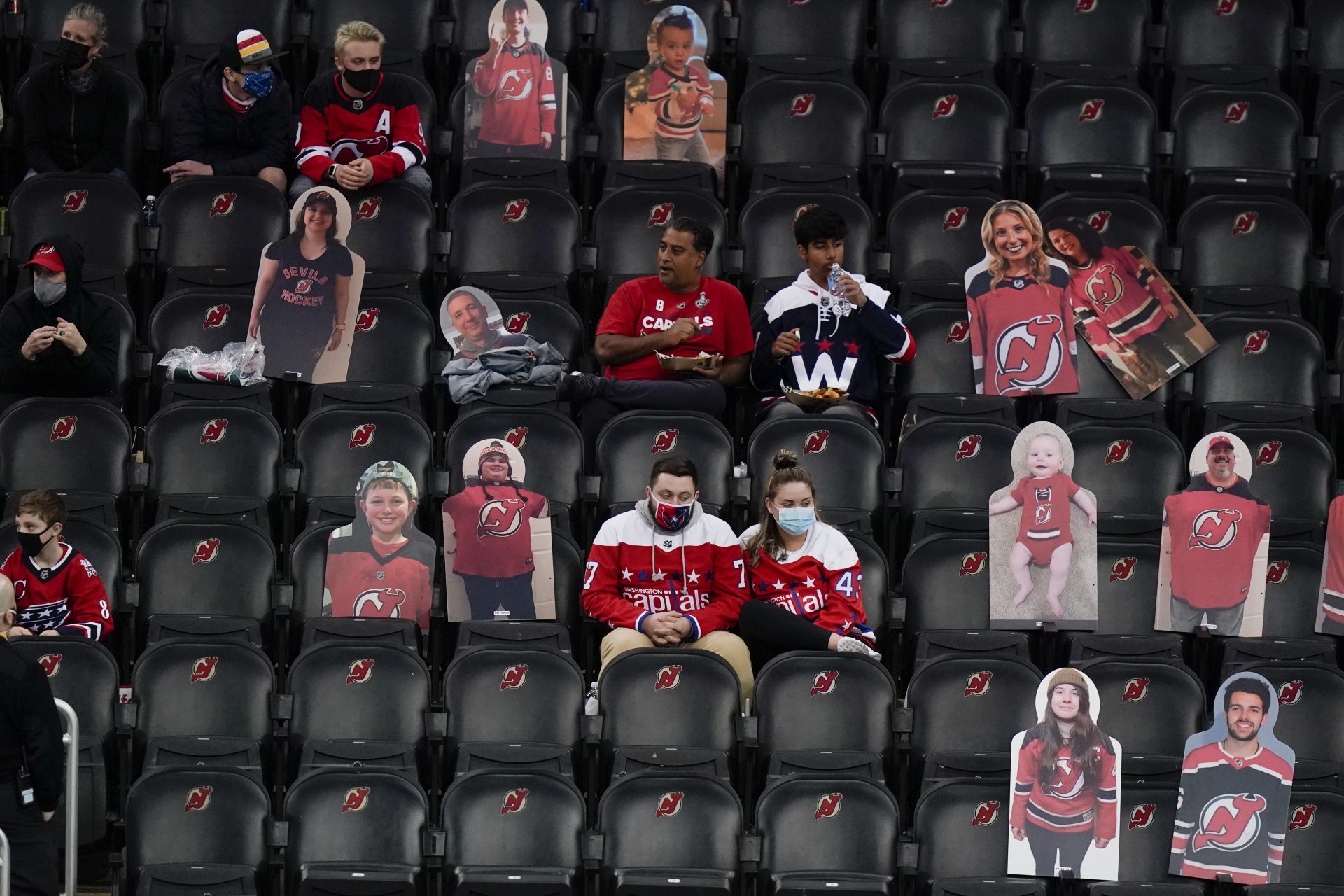 In this April 4, 2021, file photo, Washington Capitals fans sit among cutouts of New Jersey Devils fans as they watch the second period of an NHL hockey game between the Devils and the Capitals in Newark, N.J. Nearly half of new coronavirus infections nationwide are in just five states, including New Jersey — a situation that puts pressure on the federal government to consider changing how it distributes vaccines by sending more doses to hot spots.

Talk of sending extra shots to some states comes at a time when the number of daily infections in the U.S. has fallen dramatically compared to a January spike following the holiday season. However, the seven-day average of daily infections been rising slowly since mid-March.

The five states seeing the most infections stand out. As of Tuesday, 31 U.S. states were reporting seven-day averages of fewer than 1,000 new daily cases.

White House coronavirus coordinator Jeff Zients said Tuesday more than 28 million doses of COVID-19 vaccines will be delivered to states this week. That allocation will bring the U.S. total to more than 90 million doses distributed in the past three weeks.

The news came as Biden announced more than 150 million coronavirus shots have been administered since he took office, and that all adults will be eligible to receive a vaccine by April 19.

About 40% of U.S. adults have now received at least one COVID-19 shot, according to the Centers for Disease Control and Prevention. About 23% of American adults have been fully vaccinated — including more than half of Americans 65 and older.

Geng said the nation should take a step back and go slow. Even just a few more weeks of Americans sticking with social distancing and other precautions could make a huge difference.

“The take-home message here is, let’s not jump the gun,” Geng said. “There’s light at the end of the tunnel. We all see it there. And we will get there. Slow and steady.”