Locust Walk on the University of Pennsylvania campus.

College students in Pennsylvania are struggling to afford food, housing

“Their basic needs to feel safe and secure and have a roof over their head were not met."

(Philadelphia) — Nearly three in five college students experienced food or housing insecurity in 2020, according to a yearlong survey conducted by The Hope Center for College Community and Justice at Temple University.

“Their basic needs to feel safe and secure and have a roof over their head were not met,” said Sara Goldrick-Rab, founder of the Hope Center and a Temple sociology professor.

The Hope Center Survey is the nation’s largest annual survey on college students’ basic needs insecurity or BNI. The center defines BNI as a structural issue, the lack of an “entire ecosystem in place to ensure that students’ basic needs are met,” including nutritious food, safe housing, affordable technology and transportation, personal hygiene, and child care, according to the report.

In 2020, 195,000 students from more than 200 colleges and universities across the country responded to the survey — including students attending schools in Pennsylvania and Philadelphia — and provides one view on the impact of the pandemic on students’ lives.

A quarter of respondents attending a four-year university said they had cut their meal sizes or skipped a meal at least once within a 30-day period.

The most common obstacle respondents faced this year was not being able to afford rent, mortgage, or utility bills. The number of students who said they experienced housing insecurity in 2020 rose by almost 10% from 2019. 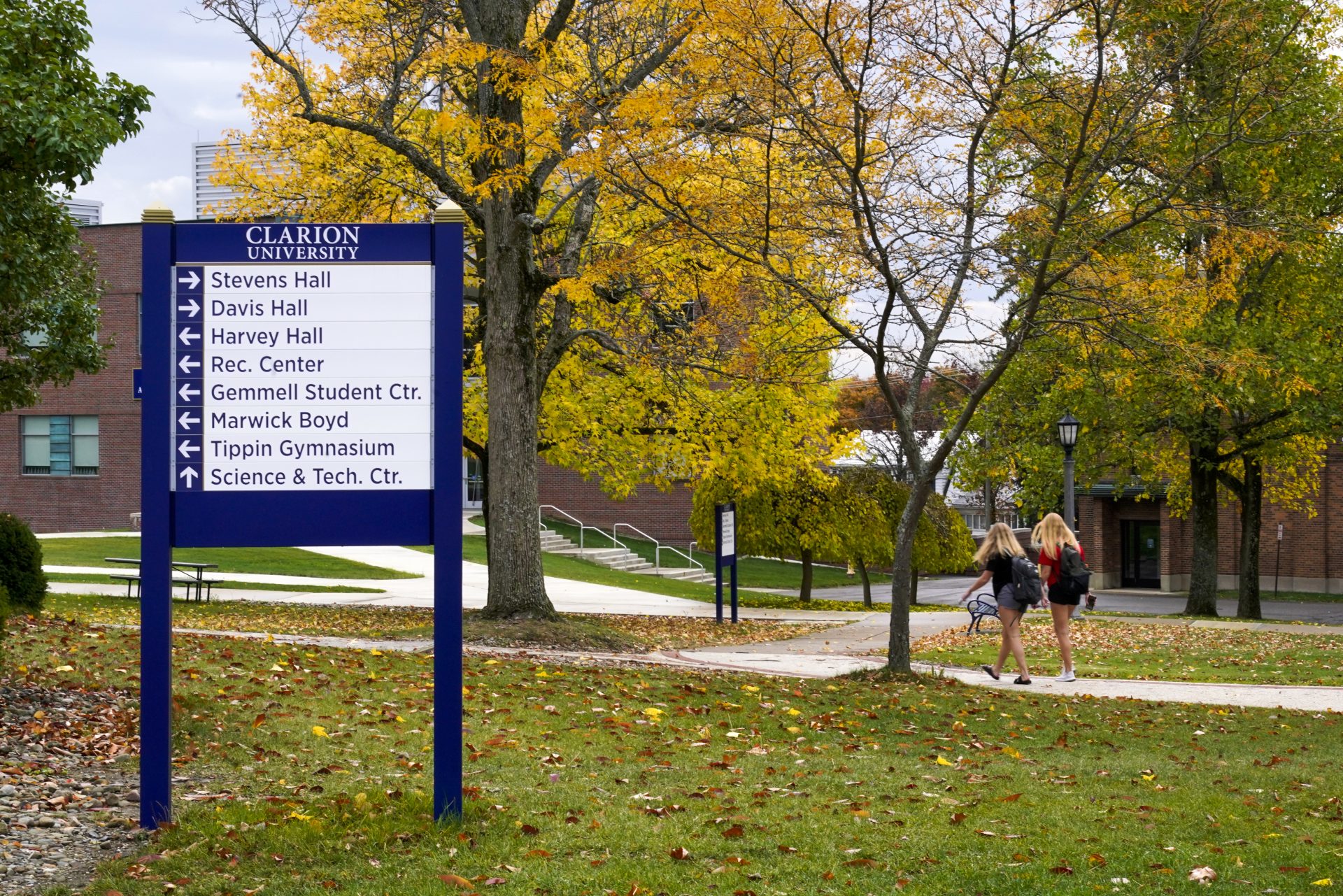 Students walk through the campus of Clarion University in Clarion, Pa, on Wednesday, Oct. 21, 2020.

Life circumstances, such as parenting or involvement in the criminal justice or foster care systems, also made an impact on students’ BNI.

The survey found Black, Latino, Indigenous, and Asian American and Pacific Islander students were disproportionately impacted by the pandemic, as measured by the loss of family members and jobs, and mental health issues.

About two in five students reported having lost a loved one to COVID-19. Black, Indigenous, and Latino students were twice as likely to have lost someone to the virus, the survey found.

The survey also saw a surge in college students’ mental health issues over the past year. Over half of respondents said they experienced at least moderate anxiety or depression in the spring of 2020, compared to one-third of students in 2019.

“I’ve never experienced so much stress in my life all at once,” said Temple senior Diamond Juggins. The 21-year-old said she struggled to afford rent after she was laid off from her retail job at Ross Dress for Less because of COVID-19. Before that, she was balancing full time school and work schedules.

Juggins did not receive unemployment money for months, and like many college students, did not qualify for the first rounds of CARES Act stimulus checks. Students who are claimed as dependents don’t qualify, even if they earn an income and file their own tax returns.

“I felt hopeless,” Juggins said. “How am I going to keep up with this? How? ‘Cause they make it so hard to make a living, to be able to have a college experience.”

She was forced to move home with her mom, two younger siblings, and an older sister, who has a disability.

Now that Juggins is home this semester, she said she has trouble focusing on school. She carries the weight of her family on her shoulders, often acting as a caretaker for her siblings while her mother is working.

But Juggins doesn’t have the option to move back to campus, unable to afford the rent while financially supporting herself.

She wishes that her professors would take these kinds of economic barriers into consideration. Some of Juggins’ professors have resisted when she’s asked for deadline extensions. She worries they assume she’s partying, though in reality, it’s quite the opposite.

“I go to bed early because I’m exhausted. I’m mentally drained. Some of us are going home to a lifestyle that is not healthy,” Juggins said. “I’m not able to succeed in this environment.”

Many of Goldrick-Rab’s own students at Temple are also having trouble getting through the day.

Instead of focusing on school, “all they can think about is where the next dollar is going to come from,” she said, adding that for those coming from Philadelphia neighborhoods with high poverty rates, it “makes it harder to find your way out.”

Goldrick-Rab said one of her students revealed to her that she was planning to drop out because she couldn’t afford her $70 heating bill, and was able to stay in school after she pointed the student to the right resources. 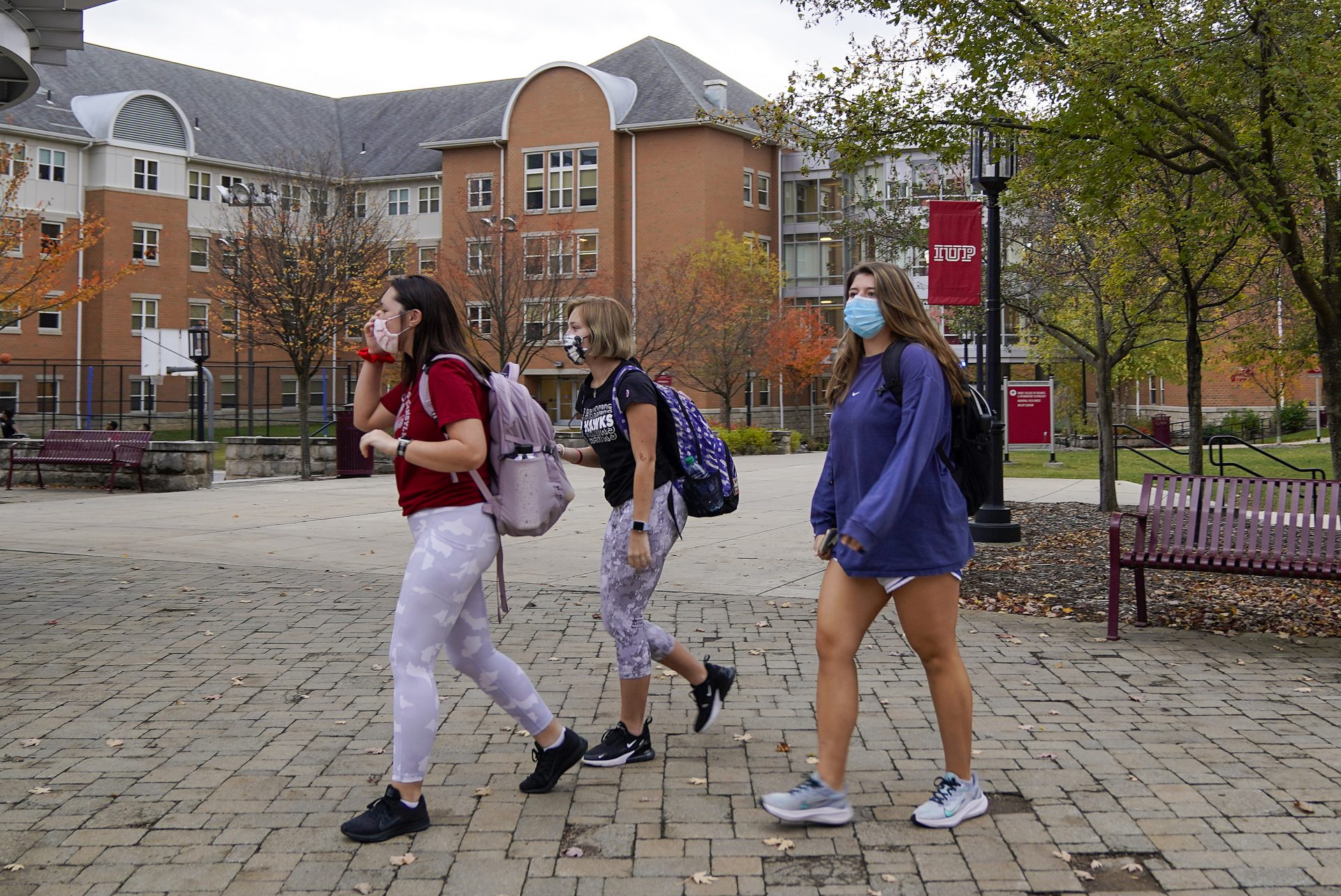 Students walk on the campus of Indiana University of Pennsylvania in Indiana, Pa, on Wednesday, Oct. 21, 2020.

And instead of teaching sociology, Goldrick-Rab said she often spent class time showing her students how to apply for SNAP benefits.

She explained that the inability to afford basic necessities relates to the lack of support systems for students, as well as institutional and state aid.

Over half of students who responded to the Hope Center Survey said they did not apply for financial support programs, like SNAP or FAFSA, because they did not know how.

“That’s part of program design. It’s called a ‘learning cost.’ It’s a form of administrative burden,” she said. “When it makes it hard for somebody to find out about something, in effect, it limits who gets help.”

Those who need the most help, end up getting the least, which cuts program costs, said Goldrick-Rab.

“[Programs have] so many different rules that you actually have to know somebody that knows how to work the program to get access to it. Then anybody who isn’t very well connected doesn’t get the access,” she said.

Philly has a model for how to help

A disproportionate number of Black and Native American students ended up dropping out of school in 2020, the Hope Center survey found.

Lower-income, as well as Black, and Latino students were far less likely to enroll in college after high school in 2020. In 2020, colleges lost about 400,000 new or returning students.

Goldrick-Rab would like to see a citywide effort to create an emergency aid fund for students.

She also thinks the city needs what she calls a “basic needs hub” on every college and university campus. These hubs can act as support centers for students, places where students can get help finding and applying for financial assistance programs.

The Single Stop office at the Community College of Philadelphia is a prime example of how these hubs would work. The office helps students apply for SNAP benefits and even finds them find child care, health insurance, and legal aid for those having issues with their landlords. But Goldrick-Rab said Single Stop needs to be equipped with more resources and staff.

Colleges and universities in Philadelphia could also have more meaningful relationships with pre-existing community organizations, such as Philabundance. Goldrick-Rab suggested that those organizations could start providing SNAP access on campuses.

In the end, Goldrick-Rab says students dropping out of school and not being able to afford life’s basic necessities hurt everyone in the city.

“If you’re a Philly resident and you’re going to drop out of college over a bill of 100 bucks,” she said, “everybody in this city loses.”